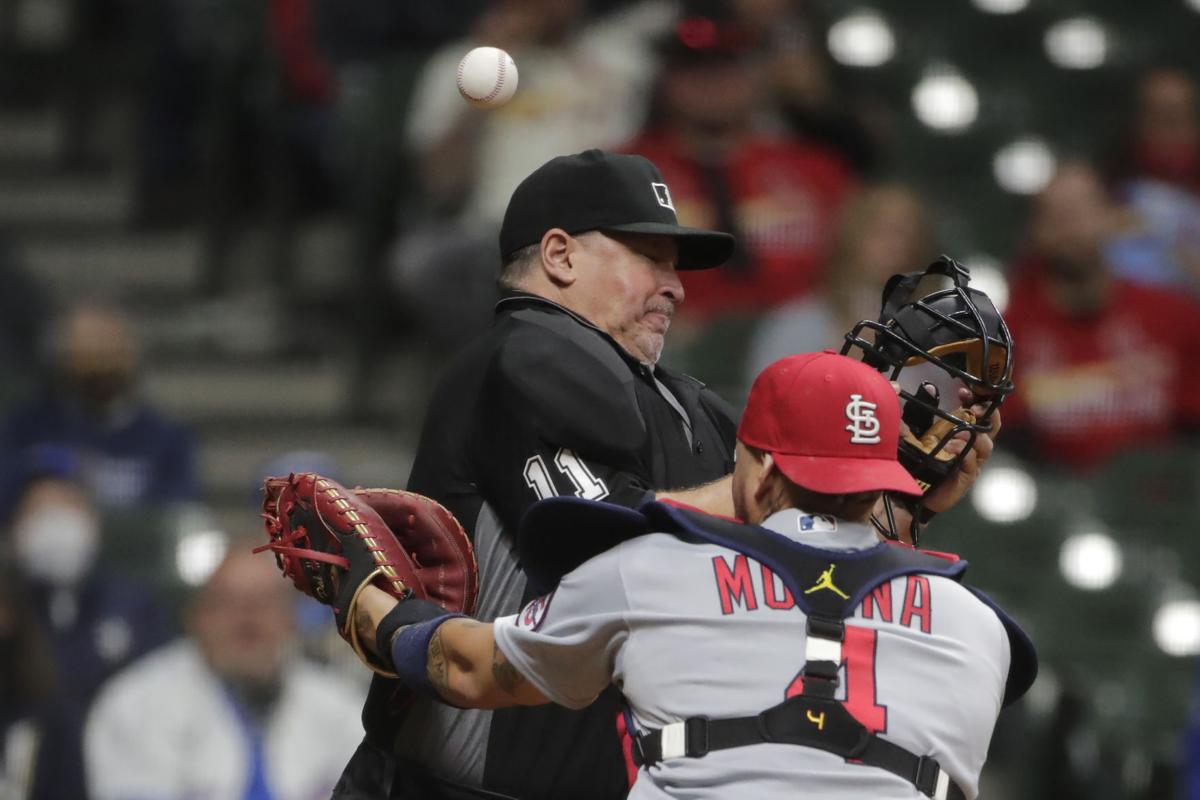 St. Louis Cardinals' Yadier Molina is unable to catch a bunt foul by Milwaukee Brewers' Freddy Peralta after colliding with umpire Tony Randazzo during the fifth inning of a baseball game Tuesday, May 11, 2021, in Milwaukee. (AP Photo/Aaron Gash) 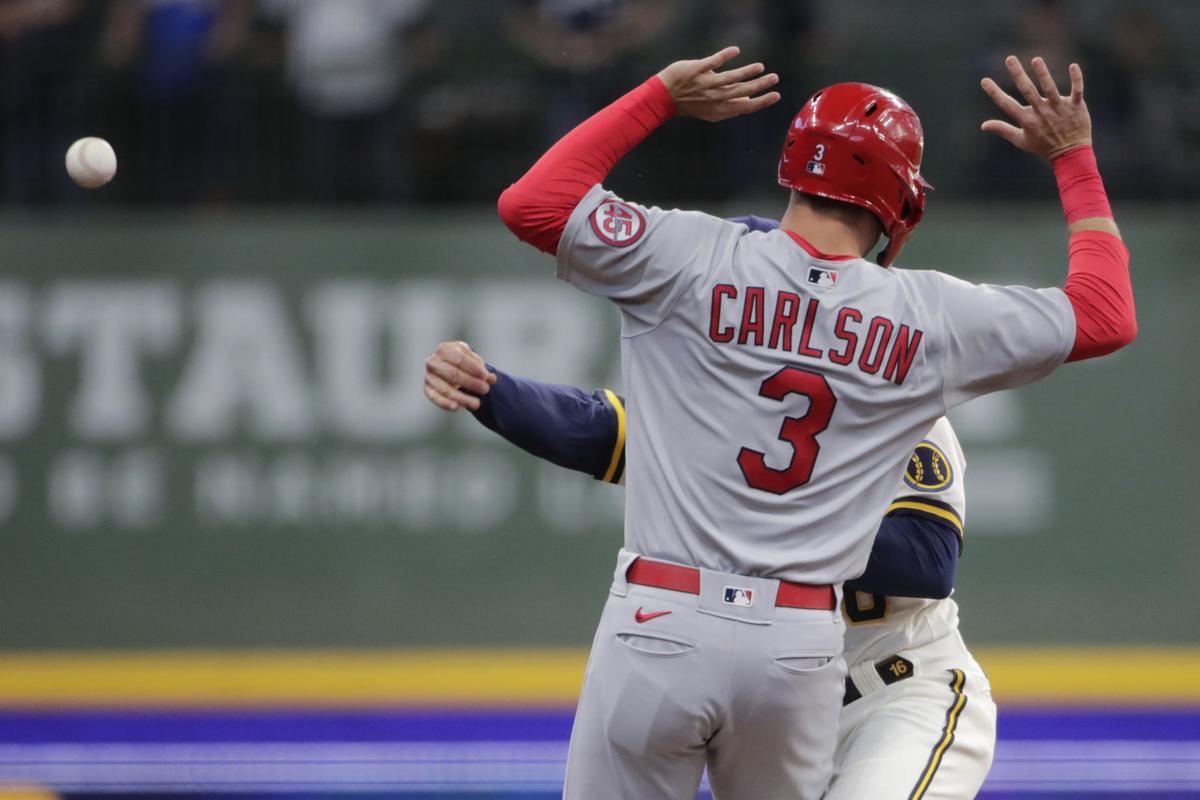 Milwaukee Brewers' Kolten Wong throws around St. Louis Cardinals' Dylan Carlson (3) during the first inning of a baseball game Tuesday, May 11, 2021, in Milwaukee. Carlson was safe at second base, and Paul Goldschmidt was out at first. (AP Photo/Aaron Gash) 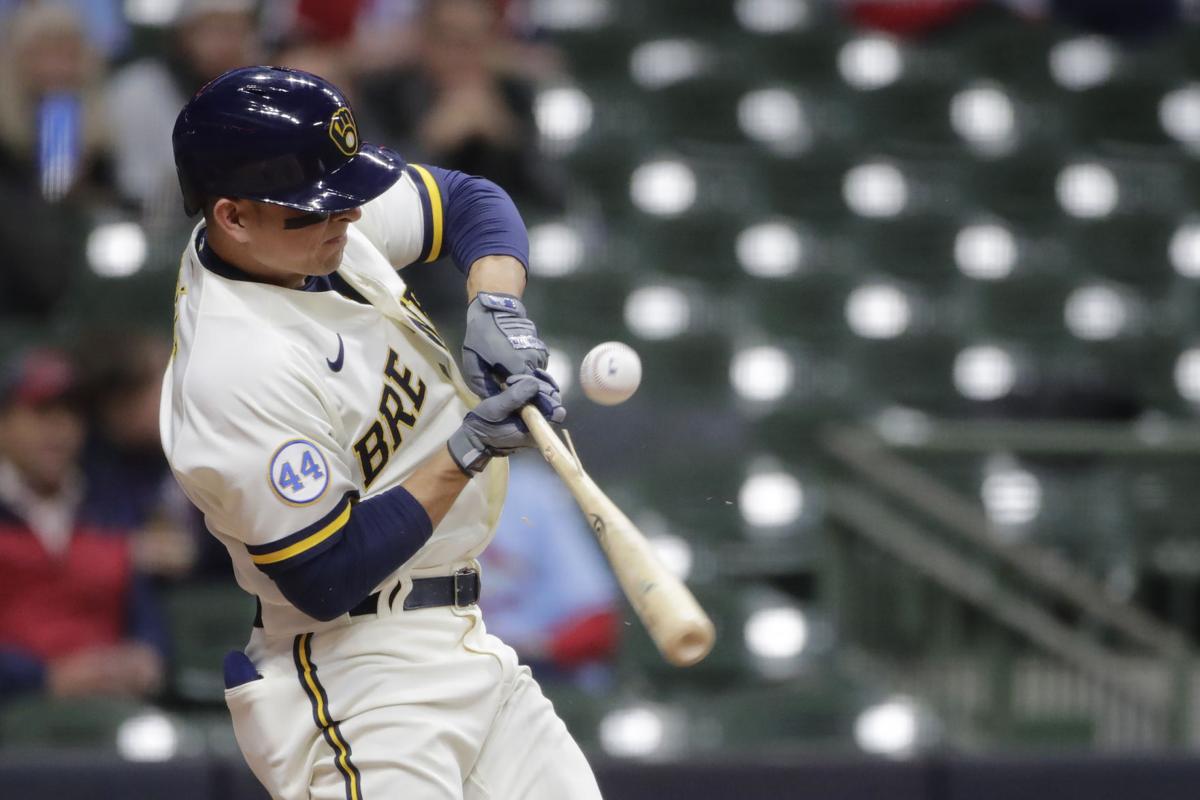 Milwaukee Brewers' Luis Urias breaks his bat as he pops out during the fourth inning of the team's baseball game against the St. Louis Cardinals on Tuesday, May 11, 2021, in Milwaukee. (AP Photo/Aaron Gash)

MILWAUKEE — Any offense the Cardinals generated Tuesday night for the first 10 innings happened almost strictly in the infield and that generally doesn’t win you many games no matter how well you pitch.

Lefthander Kwang Hyun Kim held the Milwaukee Brewers to one run over 5 1/3 innings and the Cardinals’ bullpen followed suit. But the Cardinals had only four base runners against Milwaukee starter Freddy Peralta through seven.

One was an infield hit by Tommy Edman off Peralta’s leg. That was the only hit off Peralta. The other three runners reached base on a walk, a hit batter and an error by Peralta.

But Harrison Bader’s leadoff single to left in the eighth against St. Louisan Devin Williams and Bader’s legs accounted for a run that tied the game at 1-1 on Dylan Carlson’s sacrifice fly. Bader had tagged up from second and boldly gone to third on Edman’s seeming routine fly to center fielder Lorenzo Cain, whose throwing arm didn’t scare Bader.

It was the Cardinals’ 98th win against just 68 losses against the Brewers at this facility, making for the best mark in majors by an opponent against Milwaukee here.

Although Goldschmidt increased his home run stats here, he said, “Those first few at-bats (two strikeouts, groundouts) weren’t too great. They got me out those four times pretty easily.”

By new rule of 2020, each team starts with a runner at second in extra innings. Edman was there in the 11th and he moved to third as Carlson grounded out. Then Goldschmidt needed only a fly ball but said he wasn’t necessarily thinking that way.

“I just try to take my normal at-bat,” he said, but noted that the infield was playing in with a man at third and one out.

“There’s a lots more holes out there (then),” he said. “That’s how I was taught earlier in my career. Just get your pitch and hit it hard and whatever happens happens.”

After that home run, Nolan Arenado doubled and backup catcher Andrew Knizner was hit by a pitch before O’Neill put the game under wraps. Cardinals manager Mike Shildt felt he had to run for Yadier Molina in the 10th once Molina had reached third.

Goldschmidt said he liked the extra-inning rule where there is a runner at second although he said he forgot for a moment that the Brewers would have a man at second, even when they were five runs down in the 11th.

“We’ve been part of 20-inning games, 18, 19-inning games . . . that’s not good for anyone,” Goldschmidt said. “It just kind of drags on, as good as the bullpens are. The fact that it shortens games, for the most part, is pretty good. It’s something different.

Multiple runs is the goal, said Goldschmidt, “because you almost assume the other team is going to get one run. That’s probably one of the reasons why you’re not seeing as much bunting in the top half of the inning.”

Sixth-inning doubles by Cain and Travis Shaw accounted for the only Brewers run off Kim, who still has not lost a major league game.

Alex Reyes, who gained the win as he escaped a bases-loaded spot in the 11th, did his best pitching the inning before when he was saddled with a runner at second and nobody out in a tie game.

But it was Bader who made it an extra-inning game. After his hit, he was at second as pinch hitter Matt Carpenter drew a walk on a full-count pitch after narrowly missing a double down the right-field line.

Edman flied to Cain and Bader took off for third, mindful of his pregame prep. “That’s just knowing your outfielder, knowing your opposition,” he said. “No outs, I’m trying to get to third as soon as possible.

“You’ve always got to be on the aggressive side. If he’s going to get me out, it’s going to have to be a perfect throw. I’ll take my chances there.”

There were all sorts of nuances in this one, including video coordinator Chad Blair saying it would be a good idea by the Cardinals’ staff to challenge a stolen base in the eighth by Tyrone Taylor because it appeared Taylor didn’t get to the bag on his first attempt with second baseman Edman’s knee in the way.

Carlson made a sliding catch in right to end the Milwaukee ninth after center fielder Bader had run down the previous two deep balls in the inning.

Shortstop Paul DeJong saved the fifth inning with a brilliant, diving stab behind second to rob his former keystone partner, Kolten Wong, who hit four balls hard and induced Shildt to walk him intentionally with one out and a runner at second in the 10th. Reyes then struck out Cain and Taylor.

“A lot of small things went well for us tonight,” said Shildt.

Bader smiled when it was brought to his attention that the Cardinals had only his hit to the outfield through 10 innings, yet ended up scoring six.

“It’s just relentless effort,” he said. “Going out there and playing until the umpire says there’s no more baseball.”

Where are the 2018 champion Memphis Redbirds now? They're crushing in the majors

A look at the lineup manager Clapp fielded, from opening day to the Triple-A championship, show the muscle the Cardinals' organization had and why it's scattered elsewhere.

Oviedo pitches well, but misplays by two veterans and Rizzo's 14-pitch at-bat that resulted in a game-tying homer flip game to Cubs in first day with full capacity at Wrigley.

'I do think we have to engage in that trade market,' executive says.

Whisked away at Wrigley: Martinez sharp, Cards' offense dull as Cubs sweep them to losing record

Reeling Redbirds now have lost 11 of their last 13 games.

Sinking feeling: Cubs walk all over Cardinals and spiral out of first place continues, drops them to .500

Five walks in the second turn into a five-run rally, short outing from Gant and the Cubs' 7-5 victory Saturday night. Cardinals have lost 10 of 12.

Hendricks makes his 22nd start against Cardinals and carries a 10-3 record and reputation for quick, short work of the rivals.

St. Louis Cardinals' Yadier Molina is unable to catch a bunt foul by Milwaukee Brewers' Freddy Peralta after colliding with umpire Tony Randazzo during the fifth inning of a baseball game Tuesday, May 11, 2021, in Milwaukee. (AP Photo/Aaron Gash)

Milwaukee Brewers' Kolten Wong throws around St. Louis Cardinals' Dylan Carlson (3) during the first inning of a baseball game Tuesday, May 11, 2021, in Milwaukee. Carlson was safe at second base, and Paul Goldschmidt was out at first. (AP Photo/Aaron Gash)

Milwaukee Brewers' Luis Urias breaks his bat as he pops out during the fourth inning of the team's baseball game against the St. Louis Cardinals on Tuesday, May 11, 2021, in Milwaukee. (AP Photo/Aaron Gash)