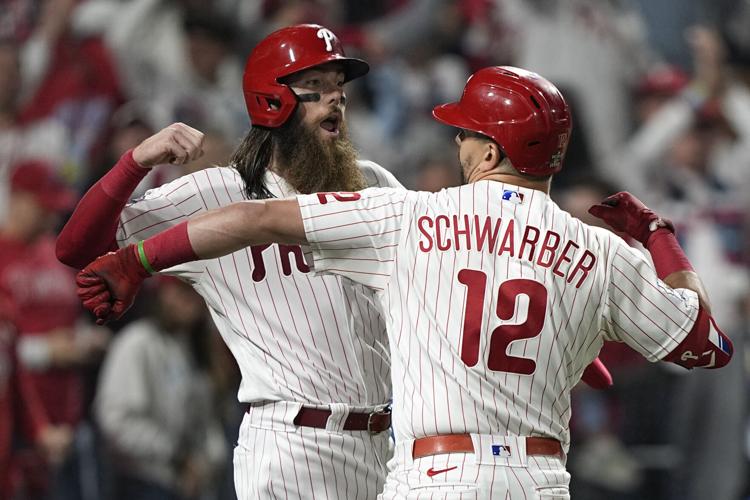 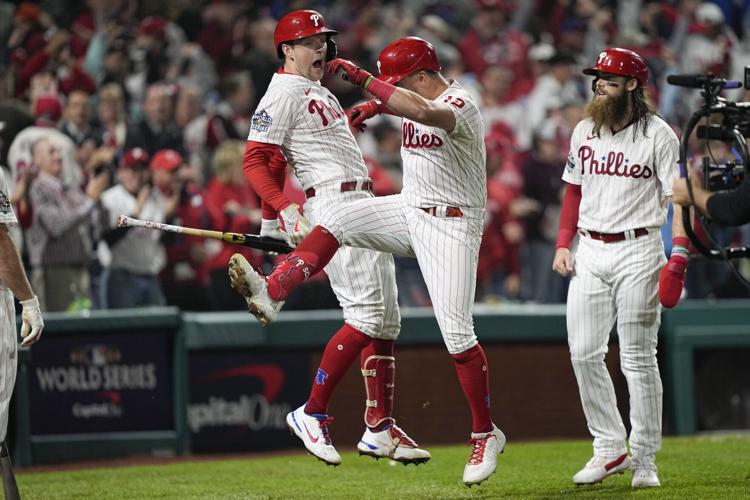 A recent game against Houston starter Lance McCullers Jr. had given the Phillies a feel for the shape of his pitches and eyewitness vantage of how he leans hard into his breaking pitches ahead of Tuesday’s Game 3 viewing. Scouting reports prepared by the Phillies’ staff had details on McCullers’ tendencies and specifically what he relies on in certain stressful situations. They knew to look for specific sequences when he reduced the use of his fastball, especially with runners base. And then he had to deal with that. Kyle Schwarber earned a six-pitch, leadoff walk, and by the end of it his teammates had seen each of McCuller’s breaking balls three times.

They had also noticed something else.

He was scraping at the fingers on his pitching hand, possibly picking at a nail, a Philly wasn't sure.

“Maybe if it’s not Kyle leading off, who knows if he even has to throw an off-speed pitch?”

After Schwarber’s walk, the next three Phillies to reach base homered, five of the first six Phillies’ hits were home runs, and before McCullers’ got sixth out he was down by five runs on the way to a 7-0 loss at Citizens Bank Park. The Phillies’ tied a World Series record and forced McCullers to set one. The five home runs hits by five different Phillies match the previous high for any other World Series game. McCullers is the first pitcher in World Series history to allow five home runs in one game.

He had not allowed one to any of the previous 47 batters faced this postseason.

In their first home World Series game since 2009, the Phillies claimed a two-games-to-one lead in the best-of-seven Fall Classic. How they’ve gotten this far into the postseason offers a hint of how likely they are to close out the series before it returns to Houston for the weekend. The Phillies are 6-0 at home this season. They’ve scored 42 runs in those six games, and they’re out-homering opponents 17 to six at the Bank. They have 22 homers in the postseason.

“It’s contagious. It’s contagious,” first baseman Rhys Hoskins said. “I feel like we’ve had some of these games through the course of the year and they come in bunches. They always seem to be that we can leave the yard at any moment in the game. Anyone in the lineup can and that’s a scary thing for the opposing team. … We score runs in a hurry. And that type of fear is something that’s great to have as an offense.”

On the last pitch at home he saw in the National League Championship Series, Harper hit a home run that put the Phillies ahead for good in the clinching game.

On his first pitch at home of a World Series game, Harper hit a home run that put the Phillies ahead for good in the opening game of a three-game stop.

Four of Harper’s six homers in the playoffs have put the Phillies ahead.

“He throws that slider and that curveball heavy, but at the same time, I didn’t want to get beat by anything else,” Harper said. “So I just tried to see the best pitch.”

Harper sent a knuckle curve 402 feet away to give the Phillies’ a 2-0 lead four batters into the game. In the second, Harper, the designated hitter, motioned for Bohm to walk over from the on-deck circle. Set to leadoff the second inning, Bohm listened to Harper and then went to the plate. He jumped the first pitch of the inning for a 373-foot home run.

He got a sinker and did not miss it.

Bohm played coy about his exchange with Harper.

“Nothing,” Bohm said of what Harper told him.

Asked if that nothing helped in his at-bat, Bohm smiled.

“I don’t now what Bryce told Bohmer,” Hoskins said. “Obviously, it worked. I’m going to tell him to tell him more.”

Three batters after Bohm hit the milestone World Series homer, No. 9 hitter Brandon March bent a solo home run toward the seats beyond right field. A young fan got a glove on the ball, almost snagged himself the 1,001st home run in World Series, but the ball caromed back onto the field of play. A review confirmed March’s home run, though he was already certain by the reaction of the Astros’ fielders that the ball had cleared the fence.

But he had a moment of doubt.

The Phillies were built for what Marsh called “juice.” Acquisitions of Schwarber and Castellanos called into question the Phillies’ defensive plans in the outfield but left little doubt what kind of lineup they wanted to have. Less cheese, more steak. They were beefing up to bludgeon teams with runs, winning 13-11 if necessary, especially on the cozy campus of Citizens Bank Park. The Phillies ranked fifth in home runs at home (107) this past season, and they were one of seven teams with at least 200 homers this season.

Six of those seven teams reached the postseason, and the one that did not finish one game behind the Phillies for the final spot in the National League bracket.

Power plays up an octave in the postseason.

“I think it’s the constant pressure that it puts on the pitcher understanding the capability that everybody has to put the ball over the fence,” Castellanos said. “There’s very little breathing room for opposing pitchers. Right now, baseball is rolling for us. And hitting is contagious and right now everybody is happy and in a good mood. It’s somebody different every night. Bryce most nights.”

Down 4-0 after Marsh’s homer, McCullers retired six consecutive batters to get the game into the fifth inning. Emboldened – or blinded? – by the third and fourth inning, Houston manager Dusty Baker remained with McCullers. He wanted at least another inning. Baker would not get it. Four innings after his walk was prelude to Harper’s power, Schwarber followed a single by Marsh with the biggest blast of the game.

Schwarber got a changeup and launched it 443 feet to center field, carrying over the greenery for the 1,002nd home run in World Series history.

Five pitches later, Hoskins got a slider he hit for the 1,003rd homer.

The Phillies’ fifth of the night.

“I couldn’t get anybody loose,” Baker explained. “It was my decision.”

Hoskins’ homer and record-tying fifth came on the final pitch McCullers threw. Of the 78 pitches he sent toward the Phillies, 52 were strikes, and nearly 10% of those were sent away, over the wall for potential souvenirs.

The Phillies had 1,950 feet of homers by the end of the fifth.

The Astros had produced four baserunners.

“A lot of boppers in this group,” Marsh said. “They’ve got the ability to change the game with one swing. They definitely mean a lot more (in the playoffs).”

Every Astro, even rookie Jeremy Pena who was drafted in 2018, came to the plate to boos because Houston’s implication in a sign-stealing caper that involved the use of high tech to decode opponent’s signs and driveway pragmatism to bang on a trash can to relay the information to the hitter. The confirmation of such intricate and damning measures during 2017 and a World Series championship, meant suspensions for two managers and virtual exile from the game for general manager Jeff Luhnow. The Astros had yet to play in Philadelphia since the scandal, and the faithful crowd of 45,712 were ready.

The booed each Astro individual.

They serenaded leadoff hitter Jose Altuve and third baseman Alex Bregman with chants of “Cheater! Cheater! Cheater!” Their commitment to the criticisms peaked in the middle innings and then as the score widened, the game closed, and the reality of being two wins away from a championship took over, steering the home crowd to cheer for the locals instead of jeer for the visitors. By the sixth inning, it did not matter the specifics of what Harper said to Bohm or the creativity of the heckling of the Astros, or even if McCullers was giving away his pitches. The Phillies led by seven, got a strong start from lefty Ranger Suarez, and did not have to utilize their late-game relievers.

The lead was that sturdy, that predictable.

Everyone at the ballpark could see what was coming.

Hummel: Is pitching depth beyond 2023 a problem worth addressing?

The series will be pushed back a day, with Friday serving as a travel day and Game 7, if necessary, coming Sunday in Houston.