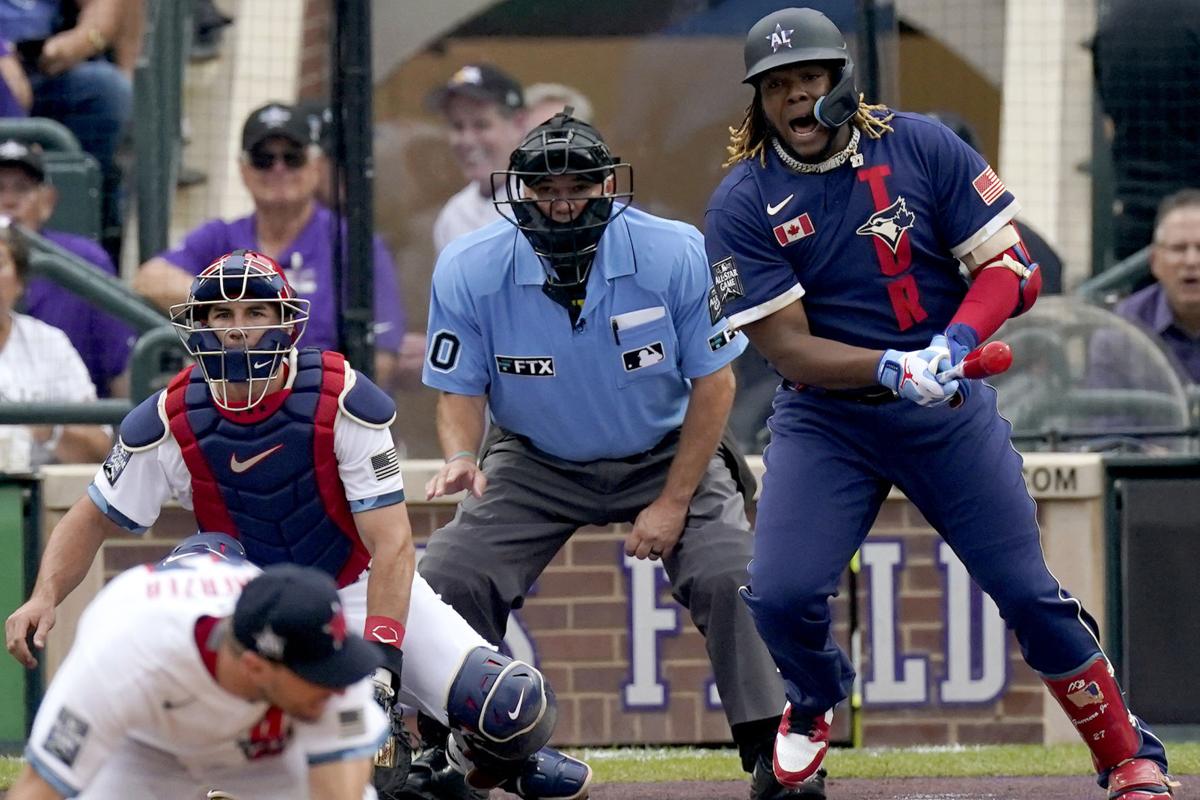 The American League's Vladimir Guerrero Jr. lines a ground out to second base as National League starter Max Scherzer tries to avoid being hit during the first inning Tuesday night. Guerrero homered in his second at-bat. 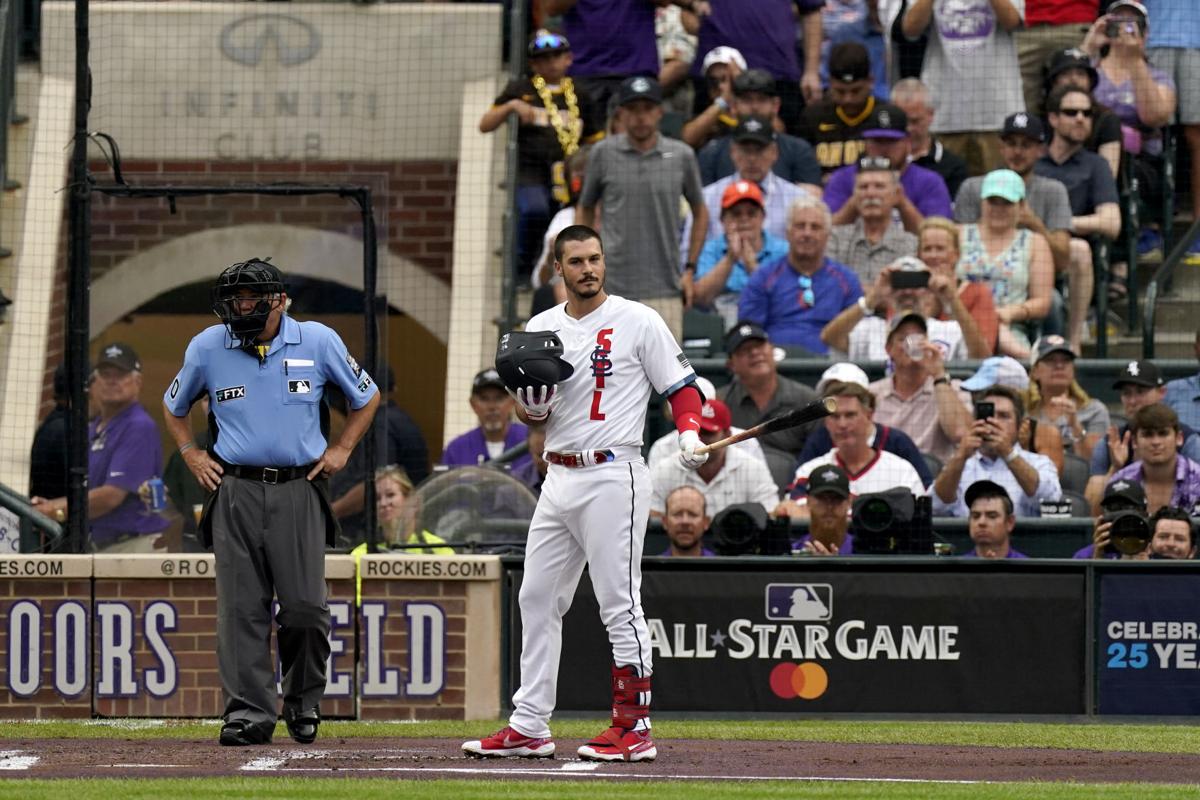 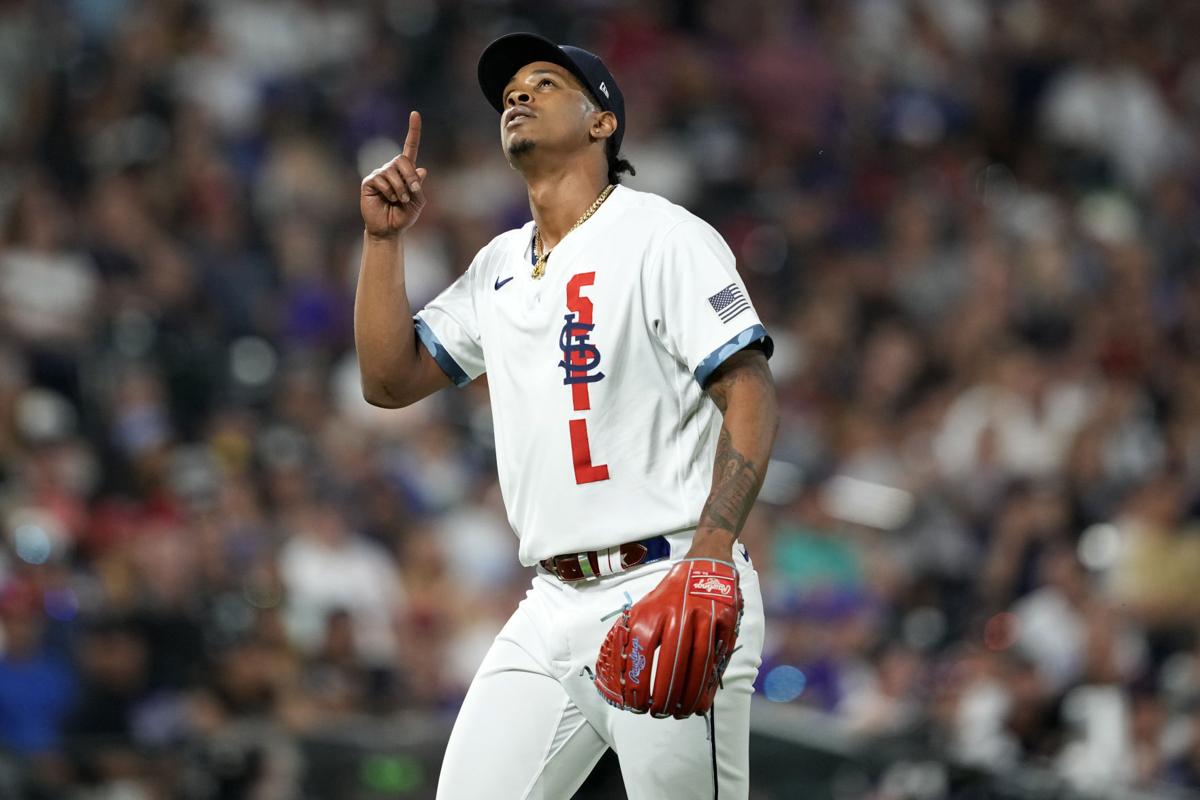 National League's Alex Reyes, of the St. Louis Cardinals, points upward after an out during the eighth inning of the MLB All-Star baseball game, Tuesday, July 13, 2021, in Denver. (AP Photo/David Zalubowski)

DENVER — The 91st All-Star Game was supposed to be held in Atlanta Tuesday night but was moved by Major League Baseball three months ago to Coors Field after a new, controversial voting law was established in Georgia. Immediately, came visions of a slugfest like the 13-8 score in the 1998 All-Star Game here.

There was some slugging Tuesday but more of it was by the American League, which had home runs by Most Valuable Player Vladimir Guerrero Jr. of Toronto and Tampa Bay’s Mike Zunino in a fairly quiet 5-2 win over the National League. The victory, the AL’s eighth in succession, extended the Americans’ advantage in the series to 46-43-2 as the National League had only one extra-base hit besides a homer by J.T. Realmuto and stranded five runners in scoring position in the final four innings.

Defense wasn’t a big factor for much of the evening but the key play of the night was made by first baseman Jared Walsh of the Los Angeles Angels, who was sent out to play left field. Chicago Cubs slugger Kris Bryant, who had fanned with two men on in the sixth, came to the plate with a chance to pull his team even or close to even in the eighth. With the bases loaded against Boston’s Matt Barnes, Bryant got ahead at 3-0 and, hitting away, sent a rocket to left where Walsh made a diving catch.

Walsh, as it turns out, hadn’t played an inning in left field all season and hadn’t appeared in the outfield at all since April when he played some right field.

“I don’t think he was too thrilled about going out there,” said American League manager Kevin Cash of Tampa Bay. “He was a little nervous.”

Before the game, when Cash had told Walsh he might be in the outfield at some point, “he looked at me like I had two heads,” related Cash.

Many in the sellout house of 49,184 had expected some fireworks from novel, two-way player Shohei Ohtani of the Angels. The righthanded-throwing Ohtani pitched a perfect first inning, gaining credit for the victory, but the lefthanded-hitting Ohtani grounded out in his only two at-bats after competing in a long Home Run Derby round the night before.

Washington’s Max Scherzer, the National League starter, retired Guerrero Jr., on a grounder to the second baseman in the first. But the smash up the middle nearly hit a dodging Scherzer in the head, for which Guerrero Jr. apologized by hugging Scherzer on his way back to the dugout.

Through a translator Guerrero Jr. recalled a conversation the two had had the night before. “He was joking with me and said ‘Take it easy with me tomorrow,’” said Guerrero.

Ohtani’s first inning ended with Coors favorite Nolan Arenado, a Colorado Rockies star for eight years who now is a Cardinal, tapping to shortstop. Arenado also grounded out in his only other at-bat.

Cardinals reliever Alex Reyes, one of 42 first-time All-Stars, relieved in the eighth and allowed a bloop single before forcing Kansas City’s Whit Merrifield to ground out and throwing 98 mph gas past Zunino for his first All-Star strikeout after which Reyes pointed to the sky in exultation.

“You’re putting God first,” said Reyes. “I do it every outing after I come off the mound. He’s helped me so much and I believe a lot in God.”

Reyes said he had been told he might come into the game as early as the second or third inning “if there were some hiccups.” As it was, he relieved San Diego’s Mark Melancon after the latter had walked one hitter and struck out another in the eighth.

Joey Wendle of Tampa Bay greeted Reyes with the bloop hit. “I would have been disappointed if it was a walk,” said Reyes, who has had more of those than he would like this season. But the strikeout took care of that.

“It felt good to get that fastball by him,” Reyes said. “We started him off with two sliders that kind of got him off of the fastball.”

Except for the final score, there was no downside for Reyes. “Not at all,” he said, smiling.

The National League pitchers struck out 12 hitters and the American Leaguers only three. Usually the team with 12 wins.

The Americans took a 1-0 lead in the second off Milwaukee’s Corbin Burnes with Boston’s Rafael Devers delivering a double to set up the inning.

Former Cardinal Lance Lynn of the Chicago White Sox, throwing all fastballs or a variation of same, survived a two-out walk to Cincinnati’s Jesse Winker in the Nationals’ second before striking out Philadelphia’s Realmuto.

Guerrero, who has 28 regular-season homers and a league-leading 73 runs batted in, didn’t risk hurting anybody in his second at-bat, except somebody in the bleachers when he walloped a 468-foot homer to left center off Burnes to raise the NL lead to 2-0 in the third. Guerrero’s Hall of Fame father hit one All-Star homer.

“Oh, my God. It was a moonshot,” said San Diego shortstop Fernando Tatis Jr. “He’s been doing it all year. Why not show it off here?”

Guerrero Jr., said, “Dreams come true. Ever since I was a kid, I was thinking about this moment.”

Guerrero Jr., knocked in his second run on a groundout in the fifth after Toronto’s Teoscar Hernandez doubled off the right-field wall and Cedric Mullins of Baltimore was safe on an error by San Francisco shortstop Brandon Crawford. Xander Bogaerts then poked a single to right against Miami lefthander Trevor Rogers and it was 4-0.

Realmuto homered to right center, a 430-foot drive, off Detroit lefthander Gregory Soto in the fifth but the Nationals still trailed 4-1.

Backup catcher Zunino, a .198 hitter for Tampa Bay although he has 19 home runs, got that run back in the sixth off the New York Mets’ Taijaun Walker with a 433-foot drive to the opposite field in right.

Zunino’s passed ball with Oakland’s Chris Bassitt pitching in the Nationals’ sixth provided the Nationals’ second run. Former Cardinal outfielder Adolis Garica, now with Texas, also committed an error in the inning. Garcia then fanned on three pitches against Milwaukee’s Freddy Peralta in the American League seventh although Garcia hustled a single into a double in his second at-bat in the ninth.

'As players, we want to put the best product on the field, the best version of the game we can,' said former Cardinals reliever Andrew Miller.

Owners vote to lock out players after an agreement on a new Collective Bargaining Agreement could not be reached by Wednesday. Moves, meetings freeze.

Lefthander on 1982 World Series champions is one of six elected through Era Committees process.

Flaherty, O'Neill, Gallegos, Bader all likely to get big raises.

Lefty signs a four-year, $44-million deal that installs him as part of Cardinals' rotation.

Agent traces current trend of teams bailing on seasons, sinking for better draft picks to 2012 and says practices "eroded the integrity" of the 2021 season.

Buck O’Neil, a champion of Black ballplayers during a monumental, eight-decade career on and off the field, joined Gil Hodges, Minnie Miñoso a…

The American League's Vladimir Guerrero Jr. lines a ground out to second base as National League starter Max Scherzer tries to avoid being hit during the first inning Tuesday night. Guerrero homered in his second at-bat.

National League's Alex Reyes, of the St. Louis Cardinals, points upward after an out during the eighth inning of the MLB All-Star baseball game, Tuesday, July 13, 2021, in Denver. (AP Photo/David Zalubowski)