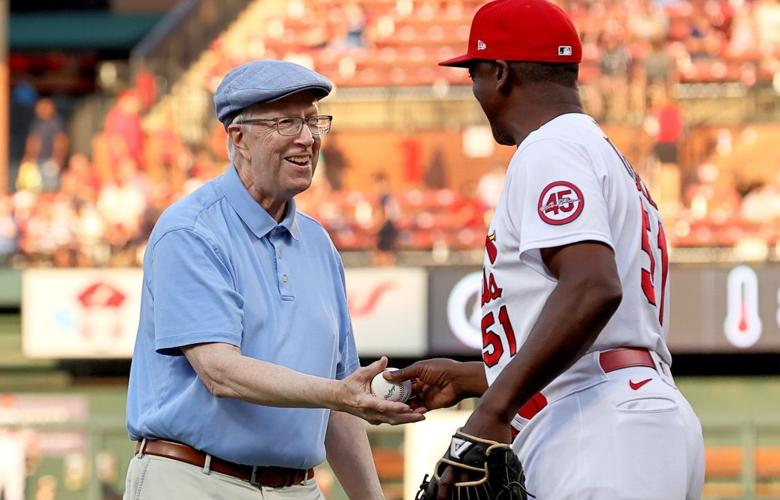 Post-Dispatch sportswriter Rick Hummel is greeted by Cardinals coach Willie McGee after throwing out the ceremonial first pitch before a game against Atlanta on Aug. 4, 2021, at Busch Stadium. 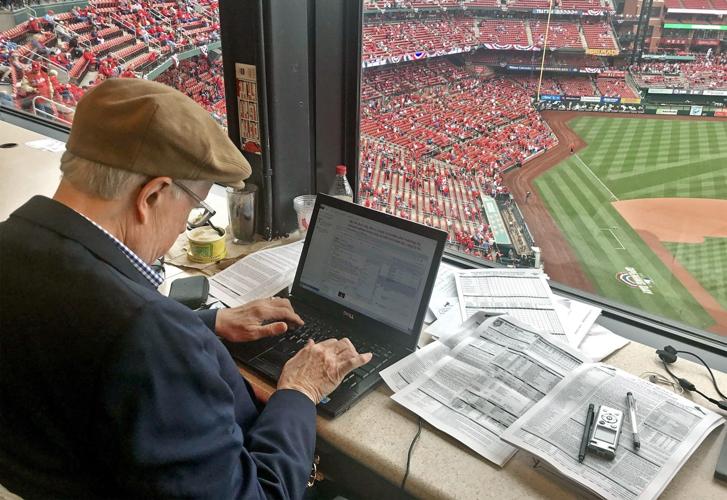 Rick Hummel works in the Busch Stadium pressbox that has been named for him and one of his mentors, Bob Broeg. 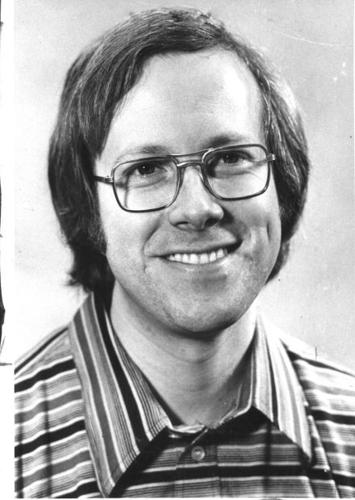 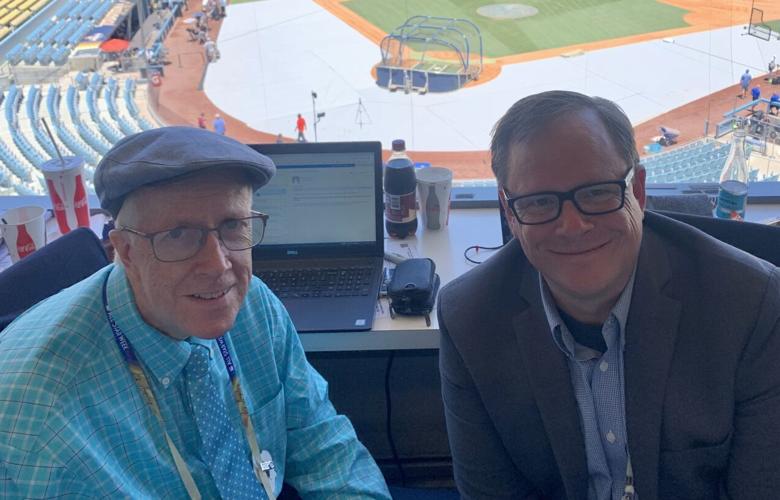 Hall of Fame baseball writer Rick Hummel, left, is seated in the Dodger Stadium pressbox to cover the 2002 All-Star Game. Alongside is Post-Dispatch colleague Derrick Goold.

It's the end of the line for Albert Pujols, Yadier Molina and maybe Adam Wainwright. But there's another fellow who is closely associated with the Cardinals — and for a period much longer than any of those players even has been alive — who this weekend also will be on the job at a Cards home regular-season series for the final time.

Rick Hummel, who is in his 50th season writing about the team and his 51st year at the Post-Dispatch, plans to step down from full-time duties at the paper in the offseason. That will be not long before he turns 77 in February.

That's when spring training begins, and while Hummel might go there as an occasional contributor to the P-D, he will be out of the regular mix for the first time since before he had his initial Cardinals assignment in 1973. Five years later, he took over the beat full time.

He remained on it through the 2001 season before becoming the paper's national baseball writer — not by his choice. But he later returned to a role that focuses on the Cardinals, though as the backup to Joe Strauss and now Derrick Goold.

His current position calls for him to often do stories ancillary to game coverage, but he is the "lead ballwriter" (writing the game stories) for some contests and will be in that role this weekend when the Pirates play at Busch. It will be his final time in that slot, as Goold will cover the team's season-ending trip to Pittsburgh next week. Goold also will have the "gamer" writing duties during the postseason, during which Hummel will cover other angles.

Will it seem strange on Sunday to walk into the Busch Stadium pressbox — which is named for him and one of his mentors, former Post-Dispatch baseball writer and sports editor Bob Broeg — for the last time to handle the game-writing duties?

"I don’t think it will," said Hummel, who has covered 42 All-Star Games and 35 World Series and was inducted into the writers portion of the Baseball Hall of Fame in 2007. "It’s more likely to hit when I'm not covering the first game next year. There probably won’t be any difference until you get to next season."

He has been honored with cake and applause in some of the out-of-town ballparks he has been in but chuckled while saying, "It isn't exactly like the Pujols-Molina tour," in which they have been showered with gifts on the road. "A lot of people don't even know it's my last season."

"The Commish," the nickname by which he is widely known, is going out with an unexpected bang. Not only has the team won the National League Central Division title but the city has become obsessed with the Pujols story in which his return to St. Louis has turned into much more than a ceremonial reunion.

His unexpected surge in recent months, in which he reached the 700-homer milestone, has led to what Hummel calls a season that has "been active" for him to cover.

"I didn’t know we were going to have all this 'Pujolsmania,'" he said. "Even when he wasn’t hitting, he still was contributing as a mentor ... then he took off and it made you remember how good he was 10-12 years ago. He’s been just about as good the last two or three months as he was then."

Hummel can look back, too, on the drastic ways the media business has changed since he began working. The newspaper used to be his only focus, with its once-a-day deadlines. But as papers' websites have supplanted the printed product in timeliness over the past couple decades, sites such as the Post-Dispatch's STLtoday.com have a relentless round-the-clock news cycle that must be fed. There also are podcasts, video presentations and online chats. And of course the print product still must be supplied with content.

"There is much more of a workload for our jobs now," Hummel said. "It’s a 24-hour-a-day operation, and I don’t want to work all 24 hours. So it's time (to retire). I don’t know if I was doing the paper as much good as somebody younger could."

A lot of his colleagues would dispute that, especially with the background he brings to the job.

"Obviously it’s hard to even think about the Cardinals beat without Rick Hummel — his institutional knowledge of the organization and the game, the sources he has made all around Major League Baseball through the years and his tireless work ethic season after season," Post-Dispatch sports editor Roger Hensley said. "Fortunately for me, I’ve gotten to work more than 20 years with 'Commish' in his 50-plus years at the Post-Dispatch."

Hummel began covering the Cardinals when Red Schoendienst was the manager, and was on the beat during Whitey Herzog's tenure in the 1980s —  when the team went to the World Series three times and won in ’82.

“I love being with people who love their job, and he certainly does,” Herzog said last year in an extensive profile of Hummel's career on these pages. “He loves the game; he’s very knowledgeable. I couldn’t have had a better beat writer for those 10 years, I was very fortunate to have him as my beat writer."

Hensley has a similar feeling about Hummel.

"He’s grown to mean a whole lot more to me than the pearls of wisdom he puts on paper," Hensley said. "He’s a great friend and confidante, someone I have always been able to count on to roll with the changes as our industry has changed. And he’s been a great mentor to many young writers that have come through our doors, and I’m sure around the industry as a whole, too."

One of those who has flourished under Hummel's tutelage is Goold, who now has Hummel's former job as the Post-Dispatch's lead Cardinals reporter.

"He means the world to me," Goold said, adding that he "wouldn't know what great baseball writing is if I didn't have his guidance — his bar to try and reach."

While Hummel will be leaving his full-time post at the Post, he plans to continue coverage of the team on a piecemeal basis next season.

"He’ll be doing some freelance writing for the paper and STLtoday.com," Hensley said. "That’s good for me ... and great for the readers. We’ll figure it out a bit as we go along, but rest assured you’ll still be seeing that byline that so many have read over the years. He’s truly one of a kind."

Hummel is looking forward to continuing to write, albeit on his terms instead of having deadline after deadline to conquer.

"I’d like to contribute as often as I can," he said. "I think I have a lot to say and that people still would like to (read) what I have to write."

And while he will be free to write for any outlet, he plans to focus on the Post-Dispatch/STLtoday.com.

"That's what I identify with and what people identify me with," he said.

Before that, there will be plenty to write about during the Cardinals' postseason run. Then after it's over, whenever that is, it will be time to unwind.

"I look forward to the end of every season," he said. "You just want to turn your batteries off for a while."

Those batteries, for a change, won't have to restart until he decides to plug them back in next year.

Hall of Fame Cardinals writer Rick Hummel is retiring from the Post-Dispatch at the end of this season after more than 50 years with the paper.

St. Louis Post-Dispatch sports writer Rick Hummel throws out the first pitch before a game between the Atlanta Braves and the St. Louis Cardin…

Rick Hummel, right, is honored in the Post-Dispatch newsroom on June 28, 2021, for his 50 years with the paper. Columnist Bill McClellan is te…

St. Louis Post-Dispatch sports writer Rick Hummel prepares to throw out the first pitch before a game between the Atlanta Braves and the St. L…

Rick Hummel, Busch and The Arch

Slugger homers and doubles  to knock in three runs, tying Babe Ruth for second on career RBI list. Wainwright lifted in fifth, as are Pujols and Molina in 7-5 loss to Pirates.

Right-hander, acquired from the Yankees, has become a high-leverage member of the bullpen, tying career high with 14 saves this season.

Donovan, Nootbaar, Carlson — three young players in the early stages of their careers — have grown, stumbled in their roles and could yet have playoff significance.

Manager Marmol advertises what might be his ninth-inning defense if Cardinals are ahead. Pujols swats No. 701 and defense does the rest with the help of netting.

Post-Dispatch sportswriter Rick Hummel is greeted by Cardinals coach Willie McGee after throwing out the ceremonial first pitch before a game against Atlanta on Aug. 4, 2021, at Busch Stadium.

Rick Hummel works in the Busch Stadium pressbox that has been named for him and one of his mentors, Bob Broeg.

Hall of Fame baseball writer Rick Hummel, left, is seated in the Dodger Stadium pressbox to cover the 2002 All-Star Game. Alongside is Post-Dispatch colleague Derrick Goold.