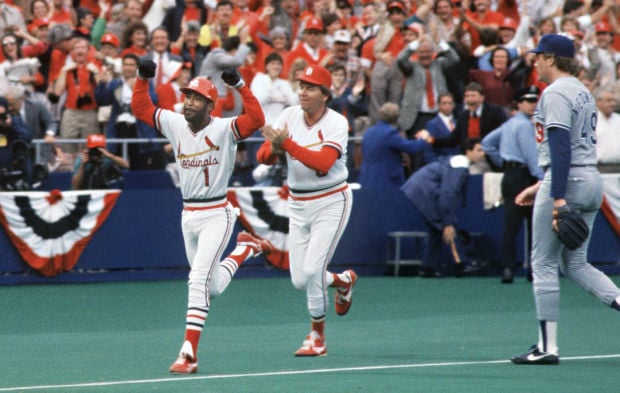 Ozzie Smith's famous home run during the playoffs in 1985 against the LA Dodgers that was announced by Jack Buck who made the Call: "Go Crazy, folks, go crazy".  PHOTO BY J.B. FORBES 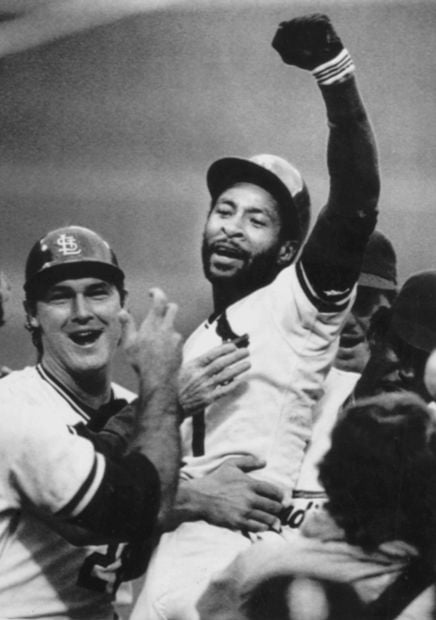 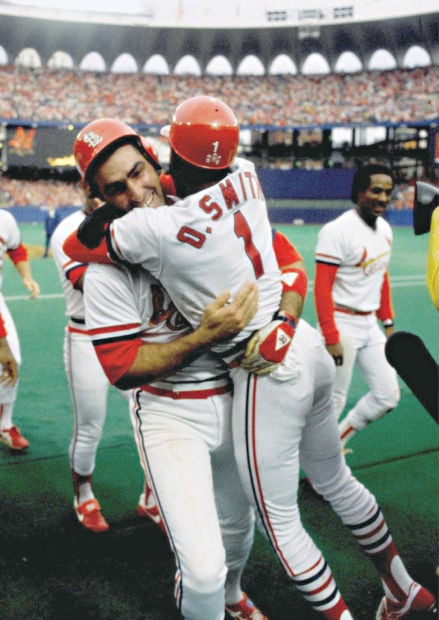 Oct. 14, 1985---Ozzie Smith's home run in the bottom of the ninth inning beats the LA Dodgers 3-2 and gives the Cardinals a 3-2 lead in the NL Championship series. Smith was mobbed by his teammates at the plate, and Jack Clark carried him off the field. This was the famous "Go crazy, folks, go crazy!" call by broadcaster Jack Buck. PHOTO BY J.B. FORBES/ ST. LOUIS POST-DISPATCH

Whitey Herzog managed the Cardinals for 11 seasons, not starting one of those years and not finishing two others — one being 1980, when he ascended to the general manager’s post with a month to go in the season and then hired himself back as manager when the season was over.

His 1982 club won the World Series but he said this weekend he considered his best Cardinals team his 1985 club. It will be honored for its 30th anniversary at the St. Louis Baseball Writers’ Dinner on Jan. 18, next Sunday, at the Renaissance St. Louis Grand Hotel (for tickets, go to stlouisbbwaa.com).

Several of the players and Herzog also will participate in the Cardinals’ Winter Warm-Up from Saturday through Jan. 19, at the Hyatt Regency St. Louis at the Arch.

From an inside-baseball perspective, Herzog said the 101-win team in 1985 was that good because of its excellent overall defense. Tom Herr was solid at second base, Ozzie Smith, fighting through a troublesome shoulder, was Hall-of-Fame caliber at shortstop and third baseman Terry Pendleton could range to his left so Smith could shade more up the middle. Jack Clark was adequate at first base.

Clark was no Keith Hernandez, one of the 1982 stars, at first base but Herzog said, “I didn’t consider first base that big a defensive position.”

Willie McGee, who won the National League batting title and Most Valuable Player award in 1985, also was the center fielder in 1982. And Andy Van Slyke, though a natural center fielder, probably was a bit superior in right to 1982’s George Hendrick.

The major difference in the outfield was that “(Vince) Coleman was better” in left field than 1982’s Lonnie Smith, who had misadventures on his feet and in throwing.

The catcher on both teams was Darrell Porter, who, for the most part, handled a Cardinals staff that had three pitchers combine for 60 victories — something that hadn’t happened to the club since 1935. And the staff had two pitchers who won 20 or more games (Joaquin Andujar and John Tudor both won 21) for the first time since Mort Cooper and Johnny Beasley in 1942.

Danny Cox had 18 wins as the third starter.

“When we went into a series with ‘Coxie,’ Tudor and Andjuar, we had a pretty good idea we were going to win at least two out of three,” Herzog said.

But the 1985 Cardinals probably will be remembered more for their speed and stunning base-stealing ability. They had 314 steals.

Rookie Coleman, with a league-high 110, headed the array of jackrabbits that featured four other players with 31 or more steals – McGee (56), Van Slyke (34) plus Smith and Herr (31 each).

Smith and Clark would hit momentous home runs in the league championship series. But for the season, the Cardinals had just 87 homers, led by Clark with 22, although Herr had an astonishing 110 RBIs on only eight home runs.

“Andujar and Clark were the only power hitters we had — that’s what Joaquin said,” Herzog said.

Andujar, calling his shot, had hit a grand slam the year before — “probably one of the biggest miracles in the history of sports,” cracked Herzog — but in 1985 “one tough Dominican” hardly was a tough out, hitting .106 with an astonishing 50 strikeouts in 94 at-bats.

Herzog learned in December 1984 that Bruce Sutter, who had been the Cards’ relief ace, had signed with Atlanta. That led Herzog to announce, “I just got 45 games dumber.”

Neil Allen, acquired from the New York Mets in 1983, had closer experience and was installed in that role by Herzog in 1985.

The first two Cardinals’ games that year were in New York. Allen lost the first on a 10th-inning home run by Gary Carter and the Cards lost the second in the 11th when Allen issued a bases-loaded walk.

A few weeks later, Allen lost an extra-inning game at home on a balk although Herzog now says that umpire John McSherry, now deceased, “must have had a date. I still haven’t seen that balk.”

What Herzog could see, though, is that he was going to need a different system of closing, via committee.

Righthander Jeff Lahti wound up with 19 saves and lefthander Ken Dayley had 11, with Bill Campbell contributing four and Rick Horton one.

But down the stretch, Herzog thought the club needed more so young Todd Worrell, who had struggled as a starter at Class AAA Louisville before being converted to the bullpen, was promoted.

“If we don’t bring him up on Aug. 30, we don’t even win the division,” Herzog said of Worrell, who had five saves and three wins in 17 games. “And he’s the guy who could have been the MVP of the World Series if we had had instant replay.”

This, of course, refers to umpire Don Denkinger missing a call at first base in the ninth inning of Game 6 in Kansas City when the right foot of Worrell, who was covering the bag, beat that of Kansas City runner Jorge Orta.

The runnin’ Redbirds stole just two bases in five attempts in seven games against the Royals as they didn’t have Coleman, who had been thwarted during the NLCS by a runaway tarp at Busch Stadium.

“In fairness,” said Herzog, “the Kansas City starting staff shut us down. We could have won getting only 13 runs in six games. As it was, we got 13 runs in seven games.

“We had to play baseball like everybody else, which we couldn’t do. Our basestealers never got on base and I think Tommy and Ozzie hit .150 and .160 or something like that (.154 and .087, actually)

“We never had the opportunity to play our game in the World Series.”

Be that as it may, the Cardinals’ 101 wins in their run to the 1985 National League flag were their most in 18 years and would be the most for another 19 years.

It was a year to remember — and it will be next weekend.

La Russa is happy to do battle again

Stir-crazy competitor starts fresh as the chief baseball officer for Arizona, which had baseball's worst record in 2014.

His home run in Game 5 of the NLCS allowed all of St. Louis to "Go Crazy."

Ozzie Smith's famous home run during the playoffs in 1985 against the LA Dodgers that was announced by Jack Buck who made the Call: "Go Crazy, folks, go crazy".  PHOTO BY J.B. FORBES

Oct. 14, 1985---Ozzie Smith's home run in the bottom of the ninth inning beats the LA Dodgers 3-2 and gives the Cardinals a 3-2 lead in the NL Championship series. Smith was mobbed by his teammates at the plate, and Jack Clark carried him off the field. This was the famous "Go crazy, folks, go crazy!" call by broadcaster Jack Buck. PHOTO BY J.B. FORBES/ ST. LOUIS POST-DISPATCH