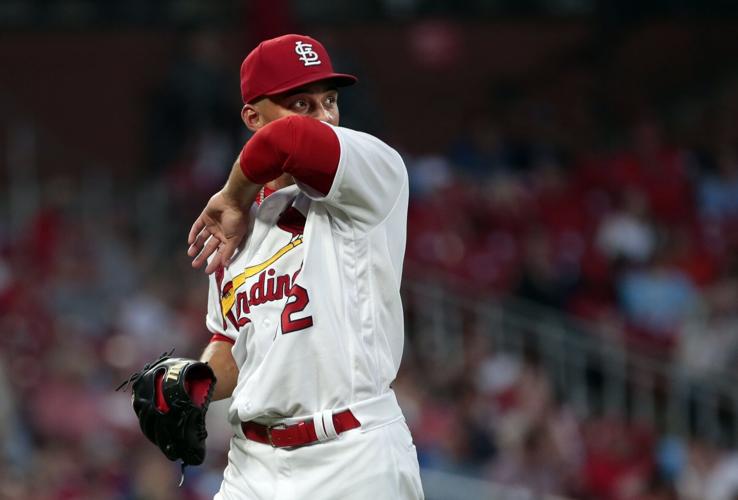 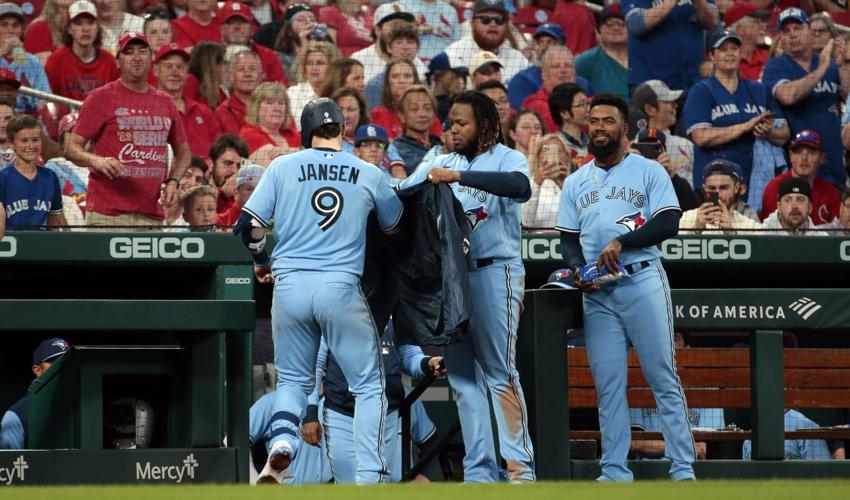 Toronto Blue Jays batter Danny Jansen is fitted with a celebration jacket by Vladimir Guerrero Jr. after Jansen hit a three-run home run against the St. Louis Cardinals pitcher Jordan Hicks in the fourth inning on Tuesday, May 24, 2022 at Busch Stadium. Photo by Robert Cohen, rcohen@post-dispatch.com

A tipping point in the Cardinals’ experimental program to build Jordan Hicks into a starter arrived Tuesday night, and with it came a great reckoning on a big role.

In the days leading up to Hicks’ start against Toronto, manager Oliver Marmol pinpointed it as the game in which decisions would shift from how many pitches Hicks needed to throw for increased stamina to, rightly, how Hicks pitched. He had started games, but this would be the first game in which he’d be treated as a starter — pitching as deep into the game as his performance earned.

He faced four batters in the fourth inning and did not get an out.

Hicks’ shift from former closer to budding starter hit a speedbump when he had fewer swings and misses than walks allowed in the Cardinals’ 8-1 loss to the Blue Jays at Busch Stadium. A compelling show featuring Toronto right-hander Kevin Gausman’s six shutout innings became a farce late when the Cardinals compounded a deficit with misplays. The Cardinals walked eight batters. Hicks allowed four runs, three on a homer off the left-field foul pole, and he complicated his evening with five walks. He spent most of the outing with more balls thrown than strikes and, measure for measure, that’s no way to start.

On Shakespeare Night at Busch, fans had T-shirts featuring a quote from the Bard and Hicks had the stage all to himself — no innings cap, no pitch limits — and a lackluster performance invited a classic dilemma.

To start or not to start — that is now the question.

“At the end of the day, you can’t go out there every five days and not attack the strike zone,” Marmol said. “We’ve been patient up to this point. It’s very difficult on your bullpen, especially when you have multiple starters giving you four innings and five innings at a time. Sometimes less than that. We’ll take a deep look at it.”

Hicks (1-4) walked the leadoff batter of the game on four pitches, walked the leadoff batter in his first two innings, and he still had the overpowering stuff to sidestep the trouble bubbling. Why he’s so tantalizing as a starter for the Cardinals is because he can walk a batter, allow two singles, and escape an inning with a 100-mph sinker to get a groundout. When, that is, he has a grip on that sinker.

From his opening act, Hicks lacked a feel for his fastball, and unable to tame it he veered away from it. Before describing how he’ll scour video for clues on what went awry, such as his arm slot, Hicks proved a blunt critic of his work.

“I need to throw strikes with my fastball,” he said. “I feel like I can get that fastball in there — that’s the game-changer. I can’t be out there throwing slider, curveball every pitch. Fastball’s supposed to get in there and let everything work off of that. Just not doing it.”

He couldn’t outpace the tempest that created.

In the fourth inning, Hicks clung to a 1-0 game and let it slip from his fingers. A leadoff single and walk brought Danny Jansen to the plate with two on. The Blue Jays’ catcher turned on a flat, spinning full-count slider and pulled it high and deep and lofting to left field. The foul pole was the Cardinals’ last line of defense, and baseball clanged off of it for a three-run homer. Hicks missed two fastballs during that at-bat, so he sought safety in the slider.

The trust he could not place in his fastball led to a misplaced slider.

“That confidence factor,” Hicks said. “You just missed two right on the corner. Alright, what’s been working all game? Slider. Hang it a little bit. Hit off the foul pole. … I think as a reliever in those situations, I can get out of that one inning with all sliders. It’s a really effective pitch, but it’s even more effective when my fastball is there.”

With Toronto holding a 4-0 lead after the first of Jansen’s two homers, Hicks faced No. 9 hitter Raimel Tapia. The right-hander walked him on five pitches, missing on three consecutive sinkers.

Some pitchers become starters. Some achieve a spot as starter, and some have starting thrust upon them. The Cardinals, with an opening in the rotation due to injury, began the season believing they could help Hicks' durability by molding him into a starter, on the job, and fill their vacancy at starter, too.

As he increased his pitch count and innings over each of the previous four starts, Hicks also talked about losing some of the command of his pitches. He has felt increasingly confident with a changeup he’s been workshopping, but his fastball misbehaves. Hicks traced that back to his foot placement and felt he corrected that this week during dress rehearsals in the bullpen. In each of starts this season, stretching back six as the Cardinals methodically followed their plan, he has walked at least two batters. He’s walked 20 in 28 2/3 innings total. The walks have increased to eight over his past seven innings pitched.

In his start last week in Queens against the Mets, Hicks threw more balls (43) than strikes (39). Wherefore art thou, command?

He finished with 40 strikes in 78 pitches and — in his first chance to pitch as deep as his success would take him — threw fewer pitches than his previous start.

“It’s just the consistency of it,” Marmol said. “He had back-to-back strikeouts during the middle of the order so you see (stretches) of it. It’s just a matter of him being consistent enough to do that over six innings every five days, and that’s what we’re looking for. Is he capable? Absolutely. Has he shown it consistently? No. That’s where at some point you have to look at the other guys in that bullpen and weigh what’s best, and that’s what we’ll do.”

Gausman (4-3) walked two in the first inning and the slipped free with a strikeout of rookie Juan Yepez with Paul Goldschmidt and Nolan Arenado on base. A two-out double in the second inning also yielded nothing else. A two-out single in the third by Goldschmidt extended his hitting streak to 16 games — and then stranded him at first base to shorten his commute for defense. Toronto’s right-hander pitched most of his game with a 1-0 lead from Teoscar Hernandez’s first-inning RBI single. But after Goldschmidt’s single, Gausman’s innings lacked any drama. He struck out eight Cardinals, including four of the six he faced around the time Jansen’s homer gave him a larger lead.

Toronto widened it further in the sixth by hitting for the cycle.

Tapia started the inning with a single off reliever Nick Wittgren. Leadoff hitter George Springer got the triple when right fielder Brendan Donovan lost a liner in the lights, slid, and had it go over his reach and to the wall. A sacrifice fly scored Springer to clear the bases for Vladimir Guerrero Jr., who socked Drew VerHagen’s 95-mph fastball to end a streak of 71 consecutive plate appearances without an extra-base hit. The Cardinals eked a run on Brendan Donovan's RBI single to spoil a shutout. Defensive miscues came later, including two in the eighth inning.

“It got loud there for a little bit,” Marmol said. “Game got away from us. Not our best baseball.”

What was done could not be undone.

Woodford, Naughton are options if struggling Hicks goes back to Cardinals' bullpen

Once skeptics of pitch-call tech, Cardinals debut PitchCom after spying a strategic benefit

One of the last team's to use MLB-approved gear, Cardinals used a keypad and small speaker (hidden in Hicks' hatband) to call pitches Tuesday in specific spots.

Matz is fastest for Cardinals, and closer Gallegos has slowest pitch 'tempo' in majors

According to new info available at Baseball Savant, Cardinals closer has a "slow tempo" 85.4% of the time with runners on. No one else is higher than 65%.

Toronto Blue Jays batter Danny Jansen is fitted with a celebration jacket by Vladimir Guerrero Jr. after Jansen hit a three-run home run against the St. Louis Cardinals pitcher Jordan Hicks in the fourth inning on Tuesday, May 24, 2022 at Busch Stadium. Photo by Robert Cohen, rcohen@post-dispatch.com