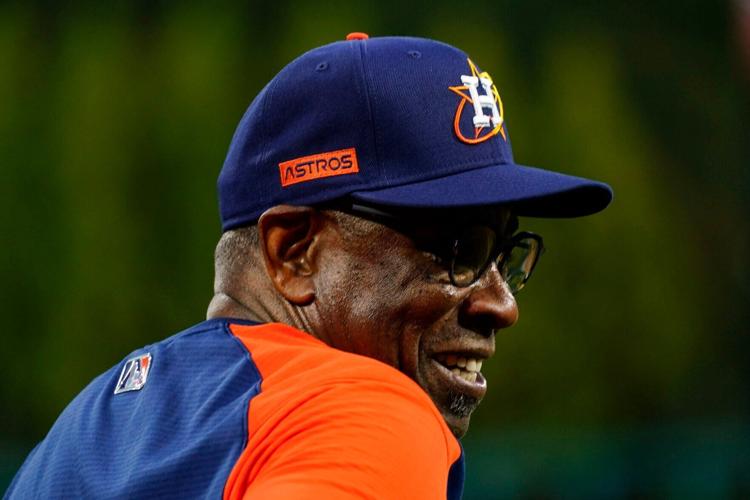 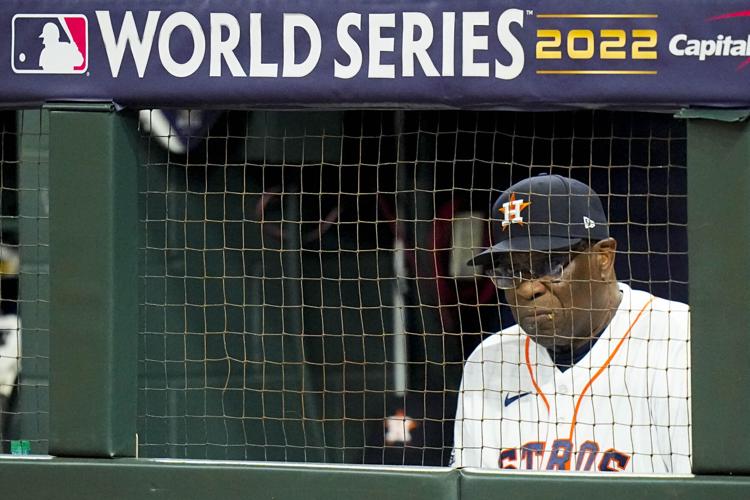 Houston Astros manager Dusty Baker watches play during the fourth inning in Game 1 of baseball's World Series between the Houston Astros and the Philadelphia Phillies on Friday, Oct. 28, 2022, in Houston.

In the same spot at the center of the Phillies’ clubhouse, Kyle Schwarber stood and used the same verb that Bryce Harper did the day before to describe their team’s predicament.

Harper was talking about how to move on from being on the no end of a historic World Series no-hitter Wednesday, and Schwarber was still processing a one-run loss in Game 5 on Thursday that swung heavily around Houston outfielder Chas McCormick’s leaping ability.

“We’ve got a day to flush that away,” Schwarber said.

If they use that same word in the same way again, they won’t be talking about a game. They’ll moving on from the season.

The Philadelphia Phillies found themselves traveling Friday toward a place they have not been before during their wild, unexpected postseason run — the brink of elimination. Four rounds and 16 games into the playoffs and for the first time the Phillies will play a game Saturday night at the end of which they can be eliminated. Over. Flushed. By winning 3-2 on Thursday, Houston took a 3-2 lead in the best-of-seven World Series and will have two chances this weekend, starting with Game 6, to clinch the championship at Minute Maid Park.

The favored Astros, winners of 106 games during the regular season and unbeaten in the playoffs until the Phillies’ comeback in Game 1, can claim their first World Series trophy since 2017.

Or, their first not smudged by that year’s sign-stealing stink.

They’ll get to do in the one place they aren’t booed.

A riveting trio of games at Citizens Bank Park became a laboratory to test the nature of momentum in baseball. Each team tried to catalyze it, see if it was contagious, dilute it, or create it out of thin air. The Phillies, a force at home all month, welcomed the World Series back to South Philly for the first time since 2009 by tying a record with home run runs in Game 3. Five different Phillies in home runs of the same Houston starter in a 7-0 romp. The next night that same Phillies lineup, which averaged seven runs a game, became only the second in World Series history to be no-hit.

In Game 5, the two teams exchanged runs earlier before Houston’s defense secured the win late as Justin Verlander pushed back against a career’s worth of momentum for his first World Series win as a starter after nine tries in 16 years.

Tests showed, at best, the half-life of momentum was no more than nine innings.

“I believe in (momentum), but I believe that momentum shifts from day to day,” Houston manager Dusty Baker said. “If you have a strong mind, you can handle the shift. But if you’re not strong mentally, then you’ll carry yesterday into today, especially if it was negative. But the momentum goes daily. And I think a lot of it — most of the momentum is career by the pitcher. If a guy’s dealing, it doesn’t matter what you did yesterday or it doesn’t matter what you’re going to do tomorrow.”

A Game 6 rematch is set to offer proof.

The rainout in Philadelphia, the lopsided Game 3 score, and the nature of postseason baseball posed a challenge to both pitching staffs, and each manager made choices to set up a Game 6 starter on at least normal rest, fresh and ready for what was certain to be a clincher for one of the teams. (And an elimination game for the other.) Houston has lefty Framber Valdez set for his second start of the series on the same mound where he struck out nine Phillies, bedeviled them with his sinker, and won in his latest quality start of the year. Valdez wasn’t so much momentum as steadfast for the Astros all season. He set a major-league record with 25 consecutive quality starts — and got the T-shirt “Quality Start Tour 2022,” which he wears around.

In the postseason, he’s added two more quality starts for a total of 28 in 34 starts.

Baker had a tried-and-true reason for going with Valdez in Game6.

“I think I’m just going to try to continue doing what I’ve been doing all season,” Valdez said. “Just try and attack hitters early, try to breathe, try to stay calm, try to meditate. It’s something that’s really exciting. I think (a clincher is) something that really adds a lot to your career, and I’m really excited for this opportunity.”

The Phillies purposefully waited to give Zack Wheeler his, electing not to use the right-hander in Game 5 when the rainout provided that choice. The Phillies preferred to steal another day of rest for Wheeler, even if it meant he did not appear again in the series.

The right-hander, Phillies’ Game 1 starter at the beginning of the postseason for the wild-card visit to Busch Stadium, took a line drive off the knee, and his results fluctuated in Game 2 against Houston. Both of his fastballs dipped in velocity. He allowed five runs on six hits in five innings and goosed Houston’s lineup with three walks.

“He was just a little off,” Phillies manager Rob Thomson said.

Any momentum Wheeler generated was for Houston.

“I think it resets day-to-day,” Wheeler said in a travel press conference Friday. “Especially with a starting pitcher. From my standpoint, I’m going out there and pitching my game and starting new.”

Newness was one edge Wheeler had going into the World Series and may yet be one the Phillies find this weekend in Houston.

By clinching a playoff berth before the final two games of the regular season, Philadelphia rewrote its rotation so that Wheeler did not make a start that weekend — in Houston. His start in Game 2 against the Astros was his first against that lineup. Valdez, meanwhile, will be making his fifth start since Oct. 5, and three of them have been against the Phillies.

“The more you see the shape of his pitches and see it up close and how the fastball sinks or rides,” Thomson said, “I think you have a better chance.”

It helps to have been in that spot before.

Baker has been in this one.

He’s felt the swell and sting of momentum and knows neither lasts.

Today is a new day, a new pitcher, and new momentum.

Today could be the day.

“I’ve just learned over a period of time that, hey, you just live your life, try to do the right things, seize the moment, and enjoy as much as you can,” Baker said in a press conference Friday before flying to Houston. “I mean, enjoy this ride. And then when the game times comes, you know, I’ve always thought, hey, I’m supposed to win. I’m going to win.”

Houston Astros manager Dusty Baker watches play during the fourth inning in Game 1 of baseball's World Series between the Houston Astros and the Philadelphia Phillies on Friday, Oct. 28, 2022, in Houston.