On April 6, 2007, Adam Wainwright and Yadier Molina made their first start as a battery. This is how Joe Strauss covered the story.

The Cardinals have long suspected something special in Adam Wainwright.

Shouldering the weight of a winless season Friday night, the same righthander who snapped off the final pitch of a storybook October broke the hold of a grinding opening week.

Wainwright, whose towering potential was central to a five-player trade with the Atlanta Braves 40 months ago, made his first major-league start a showcase event. Adroit enough to control the Houston Astros' lineup for seven innings of a 4-2 Cardinals win, he also gave his slumping team its first lead of the season by pounding a fourth-inning RBI double onto Tal's Hill.

It didn't end there. Left fielder Chris Duncan's three-hit, three-RBI game against two lefthanders, a return to defensive form and rehabilitated Jason Isringhausen's first save since Sept. 5 allowed the Cardinals to dump the Astros to 0-4.

Wainwright insists he is largely immune to pressure, a good thing when fronting a team that carried a .200 average and twice as many errors (four) as RBI (two) into the game.

All Wainwright did Friday was help the Cardinals avoid tying the worst start ever by a defending World Series champion.

In his team's 99th official at-bat of the season, and with center fielder So Taguchi at first base, Wainwright doubled off the warning track some 400 feet away. When Taguchi motored home, the Cardinals had their first lead and third run in 30 innings this season.

The rally grew two hitters later as Duncan mashed a fastball from Astros lefthanded starter Wandy Rodriguez for the team's second home run of the year and a 3-0 lead.

The Cardinals managed only one more hit through seven innings. Wainwright and a series of dazzling defensive plays made a narrow lead stand up. If Cardinals fans thought they had it bad earlier this week, 43,430 Texans left Minute Maid thinking they have it worse. The Astros have scored nine runs in four games, compared to the Redbirds' six.

The Cardinals, however, avoided another run when third baseman Scott Rolen threw a sidearm strike to shortstop David Eckstein to force the lead runner on Rodriguez's attempted sacrifice.

The inning died when first baseman Albert Pujols began a 3-6-1 double play with an aggressive throw on Lamb's ground ball.

Calling for a squeeze bunt from No. 8 hitter Brad Ausmus, Astros manager Phil Garner saw the move detonate when Wainwright shoveled the ball home to catcher Yadier Molina, who tagged Burke, then reflexively threw to first for a double play. When he retired pinch hitter Mark Loretta to end the threat, Wainwright left the mound with his right fist clenched.

Wainwright left for a pinch hitter in the eighth after allowing the Astros five hits and three walks. Just as significant, he needed only two outfield putouts in a place where a pitcher can seemingly reach out and touch the Crawford Boxes.

Duncan, who leads the team with five hits in three starts, had another extra-base hit when he drove a one-out, sixth-inning pitch into the right-field corner. Duncan became the inning's second out when, slow to pick up third-base coach Jose Oquendo, he was thrown out trying to stretch it to a triple.

If he needed any, Duncan achieved atonement in the eighth inning when he pulled a ground-rule double off lefthanded reliever Trever Miller to score pinch-hitter Scott Spiezio, whose two-out walked began the stir.

Clutching a 4-1 lead, manager Tony La Russa offered the first hint at how he will bridge the eighth inning to Isringhausen. Ryan Franklin faced Craig Biggio and Mike Lamb before the manager summoned Randy Flores to strike out switch-hitter Lance Berkman.

Lee began the ninth inning with what was ruled an infield single when Rolen failed to hold on to a three-hop grounder. Right fielder Luke Scott topped a ground ball to second base, advancing Lee into scoring position, before center fielder Chris Burke struck out on a 92 mile-per-hour cutter. Pinch hitter Orlando Palmeiro squibbed a single through Isringhausen to score Lee.

Facing the tying run, Isringhausen got pinch hitter Jason Lane to fly out to right field for the 250th save of his career.

A sprain revealed in his left thumb was the cause of "nagging" pain that led to off-balance, sometimes one-handed swings and may have contributed to slump. 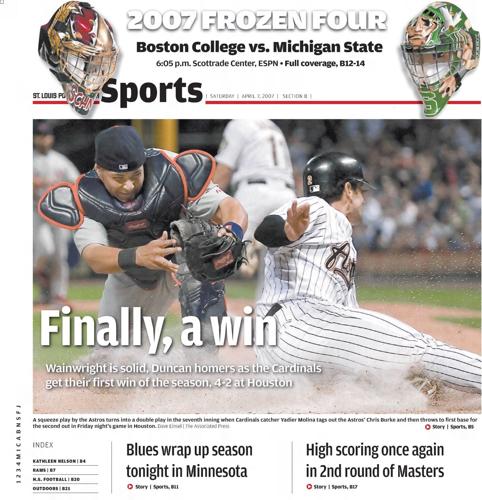 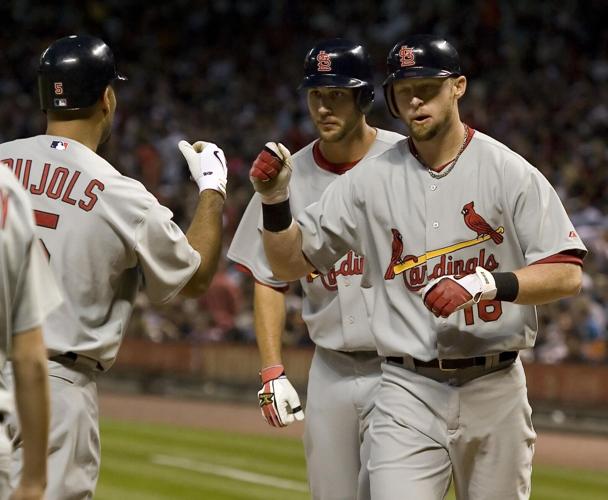