Subscribe
Read Today's E-Edition
Share This
Hudson is a little better but Goldschmidt, Sosa and bullpen come to the rescue for Cardinals
0 Comments
Share this
1 of 2 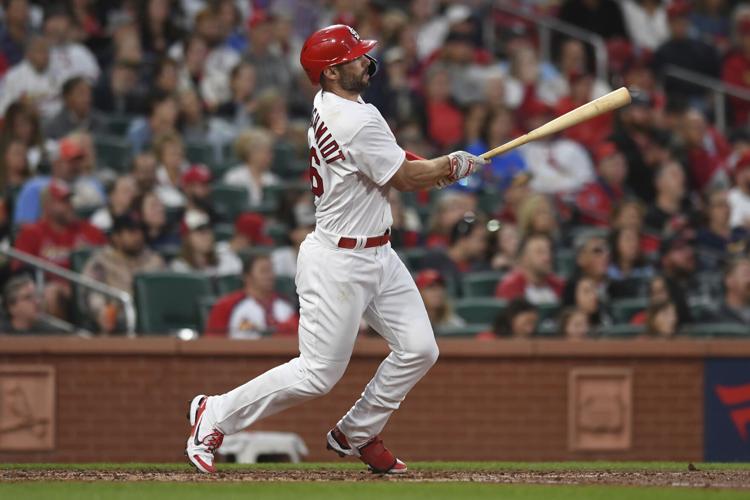 St. Louis Cardinals' Paul Goldschmidt hits a two-run home run during the third inning of a baseball game against the Milwaukee Brewers on Friday, May 27, 2022, in St. Louis. (AP Photo/Michael B. Thomas) 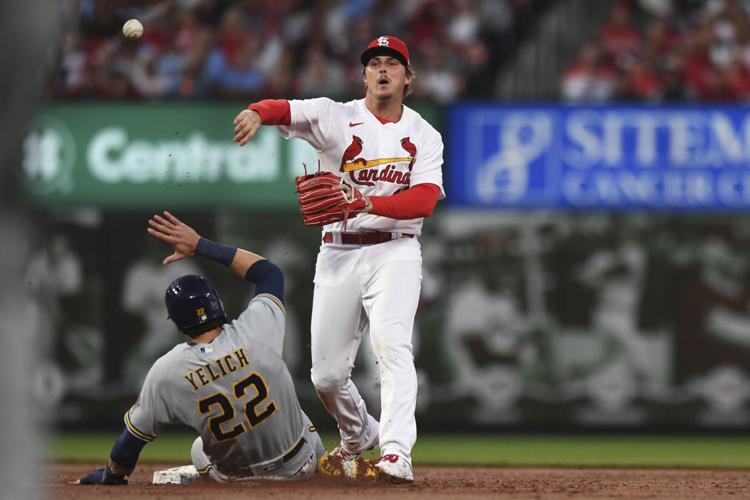 St. Louis Cardinals' Nolan Gorman, right, turns a double play in the third inning against the Milwaukee Brewers during a baseball game Friday, May 27, 2022, in St. Louis. (AP Photo/Michael B. Thomas)

There was good news — and a snippet of old news for Cardinals right-hander Dakota Hudson on Friday night.

On the plus side, Hudson worked at a brisker pace, in part, because he and catcher Andrew Knizner employed the new PitchCom method of signals between the battery men. The sinkerballer also recorded eight ground ball outs in the first four innings, including throwing a key double-play ball with the bases loaded and one out in the third inning.

Hudson walked four hitters for the third time in nine starts this season. He didn’t allow a run in 4 2/3 innings but it took him 97 pitches to get that far. The Cardinals’ bullpen and Paul Goldschmidt and Edmundo Sosa did the rest, though, in a 4-2 win over the Brewers at Busch Stadium.

Goldschmidt, extending his hitting streak to 18 games, smacked a two-run homer in the third. Sosa tripled home a run as a pinch-hitter in the seventh and then dashed home to score another run on a fielder’s choice grounder.

Relievers Drew VerHagen, Genesis Cabrera, Kodi Whitley and Ryan Helsley shut down the Brewers on three hits over the final 4 1/3 innings, although one of the Brewers’ hits was a two-run homer by Keston Hiura off Whitley in the ninth. Helsley’s save was his third and he still has given up only two hits in 16 1/3 innings, with first baseman Goldschmidt contributing a sliding stop to his left on the final play of the game.

VerHagen “snaked” his second victory of the season although he wished Hudson could have had it. it. Hudson, who missed most of last season after having Tommy John elbow surgery, said he was making progress but there was more to be made.

For instance, after seven days of rest, he had hoped to go much deeper into the game, “trying to not be such a hassle to give (the bullpen) extra days off. Instead of 4.2 (innings), six, seven is a lot easier on everybody,” he said.

Hudson extended his scoreless streak to 17 2/3 innings and he entered the game with a 2.34 earned-run average at this version of Busch Stadium, second behind John Lackey. But he stalked off the field when he was being replaced, not aware, he said, that he had reached 97 pitches.

“I don’t think I’m anywhere near the result,” he said. “Maybe you see the anger on my face when I came off the mound. You’ve got to hold yourself to a standard. I’m getting there but sometimes it’s just irritating in the process.”

Milwaukee right-hander Brandon Woodruff held the Cardinals without a hit for two innings before Harrison Bader singled off the backhand attempt by second baseman Kolten Wong with one out in the third. Bader, who has 13 steals in 13 tries, went to third on Tommy Edman’s fly to deep left center.

Goldschmidt, who had fanned in 10 of 28 career at-bats against Woodruff, got the upper hand on this occasion. Off a 97 mph sinker, he drilled his ninth homer. It went into the Brewers’ bullpen in left center, accounting for the first two runs of the night.

Besides his hitting streak in which he has hit .440, Goldschmidt has reached base in 32 consecutive games. Asked which was the more important to him, ultra-team man Goldschmidt responded in typical fashion, “I don’t care about either of them.”

Hudson said, “He’s doing incredible things but ... if you’ve played with this guy for more than this year, there’s always a streak like this. It’s just fun to watch a great player be great.”

In the fifth, Hiura and Christian Yelich walked and Wong singled to left. Yelich’s walk, his second, prompted Cardinals manager Oliver Marmol to remove Hudson for right-hander VerHagen. Quickly, VerHagen induced Andrew McCutchen to ground to third baseman Nolan Arenado, who stepped on third for the inning-ending force as the Cardinals dodged their second bases-loaded quandary of the night.

“It was a big spot in the game and I was happy to be in there. That’s why you play — big situations like that.”

Marmol said, “We’re going to have to count on him for some more meaningful outs. I don’t want to use him as just a ‘long guy.’”

Not many wins are achieved by throwing three pitches.

“That was the definition of ‘snaking’ a win,” VerHagen said, smiling. “When you look it up in the dictionary, that’s what it looks like.”

Hudson still lasted longer than Woodruff. The burly Brewer, like Hudson a Mississippi State University product, came out of the game before the Cardinals’ fifth because of right ankle discomfort and right-hander Luis Perdomo relieved.

VerHagen was one (out) and done for the Cardinals, who turned to left-hander Cabrera in the sixth. Cabrera went two scoreless innings. He has pitched two or more innings 12 times in his career but hasn’t given up in a run in any of them, covering 25 innings.

Perdomo proffered the Cardinals a gift in the sixth when he knocked down Arenado’s grounder to his left and, without looking, flipped to first ... except that first baseman Rowdy Tellez had moved to make a play on the ball and couldn’t get to first in time to corral the throw that rolled into foul territory.

Arenado got to second but Albert Pujols popped up.

Second baseman Nolan Gorman made a nifty, short-hop grab of Wong’s smash to his left for the second out of the Milwaukee seventh.

The Cardinals then tacked on two runs in their portion of the inning.

Juan Yepez singled off the glove of Wong, who nearly made an acrobatic over-the-shoulder play in short center. Sosa, hitting for Gorman against left-hander Brent Suter, tripled on the first pitch he faced into the left-center-field gap to score Yepez.

After Knizner fouled out, Lars Nootbaar hit a chopper to Tellez, who threw home but the ball wasn’t on target to catch Sosa, who dived across the plate after getting cheating a bit to get a swifter start from third.

Sosa seems something like a sixth man in basketball, making something happen and almost immediately sometimes.

“He’s got a good energy to him,” Marmol said.

Sosa said he started preparing to come into the game when Woodruff was hurt. Addressing Marmol’s comment about his energy Sosa said, “It feels good to know that. I simply try to ... inject that charisma to the team as much as I can.”

St. Louis Cardinals' Paul Goldschmidt hits a two-run home run during the third inning of a baseball game against the Milwaukee Brewers on Friday, May 27, 2022, in St. Louis. (AP Photo/Michael B. Thomas)

St. Louis Cardinals' Nolan Gorman, right, turns a double play in the third inning against the Milwaukee Brewers during a baseball game Friday, May 27, 2022, in St. Louis. (AP Photo/Michael B. Thomas)