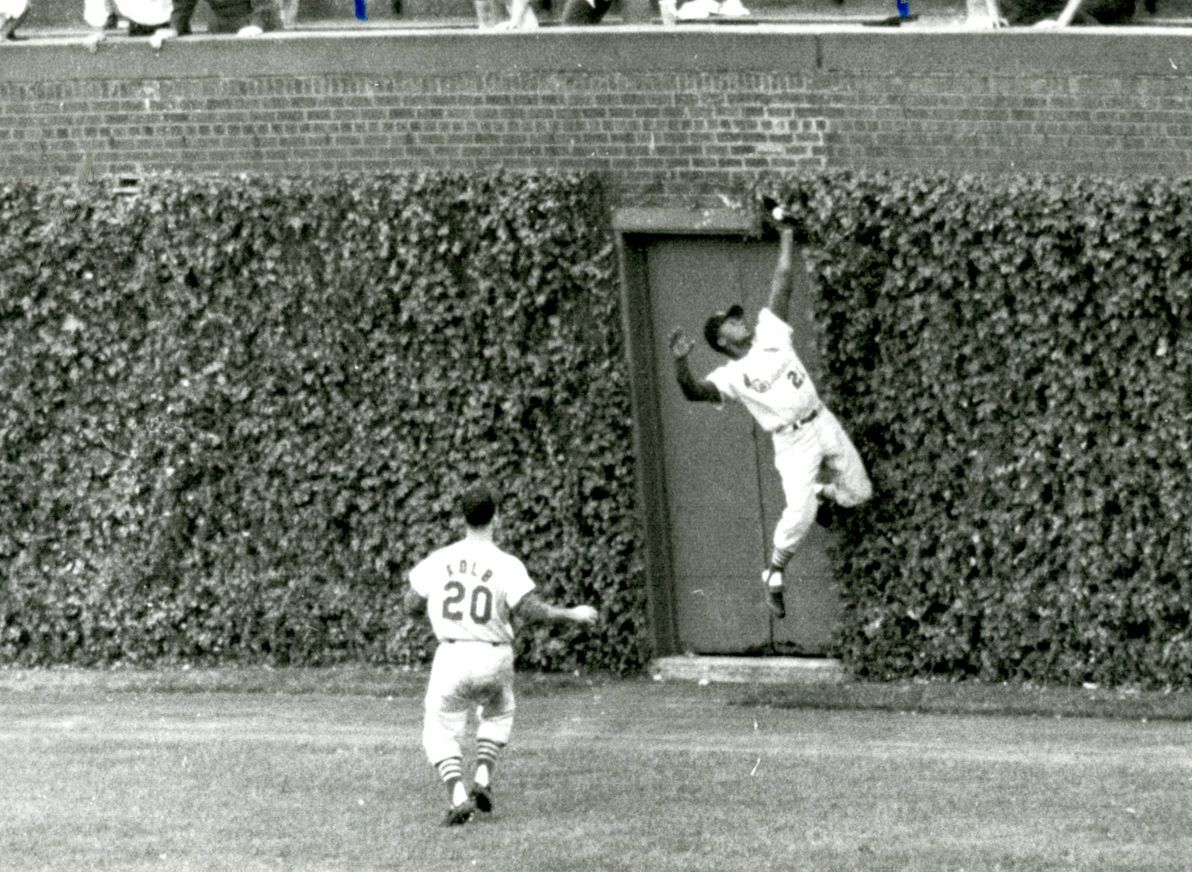 Cardinals centerfielder Curt Flood leaps into the vines to make a spectacular catch of Nelson Mathews' drive int he fifth inning of a game on Sept. 18, 1962, at Wrigley Field in Chicago. The Cubs won 4-3. Post-Dispatch file 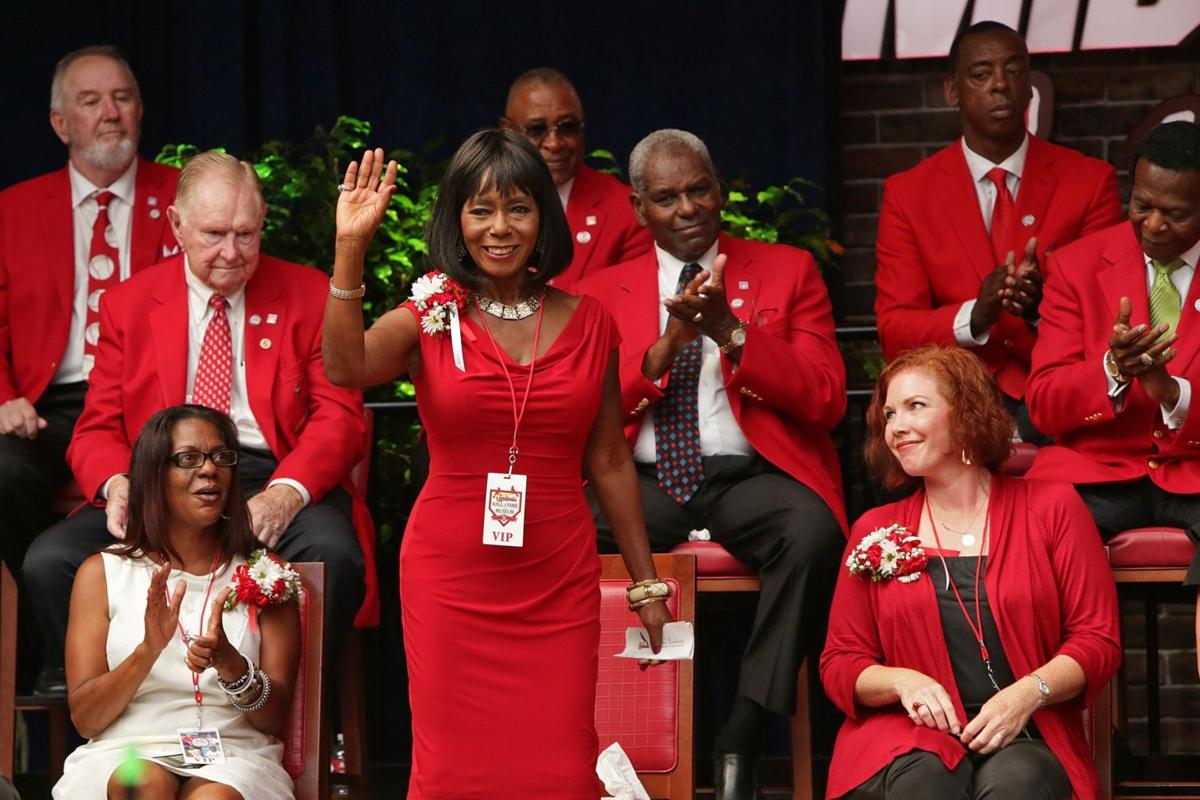 Cardinals Hall of Famer Red Schoendienst summarized former center fielder Curt Flood’s career this way: “He was a better ballplayer than everybody thought he was.”

Schoendienst, who managed Flood for five seasons (1965-69) and was Flood’s teammate or a coach on a few Cardinals teams before that, was referring to those outside the game’s inner circle. Those on the inside knew — sometimes all too well.

Tim McCarver, a catcher for three World Series teams on which Flood played, recalled Los Angeles Dodgers Hall of Fame pitcher Don Drysdale saying that Flood was the “toughest out” in the National League.

“I can’t tell you what a huge accomplishment that is,” McCarver said.

“Don Drysdale never considered righthanded hitters. Period,” McCarver said. “He got them out because he knocked them down. But Curt would not budge. For Drysdale to say something like that about a righthanded hitter is forever a compliment.”

Flood was inducted into the Cardinals’ Hall of Fame on Saturday.

McCarver was so struck by Drysdale’s statement that years later, when both were in the broadcast booth doing baseball for ABC, he asked Drysdale if he really meant what he said and Drysdale said he had and added that he never could run the ball inside on Flood, who would stand his ground.

Flood hit .319 in 138 career at-bats against the sidearming righthander, striking out just 14 times.

“I could never get him out,” Drysdale would say.

“This isn’t just any righthanded pitcher talking about a righthanded hitter,” McCarver said. “This guy made a pretty good living pitching inside.”

Mike Shannon, the radio voice of the Cardinals and a starter for those same three World Series clubs, said, “The thing I remember most about Curt Flood was that he had phenomenal concentration at the plate. Red is right. Flood doesn’t get the respect that he deserves.”

But Flood, who died from cancer in 1997, turned down a chance to make $100,000 or so in 1970 after having been traded by the Cardinals following the 1969 season — along with McCarver and outfielder Byron Browne — to Philadelphia for Dick Allen, Cookie Rojas and Jerry Johnson. Flood, citing the Phillies’ poor record and dilapidated stadium, refused to accept the trade. There was no free agency at the time, and he ultimately appealed his case to the United States Supreme Court.

Although his legal challenge was unsuccessful, it fostered solidarity among players and ultimately led to free agency.

“It was a monumentally courageous move for him to do that,” said McCarver, who admitted he had nowhere close to that much courage to refuse to report to Philadelphia. “I don’t remember feeling the respect for Curt, initially, that I was to feel later on. We were overwhelmed that anybody would do something like that. We were flabbergasted. We couldn’t believe it. You’re taking on the whole industry and basically doing it by yourself.”

UNSURE WHAT TO DO

McCarver, representing the Phillies at this point, remembers heading for players’ association meeting in Puerto Rico and, with Cardinals player rep Dal Maxvill, discussing Flood’s plan with Flood and asking him if he was sure about he wanted to do.Flood was sure and essentially gave up his career, although he tried to come back with Washington in 1971, giving up after just a few days and 42 at-bats. In retrospect, McCarver laments having not been more supportive as Flood’s judicial process, spearheaded by players’ association executive director Marvin Miller, proceeded.

“We didn’t know what to do,” said McCarver. “I was not alone in that. But I think Curt had the feeling that some guys let him down by not attending the hearings with the Supreme Court. We didn’t know how to handle it.”

McCarver said the players feared that if Flood was ostracized, others who sided with him would be held accountable, too.

“There was some of that among everybody, even if it was on another ballclub,” said McCarver. “We chose our words carefully. And I’m forever regrettable about that.”

McCarver and Cardinals Hall of Fame pitcher Bob Gibson, one of Flood’s closest friends, think Flood’s battle with baseball’s reserve clause, which bound players to one team with little or no chance to control their destinies, overshadowed just how good a player he was.

“He was a damn good player,” Gibson added. “I would venture to say that if it hadn’t been for all the stuff involved in him suing baseball ... he would have had a good chance of being in the (National) Hall of Fame.”

Flood was much more than a teammate to Gibson after the two joined the Cardinals in the late 1950s. The two young black players were roommates for several years, as they had been in Omaha when both played there.

“He was more of a friend to me than to probably other guys,” Gibson. “We lived together day and day out. I guess you can live with somebody and not really talk to them. That’s why you get divorced, right? But we got to be super good friends. We did all sorts of things together, over and above what’s expected of teammates. We enjoyed every minute of it.”

“Mays had a much stronger arm than Flood but a lot of guys had stronger arms,” Gibson said. “But as far as going after a ball, he was second only to Mays.”

Gibson said he thought Flood could have hit 15 to 20 points higher if he didn’t have to give himself up when he batted second.

“When he was hitting behind (base-stealing whiz Lou) Brock, Curt had two strikes a lot of times,” Gibson said.

“You’ve got to take a strike to let him run. And then if he doesn’t run, you ask yourself, ‘Do I swing at the next pitch?’’’

Flood was only 5 feet 9 and 165 pounds, but when he was in the Cincinnati organization in the minors before coming to the Cardinals in a trade, he hit 29 homers one year and 14 the next.

“He thought he was a home run hitter,” Gibson said, “but (veteran) George Crowe got ahold of him and said, ‘You’re not going to be a home-run hitter. You need to hit the ball the other way.’ I can’t say George taught him. He instructed him because I don’t know if George ever hit a ball the other way. He couldn’t do it.”

Flood started all 21 games in the Cardinals’ three World Series in the 1960s.

“He was as important for us getting into the World Series as anybody,” Gibson said.

In the seventh game of the 1968 Series, which the Cardinals lost to Detroit, there was the rarest of misplays by Flood — who had a liner by the Tigers’ Jim Northrup sail over his head for a two-run triple, breaking a scoreless tie in the seventh inning.

“He slipped,” said Schoendienst, who like Flood’s Cardinals teammates laid no blame at Flood’s doorstep. “That could have happened to anybody.”

In the parlance of baseball, Flood was “a good teammate,” although McCarver said that type of praise often can be faint. But not in Flood’s case.

“I still feel uneasy when you hear that a player is a ‘good teammate,’’’ McCarver said. “I’m surprised you have to break it down like that.

As a 21-year-old catcher, McCarver remembers Flood asking him questions specifically about veteran Cardinals lefthander Curt Simmons and his tendencies in throwing pitches. Flood wanted to know about Simmons’ tailing fastball and when he would throw it and, as soon as McCarver had flashed the sign, Flood already had moved two or three steps in a particular direction before the ball even got to the plate.

“That was the first time I ever saw a center fielder do that,” McCarver said.

Flood received his Cardinals due this weekend.

“He just went about his business,” Schoendienst said. “He knew how to win. He didn’t have a great arm but he was a good fielder. He was a good hitter. He was good on the ballclub. He was everything you’d want. Just put him in there.

“He wasn’t nearly as flashy as some of them. He didn’t play that way. He caught the ball, threw his glove down, picked up his bat ... and got a hit.”

Sound Off: Put Ted Simmons in the baseball Hall

Here's a sampling of readers' letters to the Post-Dispatch Sports department last week:

Former catcher for Cards is one of four to enter team Hall of Fame.

Stern veteran goes 8-plus innings, and adds two hits and an RBI of his own in 6-2 victory over Miami.

Goold: A major hand from a minor-leaguer

Wainwright 'getting better every week'

O'Neill: St. Louis is more than just a baseball town

Dodgers righthander could pitch shutouts in each of his remaining starts and still not match Gibby's magical 1.12 ERA.

Cardinals centerfielder Curt Flood leaps into the vines to make a spectacular catch of Nelson Mathews' drive int he fifth inning of a game on Sept. 18, 1962, at Wrigley Field in Chicago. The Cubs won 4-3. Post-Dispatch file