Hummel: My four-decade friendship with Brock had a rough start
0 comments
Share this
{{featured_button_text}}
1 of 2 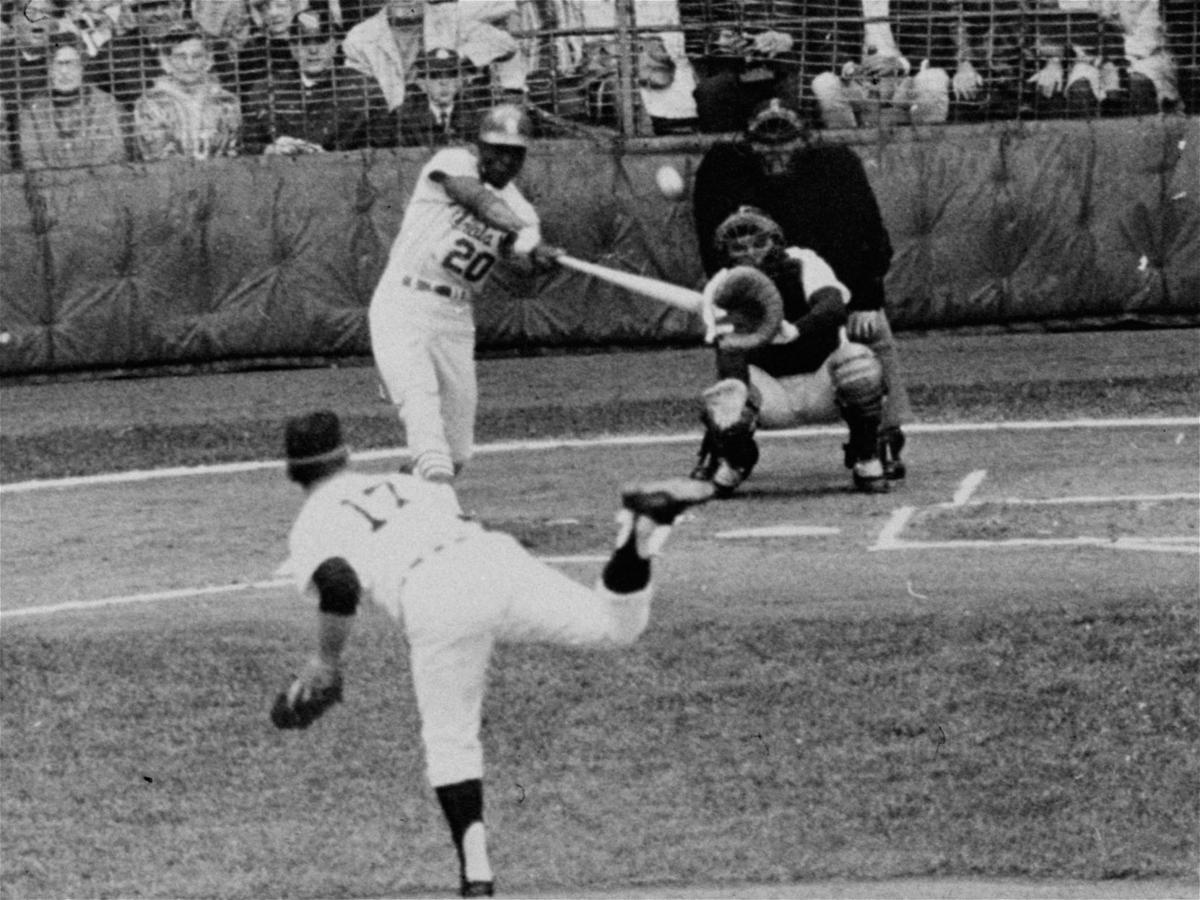 The Cardinals' Lou Brock hits the second pitch from the Tigers' Denny McLain in Game 4 of the 1968 World Series for a home run, into the upper deck in right center, at Tiger Stadium in Detroit. The catcher is Bill Freehan, the umpire is Bill Kinnamon for the game played on October 6. (Associated Press) 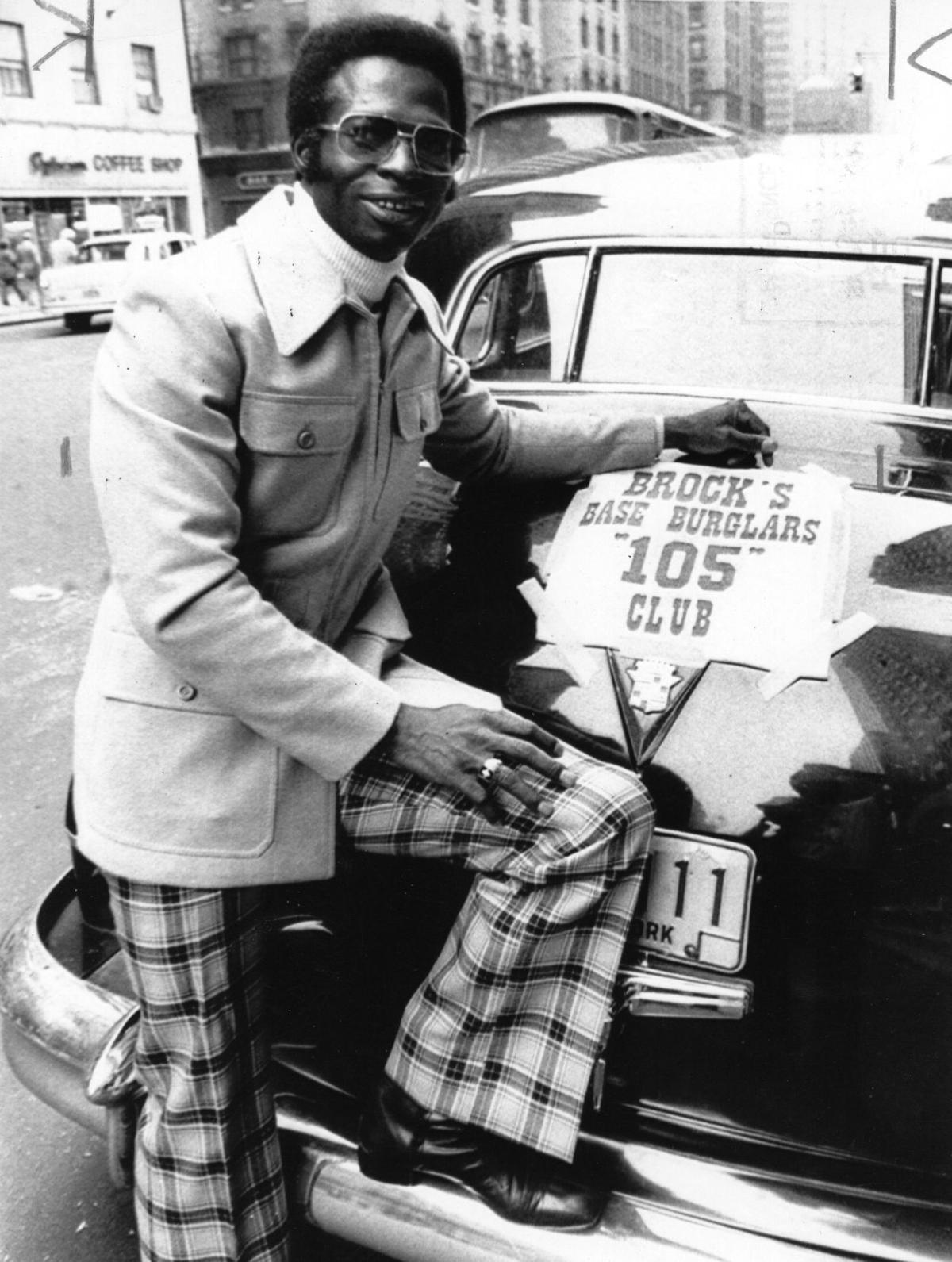 The Cardinals' Lou Brock, the new single-season base-stealing champion, is amused by sign placed on the back of car by friends before being driven to Shea Stadium for a game against the New York Mets on Sept. 11, 1974. The sign reads: BROCK'S BASE BURGLARS "105" CLUB.

The year was 1978. And what a year it wasn’t. The Cardinals fired Vern Rapp as manager, replacing him with former Cardinals star Ken Boyer. The Cardinals went on to lose 93 games, their most since 1913 — when even future Hall of Famer manager Miller Huggins couldn’t prevent them from dropping 99.

Future Hall of Famer Lou Brock, 39, was benched by Boyer for most of the final month of Brock’s .221 season, and there were whispers that he was finished. They were more than whispers, even one under this scribe’s byline, although he mostly was citing other sources. Louis Clark Brock, who had come a long way from the cotton fields of Louisiana as one of nine children, took offense.

I was in my first season as the “beat” man covering the team for the Post-Dispatch and was taken aback when Brock refused to talk to me in September. There was no explanation, but I had an idea. I hadn’t expressed the critique of Brock in column form, but the normal jovial nature Brock offered was anything but.

What a predicament! You’re in your first year on the dream beat of a major paper and the most prominent member of the team won’t talk to you.

When spring training of 1979 was near, I knew that we had to talk about this. The conversation was uncomfortable at first.

“You haven’t been doing this that long to make those sorts of value judgments,” he said. “I’ll let you know when I’m done. I’m not done, Junior.”

The phrase “Junior,” was not spoken in a friendly tone that day. Yet, it was the greeting we had for each other the rest of his life. Even when he was in his 80s and I in my 70s.

We hashed it out that day, and I spent one of the best seasons of my career in 1979 with Brock, in his final season as he “orchestrated his own exodus,” from baseball, hitting .345 in the spring to reclaim a job and then .304 in the regular season.

We stayed at the same hotel across from Al Lang Stadium in St. Petersburg, Florida. We mostly were by ourselves, and that meant some dinner (he favored fish) and some cocktail sessions (he favored wine). It also meant being asked by Brock to accompany him on the many visits he made to Boys Clubs and service clubs and other functions in every road city in which the Cardinals played that year, as everybody wanted to honor the man and the career.

He called me “Junior,” but, for a few years, at least, Lou Brock called me “Rich Humboldt,” which always brought a cackle from fellow Hall of Famer Bob Gibson. I answered to either but mostly to “Junior.”

For a number of years, Brock was a staple at training camps as a base-stealing and base-running instructor, but his philosophies, while easy to understand for him, were Greek to some of his students. Brock eventually did the same job for a couple of other teams, including the hated Dodgers.

Later in our lives, it might be only once or twice a year that we’d catch up. At the writers’ dinner, or spring training, or, unfortunately when he was fighting one of his many medical enemies — diabetes, loss of part of his leg, blood cancer, a heart ailment and a stroke that limited his speech a bit, which was hard because Lou Brock did love to talk.

“The only way I believed I had a stroke was that I couldn’t talk for a week,” Brock said a year ago in spring training.

Through therapy, his voice recovered to a degree. But he managed an uproarious laugh when he was kidded that sometimes he didn’t make a lot of sense anyway when he was speaking.

The will to live was unquestioned, and Brock said the alternative “honestly never crossed my mind. I had not one incidence where I felt like giving up — even with the stroke.”

Brock might have had his best bounce-back between the 2015 and 2016 seasons.

On Oct. 27, 2015, he had his left leg amputated below the knee after a diabetes-related infection raged through the leg from an apparent scratch to his foot while playing golf.

The infection coursed through his bloodstream, permeating to his heart, lungs, liver and kidneys. Brock also had to have a heart bypass along the way, besides having been fitted with a prosthesis.

Still, he joked, “You can print this. I still think I can beat Yadi in a race.” He was referring to speed-challenged catcher Yadier Molina.

So informed, Molina laughed. A little, at least.

But on opening day 2016 at Busch Stadium, as sunshine finally had chased away the rain, Brock took the field again to throw out the ceremonial first pitch.

Brock, who backstopped himself with a cane, paced off his steps from home plate and moved to a distance about 35 feet away, with new Cardinals Hall of Famer Ted Simmons set to receive the pitch. Brock paused to balance himself.

“I had no choice,” he quipped.

And then he threw a strike as the sellout crowd went wild.

Brock said he first had heard from the Cardinals about throwing out the first pitch a week before. He immediately began practicing, either pantomiming the act or actually tossing a baseball to see if he could do it and not fall down. He had made maybe 10 practice tosses, but one wag said it was the first time he had seen Brock hit a relay man. Brock laughed.

Brock said the hardest part of his new life had been that when he awoke, he couldn’t get out of bed the way he used to.

“Oops, forgot,” said Brock, referring to the fact that part of his leg was lying near the bed.

At the time, that was to be Brock’s biggest life challenge.

“The doctors are going to put a schedule together and then I’ll be walking around like a sportswriter,” he said.

That didn’t sound all that great to me, necessarily, but then Brock added, “It’s not easy being a sportswriter.”

With all the bases he stole, Brock told me one that he didn’t steal stayed with him during his entire career. Many point to his not sliding at the plate in Game 5 of the 1968 Series, in Detroit, for being a pivotal moment. But Brock said being picked off base by lefthander Mickey Lolich at first base in Game 7 was the one he’ll remember.

After he singled to lead off the sixth in a 0-0 game, Brock took a large lead. Brock said he figured he still could make it to second ahead of a throw from first baseman Norm Cash, who, Brock figured, would have trouble making an accurate peg as a lefthanded thrower, trying to avoid hitting Brock.

“But, you know what?” Brock asked. “He didn’t throw it wide. He threw it right past my ear.”

Brock was tagged out at second. The next hitter, Curt Flood also singled. And he, too, was picked off by Lolich. Detroit scored three runs in the next inning and went on to a 4-1 victory and the World Series title.

But he didn’t have many regrets, even all those Brockabrellas that must have been left over from one of his commercial enterprises.

Son Lou Brock Jr., said, “It’s been a long road. He’s been ill for a long time and there was an acute scenario over the last three months. But I will say (the family) was shocked. And it wasn’t that it should have been shocking, but this guy fought back from the grips of death so many times to where you almost expected him to do it. I called him the Rubber Band Man.

“My sister was here the past two months as his care giver. And we would say, ‘I don’t know what tomorrow holds for us.’ You’d go back over there and he’d be smiling and joking. It was the most incredible thing. He was always just so strong and bounced back.

“But this one . . . even the Rubber Band Man couldn’t bounce back.”

Saturday's funeral for the Cardinals Hall of Famer will be streamed live on cardinals.com.

The Cardinals' Lou Brock hits the second pitch from the Tigers' Denny McLain in Game 4 of the 1968 World Series for a home run, into the upper deck in right center, at Tiger Stadium in Detroit. The catcher is Bill Freehan, the umpire is Bill Kinnamon for the game played on October 6. (Associated Press)

The Cardinals' Lou Brock, the new single-season base-stealing champion, is amused by sign placed on the back of car by friends before being driven to Shea Stadium for a game against the New York Mets on Sept. 11, 1974. The sign reads: BROCK'S BASE BURGLARS "105" CLUB.