Subscribe
Read Today's E-Edition
Share This
‘I know how many swings I need’: Pujols jumps into lineup at cleanup on first full day back with Cardinals
0 Comments
Share this

Former aide: Trump was told protesters had weapons on Jan. 6 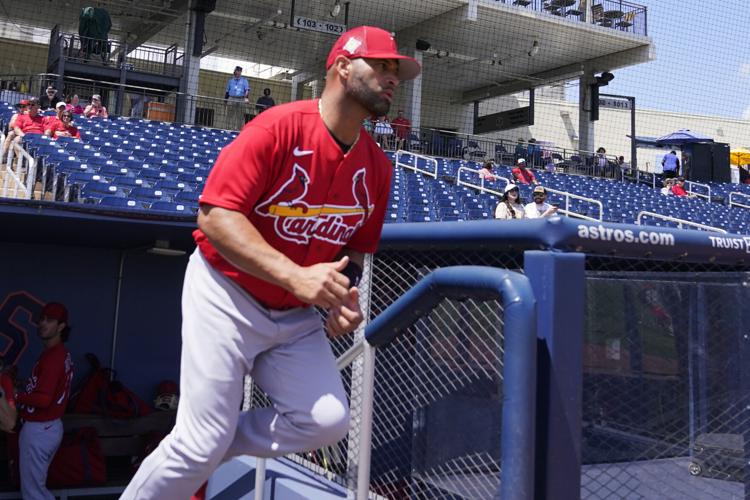 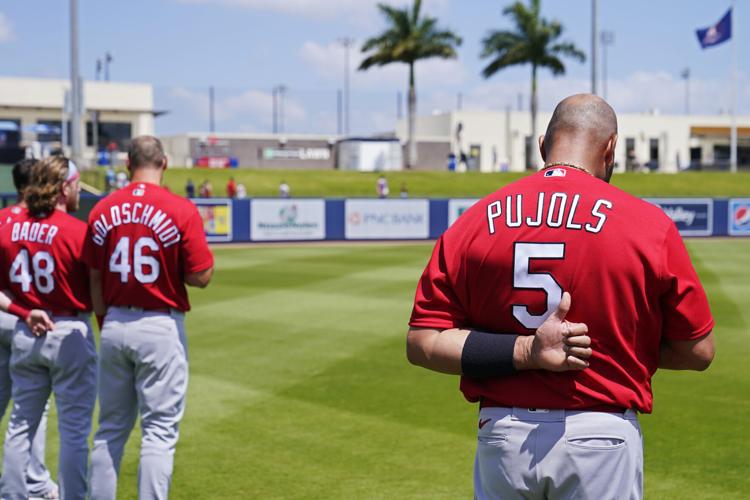 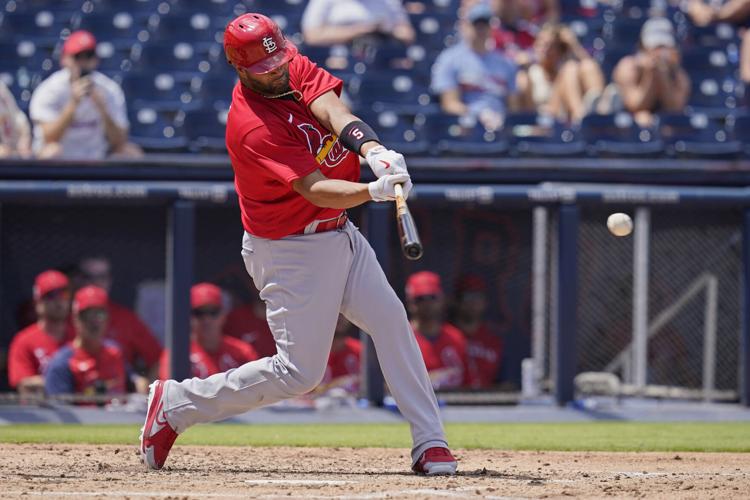 WEST PALM BEACH, Fla. — On the morning of his return to the Cardinals lineup for the first time since clinching a World Series title in 2011, Albert Pujols said a prayer and awaited word on his wife Deidre’s surgery three time zones away.

Deidre Pujols shared on Instagram that she was having a brain tumor removed early Wednesday morning and how she felt “compelled to share this private situation with you because it’s times like these that make you reflect on the fragility of life.” Her husband said he was recently at the doctor with her and discussed being away to get ready for next week’s opening day. She had family, her mother and a good support group, Albert said, and by the time he was done with his game, a text awaited him from California.

“Everything went well,” said Pujols, who said the tumor was benign. “Yes, my thoughts and my prayers are with Deidre and my family. You trust the doctors. They have that wisdom and that gift. As much as we take swings in the cage, they do surgeries. He said it’s going to be fine. A life-threatening situation — and I don’t think I would play baseball this year.”

The update from back home was part of what’s already been a whirlwind week for the three-time MVP and his emotional reunion with his first club.

The Cardinals’ offer came together quickly Sunday. Pujols jetted to camp Monday in time to reveal that afternoon he will retire this year after one “last run” in his Cooperstown-bound career. On Tuesday, an off day for the team, he got some individual attention in the cages to show his swing was ready to start at cleanup Wednesday, the same day his wife publicly revealed her medical condition. He went 1 for 3 with a single on his final swing.

“I pretty strong when it comes to (balancing emotions),” Pujols said. “I think it comes from my faith that I have with the Lord.”

Pujols said he does not plan to leave the team, not with less than a week to prepare for opening day and possibly a spot in that day’s lineup at Busch Stadium.

Pujols faced live pitching in Southern California this past week, including swings against a former teammate with the Angels. He intends to accumulate at-bats during minor-league games Thursday and return to the lineup for an exhibition game Friday. Most of his preparation for the season is done in the batting cage and always has been. Like a metronome that starts with the flick of a finger, Pujols finds his timing by swinging off a batting tee and high-velocity pitching machines.

How he did against the machines Tuesday encouraged manager Oliver Marmol to bat him fourth at designated hitter Wednesday at Washington. When Pujols came up in the first inning at The Ballpark of the Palm Beaches for the first time as a Cardinal since October 2011, the bases were loaded with no outs.

“No pressure,” he smiled. “Right away. Obviously it didn’t work out. I hit a groundball double play (that scored a run), but I put a good swing. I thought the first two swings were pretty good swing. But it’s fun. It’s not the first time that’s going to happen. I’ve been in that situation before. ... It feels good to be back in a real game, in the field, competing and facing big-league pitching.”

Pujols hit two pitches foul in his first two swings — one down the right-field line and another hooking into the seats along the left-field side. He popped up to third in his second at-bat. In the fourth inning, Pujols stung a single to right field against the shift. The runner who replaced him scored on the way to the Cardinals’ 29-8 victory.

Quite a result with Pujols back in the lineup.

“When we were game-planning this morning, that’s exactly how we drew it up,” Marmol joked.

There was a hint of how the Cardinals hope Pujols’ presence will help.

The start Wednesday was entirely about getting Pujols at-bats — as many and as soon as possible with opening day a week away — but a perk was the opposing pitcher. Washington’s Anibal Sanchez has often struggled against Pujols, and the Cardinals DH is 11 for 28 (.392) against the righthander with as many extra-base hits (three) as strikeouts (three). So much of Pujols’ success with the Dodgers last season as a part-time player came with starts and pinch-hit swings against lefthanded pitchers. The added wrinkle for the Cardinals is they plan to start him against some righthanders — righthanders like Sanchez or perhaps the Cubs’ Kyle Hendricks, who routinely vexes the Cardinals. Pujols is new to him.

“I think we’ve talked about handedness being one of the factors in how we match up but also in how they use their pitches and what type of fastball they have plays into different swing planes,” Marmol said. “We’ve talked about that with (Corey) Dickerson and (Lars) Nootbaar. Both lefthanded, but what do they get to? They complement each other in what pitches they get to. There are some righties — yeah, he’s not going to only play against lefthanded pitching.”

By Wednesday morning, Pujols had settled into a familiar spot in the Cardinals’ clubhouse — his locker nestled near Yadier Molina’s corner.

Pujols and the Cardinals agreed to a one-year, $2.5 million deal, and that salary will be paid in addition to the deferred money the Cardinals owe him from the seven-year, $100 million deal signed 18 years ago during spring training. Those $1.2 million checks started in 2020 and go through 2029. Pujols does still have a personal services contract with the Los Angeles Angels. The last of its type, Pujols’ personal service contract is a 10-year, $10 million deal available to him after he retires as an active player. He has the option to decline.

He said his thoughts Wednesday were first on his wife’s health in California, as she had a surgery he intended to keep private as family matter before the Instagram post. Deidre wrote that the tumor was discovered in October and Albert said the surgery “had to get it done.”

The message he got brought comfort, he repeated.

He’ll start Thursday much the same way — prayer and then work.

“I know what I need,” Pujols said. “Does everybody feel like they have enough at-bats this spring? I doubt it. I think everybody knows what they need to get yourself ready for next week. I know how many swings I need to take. ... I’ve got plenty of time.”

JUPITER, Fla. — Coming out of an off-day at minor-league camp, all four Cardinals minor-league affiliates were in action Wednesday against the…

Wainwright, Schumaker make prank ‘pact’ after years of mischievous capers (or, is it April Fools?)

For years, the teammates have traded practical jokes big, small, and smelly, but on the 10th anniversary of the most elaborate one a new dynamic: It's Coach Schumaker now.

Righthander faced the middle of the Cardinals' order over and over again in his final spring appearance.