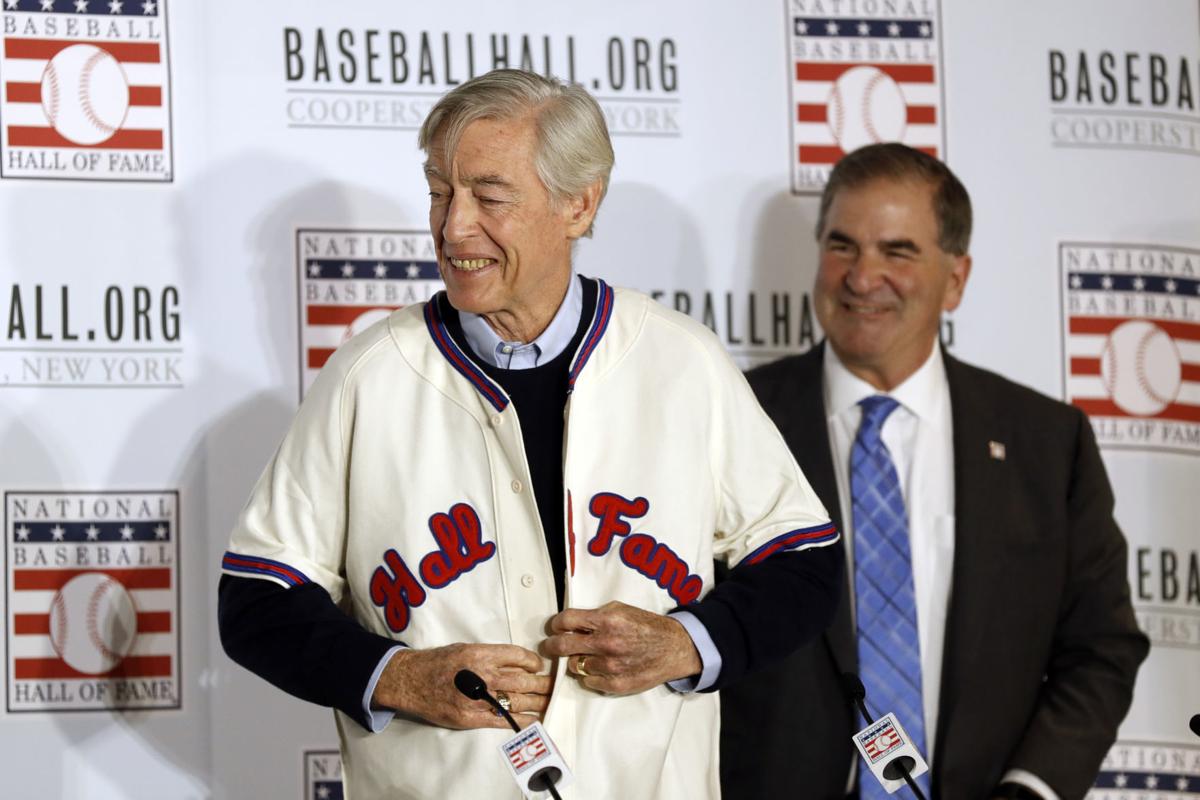 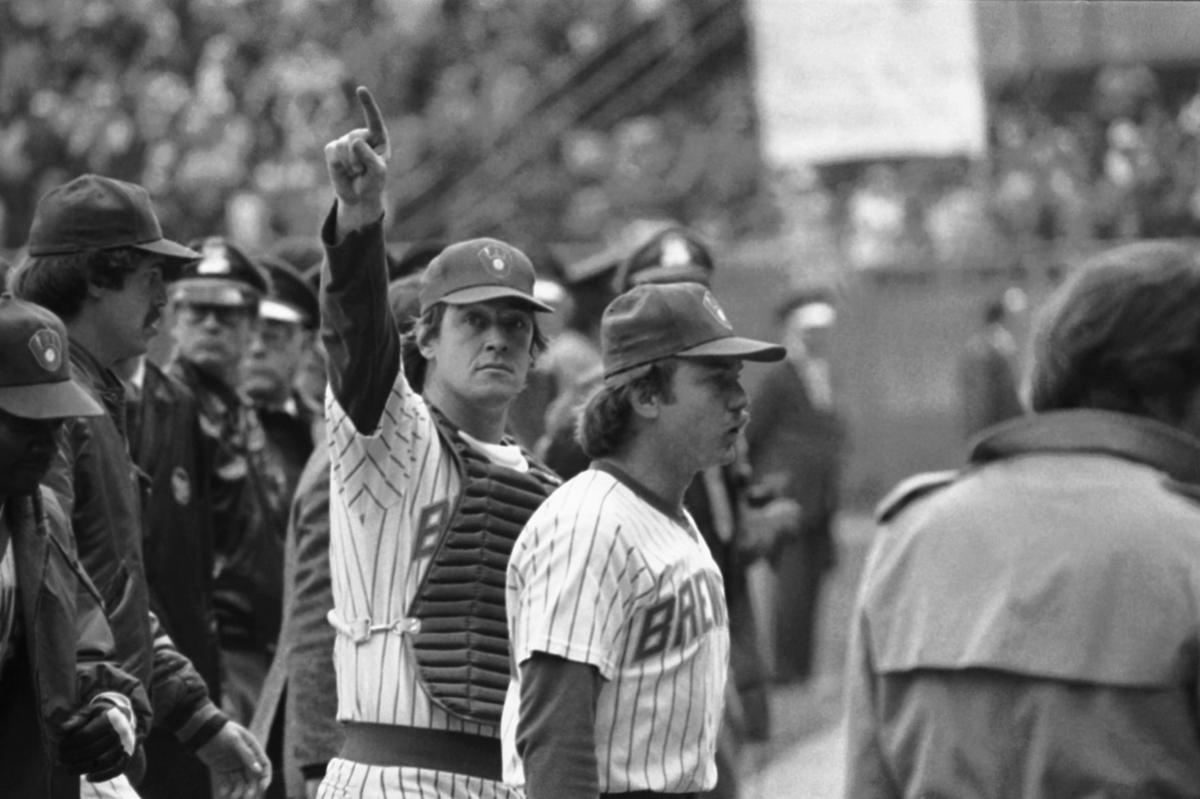 Milwaukee Brewers catcher Ted Simmons, center, turns and gives the number one sign to the crowd as he and Brewers shortstop Jim Gantner, left, leave the field after winning a World Series game, Saturday, Oct. 16, 1982, Milwaukee, Wi. The Brewers won the game, 7-5, to tie the Series with St. Louis. (AP Photo)

Quickly, who was the most recent former player elected to the National Baseball of Fame? An easy one. It’s former Cardinals catching star Ted Simmons, who gained the honor last month in recent balloting by the Hall of Fame’s Modern Baseball Era committee.

Now, a little harder one. Who was the general manager the last time the Pittsburgh Pirates won a division championship? The year was 1992 (National League Eastern Division). The answer is the same. It is Ted Simmons, who will be honored Jan. 19 by the St. Louis Baseball Writers in the midst of a big baseball week locally, with the Cardinals’ Winter Warm-Up to take place from Jan. 18-20.

When Simmons’ 21-season playing career ended after the 1988 season with Atlanta, he returned to the Cardinals as player development director after having played for them for 13 seasons from 1968-80. But he moved to Pittsburgh as general manager in 1992, joining Pirates president Mark Sauer, former Anheuser-Busch executive who later wound up running the Blues.

“I thought I wanted to be a general manager,” said Simmons. “But after 10 months in Pittsburgh, it was crisis management 24-7, 365. They were bleeding through the aorta, cash-flow wise. At the time, it was a top-heavy, upper third salary base of $47 million. We had a lot of star talent — (Barry) Bonds, (John) Smiley. The task was to get this to $19 million overnight or we were going to lose this franchise. That would be today like you’ve got to go from $150 million on your salary base to $72 million.”

This mandate from ownership came just days after the Pirates had lost Game 7 of the league championship series to the Atlanta Braves. The next June, Simmons had to get out. He had a heart attack.

“I don’t know which was worse. That 10 months or so. Or my heart attack,” Simmons said. “They were both as traumatic as anything that could have hit me at that point. But I realized that after I had the heart attack at 44 years old that ‘I’ve got to do something or I’m going to die here.’

“What might have happened? I don’t know. If I had gotten a new stadium, like they did later on or if new ownership might have funded it in a different way, we might have gone on to win the World Series. But the likelihood is that if I’m still in those shoes in that place at that time, and I’m rolling the dice back then, it was a death knell for me. I said, ‘I’ve got to go to Plan B here.’ It was something that needed to be done or I wasn’t going to be around long.”

Simmons had been a smoker since his youth, often sitting at his locker — even bare-bottomed in it — puffing away after Cardinals games, providing insight to media members.

“I stopped smoking the day I had the heart attack,” he said. “I tell people I used to smoke three packs every day and if it’s a quarter to midnight and if I only have two packs smoked, I would smoke one more pack. The reaction on people’s faces when I tell them that is like I’m coming from Mars. Well, I was coming from Mars. I was completely bullet-proof. Nothing was getting me. But, in that day, in Pittsburgh it got me.

“Even at age 44 … when that upper left arm starts barking from the cramp and you feel that, you say, ‘I’m not going through this again.’

With Simmons not able to continue that career again, he has worked with several clubs as a scout, or bench coach or in charge of player development but never was able to fill a hope of managing, except in a rare instance when a manager was gone for the day and the bench coach took over.

Such an instance was when Simmons, in San Diego, took over from manager Bud Black and faced future Hall of Fame manager Tony La Russa. The Padres won 4-0.

Before the game, it was typical La Russa.

“We’re exchanging cards and he says, ‘Well, I hope we play a full nine innings tonight,’ meaning ‘I hope you lose and I win.’ I looked at him and I laughed,” said Simmons.

“I’ve had the taste of (managing). I’m sure I would really have loved doing it. I’ve spent my life managing baseball games as a catcher on the field, in the dugout watching the opposition or watching my own team. If you’re serious about this game — if you really do love it — you can’t help but want to run it. Yeah, I have to be honest, that’s a part I did miss — or I didn’t get enough of it.

After doing most of his career damage with the Cardinals, Simmons was dealt to Milwaukee in one of a flurry of transactions made by Cardinals general manager/manager Whitey Herzog at the 1980 baseball winter meetings in Dallas. Just before the meetings were to start, Herzog signed Darrell Porter to be his catcher for the next five years. The plan was for Simmons to play first base and Gold Glove first baseman Keith Hernandez to play left field for six innings and then shift to their natural positions for the remainder of the game.

“I wasn’t comfortable with that. It’s best left there,” said Simmons.

After reflection, Simmons decided he would waive his 5-10 no-trade provision if the Cardinals moved him in a suitable deal.

“It absolutely worked out the way it was supposed to work out,” said Simmons.

“It took Whitey’s ability to sort through all that. When Whitey called me about that trade, I wanted to know if (Pete) Vuckovich and (Rollie) Fingers were in the deal. I was 10-5 and had complete control over the deal. I could have stayed. But, if they’re in the deal, I say, ‘OK.’

“It changed all our careers. Vuckovich became a Cy Young Award winner. We went to the seventh game of the World Series (losing to the Cardinals in 1982) and Rollie became what he became (a Hall of Famer). It changed everything in Milwaukee. It was a wonderful, wonderful period.”

As is this one.

“It’s a hard place to get into. It should be. There is no reason for me to feel in any way, shape or form that my journey to this place is any more or any less than anybody else’s. It is hard. It’s an excruciating wait, and until it happens for you, you just can’t describe what it’s like.”

There are many things Ted Simmons was able to accomplish in his 50-plus years in baseball. A couple — like managing and general managing — didn’t work out but he reached the ultimate individual goal.

“It was one of the biggest injustices ever that he was taken off the ballot after just one election,” said former Cardinals relief ace Al Hrabosky, a longtime teammate of Simmons. “It’s taken a long time — but it finally got corrected.”

Pitcher is detained in Dominican, apologizes.

Going the distance with Cardinals: Scenes of history, hope through 14 states, 7,168 miles

Post-Dispatch baseball writer Derrick Goold hit the road to cover an unusual season from the ground up with a mask on, through a country on the edge.

Fox Sports Midwest's owner wants to get viewers to shift from traditional TV to its new app.

Fans can still get player autographs via the team's website.

New tie-in with betting operation will lead to name change for channel. The plan is that it eventually will accept bets on games it televises.

Milwaukee Brewers catcher Ted Simmons, center, turns and gives the number one sign to the crowd as he and Brewers shortstop Jim Gantner, left, leave the field after winning a World Series game, Saturday, Oct. 16, 1982, Milwaukee, Wi. The Brewers won the game, 7-5, to tie the Series with St. Louis. (AP Photo)