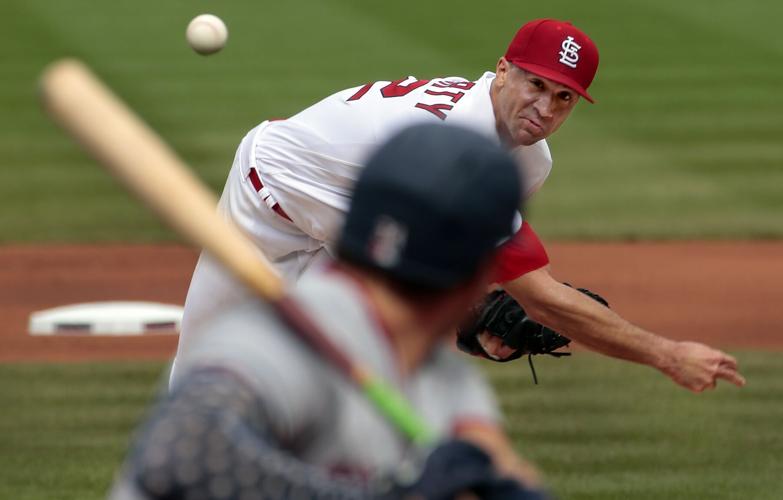 Cardinals starting pitcher Jack Flaherty works the first inning against the Nationals on Monday, Sept. 5, 2022, at Busch Stadium. Flaherty and Jordan Montgomery joined shortstop Tommy Edman as three of the seven players who finalized salaries on one-year contracts with the Cardinals on Friday. 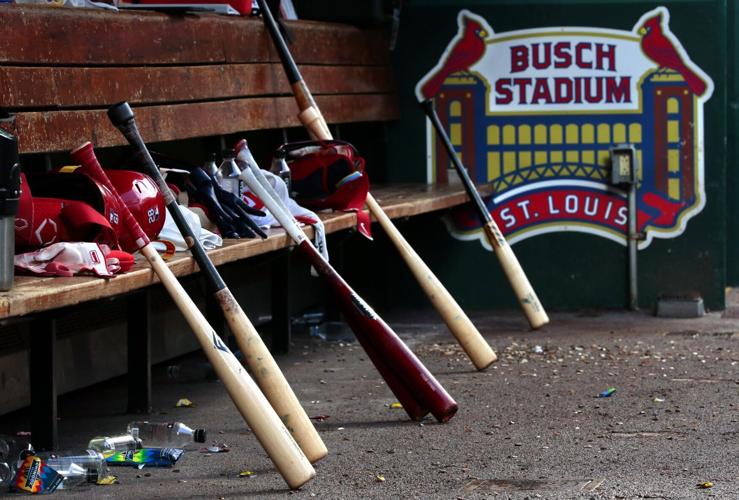 The Cardinals' bats were quiet against the Nationals, producing only three hits in a 6-0 loss on Monday, Sept. 5, 2022, at Busch Stadium. 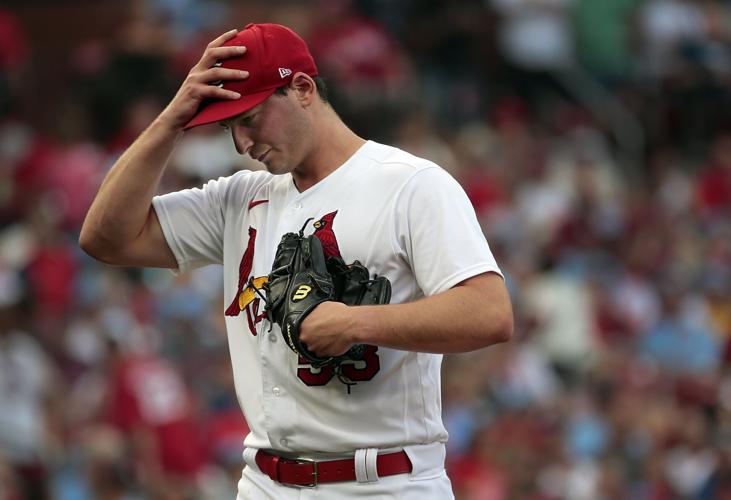 Cardinals relief pitcher Andre Pallante is removed from the game after giving up two runs in the sixth inning of a game against the Nationals on Monday, Sept. 5, 2022, at Busch Stadium. 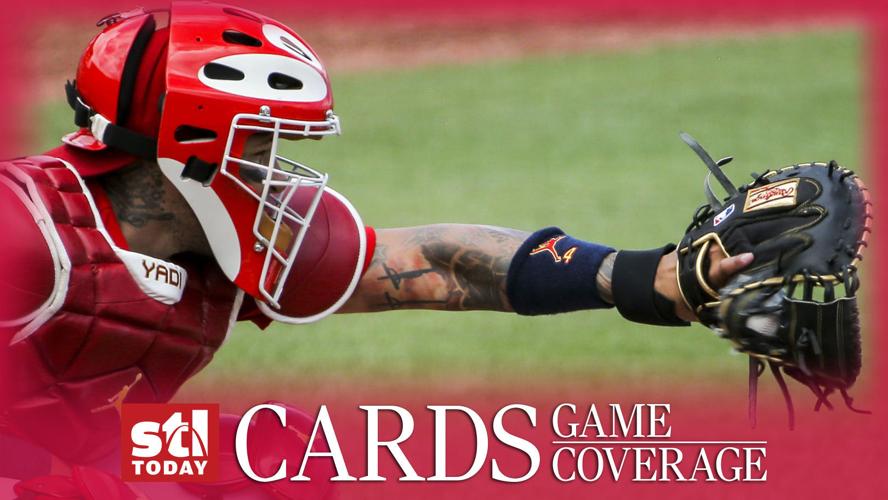 The Cardinals’ 6-0 Labor Day loss to the Nationals was ultimately forgettable by everyone in red — “That game could not have ended quick enough,” manager Oliver Marmol said — but even in a lopsided defeat with an offense that managed three hits, only one of which got out of the infield, it managed to hold promise.

That was because of the return of staff ace Jack Flaherty, who made just his fourth appearance in a season that has been overwhelmed by shoulder troubles. He struck out six, walked one, hit a batter and allowed just one run in five innings, his longest big-league outing this season, which right there tells you how things have been going for him.

“Jack was encouraging,” Marmol said. “I thought he did a nice job. It looked good; it was promising. The fastball plays, the (velocity) was there, shape of the other stuff was also there, command in and out, but it’s only going to improve from here. Slider whiff rate was good. Got eight outs with it. Overall, I would describe it as an encouraging outing for us.”

Not that the Cardinals need much encouragement as they have taken command in the NL Central, but every bit helps. The Cardinals lost and the Brewers won on Monday, marking the first time since Aug. 13 that they lost a game in the standings to the Brewers, who are now 7½ games back.

The game was certainly not a straight line for Flaherty. The Nationals got a runner on in each of his five innings, including multiple runners in the third, fourth and fifth innings.

But Flaherty responded to those challenges. With a runner on second and one run in the third, he struck out the next three hitters. With runners on second and third and one out in the fourth, he got out of the inning without allowing a run. He did the same with runners on first and third and one out in the fifth. Had it not been for Tyler O’Neill’s failed attempt at a diving catch on a fly ball by CJ Abrams in the third that went for a triple and ultimately a run, Flaherty could have gotten through his five innings without allowing a run.

“You pitch the way the game goes. Certain times in the game you’ve really got to make pitches in those situations and leave those runners out there, leave a couple of guys on base. I was able to execute when I needed to. You would just like to see it early so you don’t get into those spots.”

Flaherty’s fastball was clocked as high as 97.1 mph (to Luke Voit in the first), and he struck out Josh Palacios at 96 mph in the fourth.

“When he needed to reach back and get after it, we saw some 97s,” Marmol said. “Yeah, it’s in there, and he can go and get it when needed. Pitched in the low to mid-90s, and I like what we saw.”

“It gives us another weapon,” said designated hitter Paul Goldschmidt. “The guys have been great without him through this year, and we’ll take all the guys we can get out there. He looked great out there.”

“When he’s throwing that hard, he’s going to be really big player for us,” said Andre Pallante, who came in for Flaherty in the sixth and gave up four runs on a collection of nicks and paper cuts. “When he came back the first time, he was kind of in that 92, 94 range. So having him back up there is definitely a lot nicer.”

That first time, back in June, Flaherty pitched in three games and, facing a pitch limit in the first two as he belatedly started his season, went only three innings. In the third game, he went only two before getting pulled. But he made five rehab starts this time to get ready, throwing 102 pitches in the last one. There were no limits in his return, and he came out after throwing 91 pitches, 59 for strikes, after the fifth.

Flaherty said that just like the last time, he could feel an extra bit of adrenaline for the start, but he tried to channel it in a different way.

“I think this time I just didn’t try to play it down, just ran with it,” he said. “That’s something I do a little bit better than trying to play it down. Take the emotion, take the adrenaline and just run with it instead of trying to suppress or push it down. It was fun. Like to see me get ahead earlier get to those leadoff guys.”

“I thought he controlled his emotions well,” Marmol said. “His poise was good. He made adjustments as the game went on. You could tell he was battling the fastball a little bit, commanded it well enough. Leadoff man out only one of the five innings, and he was still able to kind of navigate through that. I thought it was a really encouraging outing. Looking forward to him taking the bump again.”

“I’m excited with the position the team has put us in,” he said. “To be in the spot where we’re at, and the chance that we have going forward to make a run at this thing. It’s been fun watching. But it’s more fun to be a part of it.”

Cardinals notebook: Hudson gets sent to Memphis, but will be back shortly

Native St. Louisan Caray is a longtime baseball broadcaster who has been calling Atlanta Braves games.

After winter revamp of swing in ‘the lab,’ Paul DeJong eyes decisive spring with Cardinals

"We need him to be that 7:15 hitter," says John Mozeliak about former All-Star shortstop Paul DeJong, who embraced change to rebound from struggles.

The grandson of legendary broadcaster Harry Caray is the leading candidate to replace Dan McLaughlin on Bally Sports Midwest telecasts.

Aaron Goldsmith's decision to stop pursuing the St. Louis Cardinals broadcaster position was based on his happiness in Seattle.

Jordan Walker, Masyn Winn, and Tink Hence have known each other since high school. Now they're rising prospects with the Cardinals.

A force at third base, Scott Rolen leads Cardinals recent champs into the Hall of Fame

Whether he had to wait another year or he received the highest honor that echoes for every year to come, Scott Rolen promised his family Tuesd…

Scott Rolen caught a wave of belated voter support and rode it to Cooperstown with his narrow election victory.

Cardinals starting pitcher Jack Flaherty works the first inning against the Nationals on Monday, Sept. 5, 2022, at Busch Stadium. Flaherty and Jordan Montgomery joined shortstop Tommy Edman as three of the seven players who finalized salaries on one-year contracts with the Cardinals on Friday.

The Cardinals' bats were quiet against the Nationals, producing only three hits in a 6-0 loss on Monday, Sept. 5, 2022, at Busch Stadium.

Cardinals relief pitcher Andre Pallante is removed from the game after giving up two runs in the sixth inning of a game against the Nationals on Monday, Sept. 5, 2022, at Busch Stadium.