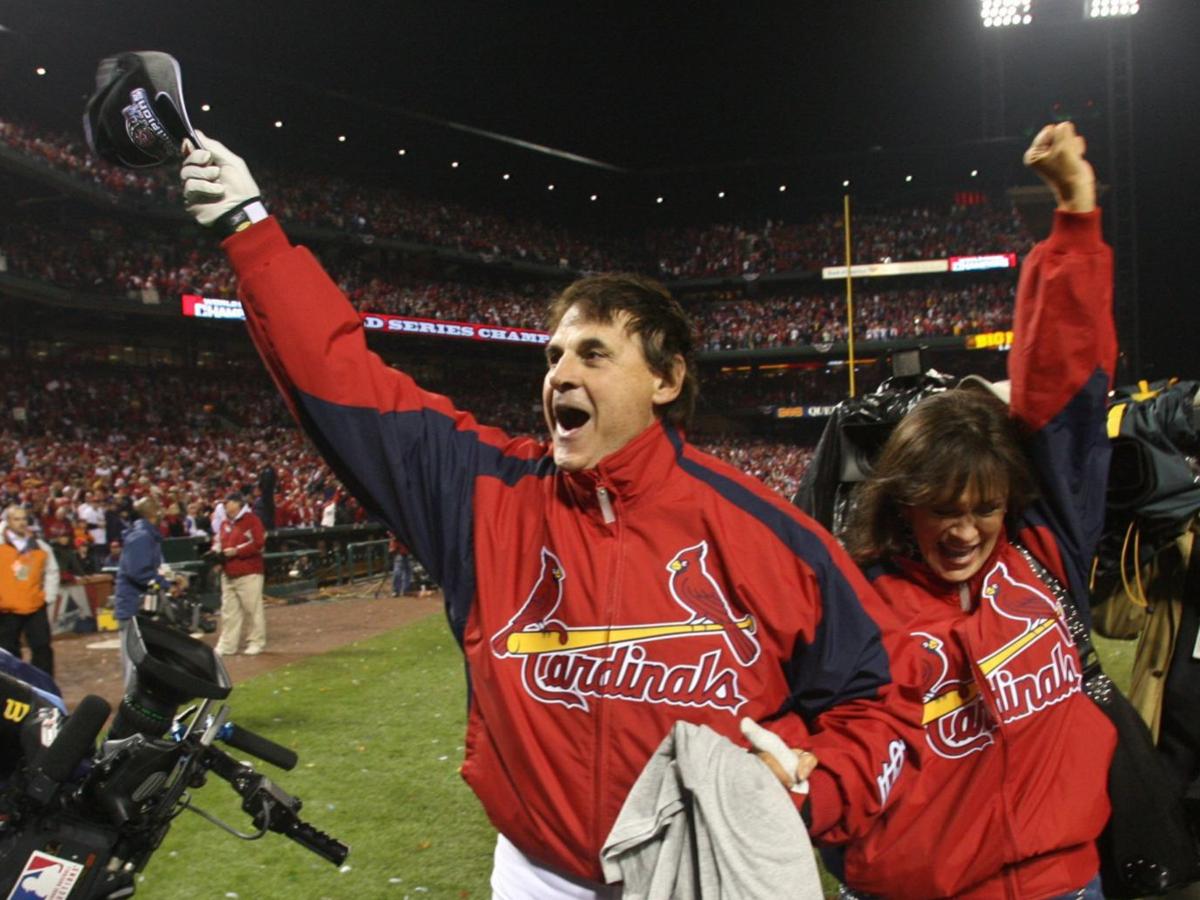 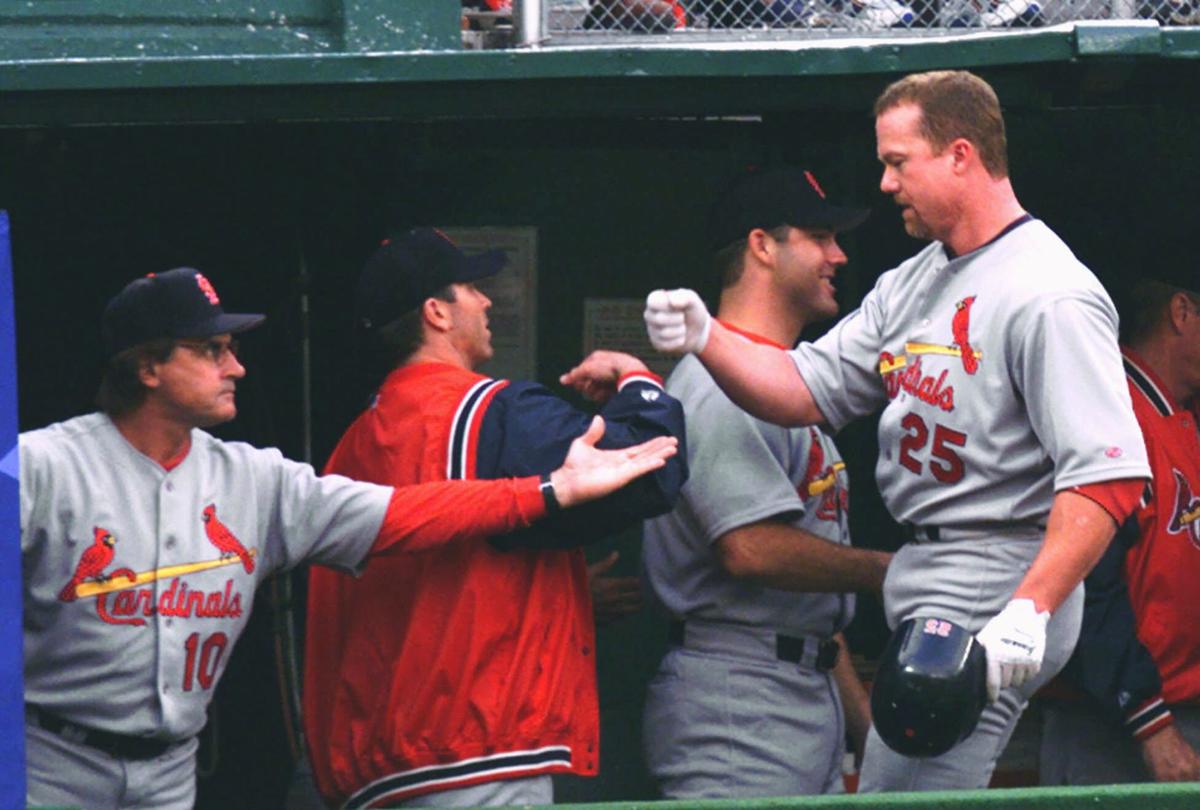 Cardinals slugger Mark McGwire is congratulated by manager Tony La Russa after his second home run of the night off the Phillies' Curt Schilling in a game at Philadelphia in the 2000 season. (AP photo) 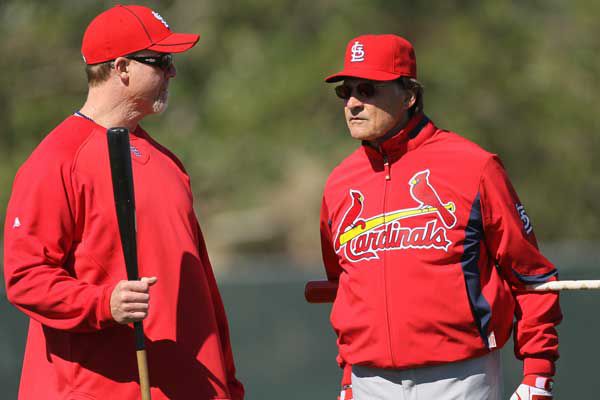 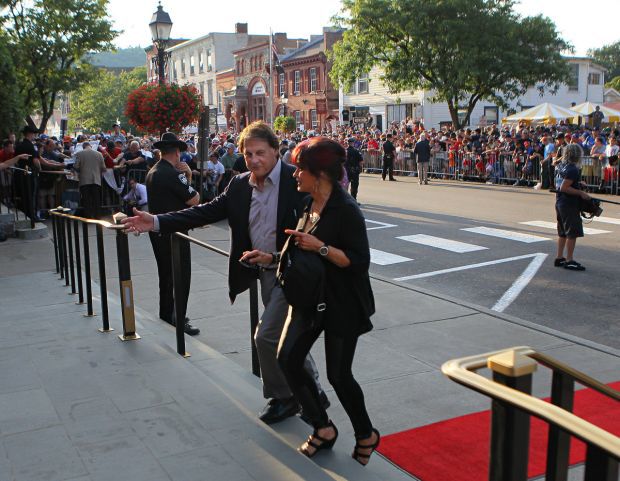 Tony La Russa walks into the Baseball Hall of Fame with his wife, Elaine, after getting off a truck that carried them in a parade through downtown Cooperstown, N.Y., on Saturday, July 26, 2014. (David Carson, dcarson@post-dispatch.com)

Tony La Russa never was one to back down, as the manager of the Cardinals or two other big-league teams, and still is swinging away in his post-managerial life about a variety of topics in baseball and his sometimes rough private life.

La Russa, in an interview that is scheduled to air this weekend on the latest version of the nationally syndicated “In Depth with Graham Bensinger” show, continues to defend himself and the sluggers he oversaw with the Oakland Athletics who became central figures in baseball’s steroids scandal. That includes Mark McGwire, whom he also managed for the Cardinals. Dave McKay also was with La Russa on both teams, on the coaching staff.

“All we know is Dave McKay ran a pure program, no doubt in my mind — in anybody’s mind,” La Russa says on the show, which is to air locally at 10:30 p.m Sunday on KTVI (Channel 2). “What you did on your private time, we’re not policemen. We don’t go watch ‘em. . . . Fans don’t trust any of us. So what I’m telling you, you can believe or not believe, but is the truth.”

La Russa and McKay were with the Cardinals in 1998, the height of the steroids era, when McGwire shattered Roger Maris’ longstanding single-season home run record of 61. McGwire blasted 70 that year and the Cubs’ Sammy Sosa belted 66.

In 2010, when McGwire was returning to baseball as the Cardinals’ hitting coach, he acknowledged he had used steroids for nearly a decade but insisted they did not boost his home run totals. In the program La Russa plays down McGwire’s steroids use to Bensinger, a St. Louisan.

“Mark McGwire, who has been in my opinion very seriously tainted — and unfairly — Mark agreed that he used a little bit for a short period of time,” La Russa says. “Most of the stuff that he used, yeast extract, he used HGH (human growth hormone) for his heels. It wasn’t a prescription.”

He also is asked about McGwire’s appearance before Congress when it was investigating drug use in baseball, when McGwire said he was not there “to talk about the past.” That drew ire from many corners.

“I felt bad for him because I know how he is and the quality of the man personally and professionally,” La Russa says. “I think it’s a blip on the radar. I’ve been accused of (having) a blind eye. I don’t think so.”

Bensinger, in a conversation with the Post-Dispatch, said his interview with La Russa was taped in November. That’s before former White Sox pitcher Jack McDowell made allegations that La Russa used a camera-aided sign-stealing system when he managed that team in the 1980s. So that isn’t addressed.

In contrast to his steroids thoughts, La Russa is very introspective when addressing his personal life.

Bensinger points out that La Russa’s relationship with his first wife and their two children is “nonexistent.” And he discusses peculiar moves by La Russa in his interactions with his current wife, Elaine, and the two daughters they have from their marriage in 1973.

An incident in 1992, when La Russa was managing the Athletics in a playoff series, is discussed.

“I got really into what the score was,” La Russa says. “That night . . . I drive home and I’m about halfway there and went, ‘I forgot something.’”

That “something” was his girls, who were left at the ballpark, and emblematic of the way he immersed himself in his job at the expense of his family.

“It’s a mistake that’s unexplainable, inexcusable,” he says. “I screwed up.

“I was way too invested in trying to do the job right and carrying stuff to the point that I have never forgiven myself. I think they have forgiven me. . . . If there’s a lesson to learn there, once you do the best you can you’ve got to turn the page. Unfortunately they probably got used to it and they expected less and took it for maybe ‘that’s the way it’s supposed to be.’ Including Elaine. I try to make up for it ever since.”

Bensinger, who spoke to Elaine while preparing for the interview, says on the show that on Father’s Day the daughters would send cards to their mother, not dad.

“Elaine did it by herself basically for 30-something years,” La Russa says. “I can totally understand them thinking she was mother and father. I think they were making a point (to her) of saying, ‘We know how special you are.’ If you look at the number of hours you have with that family, it’s not very many. So you have to maximize every minute of it, not do what I did — which was have half my brain there and the other half . . . thinking about your lineup.

He called himself an “occasional visitor” to his family and tells of a time his wife had pneumonia and the team was struggling. He had his sister take care of the family.

“What kind of message is that?” La Russa asks. “What’s more important? The Chicago White Sox or your wife and children?”

But Bensinger said La Russa’s wife was very understanding, telling him “’How many people in their lives are actually given the opportunity to live their dream? How could I possibly deprive him of that?’”

A more pleasant portion of the show centers on La Russa’s devotion to Animal Rescue Foundation, which he founded in the San Francisco Bay Area. It has aided thousands of dogs and cats that needed homes, and has trained rescue dogs to be service animals for military veterans having trouble making the transition back to civilian life.

“We’re saving lives at both ends of the leash,” La Russa says. “. . . We pay all the costs. And the number of veterans, the testimonials have totally inspired us early on to keep going and do more and more. That wagging tale, it’s magical and that’s become more and more part of our life.”

The show spends some time at the ARF facility and at a fundraiser for the program that was attended by numerous prominent athletes and high-ranking military officials.

“I really had no magnitude of their operation,” Bensinger told the Post-Dispatch. “They are undergoing a massive expansion of their facility. La Russa is on the front lines of all of this.”

La Russa is the winningest manager in Cardinals history and was inducted into baseball’s Hall of Fame in 2014. It has been nine seasons since he last managed, with his final game being the Cardinals’ victory over Texas in Game 7 of the dramatic 2011 World Series.

He has had a variety of off-field baseball jobs since and now serves as a senior adviser for the Angels. But he acknowledged to Bensinger that he thought about returning to the dugout this season, at age 75.

He says he would have done so only if his trusted assistant Dave Duncan (“the greatest pitching coach in the history of the game”) would join him.

“I kind of ran it by him by him, ‘Hey Dunc, you want to come back?” La Russa tells Bensinger.

The answer was negative.

“If Dunc had said yes, then it would have been possible,” La Russa says. “But Dunc said no.”

Program: "In Depth with Graham Bensinger"

Rick Hummel launches 'Where Are They Now?' series by catching up with Tom Pagnozzi, who assesses the four Hall of Fame managers for whom he played.

Cardinals demote Reyes, Cabrera to Class AAA as part of moves on what would have been opening day

Knizner and Fernandez also optioned to Memphis as MLB teams continue to make moves to narrow rosters toward their eventual 26-man limit.

Donation from the pitcher and his wife will specifically help Cardinals players who aren't making salaries during the stoppage, and need assistance.

Rick Hummel launches 'Where Are They Now?' series by catching up with Tom Pagnozzi, who assesses the four Hall of Fame managers for whom he played.

Cardinals' Miller pitches in to forge agreement with owners, continues progress with his arm

It’s been a good few days on a couple of fronts for Cardinals reliever and platers' association rep Andrew Miller.

Cardinals slugger Mark McGwire is congratulated by manager Tony La Russa after his second home run of the night off the Phillies' Curt Schilling in a game at Philadelphia in the 2000 season. (AP photo)

Tony La Russa walks into the Baseball Hall of Fame with his wife, Elaine, after getting off a truck that carried them in a parade through downtown Cooperstown, N.Y., on Saturday, July 26, 2014. (David Carson, dcarson@post-dispatch.com)