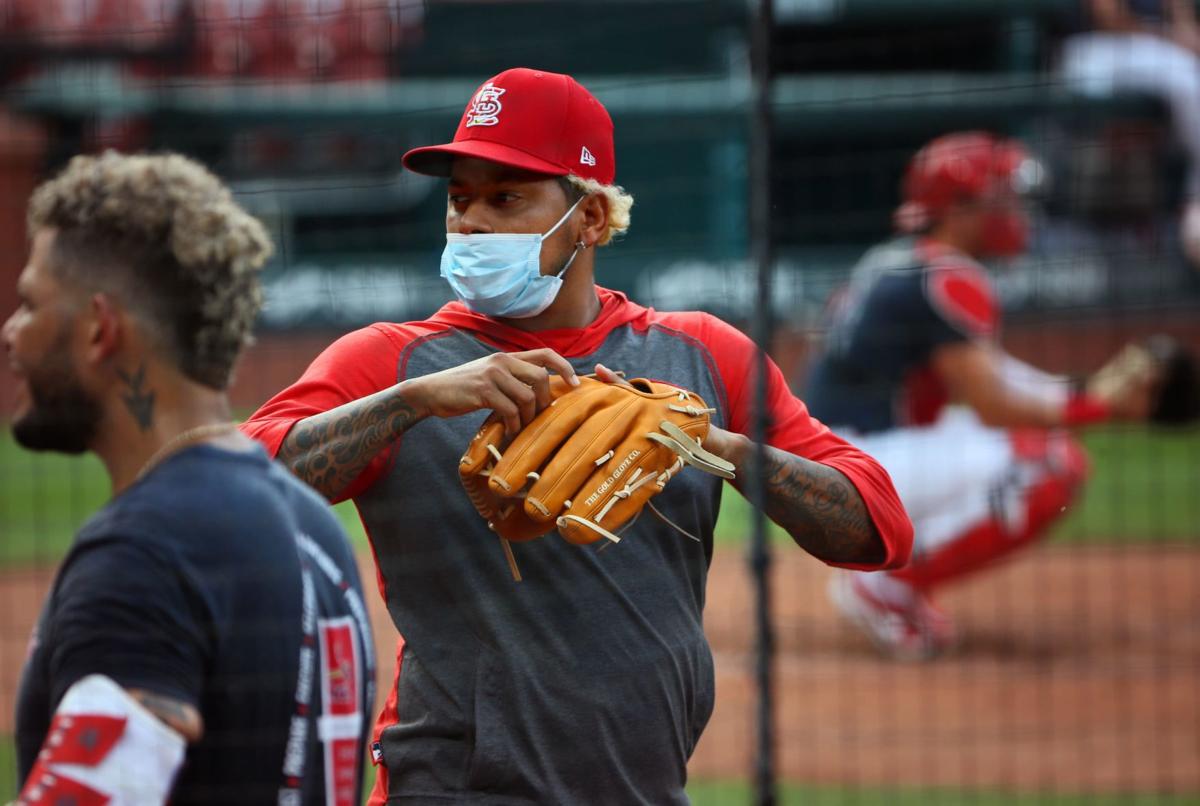 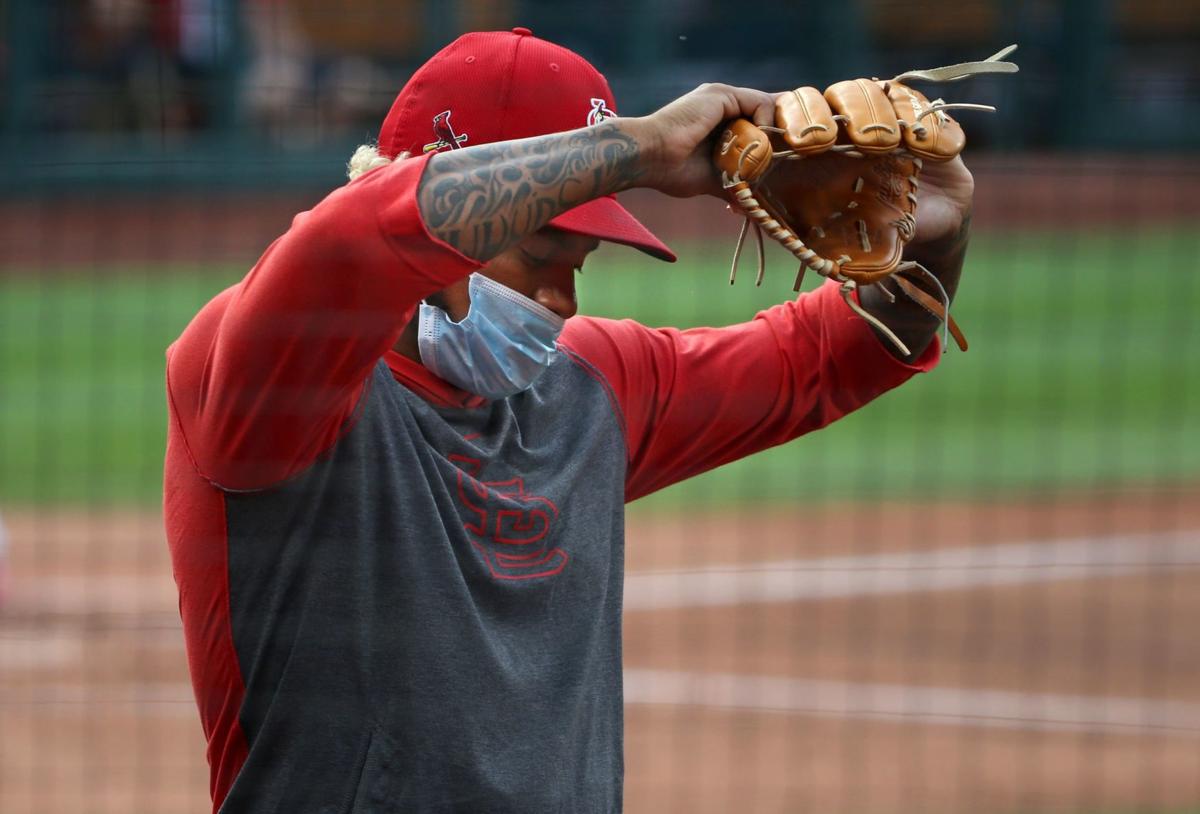 After he had asserted his health with his first couple of innings against batters Tuesday night at Busch Stadium, Miles Mikolas ran sprints in right field and was just about done when he saw one of the last teammates he or anyone hadn’t since “Summer Camp” convened.

That was Carlos Martinez, tested and cleared and joining official workouts, who walked toward the bullpen. As he passed, Mikolas went to greet him — and paused.

This was a high-five moment in a land of no high-fives.

“It was an awkward high-five elbow bump?” Mikolas said. “You want to do your old, fun handshakes with everybody, but you can’t. It takes a little more adjusting.”

On the field finally Tuesday at dusk, the Cardinals had just been through 48 hours of adjusting to what John Mozeliak, president of baseball operations, called the “new normal.” A day after canceling a workout because they did not have their COVID-19 test results, the Cardinals had their morning workout Tuesday postponed to an uncertain time later that same day. The results of their tests were delayed again due to logistical issues with Major League Baseball’s process, and that meant holding off on official workouts until the team and players were more confident in their health and safety.

Around 6 p.m. — seven hours after the original advertised media availability at the ballpark — the Cardinals were on the field, and all of the results returned were negative. That allowed for a new influx of players that included reliever Junior Fernandez, 2019 first-round pick Zack Thompson, lefty Rob Kaminsky, and Martinez. The former All-Star had taken a test on Friday and did not have the results needed to participate until Tuesday, some two hours before the start of the workout, an official said.

Manager Mike Shildt said of all the players caught in limbo by the lag in results “the biggest person this affected as far as a lapse in steps” was Martinez.

One of the last players to leave the field Tuesday night, Martinez followed a parade of pitchers who got their first tests of summer after leaving spring with injuries. Mikolas (forearm strain) made swift work of his two innings, and relievers Andrew Miller (arm) and Brett Cecil (strained hamstring) each pitched a snappy inning.

Cecil unveiled a new delivery — slinging pitches sidearm in a way he has just committed to after consulting with pitching coach Mike Maddux. Like Cecil with his new arm slot, Mikolas was eager to see how hitters looked against his restored health.

“That last little bit of adrenaline that kind of (kicks in) and how you handle that,” Mikolas said. “Get somebody in the box to give you feedback. I got through it quicker than (40 pitches). I was throwing strikes. I was pretty happy with that.”

The Cardinals concede they’re being “conservative” with Mikolas, and they also had starters Jack Flaherty and Dakota Hudson only throw two innings in their first live batting practice outings. (Adam Wainwright went four innings; Kwang Hyun Kim went three.) It’s possible that some of the starters will leave the 21-day camp able to throw around 80 pitches — less than the 100 usually targeted at the end of spring. The time is limited to build pitch count, but pitchers like Mikolas, Cecil, and Miller were passing health checkpoints all along.

“I think that’s a normal question you would ask, but a lot of these guys have been throwing,” Mozeliak said. “Our major-league staff has been in contact throughout our absence during this pandemic. So, it’s not like we’re laying our eyes on them for the very first time. Mikolas and Cecil were both in Jupiter (Fla.). What you need to see now, as you’re starting to really think about your 30-man roster, is who is going to be a resource as you enter that opening day roster. That’s all we’re trying to think through.”

The righthander spent all winter and went through spring determined to make a return to the rotation. He did that by embracing a starter’s regimen and, Shildt said, becoming more “consistent” in all his work, health, and stamina away from the mound. The results showed. During baseball’s stoppage, Martinez worked some at the Jupiter facility and also back home in the Dominican Republic. He sent videos to Maddux of his bullpens and his times facing hitters, Shildt said.

Still, the Cardinals had been eager to see him in person — see his fitness, his readiness, and get a gauge on his stamina before determining if he would start or possibly close during the 60-game dash.

“He more than earned the opportunity with what he showed in spring training,” Shildt said of Martinez starting. “Now it’s just a matter of the calendar a little bit, and what that looks like and how we can move him forward.”

Martinez threw a bullpen session for his coaches Tuesday night, and they’ll use that to gauge when he’ll be ready to face hitters. It will be Thursday at the earliest, though possibly Friday if they want to have him go through another eye test. The weekend Martinez spent waiting for the results of his COVID-19 test delayed his throwing schedule and forced a rewrite of the team’s schedule. An intrasquad game planned for Wednesday has been pushed back to Thursday, and Monday’s scheduled off day may not be, spending on weather.

The Cardinals were not alone as the Giants canceled workouts Tuesday and the Cubs delayed theirs because of issues each had getting prompt results on tests. Twice Mozeliak said it was not wise to “point fingers,” but the frustration from coaches, players, and management was clear. This has to be fixed, swiftly. What happens if the same hiccups come after games have started? It was just one more example of an “awkward high-five elbow bump.” Nothing is normal, not even going up to pick up a bat for a hitter.

With no batkids to retrieve the bat, Shildt did that once during the live BP Tuesday and dutifully followed virus protocols by lifting it and carrying it without ever touching it. He used his feet to lever the bat’s handle off the ground and into an angle so that in one move he could wrap a hand in his shirttail and grab the bat’s knob.

“We have a group of elite-adjusters,” Shildt said. “I applaud the mindset of this group. Obviously, rightfully, frustrating with the inability to get the results back and some of the testing. We understand it’s not a perfect system. We’re not here to complain about it. We’re working within it.

Cardinals' World Series hero Anthony Reyes was a starter — but he puts out fires now.

He started Game 1 in 2006 Series win over Detroit Tigers.

Lefty Sherriff's addition to the Rays roster gives a distinct Missouri vibe to Tampa Bay's 'stable' of relievers, with a Webster Groves grad at closer.

Three NL Central catchers were selected ahead of Molina as a finalist for the award at catcher as voters were not used this season, just metrics.

''He has a chance to be a good player,'' a Cardinal executive said after a deal that flew under the radar for most baseball observers.

Beloved outfield coach, who has high blood pressure, stepped away after the team's coronavirus outbreak.

Goold: How Dodgers got a steal in Mookie Betts

There's an added value in stolen bases that Betts showcased in Game 1 of the World Series and has been overshadowed by advanced metrics. And it's not just the free taco.

Two years after his sudden release by the Cardinals in the midst of rehabbing from elbow surgery, Sherriff made his World Series debut with a scoreless inning for Rays.