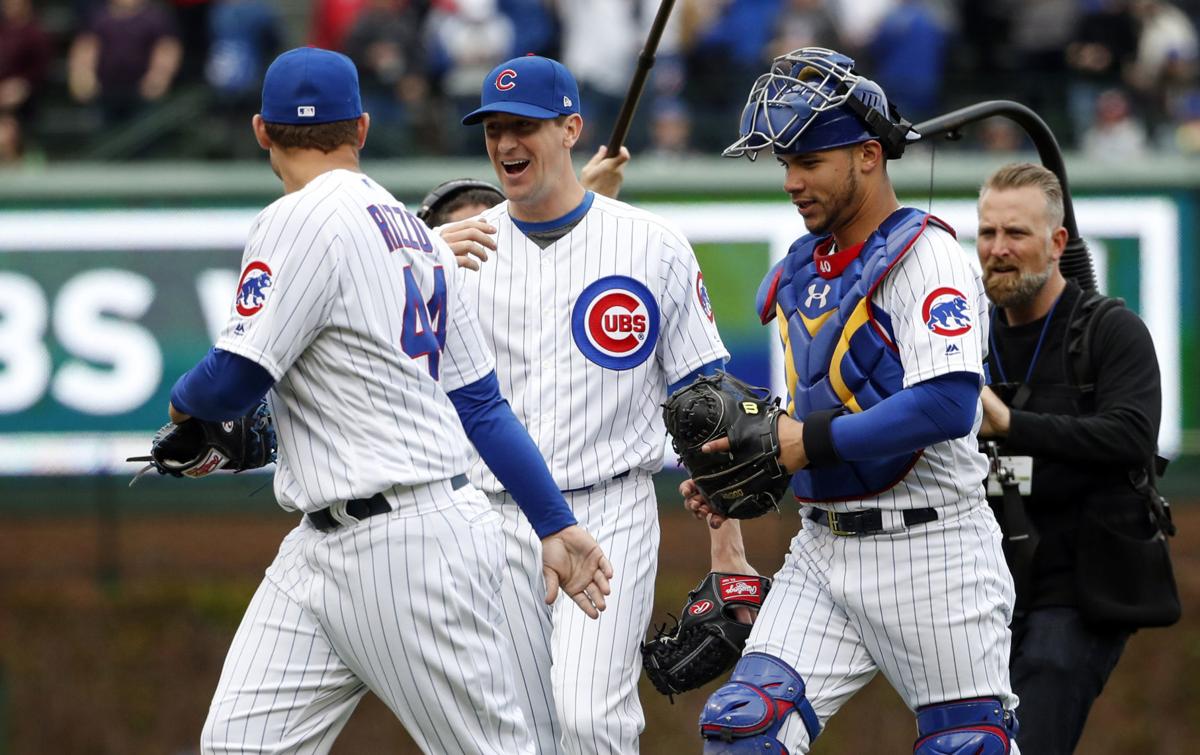 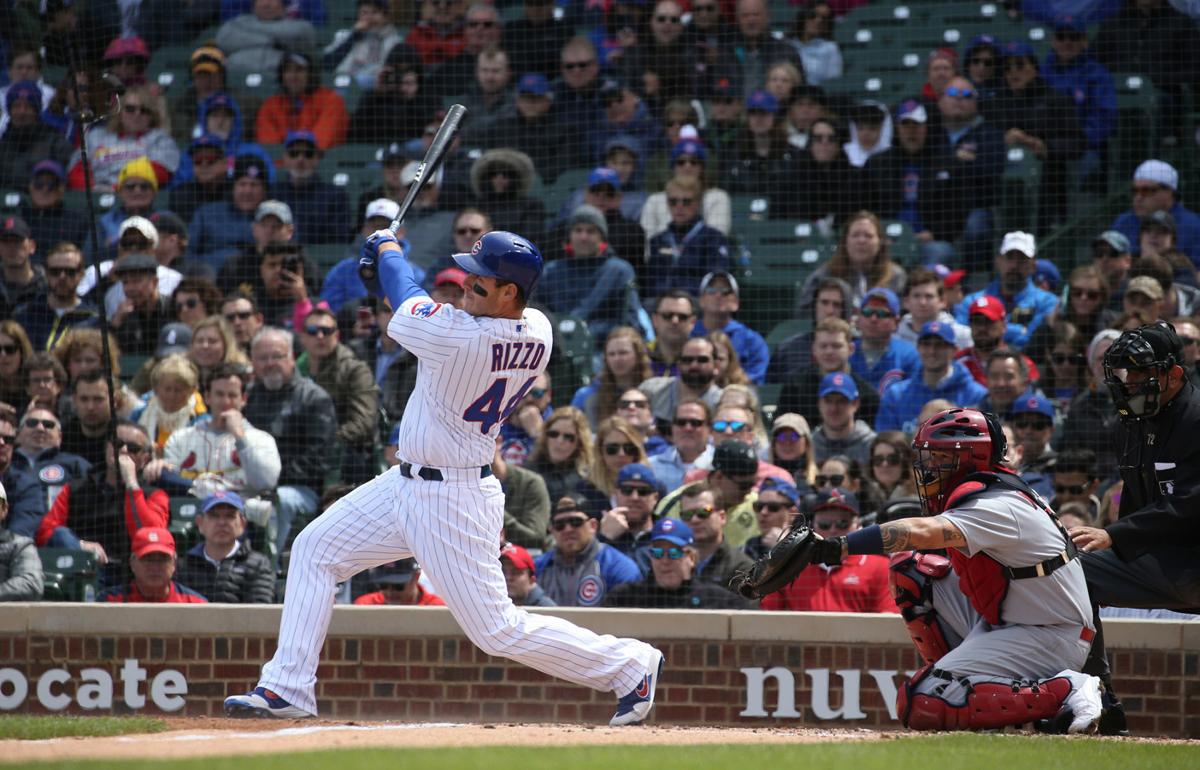 CHICAGO — They didn’t see many pitches to begin with. And of the few from Kyle Hendricks the Cardinals did hit, most vanished — predictably —into a Cub’s glove.

Shifted to the left of his base, Cubs second baseman Daniel Descalso stole a hard-shot single from Paul DeJong. Racing in from center, Jason Heyward slid to rob Jose Martinez of a sinking-liner single. Marcell Ozuna had nothing to show for a hard liner to right and a harder grounder down the third-base line, and the hardest of Matt Carpenter’s bolts — a 100-mph liner off the bat — was caught, unceremoniously, by Anthony Rizzo at first. It’s sure tricky to hit ‘em when there’s nowhere they ain’t.

Putting the ball in play catered to Hendricks’ brisk pace, fell into the Cubs’ rigged defensive traps, and left the Cardinals going scoreless Friday for the first time this season. In a 4-0 win at Wrigley Field, Hendricks needed only 81 pitches to author arguably the most efficient shutout ever by a Cub against the Cardinals.

The game turned on the Cardinals’ inability to wedge hits between the defense, and the Cubs not having to bother. Two walks in the third inning preceded Rizzo’s three-run homer that simply sent the game’s decisive hit where the Cardinals couldn’t go, the bleachers.

“We got beat. We didn’t beat ourselves,” Cardinals manager Mike Shildt said. “We hit some balls at people. That’s part of the game. (Hendricks) did a nice job, he really did. That was pitching, the art of pitching.”

With fewer brushstrokes than any pitcher has needed to shut out the Cardinals since 1990, Hendricks held them to four hits, and the only Cardinal to reach second base was pitcher Jack Flaherty. He had to steal it.

A “Maddux,” named for Hall of Famer Greg Maddux, is a shutout that requires fewer than 100 pitches. It’s a control freak’s gem. And since pitch counts have been reliably tracked, only Doug Drabek got through nine shutout innings against the Cardinals in fewer pitches. Took him 80 on Sept. 30, 1990. Maddux himself needed 88 to pull off a Maddux against the Cardinals in 1995. In the past 30 years, no Cub has shut out the Cardinals in less than 114 pitches, according to Baseball-Reference.com.

“He did what he does every single time,” Cardinals infielder Kolten Wong said. “He attacked with what he has. He tries to use the deception and your aggression to get you out. That was something that we talked about — we tried to keep him in the zone but not take too many pitches. He’s going to throw strikes. It’s just a matter of if you can sneak some base hits in there and get him.”

That’s in large part because of the picket-fence defense so many of the Cardinals faced so many times they made contact against Hendricks (2-4).

The first meeting of the 2019 season between the Midwest’s oldest rivals was really a continuation of the modern saga. Both are good. Both intend to contend.

The Cardinals arrived in first place in the division, 2½ games ahead of the Cubs, and winners in 11 of their past 14 games. The Cubs came from the West Coast, buoyed by a four-game winning streak. If either team saw this series as a measuring stick — eyeballing a chief challenger — then it was really more of the same. The Cubs already know the Cardinals like a good tailor. They’ve been sizing them up for a few years, trimming them back, fitting them for third place. Look no further than where they tuck their outfielders, where the seams are in their infield.

Hendricks finished the fifth inning and got his 15th out on his 48th pitch. Five of the next six outs came on strong defensive plays or plays made by a shifted infielder. Twice a Cardinal stung a pitch up the middle — only to see an infielder standing there as if with a magnet. Ten of the game’s 15 hardest-hit balls were by Cardinals. Hendricks’ efficiency was aided by scouting proficiency.

“There are not a lot of secrets out there,” Shildt said.

“We play each other a thousand times a year,” Flaherty said. “So everybody pretty much knows everybody in the division. That’s just how it is. There’s no weak link in this division.”

Flaherty (3-2) and his feel for the Cubs’ lineup was clear in how he described working around it, as if a safecracker.

Dating to last season, Rizzo has reached base against the Cardinals in nine consecutive plate appearances. Keeping others off around him limits trouble. Flaherty didn’t in the third. A tight strike zone put him behind on Descalso, and a walk to Descalso was followed by a walk to Kris Bryant. Rizzo tagged a fine pitch for a three-run homer, but Flaherty insisted he didn’t trace that back to a missed strike call to Descalso.

“It’s just a different at-bat with guys on,” Flaherty said. “I mean, if you’re going to dwell on it, you’re asking for bad things to happen. If I’m still thinking about that pitch as the rest of that at-bat goes, I’ve still got more chances to get him out. (The ump) missed one. Whatever. I still have a couple of more pitches to get him out. I wasn’t able to.”

The Cubs extended their lead to four runs in the seventh after skirting around Rizzo with a walk and watching Javier Baez drive in the run. Flaherty had left the game by then, turning a bases-loaded jam over to the bullpen. He needed a season-high 110 pitches to get 17 outs.

Hendricks got through his first 18 outs on 55 pitches.

“Some games are hard-fought. Both teams execute. A play happens here or there. That’s the game,” Shildt said. “One ball got out of the ballpark. One ball got into the gap. Otherwise we’d still be out there playing. But we’re not. And we’ll show up and play” Saturday.

Check back throughout the evening here for ongoing coverage from Sunday night at Wrigley.