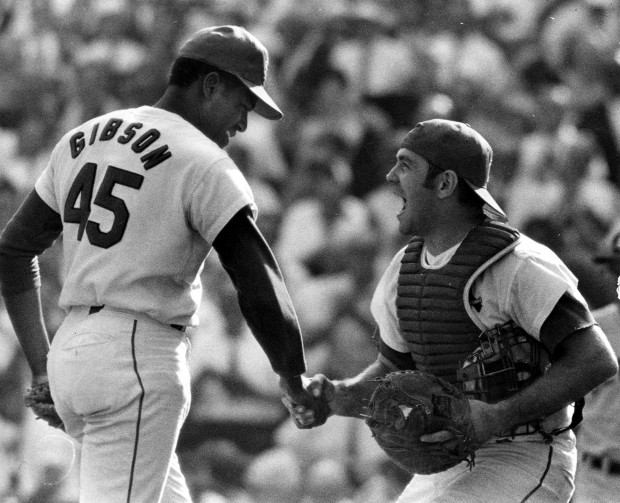 FILE OCTOBER 2, 1968- Catcher Tim McCarver gleefully clasps the pitching hand of Bob Gibson just seconds after Gibson had hurled the Cardinals to a 4-0 victory in the World Series opener. photo by Post-Dispatch staff 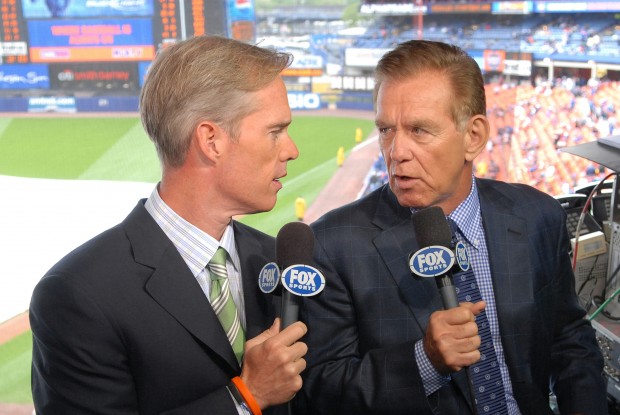 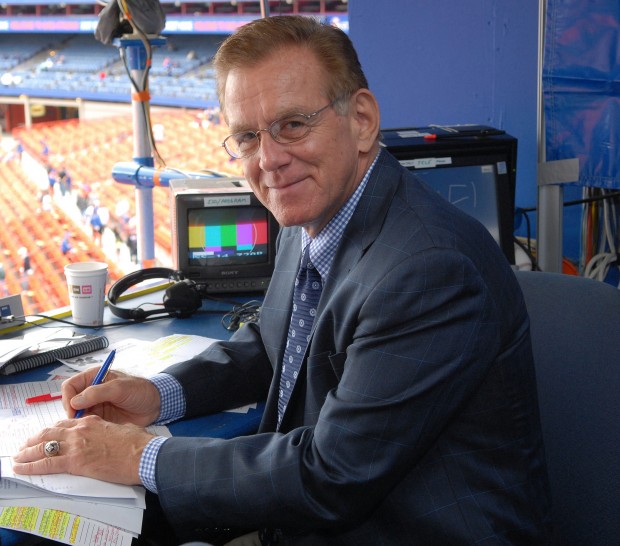 The first Buck-McCarver broadcast pairing was in 1990-91 when the late Jack Buck teamed with former Cardinals catcher Tim McCarver on CBS television.

Buck and McCarver didn't exactly mesh in the booth. But that didn't stop Buck from extolling the virtues of working with McCarver to his son, Joe, who began teaming with McCarver, a 2012 Hall of Fame honoree, on the Fox network in 1996.

"When we were paired together, my dad was thrilled," Joe Buck said. "I think he was thrilled because he knew that doing the World Series as a 27-year-old, I needed some credibility, some ballast, next to me. He knew I'd be covered.

"Whatever issues they had when they worked together for two years, he was relieved when I told him Tim was going to be my partner. ... I think we had a better partnership than they had.

"I don't know why. Tim and I just hit it off. We've been good for each other. He's taught me a lot and I've tried to keep him young. I can give him trouble and he laughs. It's a good combo."

McCarver, a hard-to-believe 70 years old now, has reached heights both on and off the field. He played in three World Series with the Cardinals, winning two, and hit a three-run, 10th inning home run off New York's Pete Mikkelsen at Yankee Stadium in Game 5 of the 1964 World Series.

McCarver has the best All-Star Game batting average for anybody with three at-bats or more at 1.000 (three for three). He is one of 29 players to have appeared in four decades, starting his big-league career in 1959 with the Cardinals, for whom he played 13 seasons in two stints, and ending it in 1980 with Philadelphia, where he also played twice.

Despite his longevity, at 1,501 hits, McCarver was a bit short of the Hall of Fame as a player, but he was to be feted Saturday night in Cooperstown, N.Y., where he was to receive the Ford C. Frick award for broadcasting and be enshrined in the broadcasters' and sports writers' wing of the Hall alongside Jack Buck.

McCarver said he would make mention of four men who shaped his baseball career in the Cardinals' organization:

• George Kissell, longtime minor-league fielder coordinator. "Not only instrumental in teaching me how to play the game, but how to think the game."

• Eddie Stanky, former manager and instructor. "One night, when I was in Atlanta and we were playing in Richmond, there was a ball hit to the left of the second baseman and they got the lead runner, which was me, as I was sliding into second base. The next afternoon, Eddie came up to me and said, 'You know that play when you slid into second last night? Try going in standing up. The second baseman has no play. He's going to hit you in the back.' I said, 'Eddie, what if he has a good arm?' Eddie, who used to be a second baseman, said, 'None of them do.' I thought of his concept, 'How innovative.' He got to me and opened my ears. He appealed to me in a quirky way. I did what he said a couple times and he was perfectly right."

• Joe Schultz, former coach. "Practical knowledge. He was my manager for three years in the minors and then coached for the Cardinals when I played for them. He was a wholesaler from the word 'go.' Everything was a 'freebie.' He would say, 'Sign the balls, fellas. Sign the balls.' Then, he would trade some of the balls to a guy in Philly for kielbasa.

"Once, I had got a new car, an Oldsmobile Toronado, but it had started squealing and I told Joe that I didn't know what was wrong. He said, 'You've got a fan belt problem.' He takes me over to his locker and he's got about eight different sizes of fan belts in there. No other coach in the major leagues had that, I guarantee you."

• George Crowe, former first baseman and instructor. "He changed me from an open stance to a closed stance. Had he not done that, realistically, I don't think I would have made it. I don't think I would have been able to hit big-league pitching. In 1961, he was released and, in those days, when guys were released, teams would hire guys for the rest of the year so that they would get paid. I was sent back to Charleston and George came there specifically to work with me. He stayed for a week and made more sense talking about hitting than anybody I'd ever talked to."

For help he received in his broadcasting career, McCarver said he would center on one man, NBC's Al Michaels, with whom he worked his first World Series between the Cardinals and Kansas City Royals in 1985 on ABC.

"Nobody helped me putting a game on the air or the business of television like Al," McCarver said. "In the second game of that World Series, Al said, 'Well, this begs the question. Is it tougher to broadcast a World Series or play in one?' I said, 'Are you kidding? Broadcasting one is so much more difficult. Not even close.'

"When you're a player, you can go out on the field and the way to get rid of something that's in your stomach is to do something about it. You can't do that as a broadcaster. Everything has to be controlled. You can be out of control as a player."

But little did McCarver know how much more difficult broadcasting was.

"In Game 6 of that Series, I was to be in the winners' locker room," McCarver said. "I went down to the Cardinals' clubhouse and I'm on the platform to cover the victory celebration when I see the (Don) Denkinger call at first base on the TV monitor. The Royals went on to win the game to force Game 7 and I then see a horde of people come out of the woodwork to disassemble what I was standing on — while I'm standing on it."

James Timothy McCarver was to be on stage again Saturday night. Presumably, with more solid underpinning.

Operations, rehab for shoulder problems could mean reliever has pitched for last time as a Cardinal.

When it comes to baseball on TV, it’s tough to beat St. Louis from a viewership perspective.

COOPERSTOWN, N.Y. — A look at the honorees to be inducted July 21-22 into the National Baseball Hall of Fame and Museum:

FILE OCTOBER 2, 1968- Catcher Tim McCarver gleefully clasps the pitching hand of Bob Gibson just seconds after Gibson had hurled the Cardinals to a 4-0 victory in the World Series opener. photo by Post-Dispatch staff