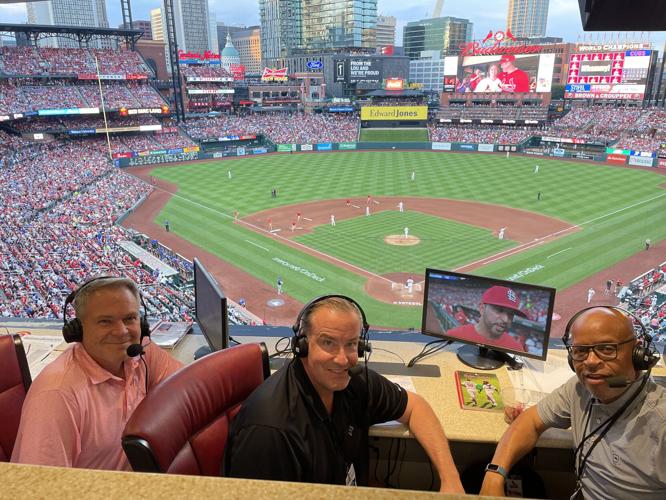 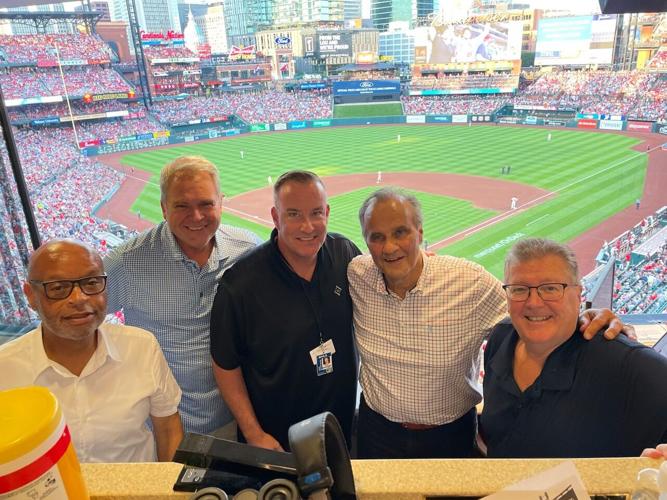 Former Cardinal, MLB manager and executive Joe Torre, second from right, is in the team's radio booth on Aug. 6, 2022 He is with broadcasters (from left) Mike Claiborne, Ricky Horton, Dan McLaughlin and John Rooney.

He just wrapped up his 24th season of doing play-by-play of Cardinals games for what now is known as Bally Sports Midwest, the last seven as the sole person in that role. Before all of that was a year in which he contributed to the pregame show.

The Cardinals have been in the postseason 15 times since he began, playing 138 games. McLaughlin has broadcast none of them — not an inning, not so much as a pitch. That’s because, unlike hockey, there are no local telecasts at any point in the playoffs. So while the Blues’ John Kelly has been able to call first-round games, McLaughlin has been shut out.

“It’s definitely frustrating but, I can’t do anything about it,” he said this week. “That’s the way it goes.”

Until now. On Friday he is set to become part of the Cardinals’ radio broadcast team, which he joined a few times during the regular season when BSM wasn’t showing games. He’s set to be part of that crew for the team’s entire postseason run.

“I’m thrilled,” McLaughlin said. “... I have had multiple opportunities to leave for national TV work, other organizations, do other sports but, I’ve turned those down. Why? Maybe, one day I’d get a chance to call a Cardinals playoff game. This is my dream come true to do playoff baseball.”

He’ll be joining John Rooney, who has been in the radio booth since 2006 and is wrapping up his first year as the lead announcer following Mike Shannon’s retirement after last season, and Ricky Horton. Plans call for Rooney to call the first three innings, McLaughlin the next two, Horton the sixth and seventh with Rooney back for the final two frames. They all will be contributing commentary while not in the play-by-play spot. Mike Claiborne, who also is in the booth and may appear occasionally in a support role, provides pregame and postgame reports.

Rooney has said that early in the season he was “kicking ... around” the idea of McLaughlin doing some games on radio after Cardinals president Bill DeWitt III mentioned the possibility to Dan Farrell, who oversees the team’s broadcast operations. He was thinking about how Blues radio play-by-play announcer Chris Kerber graciously allowed Kelly to call the second period of the 2019 Stanley Cup Final games, something he otherwise would not have done because there were no local telecasts at that stage of the NHL playoffs.

Rooney said he also discussed it with Horton and Claiborne and it was a unanimous feeling “in thinking it was a great idea.”

Now that McLaughlin has been in the booth a few times, Rooney is impressed.

“He brings a lot to the game,” he said. “It’s a different perspective, it boosts the broadcasts.”

A tip of the cap

McLaughlin is ecstatic — and grateful.

“This doesn’t happen without John Rooney,” McLaughlin said. “It needs to be pointed out that he never had to do this. Ever. This is a selfish business and he came to me with a selfless act. Total class. I’ll never forget it. He’s made the transition for me as seamless as it could possibly be. He’s been awesome. He keeps telling me, ‘just wait until we get into postseason.’ I can’t wait.

“I’m just thankful to the radio crew for giving me this opportunity. They’ve gone out of their way to invite me in, make me feel comfortable, and include me. I will never be able to thank them all enough.”

Doing radio is totally different than calling a game on television, in which the pictures tell the story and the announcer provides the soundtrack. Calls on radio need to be much more detailed.

“The difference is to try and make sure (I) do a radio call,” McLaughlin said. “I have to describe what I see. The situations, the score, the shift and everything else that goes with it. Most importantly? Have fun. If we have fun, the listeners will have fun. I have a blast with John, Rick, and ‘Claibs.’ They’ll keep you on your toes.”

McLaughlin had one of his best seasons this year, with many big calls and big moments in a storybook year punctuated by the team’s division title. Along the way there was Albert Pujols’ return to the team in his fairytale final season, also-retiring catcher Yadier Molina and Adam Wainwright becoming baseball’s most prolific batterymates. Plus there was Paul Goldschmidt’s probable National League MVP performance.

Cardinals announcers captured the events splendidly, though McLaughlin did not get to call Pujols’ milestone 700th career home run. BSM’s coverage was preempted that night by an Apple TV+ streaming of that game, and McLaughlin was in the radio booth when Pujols reached the landmark. He was calling that inning, but handed the microphone back to Rooney for that at-bat.

“That’s his call and he deserves it,” McLaughlin said before that contest.

Looking back this week on the wild season, McLaughlin thought about how much fun he has had.

“I try to bring a ton of energy to every game. Always,” he said. “However, this year, every game has fired me up. I love this game and I love the franchise. Every night, it seemed like, there was a different milestone. So, you better be ready to call it. A random game in the summer had something on the line. The players made this an amazing year.”

He also is appreciative.

“This is my 25th year on the Cardinals broadcasts, he added. “It’s been an incredible ride for me personally. The game has changed but, not my love for the game and this organization. To say, ‘I get to call Cardinals games,’ that’s more important to me than all the national work that’s been offered. It goes beyond the biggest deal I have been offered. I get to call games in my hometown, and do it for the DeWitts. They have been amazing to me, and for the greatest fan base in sports. That’s more important to me than anything else I would have the chance to do.”

Now he finally gets his chance to do postseason broadcasts.

Top of the mountain

McLaughlin was part of the top-rated local telecast crew in the country this season.

Bally Sports Midwest’s Cards productions were seen in an average of 7.3% of homes in the St. Louis market — their best rating since 2018, when the number also was 7.3. That’s per Nielsen, which tracks viewership. There was a tight battle for the No. 2 slot between Milwaukee, San Diego, Philadelphia and Houston, with the numbers still being tallied Thursday. But none will catch St. Louis.

It’s the second time in a row and fourth in five years the Redbirds have been No. 1, and they are in the top four for the 23rd consecutive season.

In terms of total viewers, BSM’s telecasts were seen by an average of 141,000 people in the market, the most since 2016. Counting areas outside of St. Louis, this year’s productions averaged 225,000 individuals.

Viewership was up 31% over last year, fueled by the team’s magical run in the standings and in individual player milestones late in the season. Telecasts before the All-Star break averaged 127,000 viewers. Following the break it was 155,000.

“This season was filled with magic, from Albert’s return to Yadi’s and Waino’s milestones to MVP-caliber play from ‘Goldy’ and Arenado,” BSM general manager and senior vice president Jack Donovan said in a statement. “It’s been a privilege to bring so many unforgettable moments to Cardinals fans. We salute our production and broadcast team for their tremendous work. And most of all, we thank Cardinal Nation for tuning in day after day.”

Notebook: How Game 1 is a 'what could have been' matchup for Cardinals and Phillies

Cardinals' local television ratings are best in the country

How to watch Cardinals vs. Phillies on TV, live stream, game times in 2022 MLB Playoffs

Broadcaster Dan McLaughlin, the television voice of the Cardinals, was charged on Monday with a felony count of "persistent" driving while intoxicated. It is at least his third DWI arrest.

Former Cardinal, MLB manager and executive Joe Torre, second from right, is in the team's radio booth on Aug. 6, 2022 He is with broadcasters (from left) Mike Claiborne, Ricky Horton, Dan McLaughlin and John Rooney.