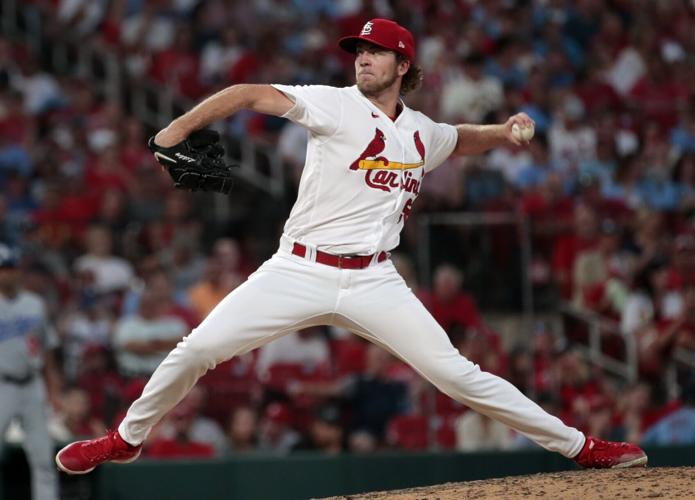 The Cardinals’ Matthew Liberatore pitches against the Dodgers on July 12, 2022, at Busch Stadium. 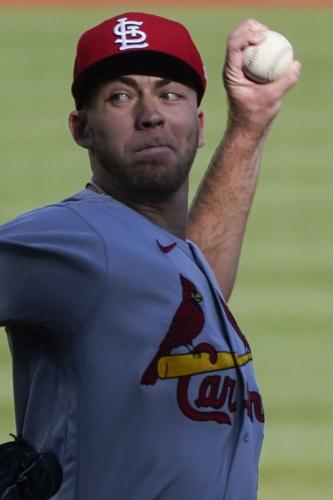 Cardinals starter Matthew Liberatore pitches against the Pirates during the first inning on Wednesday, Oct. 5, 2022, in Pittsburgh.

Moments after Matthew Liberatore walked back into the Memphis home dugout at AutoZone Park after a pregame throwing session for the Class AAA club, the 6-foot-4 left-hander could explain how his 2022 season went with just a few words.

Liberatore, 22, began the year there and made his MLB debut for the Cardinals in Pittsburgh on May 21, and earned his first win the following week in St. Louis against the Brewers

Then, from mid-May to mid-July, his miles started piling up as he split time between the majors and minors. He pitched in four games with Memphis and seven for the Cardinals before spending the majority of August and September in developmental ball, only to return to start game 162 for the Cardinals.

“A lot of learning, a lot of new experiences,” Liberatore added of his 2022 season.

Liberatore, who was five years younger than the average Class AAA player in the International League, rode the wave of success he strung together at the end 2021 into this year. In his first four starts of the season, he pitched to a 3.18 ERA and struck out 34 batters in his first 28⅓ innings with the Redbirds.

He ended April with back-to-back outings in which he threw seven scoreless innings — the first of which earned him recognition as the International League pitcher of the week. He posted a 31% strikeout rate and walked just six of the first 108 batters he faced.

It was a small sample of success for the former first-round draft pick that arrived to the Cardinals in a 2020 trade with the Rays.

But the rest of his season told a different story.

Liberatore posted a 5.17 ERA in 115 minor-league innings and had a 5.97 ERA in his first 34⅔ big-league innings. His strikeout rate shrank to 20% as the scenery around him changed and, while in the majors, the competition got better.

The experiences taught Liberatore to “go out there and compete,” and put an emphasis on finding a balance between the mental and physical aspects of baseball.

“I mean, everybody’s got a plan until they get hit,” Liberatore said. “I feel like you can prepare all you want. You can do your scouting reports and stuff — which are beneficial to have that information — but at the end of the day, you can go out and pitch (to) your scouting report and get hammered.

“And you can go out and pitch (to) the opposite of the scouting report and throw really well. Baseball is unique in that way. I think you have a plan going into it but you have to be able to go out there and adapt and adjust and read swings and kind of dance with the game a little bit.”

A dance that he doesn’t need to lead.

“It’s more so kind of dancing with the game a little bit and finding that flow where I don’t have to actively, consciously have a conversation with myself,” Liberatore said. “The game kind of produces that for me.”

When it comes to what Liberatore can produce on the pitches coming out of his hand, he feels improved in some areas. Liberatore described his changeup as a “continuous work in progress” and the trust he has in his fastball is “really coming along.”

While in the majors, the lefty’s curveball — his second most utilized pitch in his 24 MLB outings — generated his highest swing-and-miss rate (34%) of any of his five pitches that register on statcast’s data.

Results aside, the belief is that “the stuff is there,” Memphis manager Ben Johnson said in an interview last month.

“It’s just a matter of being consistent and repeating the pitches that he (Liberatore) needs to repeat,” Johnson said. “I mean, he’s got everything he needs. I think we lose sight of the fact that he’s such a young kid. He’s not a small kid. He’s a big man. But he’s still young in years. The stuff is there. We’re just polishing it up.”

From those like Johnson who have seen Liberatore up close for an extended time, he has been able to see howhe has handled what was thrown at him in 2022.

Following Liberatore’s return to the minors in early June, Johnson described the hurler as someone who returned and “handled business” rather than someone who hung his head. And as Liberatore finished with Memphis, Johnson saw much of the same.

“Things haven’t gone the way that he wants him to go,” said Johnson, who managed Liberatore for all of 2021. “He’s had some adversity and had to deal through it and pitch through it. But he keeps an even keel and he doesn’t get too high and he doesn’t get too low. And I think that’s something that’s a quality that a starting pitcher needs to have, especially someone like him.”

What the 2022 season ultimately gives Liberatore are lessons on his game that he’ll think about. But ones that he won’t overanalyze.

“I think you have to walk away from it and do a little bit of a reflection,” Liberatore said. “Kind of say, ‘I did this well. I didn’t do this well. This is what I need to improve on,’ so you have a goal and a plan going into the offseason. You’re not just aimlessly doing work that may or may not benefit you. I’m not going home and losing sleep about it during the offseason.”

Goold: 'Just get in' is not unique to Cardinals. But they should move on from it.

The Cardinals’ Matthew Liberatore pitches against the Dodgers on July 12, 2022, at Busch Stadium.

Cardinals starter Matthew Liberatore pitches against the Pirates during the first inning on Wednesday, Oct. 5, 2022, in Pittsburgh.