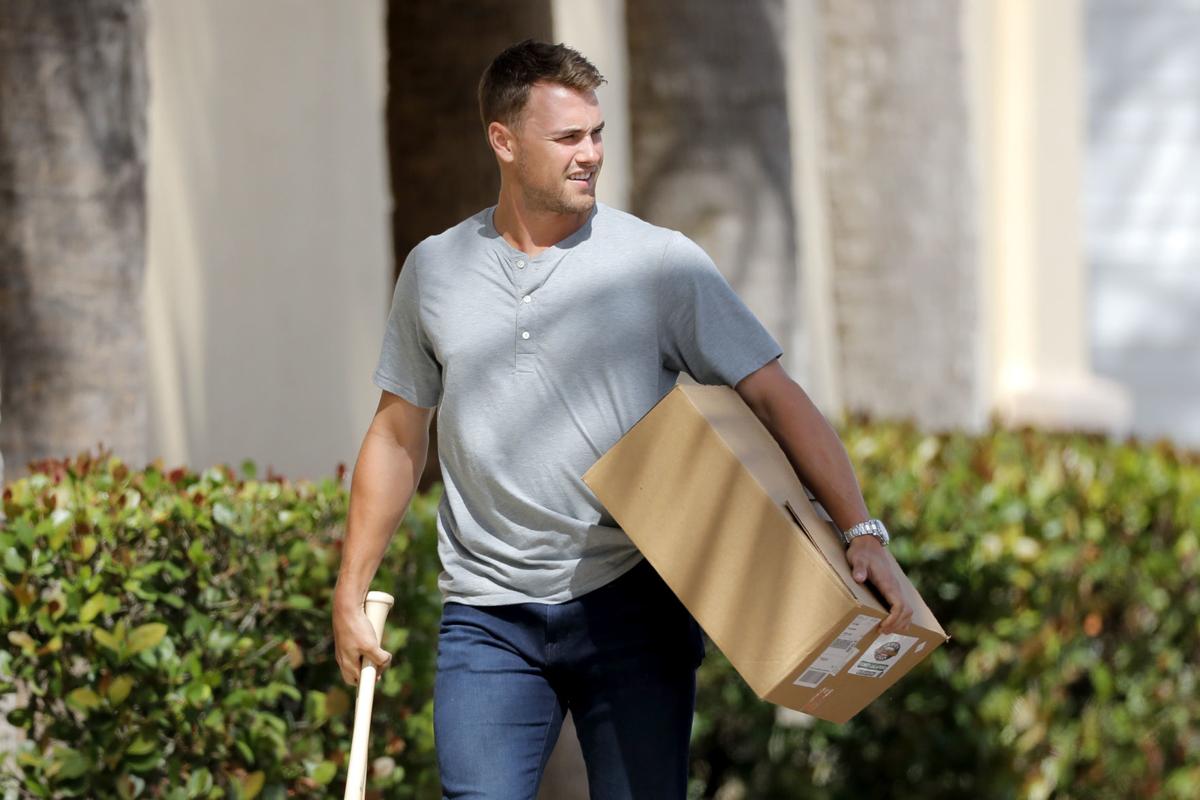 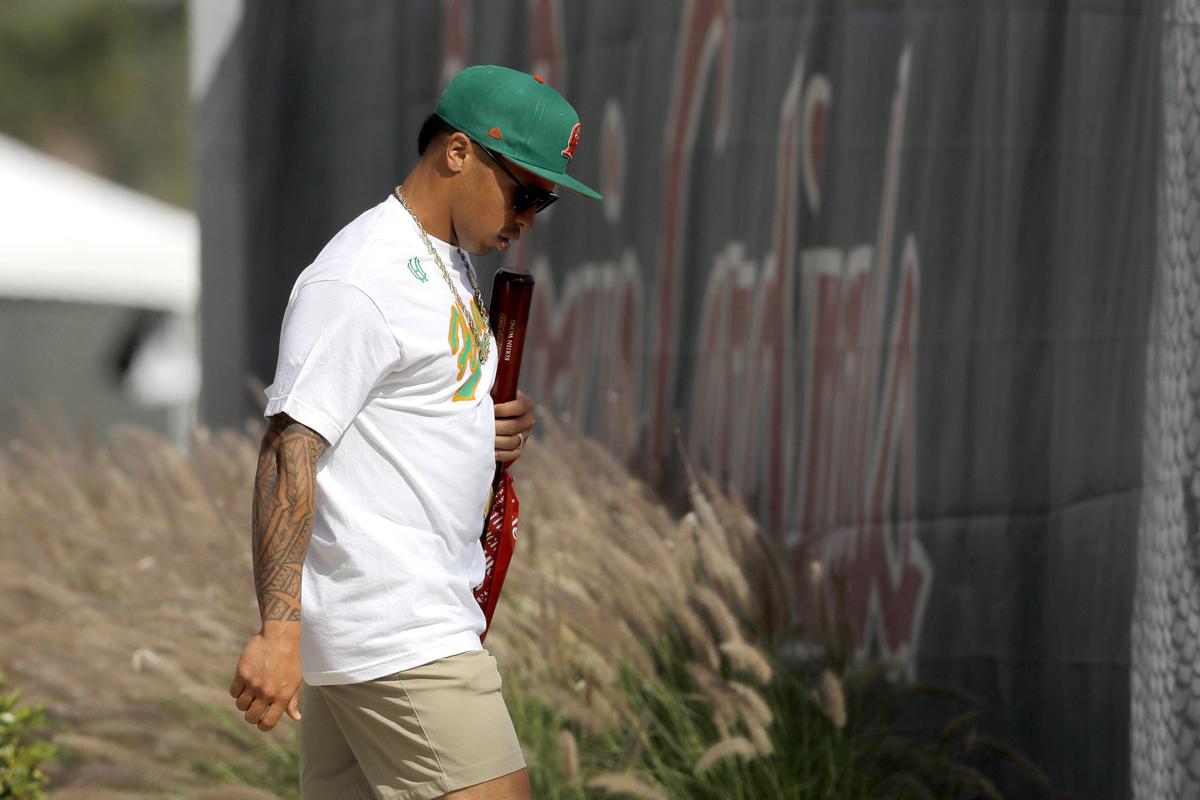 St. Louis Cardinals second baseman Kolten Wong leaves the team's spring training baseball clubhouse with a box and bats, Friday, March 13, 2020, in Jupiter, Fla. Major League Baseball has delayed the start of its season by at least two weeks because of the coronavirus outbreak as well as suspended the rest of its spring training game schedule. (AP Photo/Julio Cortez) 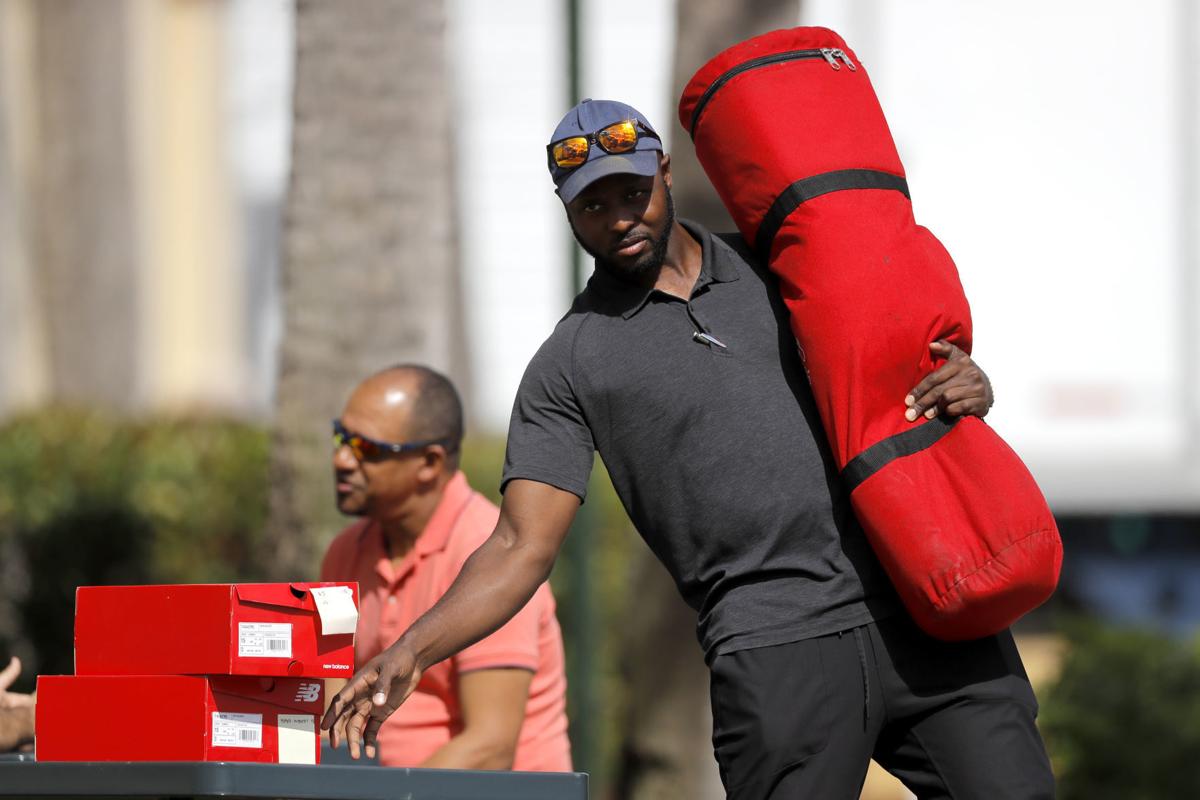 St. Louis Cardinals minor league outfielder Bradley Roper-Hubbert carries gear as he leaves the team's spring training baseball clubhouse, Friday, March 13, 2020, in Jupiter, Fla. Major League Baseball has delayed the start of its season by at least two weeks because of the coronavirus outbreak as well as suspended the rest of its spring training game schedule. (AP Photo/Julio Cortez)

JUPITER, Fla. — The last Cardinal to walk off the fields of Jupiter, Florida, on Monday before Major League Baseball nixed even informal team workouts and left players carrying their bags, gloves, bats and loads of uncertainty away from the clubhouse was closer Jordan Hicks.

He politely maintained a 6-foot distance as he explained he would do his best in the coming weeks to stay on a throwing program that, after elbow surgery, would put him on pace to return around the All-Star break.

The season won’t be that far ahead of him.

Commissioner Rob Manfred, as he left the Cardinals’ facility Monday, told the Post-Dispatch that opening day would be delayed indefinitely, and due to CDC recommendations it could be at least eight weeks before teams are cleared to gather in groups larger than 50. He held a 45-minute conference call with owners from chairman Bill DeWitt Jr.’s offices at Roger Dean Stadium, and while he was upstairs a dozen Cardinals players came by to pack their cars and plot where and what to do next.

“We’re not going to announce an alternate opening day at this point,” Manfred told two Post-Dispatch reporters in his first comments since restricting workouts and pushing opening day more than a month back. “We’re going to have to see how things develop. I think the commitment of the clubs is to play as many baseball games in 2020 as we can, consistent with the safety of our players and our fans. … We’re really encouraging players to make a decision where they want to be over an extended period of time and get to that location as soon as possible.”

As the coronavirus crisis has engulfed the globe, isolated countries and halted business and sports around the world, shifts in policies have come almost as fast as baseball continues to think its return will be slow. The Cardinals had planned to have between 15 and 25 players gather at the facility Monday for an informal workout. At the time manager Mike Shildt had set for players to stretch and begin returning to baseball activities, players were instead toting armfuls of baseball gear to their cars. The CDC announced that people should not gather in groups larger than 50, and the White House dialed that down to 10 — leaving bars and restaurants in many cities closed or shifting to takeout.

Veteran Adam Wainwright said there was “tons of uncertainty” as he drove away from the facility. Several players, when asked where or how they were going to work out shrugged, and one said, “That is an excellent question.”

“It’s going to be a while, I think,” Andrew Miller said.

“It’s kind of harsh really,” Cardinals chairman DeWitt said, after the conference call with other owners and Manfred. “It’s going to be a hard time until this thing settles out. But the best way to prevent it from being overly bad is to have isolation. That’s all you can do. We all knew that the potential — a possibility — was it would escalate pretty quickly.”

Manfred stressed that a goal is still to play a complete 162-game schedule, though when asked if there was a date that was no longer possible, he said he didn’t know. His office and the players’ union remain engaged in negotiations about more urgent matters before sketching out what various regular-season schedules and pay structures look like. In addition to spring stipends and pay for players on the 40-man roster and those remaining in major league camps, Manfred said the union and his office must agree if rosters are frozen during his stoppage of operations. Manfred planned talks about that Monday afternoon, adding his preference is to negotiate an agreement and not “announce changes unilaterally.”

In the coming days, Major League Baseball is going to provide all 30 teams with recommendations on how to compensate game-day staff, many of whom will feel the pinch of having no games at a time of a national urgency. DeWitt said there will be some plan to provide payment to the workers.

DeWitt added that once some of the issues for the major league players are settled on, the minor league players will have to be addressed for the compensation they’re not getting and the jeopardy their seasons could be in the longer this delay goes.

“Reach agreements that will give a lot of people clarity,” Manfred said. “There are a whole host of issues. Once you start thinking about what has to change, the number of issues gets larger, not smaller, I’m afraid.”

Before Manfred left the complex, a few Cardinals did take the field for some activities. Tyler Webb and Daniel Ponce de Leon played catch before parting ways to different locales in Florida. Miles Mikolas, a Jupiter native, and Brett Cecil played catch. The Cardinals had planned to hold weekday workouts for any players still in the area, and that could mean more people at the facility at one time than is advised. The virus, COVID-19, spreads ruthlessly in groups — and that is the driving reason to shut down sports and crowded events and locations.

The recommendations for social distancing over the weekend put a kibosh on the Cardinals' workout plans, but Manfred stressed — “clarified, emphasized,” he said — that the facility would not be locked. Access to it would have to be rationed. Through an agreement with the union, players who have offseason homes in the area would have “some place to use as a gym” when public gyms are closing.

Wainwright loaded up some gym equipment to take with him.

“Complete confusion, unknowing,” he said. “No one knows what to do. There’s no precedent. It’s not like, ‘Oh, yeah, back in 2008, I remember we did it just like this. And here’s what you’ve got to do.’ There’s none of that. Nobody has ever experienced anything like this.”

Several Cardinals, like Miller, who serves on an executive committee for the union, left the facility Monday wondering if mid-May would be a reasonable date of return. Teams expect a “very condensed” spring training that could be around two weeks, and that would put opening day in late May, even early June. But that could change depending on how well the virus is contained, or how feverishly it spreads.

Manfred declined to “speculate” on the leagues’ willingness to play in front of empty stadiums or get creative where the teams will play to start the season. Asked about the Cardinals’ scheduled series in London in mid-June, the commissioner said it’s too far away to know. Like everything in the past eight days — from canceling spring games to closing facilities to eliminating team gatherings at facilities — baseball is taking its cues from the government, the CDC and other experts. The length of the delay is not baseball’s to determine.

The recovery is baseball’s to help.

“Baseball is a great, great sport and a great thing for people to look to when there is hardship for any of us,” DeWitt said. “It is the American game. Always has been. I think when baseball comes back, playing it will be a big lift for the country.”

Former Cardinals Arozarena, Mayers sizzled this spring with new teams, while others made chilly first impressions

Ozuna, set to be Atlanta's cleanup hitter, struck out in 12 of 24 at-bats. Jose Martinez, the Rays' righthanded monster vs. lefties, was hitting .179.

Advocates for Minor Leaguers has longterm goal of doubling minor league salaries, but short-term need to help players during the coronavirus crisis.

St. Louis Cardinals second baseman Kolten Wong leaves the team's spring training baseball clubhouse with a box and bats, Friday, March 13, 2020, in Jupiter, Fla. Major League Baseball has delayed the start of its season by at least two weeks because of the coronavirus outbreak as well as suspended the rest of its spring training game schedule. (AP Photo/Julio Cortez)

St. Louis Cardinals minor league outfielder Bradley Roper-Hubbert carries gear as he leaves the team's spring training baseball clubhouse, Friday, March 13, 2020, in Jupiter, Fla. Major League Baseball has delayed the start of its season by at least two weeks because of the coronavirus outbreak as well as suspended the rest of its spring training game schedule. (AP Photo/Julio Cortez)