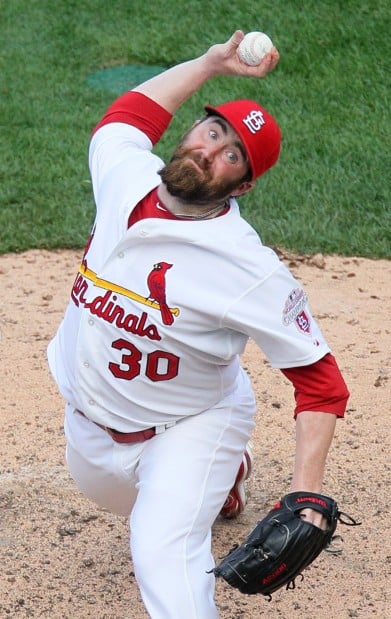 Cardinals closer Jason Motte pitches in the eighth inning during a game between the St. Louis Cardinals and the New York Mets on Monday, September 3, 2012, at Busch Stadium in St. Louis. Photo by Chris Lee, clee@post-dispatch.com 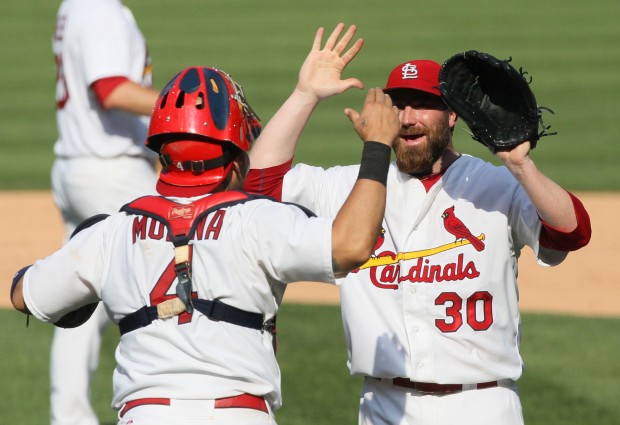 Cardinals closer Jason Motte celebrates with catcher Yadier Molina after securing the final out during a game between the St. Louis Cardinals and the New York Mets on Monday, September 3, 2012, at Busch Stadium in St. Louis. Photo by Chris Lee, clee@post-dispatch.com

Monday was an anniversary of sorts for Cardinals closer Jason Motte.

On Sept. 3, 2011, Motte recorded a five-out save to preserve a 6-4 win over Cincinnati as the Cardinals were in the formative stages of their desperate charge to a wild-card playoff berth and then well beyond. When Motte recorded a five-out save here Monday in a 5-4 win over the New York Mets, helped by an appeal call at first base in the ninth inning, it was his first five-out save in exactly a year. That's about the time Motte started becoming the Cardinals' closer, in deed, if not in name.

"After the last game of the World Series, I was," said Motte, smiling.

In precisely a calendar year, Motte has recorded 40 saves — seven more after Sept. 3 last year and 33 this year.

When he entered the game in the eighth inning Monday, Motte inherited a two-on, one-out spot with one of the league's most effective pinch hitters, Scott Hairston, pulled off the bench. Hairston has two pinch homers but this time he hit a looper to shortstop and then Kelly Shoppach struck out on a checked swing.

Motte said he really didn't pay attention to the dangers presented by Hairston or anyone else. "You start thinking about stuff like that ... that's when you get in trouble," said Motte.

Then catcher Yadier Molina's voice, almost always one of reason, was heard.

"Yadi said (at least he motioned), 'Come set. Step off. Throw to first.'

"I do what Yadi says," said Motte.

Motte remembered thinking, "OK, It's probably not going to work. Then the umpire (Dave Rackley) called him out and I said, 'Hmmm, that's a good way to get an out.'

"It's definitely not happened in my career. But it definitely changed that inning. Apparently he missed the bag. I haven't even gone back and watched it. The umpire said he was out, so he's out. If he says he's safe, he's safe. If they say it's a ball, it's a ball. I go with whatever they say."

Motte tries his best not to let anything detract from his job, which he said, simply, "is to get the hitter out."

And though it is a job, one of the most stressful on the field, it is fun.

"It's awesome," said Motte. "Whether it's a good day or a bad day, you still get to compete against the best in the league. So, for me, it is fun.

"Sometimes, you have bad results. That's not necessarily fun. But you still get to go out and play baseball."

Motte needed 31 pitches to get the final five outs. "It was more pitches than we would have liked him to throw," said manager Mike Matheny. "But when we smell a win, we've got to do whatever we can to put it away."

From a technical standpoint, Monday's save would qualify as one of the toughest but the 30-year-old former catcher doesn't differentiate.

Second baseman Skip Schumaker had said, "Getting a five-out save. That's not an easy task."

"If you start thinking, 'Three-run (lead). Three outs. That's an easy save.' You start thinking like that, the next thing you know, you're walking off the field with your team down."

Motte constantly reminds reporters and anybody else who will listen that the game isn't necessarily decided on his watch. His fellow bullpenners may have an even more dicey, or at least equally as taut, spot earlier in the game.

So it was with steady Edward Mujica, who got the final out of the seventh with the potential tying run at the plate.

Motte said he hadn't paid particular attention to Mujica when the latter played for San Diego and Miami, but he does now.

"His fastball is good. He's got a very good split-finger or changeup, whatever you want to call it. He's keeping guys off balance. That's the name of this game," said Motte.

Motte is familiar with September baseball, not to mention October baseball. And, yes, the chase is on.

"It's getting down to the wire and you can kind of see the end," said Motte. "You watch the numbers, watch other (teams) a little bit more. You aren't sitting there in April, saying, 'Oh, man, we're four games up on the Pirates.'''

Cards might be in position to use rookie or veteran if they need rotation help.

Carlos Beltran encouraged manager Mike Matheny to make an appeal to first base after he spied Andres Torres miss the base on his way to second.

New York's view of Torres' foot at first base

Said Mets' manager Terry Collins of call that turned game: 'I have never seen a call — not in the big leagues — like that.'

Jaime Garcia took a shutout into the eighth inning in the Cardinals' 5-1 win over the Mets at Busch Stadium. Catcher Yadier Molina picked up h…

Cardinals closer Jason Motte pitches in the eighth inning during a game between the St. Louis Cardinals and the New York Mets on Monday, September 3, 2012, at Busch Stadium in St. Louis. Photo by Chris Lee, clee@post-dispatch.com

Cardinals closer Jason Motte celebrates with catcher Yadier Molina after securing the final out during a game between the St. Louis Cardinals and the New York Mets on Monday, September 3, 2012, at Busch Stadium in St. Louis. Photo by Chris Lee, clee@post-dispatch.com