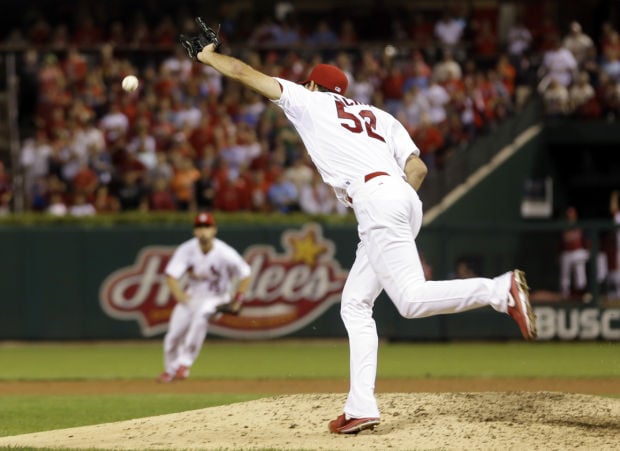 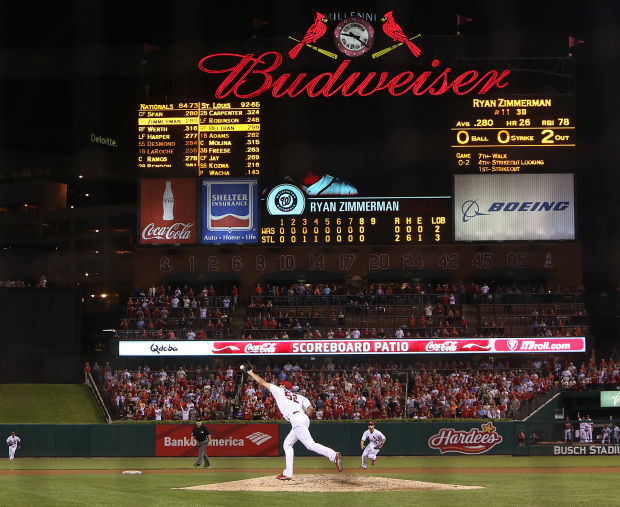 St. Louis Cardinals starting pitcher Michael Wacha is unable to reach an infield single off the bat of Washington Nationals' Ryan Zimmerman that broke up Wacha's no-hit bid with two outs in the ninth inning during a game between the St. Louis Cardinals and the Washington Nationals on Tuesday, Sept. 24, 2013, at Busch Stadium in St. Louis. Photo by Chris Lee, clee@post-dispatch.com

Nearly 30 years ago to the day, Sept. 26, 1983, Cardinals righthander Bob Forsch no-hit a Montreal Expos club that had been eliminated from the division race earlier in the day. That had been the last no-hitter thrown in St. Louis.

On Tuesday night, at a Busch Stadium once removed from Forsch’s venue, righthanded rookie Michael Wacha nearly duplicated Forsch’s feat against the Washington Nationals. They are the successors to the Expos, who had been eliminated from playoff contention the night before.

Wacha, the Cardinals’ top draft pick in 2012, no-hit the Nationals for 8 2/3 innings before Ryan Zimmerman beat out an infield single that tipped off the glove of the 6-foot-6 Wacha and went to shortstop Pete Kozma, who made a barehand grab and hurried a throw to first. The throw sailed slightly up the line, and a swipe tag by Matt Adams missed by inches as Zimmerman correctly was called safe by umpire Jeff Kellogg in front of a Cardinals bench where the players were ready to leap over the railing to congratulate Wacha.

The play was ruled a hit by scorer Mike Smith, and that decision drew no criticism.

VIDEO: WACHA ON HIS NEAR NO-HITTER

With Wacha having thrown 112 pitches in his ninth major-league start, manager Mike Matheny elected to pull him for fellow rookie Trevor Rosenthal, who got the final out for his second save. Adams smothered a hard grounder by Jayson Werth to ensure a 2-0 victory that cut the Cardinals’ magic number for clinching the National League Central Division title to three over the Pittsburgh Pirates, who stand alone in second place, two games behind the Cardinals.

“Man, that was some kind of fun to watch,” said Matheny. “That was something that not many people get to witness from a veteran, let alone a young pitcher.”

With two out in the eighth, left fielder Shane Robinson, playing with Matt Holliday shelved with back spasms, motored across the new turf in left field and into the corner to snag Anthony Rendon’s drive. That was the hardest chance until the ninth.

A paid crowd of 38,940 stood and roared as Wacha took the mound for the ninth. First up was pinch hitter Steve Lombardozzi, who grounded into the shortstop hole where strong-armed Kozma made a backhand grab and true throw to first.

Next was Denard Span, who had drawn the ire of the crowd when he tried to bunt for a hit in the sixth, with the ball rolling foul. Span was called out on strikes on a 3-2 changeup.

But the dream died when Zimmerman hit a tapper over the mound. If Wacha had been 6-foot-7 instead of 6-6, he might have made the play.

“Who knows?” said Wacha. “He put the perfect spin on it.”

Adams said, “I was doing everything I could to try to nick (Zimmerman). Then, smiling, he said, “I should have tried to trip him.”

The 22-year-old Wacha (4-1) fanned nine and allowed just two walks, both on full-count pitches, to Zimmerman in the seventh and Adam LaRoche in the eighth. But LaRoche’s walk was swallowed up when Wacha, after a visit from catcher Yadier Molina, induced Wilson Ramos to ground into a double play started by Kozma.

The only other baserunner to reach was LaRoche on an error by second baseman Matt Carpenter, who booted a grounder with two out in the fifth.

Wacha praised his catcher, as the Cardinals’ rookie pitchers, and veterans, customarily do.

“Yadi was able to keep them off-balance and I was able to hit the glove most of the night,” said Wacha. “It ended up being a pretty special night.

Retiring Nationals manager Davey Johnson, like Wacha a Texas A&M product, said, “I’ll tell you, that made Texas A&M proud. I thought he pitched a heck of a ballgame. And if he hadn’t gone after that ball off Zimm, it’s probably a no-no, because it would have been right to the shortstop otherwise.”

Johnson had seen Wacha pitch on television and said, “I was thinking command was an issue. It certainly wasn’t an issue today. He’s proven that he belongs here. They’ve got a good pitcher.”

Wacha did not act as if he felt bad about missing the no-hitter. And, given that he had pitched the Cardinals closer to the division title, he really didn’t need to.

He admitted his initial reaction was that he was “stunned” after the first hit. But he said, “You can’t hate on Pete or hate on me or anything. He made a heck of an effort on it. I guess tonight it wasn’t meant to be.

“The whole goal was just to get a win for the ballclub and stay in first place. It would have been nice to throw a no-hitter, but it’s all good.”

Zimmerman joked, “I was using my blazing speed trying to get there as fast as I can. Baseball is weird. We hit balls on the screws all night, and that’s the swing and that’s the hit that breaks it up.”

Zimmerman marveled at Wacha’s ability to use his changeup while still throwing that hard.

“To throw four, five changeups in a row when you throw 95, 97, that’s not something that I expected,” said Zimmerman, who said he wanted to go after a first-pitch fastball in the ninth so that Wacha could not go to his changeup.

As he awaited his at-bat, Zimmerman said, “It was like a big-time playoff atmosphere, which is what we like to play in.”

Wacha said he was aware he had no-hitter from the first inning on. Though he didn’t quite achieve it, he did receive an ice bath afterward from his teammates. “It was cold,” said Wacha. “But it was a good cold.”

Pitching coach Derek Lilliquist said he and Matheny had discussed all the circumstances involved in either letting Wacha stay in the game or pulling him. The decision was that if there was a hit in the last inning, Wacha would be pulled, no matter what type of hit.

For someone so talented, it seems hard to believe that Wacha never had thrown a no-hitter.

“I mean, they’re not that easy to throw,” he said.

Teammate Shelby Miller, who nearly joined Wacha at Texas A&M before signing with the Cardinals, had four no-hitters in high school in Texas, including three straight during one playoff season. Miller also had a one-hit shutout this season against Colorado, retiring the final 27 hitters in a row.

“Shelby was a little different pitcher than me in high school,” said Wacha. “He was the same size he was in high school (6-3, 215) that he is now.

Rosenthal said the game was not one he wanted to be pitching in.

“Not at all,” said Rosenthal. “I didn’t want to come in. I had a feeling he was going to finish it. He got so close there.

“I just wanted to be sure I got the shutout for him. It was an exciting night. A lot of people, I assume, are going to wake up tomorrow kicking themselves hoping we could have got that last one. But it’s definitely a good way to go.”

Carpenter scored the Cardinals’ first run off loser Gio Gonzalez (11-8) in the third when he hit his 55th double with two out and came home on Robinson’s single up the middle.

Molina’s double, with burly Adams on the move from first, accounted for the Cardinals’ second run in the fourth.

The Cardinals can’t clinch the division now until Friday. But Michael Wacha took them a giant step closer.

Derrick Goold of the Post-Dispatch contributed to this report.

Left fielder has missed three games and might sit out today, too.

Cardinals celebrate more than a win

The fans were on their feet as Michael Wacha came within one out of pitching a no-hitter in his rookie season with the St. Louis Cardinals. Se…

After rookie nearly no-hits the Nationals, columnist reflects on the Cardinals' glut of good young pitching.

In their final push for the NL Central, the Cardinals have followed the lead of their starting pitchers. So how does the postseason rotation set up?

Video: Wacha on his near no-hitter

Cardinals rookie Michael Wacha talks about the no-hitter that got away with two out in the ninth inning Tuesday.

In this uplifting Year of the Kids, of course a Cardinals rookie would throw a thrilling no-hit bid into the fun.

Got a question about the Cards, Rams, Blues or Mizzou? Bring it to our live chat with columnist Joe Strauss.

Standings: Cards trail by 7 at the break

Wacha gets one out away from no-hitter

See video highlights and recaps from the World Series.

Highlights: See how close Wacha was to history

The Cardinals wrapped up the regular season with a 4-0 victory over the Cubs.

St. Louis Cardinals starting pitcher Michael Wacha is unable to reach an infield single off the bat of Washington Nationals' Ryan Zimmerman that broke up Wacha's no-hit bid with two outs in the ninth inning during a game between the St. Louis Cardinals and the Washington Nationals on Tuesday, Sept. 24, 2013, at Busch Stadium in St. Louis. Photo by Chris Lee, clee@post-dispatch.com