Oct. 9, 1944 • Plenty of empty seats as the Cardinals beat the Browns in the all-St. Louis series
0 comments
Share this
{{featured_button_text}}
By Tim O'Neil St. Louis Post-Dispatch

ST. LOUIS • It was a blustery 47 degrees at 8 a.m., when barely 250 hardy fans gathered outside the gate for $1.25 bleacher tickets. The preferred drink was coffee.

Inside Sportsman's Park, an usher mistakenly tried to eject a few fellow employees relaxing on break. One barked back, "In this weather, we should be beside a stove in some saloon."

The final game of the 1944 World Series — the only Series played entirely in St. Louis — was contested on a chilly Oct. 9 before only 31,630 fans, almost 3,000 fewer than a full house. For first pitch at 2 p.m., the temperature was 54. Fans swigged from flasks, not beer bottles.

Greatest sports events ever held in St. Louis? Here's our top 20 (plus one!)

PGA at Bellerive was such a smash hit, some wondered if it was the best sporting event ever held in St. Louis. Better than the 2011 World Seri…

That morning, local businesses had given away hundreds of Game 6 tickets to servicemen, crippling the scalpers' market. Reserved seats at $6.25 face value went for $1 on Dodier Street, down from $15 only days before.

The St. Louis Browns clinched their only American League pennant by defeating the New York Yankees before 37,815 at Sportsman's on Oct. 1. The Cardinals coasted to an eighth National League pennant. When their train pulled into Union Station from New York that night, a brakeman shouted, "Watch out for those Brownies, boys."

On the night before Game 1, hundreds camped outside the ballpark on North Grand Boulevard, near St. Louis Avenue. A pre-game rainstorm dampened only clothing. Said Bill Schneider, a 16-year-old Soldan High School student, "A loyal baseball fan would sit through a snowstorm."

Mary Ott, a vociferous Cardinals fan, had the prescient prediction: "The Cards, four out of six."

The Browns won the opener, 2-1. Cardinals' and Browns' fans sat side by side throughout the Series. Sportswriters judged that cheering favored the Browns and ascribed it to underdog sentiment. The Series was tied at two when the Cardinals won Game 5 2-0 on Oct. 8 before a standing-room crowd of 36,588.

Then came chill. After the Cardinals' 3-1 clincher in Game 6, fans went home on streetcars. (But none of the city's three dailies used the phrase "Streetcar Series.") Because of wartime gasoline rationing, no victory parade was organized.

With World War II slogging along, baseball barely made the local front pages. The headlines Oct. 10 told of American forces entering Germany and mopping up on Peleliu. The Globe-Democrat ran a brief Page 1 story by Robert L. Burnes, who would toil for the Globe for another four decades. 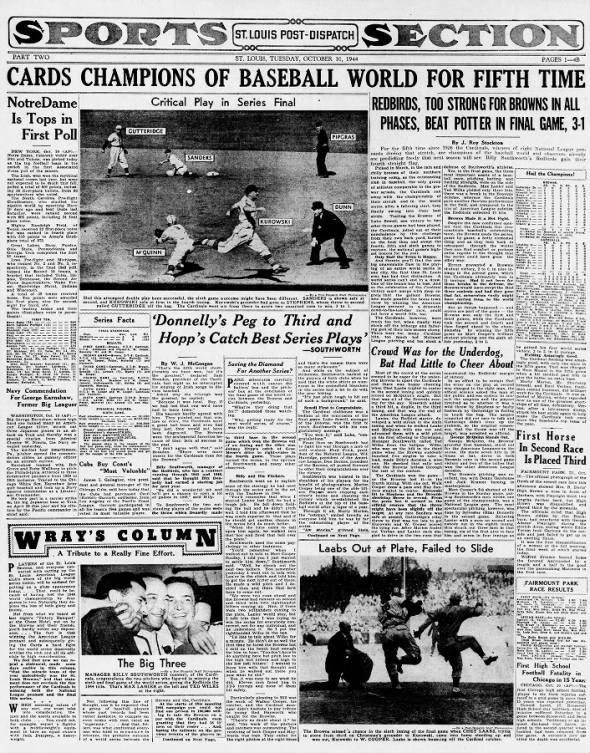 In 1953, Anheuser-Busch bought the Cardinals and Sportsman's Park, and renamed the latter Busch Stadium. The Browns moved to Baltimore, becoming the Orioles.

Scenes from the Browns and Cardinals 1944 World Series

Three weeks after a record 17-game winning streak, Shildt "floored" by dismissal from pro organization who groomed and inspired him.

Shildt is the first St. Louis manager to be fired immediately after taking his team to the postseason.

Cardinals players praise 'steadiness' of Shildt's coaching staff, so will all of them be back for encore?

Shildt, who will receive NL Manager of the Year votes, has led Cardinals to postseason in all three full seasons. Negotiations on an extension are forthcoming.

Lessons learned? 2021 Cardinals revamp pitching, rely on defense and streak their way to history, but fall shy of being historic

A season that drifted toward forgettable due to injuries and offense awoke with September's 17-game winning streak, yet left Cardinals 10 years without a title.

'The hurt is what motivates you': His career spent overcoming adversity, Cardinals Reyes tested again by walk-off loss

Reliever (and possibly a future starter) threw only four pitches in Wednesday's wild-card game, but the last one cleared the wall for a walk-off loss.

Tipsheet: Boo all you want, but the Astros are great

The Astros are just a really, really good team. This is not about stealing signs, it's about hitting really well.

None of the 10 teams in the Central divisions have advanced to the World Series since 2016.