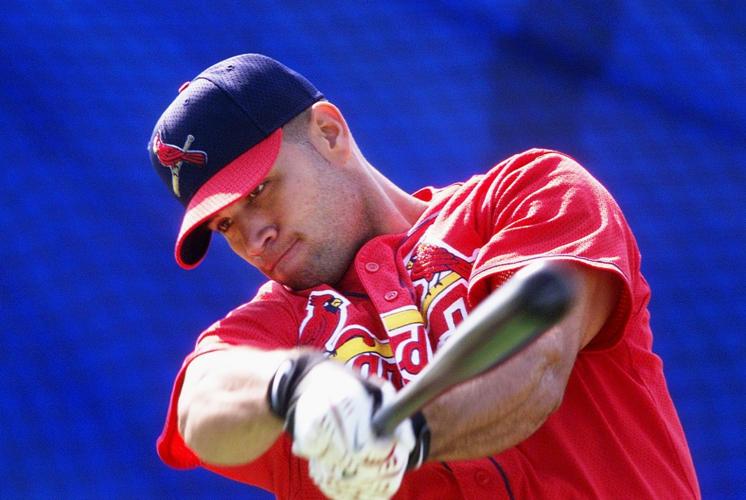 Cardinals infielder Albert Pujols swings in the batting cages during spring training at Roger Dean Stadium in Jupiter, Fla., in 2001. 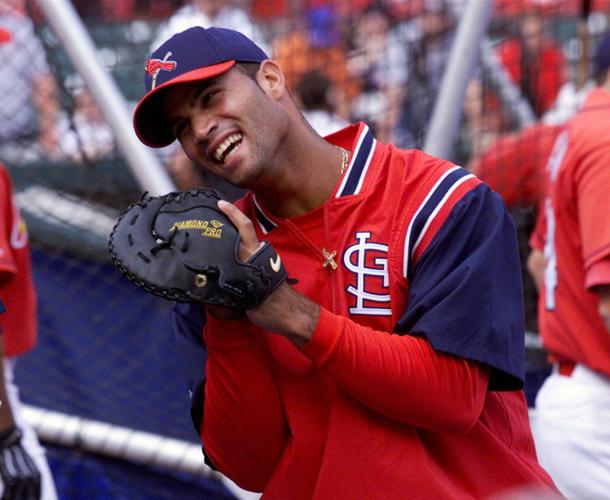 Albert Pujols jokes with teammates during warmups before a game against the  Mets at Busch Stadium on April 27, 2001. 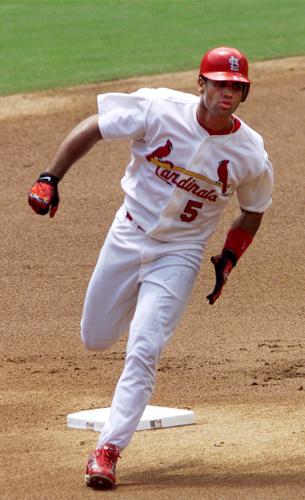 Albert Pujols rounds second on his solo home run against Houston at Busch Stadium on July 25, 2001.

The first meeting between Ben Johnson and Albert Pujols is one that couldn’t be pinpointed by Johnson. Rather, something else comes to mind when Johnson thinks back on his first encounter with Pujols during their time as minor-leaguers following the 1999 MLB draft.

“Now I remember the first time I watched him hit,” said Johnson, a former fourth-round pick by the Cardinals who now manages the franchise’s Class AAA affiliate. “And it was crystal clear that he was a lot bigger and stronger than everybody else, and he could really handle the bat.”

Aaron Penberthy — a former catcher and the Cardinals’ 25th-round pick in that year’s draft — shares a similar Pujols story when he reflects on his playing career.

“You knew when he hit. You know what I’m saying? There’s a different sound,” said Penberthy, who teaches physical education at the junior high level and coaches baseball at Hoover high school in Fresno, California. “And Ben (Johnson) and these other (1999 draft class) guys will tell you, there’s a different sound that comes off the bat from these major leaguers. … Even though we’re all pros, it’s a different sound. They’re on a different level. And it’s like, ‘Who’s hitting over there? Good grief.’”

And even though Pujols raced to the major leagues after one full season in the minors, the qualities he exemplified at baseball’s highest level were instantly noticed by the players he was drafted with.

That is true for Bo Hart, a 33rd-round pick who reached the major leagues with the Cardinals in 2003. Hart met Pujols for the first time during an instructional game at Roger Dean Stadium in Jupiter, Florida. It didn’t take long for Pujols to make his presence felt.

“I think he said, ‘Hi, I’m Albert’ and that was the first time I met him,” Hart said. “And then his first at-bat, he hit a home run during the game. First at-bat of instructional league he hit one to left-center. I remember it very well. And that was like, ‘Wow. Ok. That’s impressive.’ And then the impressive label just stuck with him all the time for me.”

If it wasn’t the first home run that Pujols launched out of a minor–league ballpark that his fellow draftees witnessed, the ones that followed served as a window into the caliber of hitter Pujols would become.

“I don’t know if I specifically remember his first home run by any means, but I watched a lot of home runs,” said B.R. Cook, a right-handed pitcher taken in the third round. “One thing I noticed about him is that he never really looked like he was trying to hit a home run. He looked like he was just trying to put the ball in play and hit the ball hard.”

Some of the impressions that Pujols had on his former minor-league teammates and fellow draftees included advice that still comes up on a regular basis.

Hart coaches baseball at Memphis University School, a high school in Memphis, Tennessee. The hitting lessons he gives are typically filled with wisdom Pujols passed along when their careers intertwined.

“It’s like I’ve almost stolen his quotes,” said Hart, who has coached for 14 years. “It’s just sort of like he was profound in how he was trying to teach his teammates about hitting and about pitchers and tendencies and advanced scouting at that point.”

For others like ninth-round pick Damon Thames, the brief overlapping time in the minor leagues with Pujols left an impression of who the Dominican-born slugger was off the field. Thames, 46, a former shortstop, got to know Pujols when the latter was still a third baseman. The two worked out together while they were both in Class Low-A and High-A. They had Bible study with Johnson and former fifth-rounder Charles Williams. After Thames’ playing career ended in 2001, he kept in contact with Pujols for a while.

“Staying in touch wasn’t even about just trying to connect with a future Hall of Famer,” said Thames, who lives in his native Texas where he works in real estate. “But he’s just a good person that you wanted to encourage and be encouraged by along the way.”

This all came after Thames had no clue who Pujols was when their minor-league careers began.

“Typically you’re following the draft and whatnot. You’re like, ‘Hey when is (first-round pick) Nick Stocks going to sign?’ You know he signs and everybody knows he’s going to show up,” Thames said. “But when a 13th rounder out of a Kansas junior college signs, nobody knows. … He just showed up out of nowhere, unannounced, and, from day one, he hit from the first pitch he saw and didn’t stop until his last at-bat.”

When Pujols got to the majors after one year in the minor leagues, some fellow 1999 draftees still heard from the star first baseman. That contact came with a bit of philanthropy that Pujols is more known for off the field.

“You feel a closeness to him, you know what I mean? We played ball together and he moved a lot quicker than I did,” Johnson said. “But Albert always kind of kept in touch with me. We ended up crossing paths again and he gave me a bunch of bats and gave me some gloves when I was in the minors still.

“Then we crossed paths again in the big leagues and, you know, (I was) just always really proud of Albert. Albert’s always been a good teammate and a good friend. I’m just really happy and really pleased to see the career that he’s had and that he didn’t let it go to waste.”

Former fourth-round pick Jimmy Journell, who pitched for the Cardinals in 2003 and 2005, crossed paths with Pujols and didn’t realize it until later. After Journell missed his first season of professional baseball because of Tommy John surgery he had during the draft, he was booked for a baseball signing session by his agent during spring training in Florida before the 2001 season.

At the hotel where he signed baseballs, Pujols sat next to Journell. The only thing was that Journell wasn’t too familiar with who Pujols was because of his absence the year prior.

“If I had to do it over again, I would have had him sign about a couple dozen baseballs for me that day,” Journell said, laughing. “I didn’t know who he was or what kind of career he was going to end up having. It was funny that I was sitting in there with him and signing baseballs — just me and him — and didn’t know much about him.”

They became teammates briefly once Journell reached the majors. Following his playing career, Journell, like many other 1999 draftees, still rooted for his former teammate.

“I was always intrigued because I wanted him to do as best as he could because then I can tell my kids, grandkids, whoever, ‘Hey, I played with that guy. He’s probably one of the top five players of all time,’” Journell said. “I was rooting for him. He was always a good dude to me. I was always hoping he’d finish the way he actually did.”

The Best Podcast in the Minors, the weekly show produced for StlPinchHits.com, invited Post-Dispatch baseball writer Derrick Goold to talk about the minors, review the season, and discuss development within the Cardinals system. In other words: Crossover podcast!

Cardinals infielder Albert Pujols swings in the batting cages during spring training at Roger Dean Stadium in Jupiter, Fla., in 2001.

Albert Pujols jokes with teammates during warmups before a game against the  Mets at Busch Stadium on April 27, 2001.

Albert Pujols rounds second on his solo home run against Houston at Busch Stadium on July 25, 2001.