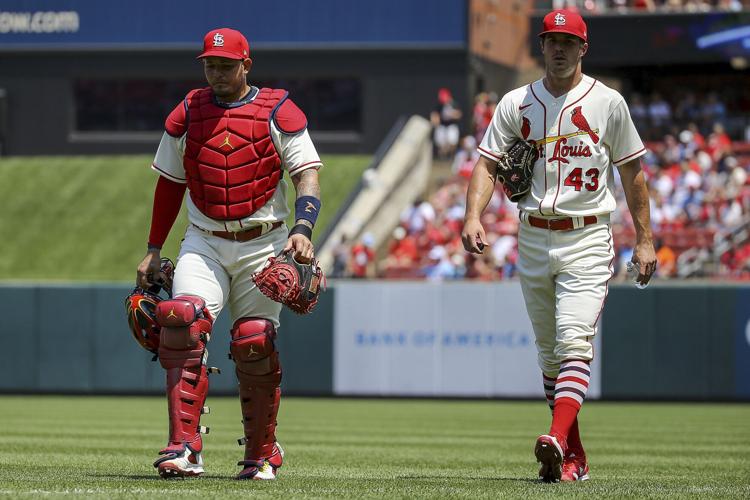 St. Louis Cardinals catcher Yadier Molina (4) and starting pitcher Dakota Hudson (43) walk toward the dugout prior to the start of a baseball game against the San Francisco Giants Saturday, May 14, 2022, in St. Louis. (AP Photo/Scott Kane) 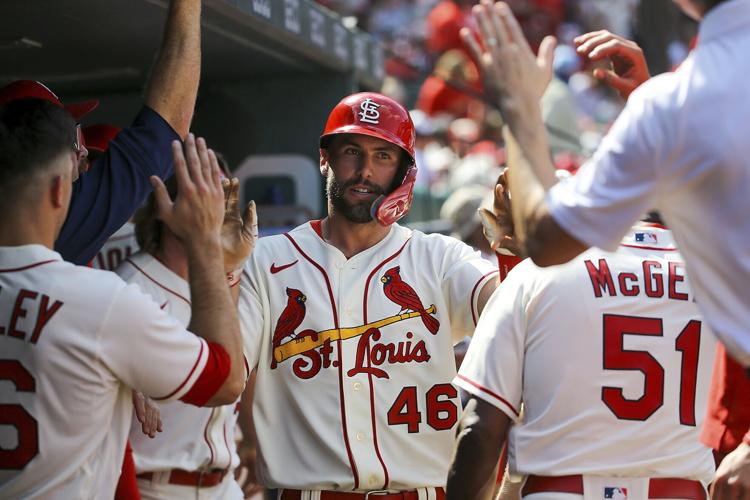 St. Louis Cardinals' St. Louis Cardinals first baseman Paul Goldschmidt (46) is congratulated by teammates after after scoring a run during the seventh inning of a baseball game against the San Francisco Giants Saturday, May 14, 2022, in St. Louis. (AP Photo/Scott Kane)

Working consistently without a net and a lingering inability to string any steady offense together demands precision from the Cardinals’ strengths in order to win.

With a game tottering, a victory in the balance Saturday, the Cardinals leaned on the reliever who has been as close to flawless as they come.

Ryan Helsley took the ball with the bases loaded, one out, and a slim two-run lead to protect in the seventh inning. A wild pitch and that lead cleaves in half. A base hit and it’s vaporized. The runs provided by rookie Brendan Donovan’s double and Tommy Edman’s solo home run offered the narrowest margin for error. Perfect spot for Helsley. The right-hander got a double play from the first batter he faced and escorted the Cardinals down the tightrope toward what became a 4-0 victory against San Francisco at Busch Stadium.

Helsley’s cool in the seventh climaxed a game shaped by Yadier Molina’s instincts, Dakota Hudson’s persistence, and the golden sheen of Edman’s glove.

All of the things the Cardinals count on when the offense doesn’t add up.

“If we’re going to go through this stretch where we’ve talked about our offense quite a bit, you’re going to have to win ballgames the way we just did,” manager Oliver Marmol said. “We pitch well. We play good defense. We make good decisions. And score three, four runs. There will be a stretch where we hit. You still have to win games when you’re not feeling great. That’s what we did.”

Each time the Giants threatened to answer or overtake the Cardinals and extend a six-game winning streak, the defense or pitching or both rushed to the rescue. Before Helsley, it was Molina.

The last pitch starter Dakota Hudson threw in his five scoreless innings was one of the few four-seam fastballs he’s thrown and possibly the only time he’s ever thrown to a standing up catcher. Undone by walks in his start at San Francisco, Hudson spent the past week “getting that ramshackle of a delivery a little bit fixed up.” The result was a steady drumbeat of ground balls for infielders like Edman to spin into outs.

The Giants did not get a runner safely to third against Hudson until the fifth. With two outs, the Giants had the tying run at third, the go-ahead run at first, and Molina sensed Joc Pederson was eager to go from first. The Cardinals’ veteran catcher’s spider sense kicked in and he spied the sign from the Giants’ dugout. With two strikes on Mike Yastrzemski, Molina alerted teammates to the likely delayed double steal.

“I’ve got a pretty good idea that they like to do that,” Molina said.

He stood up to receive Hudson’s pitch.

“I’m not sure I’ve ever had a catcher stand up just because — sinker guy,” Hudson said. “So that’s like where the damage is done mostly. There was no ease-up on that pitch. It was just get it through and get it up.”

Molina got it and then it was gone — his throw beating Pederson to second base by so many strides that the Giants’ outfielder turned back toward first. His teammate, Joey Bart, never broke from third. Shortstop Edmundo Sosa ran Pederson down for the final out of the inning. As soon as manager Gabe Kapler gave the sign, Molina sleuthed the steal and short-circuited it.

“He just sees the field way better than everybody else,” Marmol said. “That play is a perfect example of an elite player.”

Edman’s solo homer and fourth homer of the season came in the bottom of that inning to double the Cardinals’ lead, 2-0. Hudson (3-2) didn’t deliver a pitch — or a pitch out — with a lead greater than one run. When the game reached the seventh, the Cardinals turned first to rookie Andre Pallante and had Helsley waiting, warming, looming. The call was whether to go to Helsley with two on and leadoff hitter LaMonte Wade Jr. up or stick with groundball-getter Pallante.

Wade stung Pallante for a single that loaded the bases and made the call for the Cardinals. A fragile lead needed their most dominant defender.

“I’ve kind of figured out if I’m going into the game, it’s probably one or two runs we’re ahead or it’s tied,” said Helsley, who struck out 20 of the first 31 batters he faced and has yet to give up a run. “You try not to think about these things, just attack guys with your best stuff and get ahead of them. … I try to go at guys and get them on their heels.”

With the bases loaded and two outs to get, Helsley fell behind 2-0 with consecutive 99-mph fastballs to Brandon Belt. Belt fouled off a 100-mph fastball and ignored a 101-mph fastball to get into a favorable 3-1 lead. The Cardinals stuck with Pallante to get the grounder, went to Helsley to get the elevated fastball strikeout, and so fittingly Helsley got the grounder.

Belt skipped a 98-mph fastball into the rally-erasing double play.

Helsley has stranded all eight of his inherited runners this season and he’s allowed only two baserunners — one walk, one hit — in 11 2/3 innings. Helsley has collected 35 outs from 36 batters faced this season.

“The biggest thing about it is he’s comfortable,” Marmol said. “That goes a long way. It helps to throw triple digits and be able to locate. You’ve got a confident guy right now who is convicted behind every pitch. This is a really good version of him.”

The Cardinals paired doubles from Paul Goldschmidt and Nolan Arenado in the seventh inning to double their lead again, setting the final score. Until that point, it took the best version of their defense and pitching to keep from capsizing due to the lack of runs. Eight of their previous 12 home games had featured three or fewer runs. How light their production had become flickered on Busch’s scoreboard. That’s the line the Cardinals had to walk Saturday for a win — hopscotching through zeroes and assuring the Giants just had more than them.

Scoring would certainly alleviate some pressure.

If not, they’ll try to redirect it.

“We do a great job of preventing runs from the pitching standpoint and from the defensive standpoint,” Edman said. “If we’re able to score a few that puts that much pressure on their team.”

cards score, up next info

Growing into his larger role, Hicks takes on Giants for a second time

Bracketed around a visit from the Orioles, the Cardinals and San Francisco are playing something similar to a seven-game playoff series, complete with repeat starters.

Two strikes? Runners in scoring position? Cardinals rookie Yepez has a stance for that

After a phrase from Oquendo caught in his ear, Yepez adopted a different stance at the plate for two-strike pitches. Also: Wainwright gets clearance to join team.

The Man wasn't supposed to play, but his pinch-hit double against the Cubs made history — and then gave kids throughout St. Louis reason to celebrate.

Hicks pitches a career-high five innings and 77 pitches to continue building toward a role in the rotation, but lineup continues recent fade.

Wainwright was cleared from the COVID-19 IL in time to throw a bullpen Thursday, make case to start Sunday, and attend Blues' game Thursday night.

Molina was a giant against the Giants on Saturday

The Mets preemptively called the game shortly after Jack Flaherty finished a flat-ground throw out in left field at Citi Field.

A whiff of trouble: Cardinals strike out an unlucky 13 times and fall, 3-1, to Mets in Game 1

O'Neill returns to the lineup after two days to find his timing. Cardinals bring back lefty Naughton to be the 27th man for the doubleheader.

St. Louis Cardinals catcher Yadier Molina (4) and starting pitcher Dakota Hudson (43) walk toward the dugout prior to the start of a baseball game against the San Francisco Giants Saturday, May 14, 2022, in St. Louis. (AP Photo/Scott Kane)

St. Louis Cardinals' St. Louis Cardinals first baseman Paul Goldschmidt (46) is congratulated by teammates after after scoring a run during the seventh inning of a baseball game against the San Francisco Giants Saturday, May 14, 2022, in St. Louis. (AP Photo/Scott Kane)