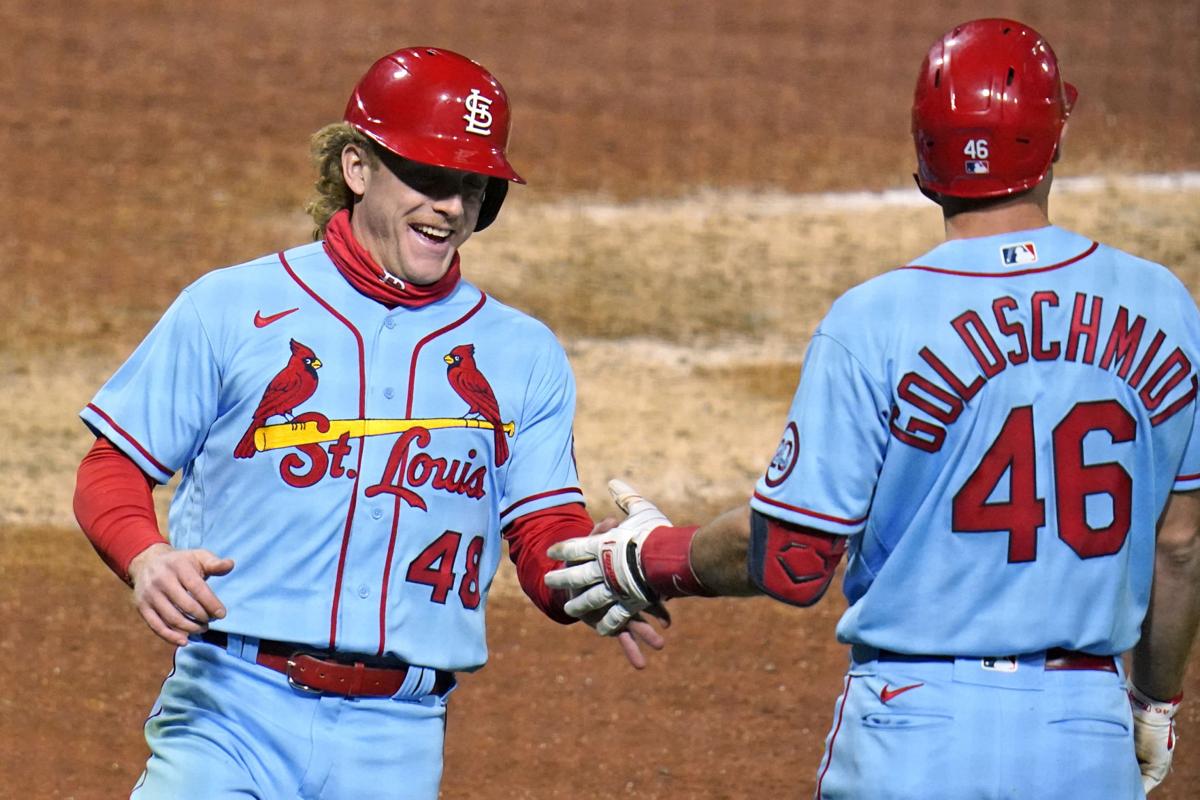 CORRECTS TO SINGLE, INSTEAD OF DOUBLE - St. Louis Cardinals' Harrison Bader celebrates with Paul Goldschmidt after scoring on a single by Tommy Edman during the seventh inning of the team's baseball game against the Pittsburgh Pirates in Pittsburgh, Saturday, Sept. 19, 2020. (AP Photo/Gene J. Puskar)

St. Louis Cardinals starting pitcher Kwang Hyun Kim collects himself on the mound after giving up a solo home run to Pittsburgh Pirates' Jose Osuna during the the third inning of a baseball game in Pittsburgh, Saturday, Sept. 19, 2020. (AP Photo/Gene J. Puskar)

PITTSBURGH — In a race against a pitch count, Pittsburgh starter Mitch Keller sent a no-hitter into the seventh inning against the Cardinals but did not continue. So as the zeroes he lined up gave way to the walks that would undo them, manager Cards Mike Shildt saw more than a rally.

He called it an allegory.

Two walks and a hit batter that could prove costly by Sunday primed a five-run seventh inning that carried the Cardinals to a 5-4 victory Saturday night at PNC Park. The superb start Keller authored on 84 pitches — exhausting the supply he had been given coming back from an oblique injury — took the Cardinals eight batters to waterlog and claim their third consecutive win. They hadn’t put a ball out of the infield in 11 batters before Tyler O’Neill’s two-run double started the scoring.

They’ll face their next adverse scenario in the hours leading up to Sunday’s season series finale against the Pirates. The hit batter that loaded the bases and greased the rally was catcher Yadier Molina, and he was struck on the same hand that had been beaten, bruised, and batted all week. Molina tried to squeeze his hands against his chest as the pitch came inside, but the ball collided with his left wrist, near the same area Ryan Braun’s bat hit him earlier in the week. Twice on the trip, Molina’s glove hand has been hit by a bat, and Braun’s swing caught him “flush” on the left wrist, a teammate said.

The ball got him in close to the same area, Shildt said. X-Rays taken at the ballpark did not show any fractures, the manager confirmed. For the second time in five days, Molina will go for another series of exams on his left wrist to determine if there is any damage. He was diagnosed at the park with a bruise, which he already had from Tuesday’s trauma.

O’Neill’s two-run double halved the Pirates’ lead, and singles by Kolten Wong and Tommy Edman tied the game and put them ahead, respectively. The Cardinals sent 11 batters to the plate in the decisive seventh, but only had the three hits, their only three hits of the game. The Cardinals didn’t need many, and for a long time they didn’t have one.

Keller, easing back toward full strength from his injury, walked a batter and hit a batter in the first inning. Twenty-four batters into the game the Cardinals still had more hit batters (two) than hits (zero). Keller tried to squeeze as much as he could out of his limited innings, and he retired the final 14 Cardinals he faced. With an Cards offense that often resembles a rented bike — sticky, grating, pedals flailing, gets carried away going downhill — Keller broke the chain. He didn’t play coy after the game about if he knew it was a no-hitter, and just as he didn’t play coy with a fastball that could reach 97-mph during his start.

“I knew I had no hits going from the first batter,” Keller said. “Throw the (crud) out of the fastball and let it do what it does.”

What it did, with catcher Jake Stallings again establishing the lower corner of the strike zone, was buy time for the Pirates to steadily build a lead. Entering the game, Kwang Hyun Kim had not allowed an earned run in four starts, and he pitched 24 consecutive scoreless innings. The only run he allowed as a starter this season, his first in the majors, had been a solo home run to Ian Happ, at Wrigley Field, more than a month ago

A home run ended one streak but continued another. Bucs rookie Ke’Bryan Hayes, Charlie’s son, reached an elevated pitch and lofted it to center field for a 1-0 lead in the first inning. In the third, No. 9 hitter Jose Osuna pulled a pitch from Kim into the left-field nook for another solo homer. Kim’s first three runs allowed as a Cardinal starter came on homers. The Pirates would score as many runs of Kim as he allowed in his previous six appearances combined.

They extended the lead with a few traditional touches in the sixth — an RBI single here and a sacrifice fly there off reliever Jake Woodford. The rookie Woodford (1-0) stopped the scoring there, pulled Kim’s inning out of trouble and earned his first big-league as a result.

As a precaution, Kim pitched with a protective lining in his cap, one prescribed by doctors to protective as much as possible from a line drive to the skull. As a result of the renal infarction that hospitalized him this month, Kim is on a blood thinner, and while his doses are adjusted the days he pitches, there is still concern about contact, especially at high velocity.

“It’s kind of hard, so when I pitch it is kind of uncomfortable with my windup,” Kim explained, as relayed by translator Craig Choi. “That’s what the doctor prescribed, so even though it’s uncomfortable I tried to do what they told me. The head is the most important part of the body, so that’s why I had the protective cap.”

True to their plan to bring him back from injury, the Pirates had the hard stop with Keller after six, and and unlike those seven-inning doubleheaders Saturday’s game was a nine-inning number. Pittsburgh turned to reliever Geoff Hartlieb, a Lindenwood University product, and the lead sprang leaks.

Hartlieb walked two batters on his first nine pitches, had loaded the bases after hitting Molina with his 16th. He did not get an out before lefty Sam Howard entered. By Howard’s fourth pitch, the Cardinals had three runs. On Howard’s seventh pitch, Edman’s single gave the Cardinals the lead and it took them less than an inning to vaporize what Pittsburgh needed six innings to create.

Genesis Cabrera handled the final five outs for the save, and sent the Cardinals into their final week of the regular season. The claustrophobia of doubleheaders is behind them, and they’ve emerged from adverse circumstance into a relatively familiar reality. A playoff berth is theirs — if they win.

“The game today kind of felt like an off day with how many doubleheaders we’ve been playing,” O’Neill said. “We were only at the yard for six, seven hours, as opposed to 10. It was a nice change of pace. It’s the schedule we have. It’s the scenario that we’re in. So we have to make the most of it. . . .

“We know it’s time to make some noise.”

The Cardinals' rookie came up for his final at-bat of the evening a home run shy of the team's first cycle since 2005.

CORRECTS TO SINGLE, INSTEAD OF DOUBLE - St. Louis Cardinals' Harrison Bader celebrates with Paul Goldschmidt after scoring on a single by Tommy Edman during the seventh inning of the team's baseball game against the Pittsburgh Pirates in Pittsburgh, Saturday, Sept. 19, 2020. (AP Photo/Gene J. Puskar)

St. Louis Cardinals starting pitcher Kwang Hyun Kim collects himself on the mound after giving up a solo home run to Pittsburgh Pirates' Jose Osuna during the the third inning of a baseball game in Pittsburgh, Saturday, Sept. 19, 2020. (AP Photo/Gene J. Puskar)