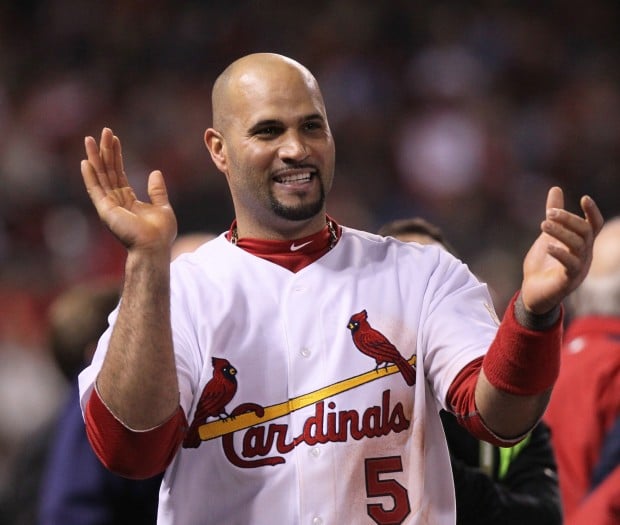 Cardinals' Albert Pujols celebrates after Game 6 of the World Series between the St. Louis Cardinals and the Texas Rangers Thursday, Oct. 27, 2011, at Busch Stadium in St. Louis, Mo. Photo by Chris Lee, clee@post-dispatch.com 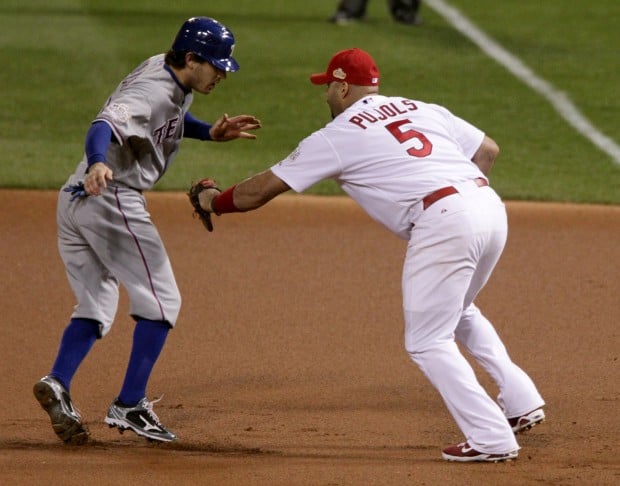 Albert Pujols picks off Ian Kinsler with a throw from catcher Yadir Moling in the first inning of Game 7 of the World Series between the Texas Rangers and the St. Louis Cardinals Friday, Oct. 28, 2011, at Busch Stadium in St. Louis. Photo by Robert Cohen, Rcohen@post-dispatch.com 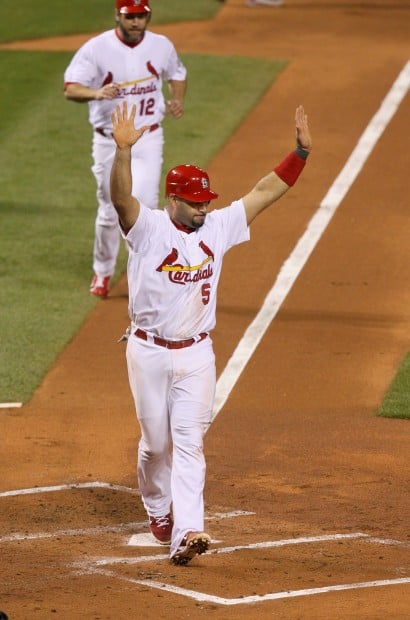 Albert Pujols crosses home plate as Lance Berkman runs in behind him to score in the first inning on a double by David Freese during Game 7 of the World Series between the Texas Rangers and St. Louis Cardinals at Busch Stadium on Friday October 28, 2011 in St. Louis. Photo by Laurie Skrivan, lskrivan@post-dispatch.com

The Cardinals and Miami Marlins further defined themselves Monday as the leading contenders to secure the three-time National League most valuable player during alternating talks with Pujols' representation at the headquarters hotel for Major League Baseball's winter meetings.

Having recently spoken directly to Pujols, Cardinals chairman Bill DeWitt Jr. and general manager John Mozeliak met for roughly an hour earlier in the day with agent Dan Lozano before scheduling a late-night session that was expected to produce a modified proposal.

That meeting, however, was postponed until this morning and apparently will occur without DeWitt, who left town Monday night.

While DeWitt and Mozeliak took turns emphasizing that Pujols' situation represents an organizational priority, the Cardinals apparently have yet to make a formal tender to replace January's rejected nine-year bid of $198 million-$205 million.

The Marlins also met at least twice with Lozano Monday, a day after agreeing to terms with free agent shortstop Jose Reyes on a six-year, $106 million deal.

One club executive rated the Marlins' chances of signing Pujols as "50-50" while owner Jeffrey Loria stated publicly the team was still equipped to pursue another franchise player.

The Cardinals, long reluctant to move without competition for Pujols, now appear motivated to glean a clear direction, perhaps before leaving the Anatole Hilton on Thursday. The Marlins, who modified a 4-week-old bid Monday night, appear to be forcing the issue.

"In this setting, things have the ability to move faster," Mozeliak said Monday afternoon. "As I sit back, look and listen to things, it does seem you're going to see some market movement."

Both parties declined to offer specifics about any fresh proposal, but Mozeliak acknowledged that the Cardinals are likely to approach Pujols with a structure different from what they proposed almost 11 months ago.

"Even though the market is speaking there's no way for us to validate it. The only time you validate it is when a player signs, when you can put it on the board," Mozeliak said. "Other than that, it's speculation and you're trying to stay within your framework of what you feel is an appropriate deal."

The Cardinals are unlikely to remain wed to a nine-year proposal since last season represented the first installment of the rejected extension.

Mozeliak made no predictions about a potential signing but allowed that the matter is "evolving."

"I'm not going to put a timetable publicly on it," Mozeliak said. "As long as we continue operating [within talks] we're OK."

The Chicago Cubs also engaged Lozano in talks about Pujols Monday and are believed to have made a qualifying bid. Lozano declined Monday night to address any team's status in negotiations.

Cubs president Theo Epstein attempted to deflect speculation about his team's interest in Pujols by noting that Lozano also represents free agent pitcher Rodrigo Lopez, another Cubs target. However, the Post-Dispatch confirmed early this morning that the Cubs submitted a bid for their rival's longtime offensive centerpiece.

Monday's flurry of activity contrasted what had been a relatively static situation in recent weeks. DeWitt said he remains hopeful of a successful resolution. The club chairman reiterated, "I like our team without [Pujols]. I like it a lot more with him."

Mozeliak did not characterize the content of his and DeWitt's recent phone conversation with Pujols. Asked if he underscored the team's desire to retain him, Mozeliak said, "I do think it was touched on but not beat up."

The Marlins' interest in Pujols has meanwhile evolved from a perceived novelty to a legitimate challenge to the Cardinals. The club already has secured free agent closer Heath Bell, whom it introduced at the meetings Monday, as well as Reyes. Intent on creating a marketing splash as they enter a new but still unnamed stadium, the Marlins appear to be concentrating on landing another impact hitter rather than help for an injury-prone starting rotation.

Asked whether his club retained the capacity to secure another signature player, Loria said, "We'll see. We might. I don't want to answer that yet."

The Marlins are scheduled to meet with Lozano again today. Should momentum continue to build, Pujols is available to travel to the meetings this afternoon or on Wednesday.

Loria, who was cornered outside the media room following a news conference to officially announce Bell's signing, obliquely referred to Pujols in response to one question as "one big hitter. You mean the baseball hitter?" Though Loria initially declined to answer questions about Pujols by name, he allowed that "there's the possibility of another player or two we're looking at."

The Marlins are believed able to support a $100 million payroll next season, placing them in roughly the same neighborhood as the Cardinals, who have budgeted about $110 million for theirs.

Though Pujols has waited two years for the Cardinals to present him a palatable offer, negotiations between Mozeliak, DeWitt and Lozano have assumed a moderate tone. Initial rancor that complicated talks for free agent left fielder Matt Holliday at the 2009 meetings in Indianapolis has not surfaced, either at last month's general managers meetings in Milwaukee or in Dallas.

Mozeliak said he had not yet reached a "point of reflection" on the process. He could not guarantee that the Cardinals would receive the opportunity to match or beat a rival offer, though sources familiar with the process said both he and DeWitt have sought such assurances from Lozano.

A third team has entered the bidding for Albert; Also: Lohse, Westbrook come up in trade talks

Submit questions for the P-D baseball writer, who will chat live from MLB's winter meetings

What could possibly go wrong in Miami? Many things, actually.

Reds manager says it will be 'a little strange' to play Cardinals now.

Panel says it looked at 'other than numbers' for former Cubs star.

Dodgers are close to signing Harang

The Los Angeles Dodgers are nearing a deal with pitcher Aaron Harang, a source said Monday, and have agreed to a $6 million, two-year contract…

Submit Cards and MLB questions for the P-D baseball writer in Jupiter, Fla.

Cardinals' Albert Pujols celebrates after Game 6 of the World Series between the St. Louis Cardinals and the Texas Rangers Thursday, Oct. 27, 2011, at Busch Stadium in St. Louis, Mo. Photo by Chris Lee, clee@post-dispatch.com

Albert Pujols picks off Ian Kinsler with a throw from catcher Yadir Moling in the first inning of Game 7 of the World Series between the Texas Rangers and the St. Louis Cardinals Friday, Oct. 28, 2011, at Busch Stadium in St. Louis. Photo by Robert Cohen, Rcohen@post-dispatch.com

Albert Pujols crosses home plate as Lance Berkman runs in behind him to score in the first inning on a double by David Freese during Game 7 of the World Series between the Texas Rangers and St. Louis Cardinals at Busch Stadium on Friday October 28, 2011 in St. Louis. Photo by Laurie Skrivan, lskrivan@post-dispatch.com