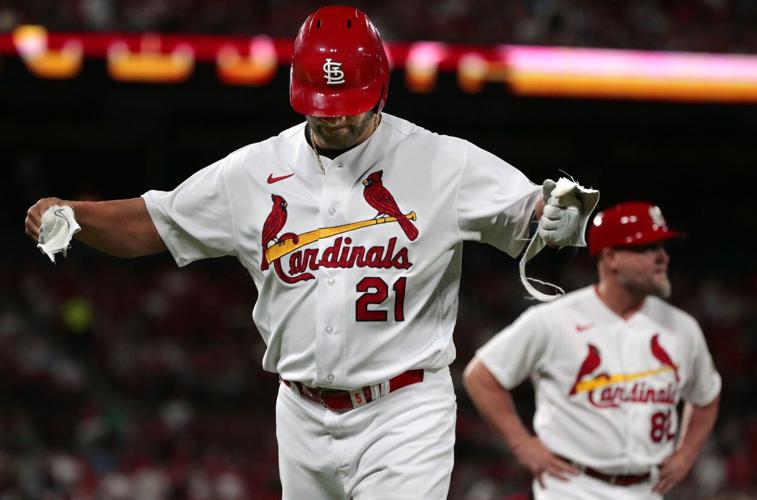 The Cardinals' Albert Pujols shreds his batting gloves after a pop out in the fourth inning against the Cincinnati Reds on Thursday, Sept. 15, 2022, at Busch Stadium.

The Cardinals' Brendan Donovan is out at home on a tag by Cincinnati Reds catcher Austin Romine in the third inning on Thursday, Sept. 15, 2022, at Busch Stadium. The Cardinals' Paul Goldschmidt doubled on the play, scoring Lars Nootbaar. 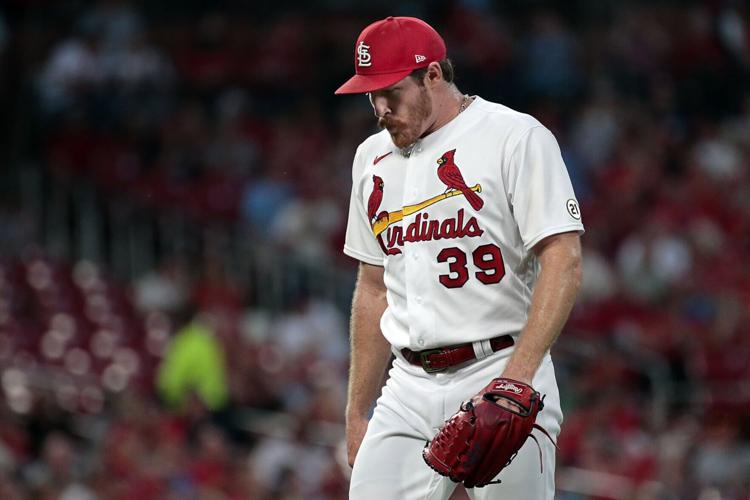 Cardinals starting pitcher Miles Mikolas walks off the field after giving up a second-inning solo home run to the Reds' Nick Senzel on Thursday, Sept. 15, 2022, at Busch Stadium.

An inability to do much around the plate all evening other than throw Reds out near it caught up with the Cardinals when the snooze button on their offense lifted in the ninth.

The Cardinals had collected two outs at home plate on superb defensive plays but only one hit through the first eight innings of Cincinnati’s visit. When the Cardinals stirred for two singles and a walk in the ninth inning to bring the crowd to its feet, the late-arriving offense could not muster enough to overtake the Reds in a 3-2 loss at Busch Stadium on Thursday. Spells of moribund offense against some of the worst teams in the standings have been an annoyance when it comes to the division race but are a recurring drag on the team’s momentum.

Brendan Donovan’s leadoff single in the ninth ended a streak of 15 consecutive batters without a hit, and the Cardinals got the ninth inning to Albert Pujols with the bases loaded and a chance to win with a single swing.

Sitting on career homer No. 697, Pujols sent a ball skyward and deep to right field, but not deep enough to clear the bases with history. It did make things interesting in the present. Pujols’ sacrifice fly — the 123rd of his career — scored Donovan and brought the tying run to the plate.

That was as far as the rally got.

Pinch-hitting Corey Dickerson chopped a grounder to third for the final out of the game to give Reds right-hander Alexis Diaz the wobbly but successful save, his seventh.

Miles Mikolas had a rather laborious start that included more work than genuine trouble but put the Cardinals behind all the same. Mikolas needed 101 pitches to complete six innings, and he allowed three runs on eight baserunners. Only once did Mikolas have a brisk inning of three batters, and while he was able to weave around most of the hits he allowed two that went for 400-foot homers that created the Reds lead.

Chase Anderson, who took two losses in the Cardinals’ three-game visit to Cincinnati last month, started the Reds’ stingy pitching with five solid innings. He allowed one run on one hit and two walks. Anderson retired the final six batters he faced to begin a streak of 15 consecutive Cardinals retired until Donovan’s single of Diaz.

Air Miles starting to add up

Cincinnati center fielder Nick Senzel scored the first run of the game when he lofted a 424-foot home run over the left field seats and continued what’s become an airborne trend in Mikolas’ starts. Including a solo homer in the sixth inning, Mikolas had allowed seven home runs in a stretch of 30 innings.

The 24 home runs against Mikolas this season are the most allowed as a Cardinal and 10 more than his next closest teammate.

Mikolas has minimized the trouble such damage can do by keeping his walks down. He scattered three in his six innings against Cincinnati, and still he’s allowed only 36 this season. Each of the two home runs he allowed to Cincinnati were solo shots, and they both traveled more than 400 feet. Mikolas had two outs and two strikes when Senzel tagged a full-count pitch over the left field wall for the 1-0 lead in the second inning. In the sixth inning, Mikolas had two outs when Aristides Aquino jumped on the first pitch he saw for his ninth homer of the season.

Aquino’s homer gave the Reds a 3-1 lead by the time Mikolas turned the ball over to the bullpen. In his past five starts, Mikolas has bounded toward 200 innings. The right-hander said he trained all offseason to be ready, even after two seasons interrupted by injury, to shoulder the workload of a full-time starter, with no limitations.

He finished six innings against Cincinnati and collected a quality start. The homers are starting to speckle the pitching lines in greater frequency. He’s allowed at least one in 12 of his past 15 starts.

Corner outfielders give Cardinals a chance

On consecutive plays in the top of the eighth inning, the Cardinals’ young corner outfielders, one of them still improving at the position, made plays that kept the game within reach.

The Cardinals had a grand total of one hit when the Reds were on the brink of extending their lead to at least three runs, and maybe more if not for rookie Alec Burleson’s coverage in left field. Aquino yanked a double toward the left-field corner, and that gave Donovan Solano license to run as far as he could from first base. He had to stop at third because Burleson tracked the ball down so quickly and returned it to the infield before Solano could round third.

Instead of a run home, the Reds had runners stuck — but in scoring position.

That proved pivotal on the next ball in play. The Reds swapped Solano out for a pinch runner, Stuart Fairchild, who had a better straight-line chance to score on a fly ball. Senzel provided that fly ball, lifting one to right field. Lars Nootbaar caught the ball, set his feet, and loosed a dart. The right fielder, wearing No. 21 on Roberto Clemente Day and playing Clemente’s position, had a Clemente like throw that arrived on time for Yadier Molina’s tag and the double play.

The Reds went from one out and two runners in scoring position to grabbing their gloves for the bottom of the eighth inning having not increased their lead at all.

In the third inning, the Cardinals threw a runner out at home and failed to tie the game when the Reds responded in kind.

In the top of the third inning, Mikolas had his most difficult stretch of the game. Within the span of five batters, the right-hander allowed two walks and two extra-base hits, and that leaked into the third inning when the first three batters reached on a walk, a double, and a walk, respectively. The Reds doubled their score with a sacrifice fly for the second out of the inning.

That put runners at the corners with the cleanup hitter at the plate.

Jonathan India, the reigning Rookie of the Year in the NL, broke from first as if to draw the throw from Molina and give T.J. Friedl a path to take home. Molina pump-faked. That froze Friedl at third. Molina threw to second to get India in a rundown, and after one throw on the other side of the field, Friedl took off. Gold Glove-winning first base Paul Goldschmidt shifted his feet and threw to Molina to get Friedl with the quick tag. That out ended the inning and kept Cincinnati from widening the lead to 3-0.

In the bottom of the inning, the same actors flipped the script.

Goldschmidt pulled an RBI double down the third-base line. Friedl gave chase to the left-field wall. Goldschmidt’s hit easily scored Lars Nootbaar, and third base coach Ron “Pop” Warner waved Brendan Donovan around third with a chance to tie the game. Friedl’s throw from the left-field line got Kyle Farmer at cutoff, and Farmer’s throw home was swift and true to get Donovan at the plate for the third out.

And those were just two of Friedl’s adventures around the ballpark Thursday. The Reds’ leadoff hitter and left fielder crashed into the wall trying to make a catch on a foul fly ball. He fouled a ball off his knee. In the fourth inning, he made a diving catch on a line drive — but doing so wrenched his wrist against the ground.

Three times in the first half of the game, the Reds’ athletic trainer jogged out to check on Friedl for an injury to three different parts of his body.

Friedl remained in the game each time.

Cardinals notebook: Besides Lars Nootbaar, four others wear No. 21 in Clemente's honor

Right-hander struck out three Reds on nine pitches to join Gibson and Isringhausen as the only Cardinals with such a flawless inning of whiffs.

Hudson pitches a career-high eight innings as Cardinals down Reds, 5-1, in first game of a doubleheader Saturday at Busch Stadium.

Jack Flaherty takes the mound for the Cardinals looking for his first win of the season.

The Cardinals' Albert Pujols shreds his batting gloves after a pop out in the fourth inning against the Cincinnati Reds on Thursday, Sept. 15, 2022, at Busch Stadium.

The Cardinals' Brendan Donovan is out at home on a tag by Cincinnati Reds catcher Austin Romine in the third inning on Thursday, Sept. 15, 2022, at Busch Stadium. The Cardinals' Paul Goldschmidt doubled on the play, scoring Lars Nootbaar.

Cardinals starting pitcher Miles Mikolas walks off the field after giving up a second-inning solo home run to the Reds' Nick Senzel on Thursday, Sept. 15, 2022, at Busch Stadium.