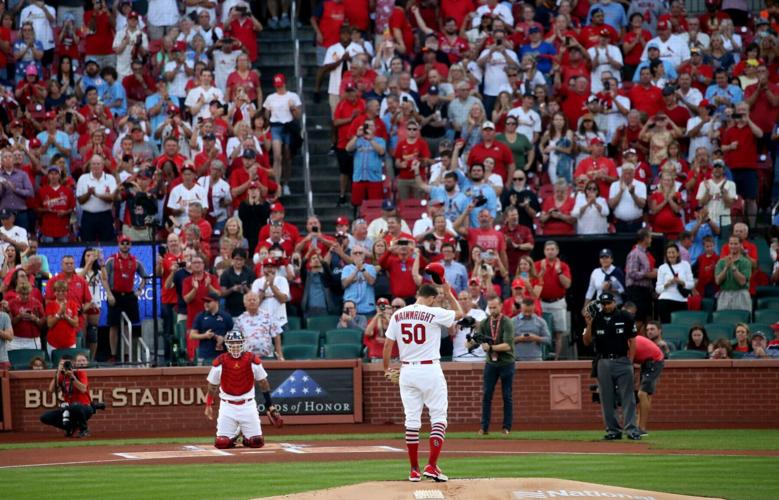 Cardinals starting pitcher Adam Wainwright tips his cap to a standing ovation as he and catcher Yadier Molina take to the field for the 325th time as a major-league battery, breaking the record set in 1975 when Detroit's Mickey Lolich and Bill Freehan got to 324, during warmups before the first inning against the Brewers on Wednesday, Sept. 14, 2022, at Busch Stadium. 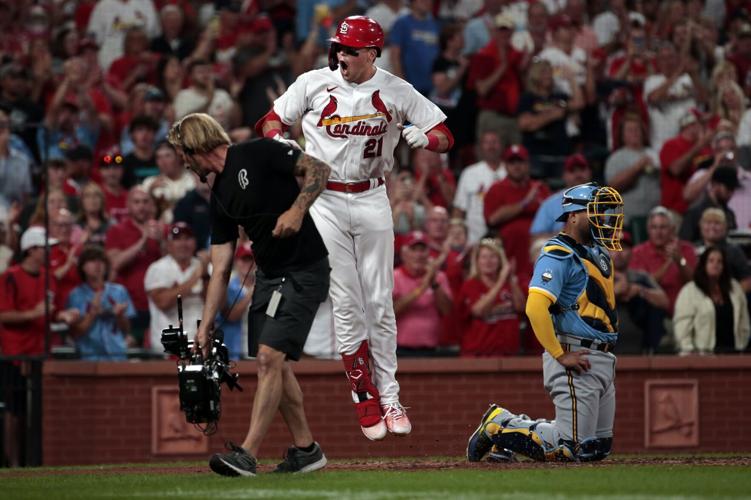 The Cardinals' Lars Nootbaar arrives home after hitting a solo home run in the fifth inning against the Brewers on Wednesday, Sept. 14, 2022, at Busch Stadium. 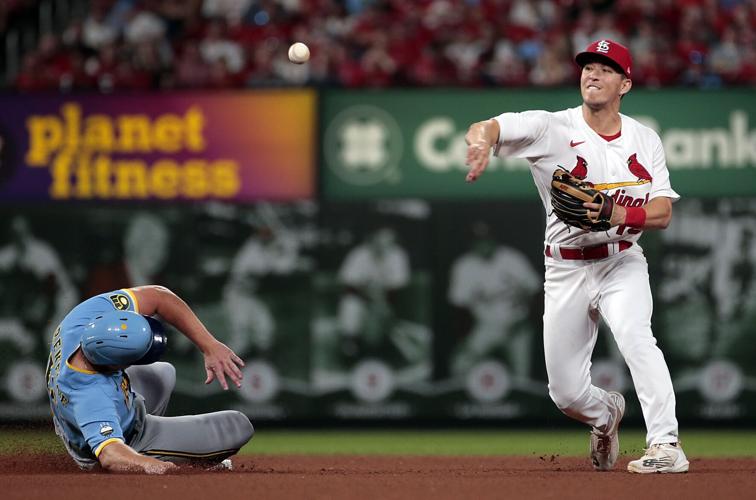 Cardinals shortstop Tommy Edman gets Hunter Renfroe of the Brewers out at second base as Kolten Wong safely reaches first base on a ground ball in the seventh inning on Wednesday, Sept. 14, 2022, at Busch Stadium.

The start made history.

The finish made them a winner.

And one late milestone stroke made Wednesday all the more memorable.

Adam Wainwright and Yadier Molina reset the major-league record for most starts as a tandem with the first pitch against the Milwaukee Brewers at Busch Stadium, their 325th together. What made them a winner was the work that followed. Staked to a lead by home runs from Nolan Arenado and Lars Nootbaar off Corbin Burnes, the reigning Cy Young Award winner, the Cardinals’ bullpen worked four scoreless innings to reward the battery with a 4-1 victory in front of a sellout crowd of 46,459.

The win restored the Cardinals’ eight-game lead in the National League Central and with only two games remaining with the Brewers cleaved the magic number down to 12.

A count up that began a little more than five years ago reached what was once unsure — that two players, in their early 40s, would remain on the same team and together long enough to make 325 starts together. The number became a private quest for Wainwright and Molina, and a few people close to the catcher described this past week how sharing that major-league record with Wainwright was part of what drove Molina to return this season at age 40 and return from injury in the middle of this season.

The Cardinals’ tandem, as close as brothers despite spending so much time 60 feet, 6 inches apart, broke a record held for generations by Detroit’s Mickey Lolich and Bill Freehan. With each start they put the unreachable further ahead, as no other active battery is within 200 of them, and third on the list is Molina and Jack Flaherty, at 69. Molina has three of the highest active totals.

For his third consecutive start, Wainwright (11-9) pitched five innings and nothing beyond. He yielded the mound and a two-run lead to the bullpen. Andre Pallante, Jordan Hicks, Giovanny Gallegos and Ryan Helsley carved through the next four innings to keep Milwaukee from mustering a challenge to that lead and play spoiler to the evening.

Helsley struck out two in the ninth to secure his 17th save.

It took two swings for the Cardinals to put a rally in gear to reclaim the lead for Wainwright shortly after he first misplaced it.

The Brewers, on a sacrifice fly, took a 1-0 lead in the top of the second. The first two batters of the bottom of the second inning struck with hits. Arenado led off the inning with his 29th home run of the season, tying the game. Brendan Donovan followed with a single. The inning ultimately found Molina with one out and runners at the corners. The Cardinals’ catcher delivered the go-ahead RBI with a line-drive single to left.

A 2-1 lead meant Molina had the 31st go-ahead RBI of his career in a game started by Wainwright. That, fittingly, tied him for the third most all-time. One of the other catchers he’s tied with, fittingly, is Freehan, who also had 31 go-ahead RBIs in Lolich starts.

Three innings later, came a homer from one of the batters the Cardinals thought would be a strong matchup for them against pitchers like Burnes. Nootbaar connected on a 2-0 pitch and drove it 452 feet to center field field. Nootbaar’s 12th homer of the season widened the Cardinals lead for the bullpen to hold.

In each of his previous two starts, Wainwright felt like his delivery was out of sync, and the line scores reflected how he felt.

He allowed four runs on nine hits in five innings each game, and after the second one — a loss to Washington — he described the work that he had to do in the bullpen. Cardinals manager Oliver Marmol attended part of the bullpen to see the right-hander work, listening as he stopped after each pitch to adjust what he felt was oft-kilter, what stretch of his leg or shift of his torso was throwing off the timing and then the movement of his pitches.

“He hasn’t been good the last two times out, and he hasn’t looked right,” Marmol said. “But the work that goes into the bullpen and figuring out why is my body is not in sync, why are my pitches not doing what they’re supposed to do — when you’re as confident as he is in his abilities (the work is clear). There’s this back and forth collaboration after each pitch in figuring out and he’ll figure it out. That’s what he’s done his whole career.”

He did but not for the whole of his start Wednesday.

Christian Yelich showed no intention of swinging at the first pitch as Wainwright and Molina assured the record-setting start. He let history happen.

The former MVP saw two more pitches before striking out on a called strike three. The inning went sideways from there. Two singles and a two-out walk loaded the bases on Wainwright and brought Andrew McCutchen to the plate. Another former MVP — and the one who has faced Wainwright the most often in his career — McCutchen gave Wainwright a gift. An excuse-me swing with a bouncer back to the pitcher to strand three runners.

It was the first of two times in the first four innings that Milwaukee would leave the bases loaded.

The second began with back-to-back singles and a sacrifice fly that gave Milwaukee the first lead of the game. Before Wainwright could regain control of the inning, the Brewers had three singles and the run in. But the rally wheezed from there. In the fourth, the bottom of the Brewers’ order again sparked a threat. With two outs, Milwaukee got two singles and a walk from Wainwright to load the bases. The inning ended with a fly out.

Through four innings, Wainwright had bobbed and weaved and curved his way out of trouble — and the Brewers had left eight runners on base, five in scoring position.

An escape from one inning had all the feel of Pearl Jam playing “Alive” or Wainwright warming up to Blake Shelton’s “God’s Country” — a reliable show playing the classic.

With former teammate Kolten Wong at first and one out, Wainwright once again faced McCutchen. No active player has more than McCutchen’s 84 plate appearances against Wainwright, and no active player has more than McCutchen’s 17 strikeouts in those plate appearances. Wainwright could not land his cutter for a strike against the veteran designated hitter. He got the first strike of the at-bat when McCutchen clipped a sinker for a foul ball. Wainwright slipped a curve past McCutchen before the cutter again failed to nick the strike zone.

With a 3-2 count, Wainwright went back to his is trusty and true curve.

The 74-mph bender dipped past McCutchen’s swing for a strikeout, and Molina provided the chef’s kiss. He backhanded the pitch while getting to his feet for a throw to second. Wainwright’s signature pitch would be turned into Molina’s signature play. The catcher’s strike beat Wong by a stride for strikeout/throw-out double play that ended the inning.

A curve, a keepsake, some Cherry Coke: How Cardinals Wainwright and Molina made history

Famed battery Wainwright and Molina set the major-league record with their 325th start together and Cardinals win, 4-1. But what about the first-pitch ball?

Cardinals starting pitcher Adam Wainwright tips his cap to a standing ovation as he and catcher Yadier Molina take to the field for the 325th time as a major-league battery, breaking the record set in 1975 when Detroit's Mickey Lolich and Bill Freehan got to 324, during warmups before the first inning against the Brewers on Wednesday, Sept. 14, 2022, at Busch Stadium.

The Cardinals' Lars Nootbaar arrives home after hitting a solo home run in the fifth inning against the Brewers on Wednesday, Sept. 14, 2022, at Busch Stadium.

Cardinals shortstop Tommy Edman gets Hunter Renfroe of the Brewers out at second base as Kolten Wong safely reaches first base on a ground ball in the seventh inning on Wednesday, Sept. 14, 2022, at Busch Stadium.