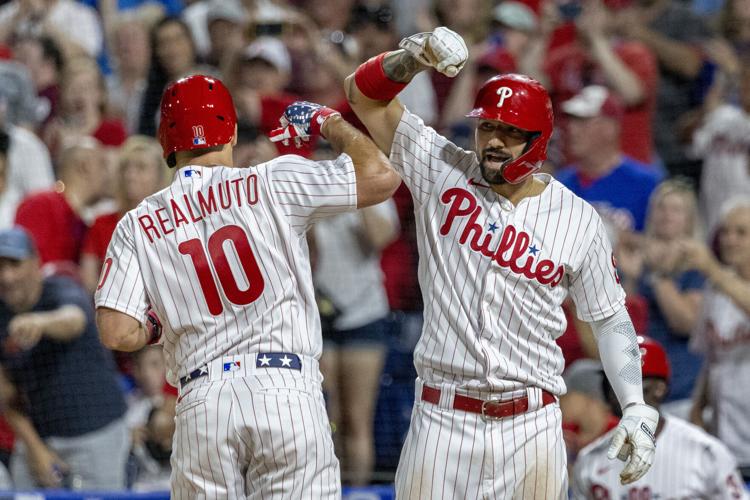 The Phillies' Nick Castellanos, right, congratulates J.T. Realmuto after Realmuto hit a two-run home run during the sixth inning of a game, Sunday, July 3, 2022, in Philadelphia. 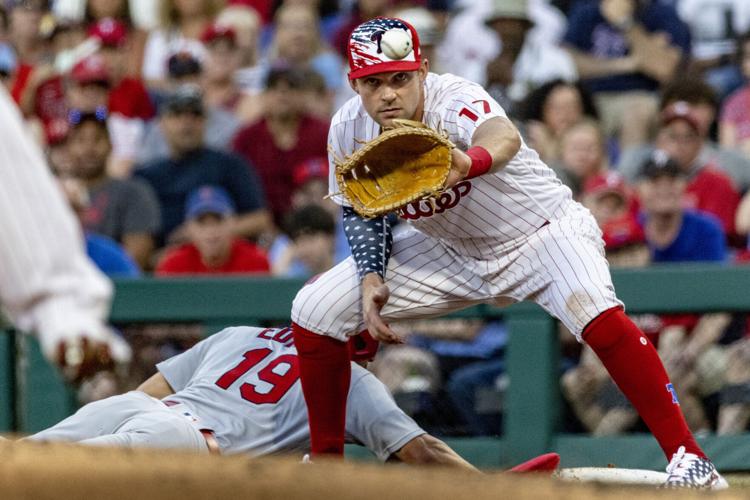 The Cardinals' Tommy Edman (19) is safe at first on a pickoff attempt before Philadelphia first baseman Rhys Hoskins can make the catch during the third inning Sunday, July 3, 2022, in Philadelphia. 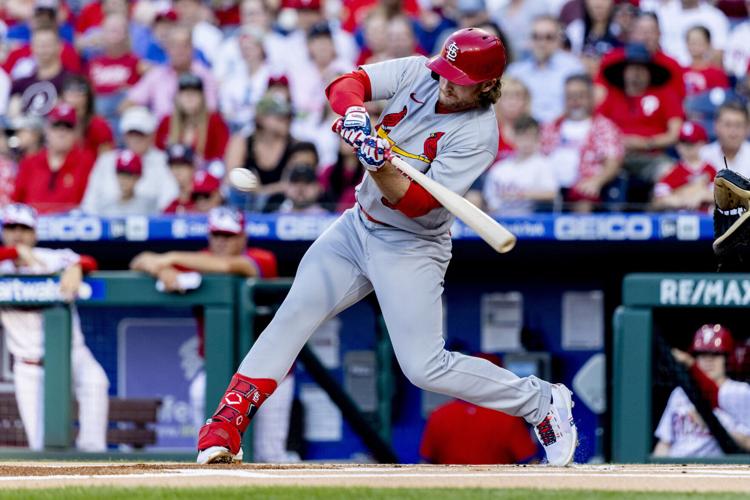 The Cardinals' Brendan Donovan hits a single during the first inning of a game against the Phillies, Sunday, July 3, 2022, in Philadelphia.

PHILADELPHIA — The Cardinals reached the halfway point of the season Sunday night with a 44-37 record after a 4-0 loss to the Philadelphia Phillies, whom they haven’t beaten in a series at Citizens Bank Park since 2017.

Do the math. A similar record in the second half would get them to 88 victories — a total not often associated with a playoff team, although a third wild card this year could make that possible.

Still, the Cardinals only twice since 2000 have qualified for the postseason with 88 or fewer wins in a full season and they have made it 14 times over a full season in that span. In 2012, the Cardinals won 88 games to sneak in as a wild card and they won the World Series in 2006 when they had only 83 regular-season wins.

More to this year’s point, the Cardinals lost the final game of a series for the eighth consecutive time as the Phils won two of the three games in the weekend matchup. Adam Wainwright (6-6) threw just 22 pitches in the first two innings for the Cardinals but then had to throw 81 over the next four and he didn’t even finish the sixth inning after allowing a two-run homer to J.T. Realmuto.

The Cardinals forced Phillies ace Zack Wheeler (7-4) to throw 108 pitches over seven innings but couldn’t scratch. They had just four singles off him and none off two relievers.

Wainwright likes to set a goal of throwing eight pitches per inning, which generally doesn’t happen. But he tossed just 22 pitches through the first two innings, both of which were perfect.

The Phillies made Wainwright work harder in the third, forcing him to throw 19 pitches. But the 40-year-old pitched out of trouble by throwing a double-play ball on a 2-0 pitch to Kyle Schwarber to end the inning.

The inning had been prolonged by a lengthy debate among the umpires after home-plate arbiter Larry Vanover had ruled that Odubel Herrera had fouled a 3-2 pitch off his leg. Herrera had not gone very far toward first.

First baseman Paul Goldschmidt fielded the ball and stepped on the bag anyway.

Cardinals manager Oliver Marmol casually strolled out to ask Vanover to seek counsel from the other umpires because television replays had indicated the ball hadn’t hit Herrera. Finally, that conclusion was reached, Herrera was out and Phils manager Rob Thompson was none too happy when Vanover tried to explain the matter to him.

The Phillies then put together the makings of a rally when Bryson Stott walked on a full-count pitch and former Cardinal Yairo Munoz, a dead fastball hitter, singled off a 90 mph sinker. Wainwright fell behind Schwarber, the June player of the month in the National League, before Wainwright got Schwarber to roll over on a changeup and ground to second baseman Nolan Gorman, who neatly started the inning-ending twin killing.

The Cardinals had four singles off Wheeler through four innings. There was one in each inning.

But only one of them came from a leadoff batter, when Nolan Arenado got his seventh hit in three games by singling off the glove of Alec Bohm to start the fourth.

But Gorman fouled out and rookie Juan Yepez, allowed to swing at a 3-0 pitch, fouled to first baseman Rhys Hoskins before Arenado was cut down trying to steal second by catcher Realmuto. Arenado has no steals in three attempts this year.

Hoskins had entered the game with two homers among his four hits in seven career at-bats against Wainwright.

He cracked his third homer in nine at-bats off Wainwright to open the scoring in the Phillies’ fourth, sending an 85 mph cutter 401 feet to left. Hoskins has nine homers and 17 runs batted in, plus 17 walks, over his past 25 games.

The Phillies threatened further when Realmuto singled to left and Bohm blooped a single to right with two outs but Herrera grounded again to Goldschmidt — with there being no doubt about this one.

Hoskins sent another long drive — this one to left center — in the sixth. But it hit the wall and went for only a double.

Nick Castellanos singled to left, scoring Hoskins to make it 2-0 but apparently thought his day’s work was done as he strolled back to the bag and exchanged pleasantries with his first-base coach as left fielder Brendan Donovan’s ill-advised throw home sailed past catcher Andrew Knizner.

Castellanos remained at first, but scored soon enough as Realmuto jumped a 73 mph curveball and rapped his sixth homer to left field. It was a three-run inning and a 4-0 Phillies lead.

Charleston, Missouri product James Naile had his second strong outing for the Cardinals since being promoted from Memphis.

Helped by an error by Gorman, the Phillies had runners at second and third bses with one out in the eighth but 29-year-old Naile fanned Bohm and Herrera.

The Cardinals take on the World Series champion Atlanta Braves to open a four-game series on July 4. Check out First Pitch for lineups, injuries, and updates!

The Phillies' Nick Castellanos, right, congratulates J.T. Realmuto after Realmuto hit a two-run home run during the sixth inning of a game, Sunday, July 3, 2022, in Philadelphia.

The Cardinals' Tommy Edman (19) is safe at first on a pickoff attempt before Philadelphia first baseman Rhys Hoskins can make the catch during the third inning Sunday, July 3, 2022, in Philadelphia.

The Cardinals' Brendan Donovan hits a single during the first inning of a game against the Phillies, Sunday, July 3, 2022, in Philadelphia.