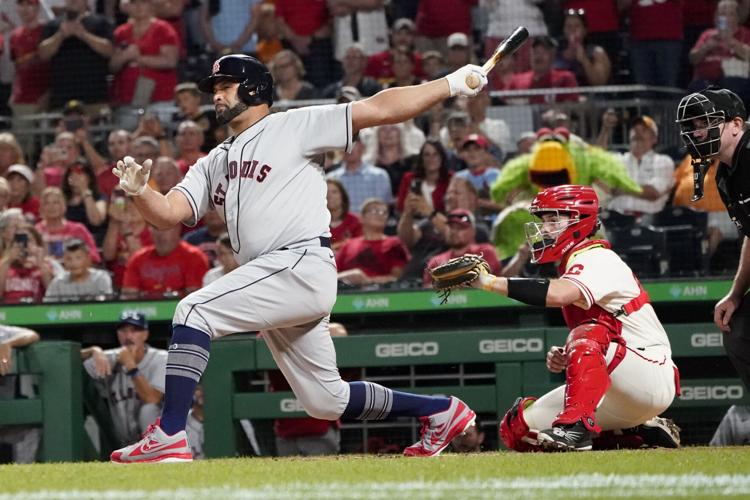 The Cardinals' Albert Pujols bats against the Pirates in the eighth inning of a game Friday, Sept. 9, 2022, in Pittsburgh. 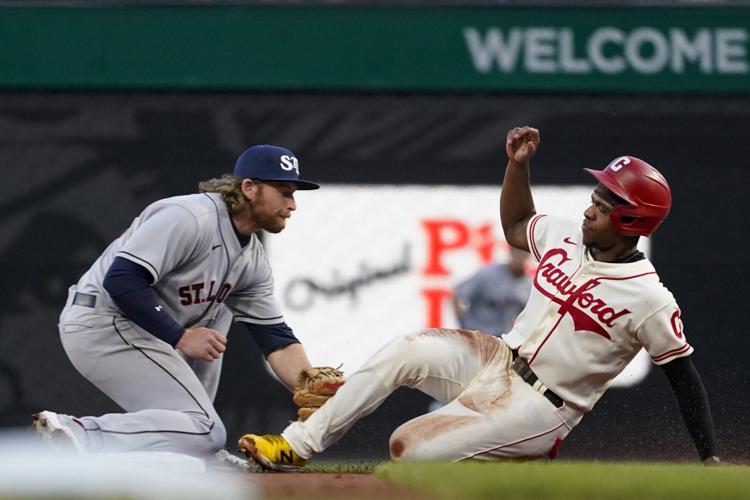 Cardinals second baseman Brendan Donovan, left, tags out Pirates third baseman Ke'Bryan Hayes out at second on an attempted steal during the third inning of a game Friday, Sept. 9, 2022, in Pittsburgh.

PITTSBURGH — The Cardinals, who had been feasting on a softer part of their schedule, suddenly have found some prickly tendencies in their recent foes.

After being fortunate to win two of four games at home against the Washington Nationals, who have the worst record in the National League, the Cardinals encountered the next-worst club, the Pittsburgh Pirates on Friday night at PNC Park. And for the first time since July 24-26, the Cardinals lost for a second successive game, falling to the Pirates 8-2.

The main story line was that the Cardinals had just one hit (which didn’t score a run) in nine at-bats with runners in scoring position. A subordinate plot is that Miles Mikolas, who was brilliant in shutting out Chicago for eight innings in his previous start, reverted more to the form he has shown since the All-Star break.

On one hand, Mikolas struck out eight, his second-highest total of the season, but that took pitches. He threw 100 of them in five innings, and his record evened at 11-11 as he passed the 180-inning mark.

The Cardinals staff has offered up 64 hits in the past five games.

Cardinals score, excitement heightens but ...Paul Goldschmidt became the first Cardinal to score 100 runs in successive seasons when he doubled in the sixth, moved up on a single by Nolan Arenado and came home on a force-out grounder by Corey Dickerson. That made it 4-1 and Goldschmidt was the first Cardinal to achieve 100-100 since Albert Pujols did it from 2008-11 and, before that, from 2001-06.

Then Tyler O’Neill walked for the second time to fill the bases with one out.

Pittsburgh manager Derek Shelton removed right-handed starter Roansy Contreras for his only left-hander in the bullpen, Manny Banuelos. Cardinals manager Oliver Marmol had just the right man to counter this move. Or so it seemed.

Right-handed-batting Pujols, who has more home runs (32) at PNC Park than any visiting player despite playing here only once for the Los Angeles Angels in 10 seasons with them, came off the bench to hit for left-handed-batting Alec Burleson. But instead of visions of Pujols’ 696th career homer, which would have tied Alex Rodriguez for fourth place on the career list, it turned into Pujols’ record-extending 425th double play grounded into, and the inning ended at 4-1.

The Cardinals got another run in the seventh when Pittsburgh center fielder Bryan Reynolds missed on an ill-advised diving attempt on Tommy Edman’s blooper and played it into a double, scoring Lars Nootbaar, who had been 0 for 19 but walked. Goldschmidt, however, struck out against right-hander Chase De Jong, leaving the Cardinals 1 for 9 with men in scoring position.

The Pirates figured build their lead back in the seventh when Reynolds, facing left-hander Zack Thompson, doubled high off the right-field wall. Woodford relieved to face Rodolfo Castro, who singled to right.

Right fielder Nootbaar’s throw home was well wide and catcher Andrew Knizner had to flag it down, but Reynolds had stopped between third and home. Knizner fired to third, but his throw hit Reynolds in the back. Reynolds thought of trying to get back to third ahead of Arenado, who had recovered the ball, but headed home instead. Arenado fired to Knizner, who ran down Reynolds and tagged him out. Knizner then winged a throw to second to nab Castro, who was tagged out by Nootbaar, rejoining the action he started.

So Nootbaar is believed to the first right fielder in Cardinals history to have an assist and a putout on the same play without catching the ball.

ONeil Cruz, the power-hitting, 6-foot-7 Pirates rookie shortstop, doubled, tripled and singled in his first appearance against the Cardinals this season. He tripled in two runs in the fifth as the Pirates’ push to expand a 1-0 lead to 4-0.

Cal Mitchell, whose two-out single in the ninth inning broke up Mikolas’ no-hitter in June, singled off the glove of Cardinals third baseman Arenado to start the fifth. Mikolas then allowed a single to right by No. 9 hitter Jason Delay before Cruz, who had run his hitting streak to six games, tripled into the left-center-field gap.

Both runners scored. The Cardinals had a chance to get Cruz at third, but the relay throw went home instead and Cruz was at third, in position to score on Reynolds’ single through a drawn-in infield.

Mikolas ended the inning at 100 pitches. Since the All-Star break, he has allowed 35 runs in 60 innings after allowing 35 runs in his first 121⅓ innings.

The Cardinals were 0 for 5 with runners in scoring position in the first four innings, which were scoreless against Contreras.

They left the bases loaded in the fourth when Knizner, who had left a runner at second with a fly out to end the second, popped to shortstop to end this inning. The Cardinals had loaded the bases with two out as Dickerson stroked a double to left; O’Neill, back in the lineup after being out a day with a stiff neck, drew a walk; and Burleson reached as catcher DeLay muffed his chopper in front of the plate.

Mikolas had walked Pittsburgh cleanup hitter Ben Gamel three times in eight plate appearances in their careers, although Mikolas had held Gamel hitless in five official at-bats. Gamel was 1 for 6 after leading off the second as he hit a long homer to center field to put the Pirates ahead.

The home run was a staff-high 22nd allowed by strike-thrower Mikolas. But many of those home runs have come with nobody on, similar to this one, as Mikolas has walked only 33 batters in 29 starts.

Through four innings, which took him 74 pitches, Mikolas had allowed four hits and two walks but just the one run. After Cruz doubled to right to give the Pirates runners at second and third with one out in the third, Cardinals second baseman Brendan Donovan dived to his right to spear Reynolds’ liner and double off Cruz second to end the inning.

Mikolas then caught Chavis looking at a third strike to leave two runners on in the Pittsburgh fourth.

Many of the fans at PNC Park, and there were some active ones, wore the orange of the Tennessee Volunteers, who are in town to play Pitt on Saturday afternoon at nearby Heinz Field.

Football chants between the Vols’ supporters and those of Pitt broke out intermittently, even with a reasonably interesting baseball game going on.

The Cardinals' Albert Pujols bats against the Pirates in the eighth inning of a game Friday, Sept. 9, 2022, in Pittsburgh.

Cardinals second baseman Brendan Donovan, left, tags out Pirates third baseman Ke'Bryan Hayes out at second on an attempted steal during the third inning of a game Friday, Sept. 9, 2022, in Pittsburgh.