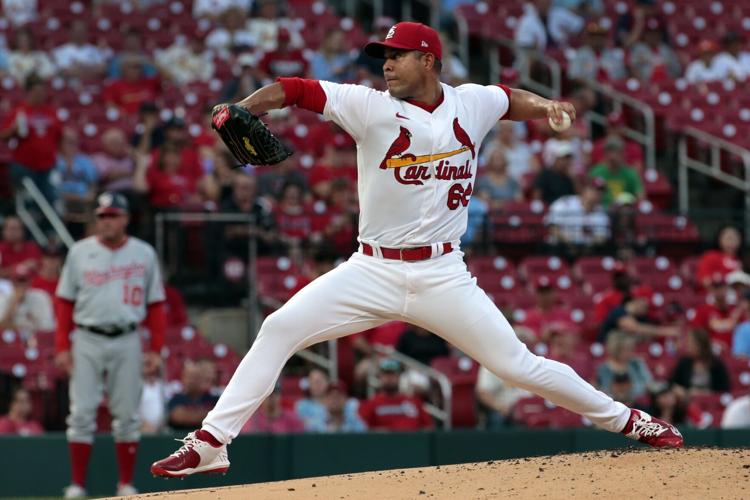 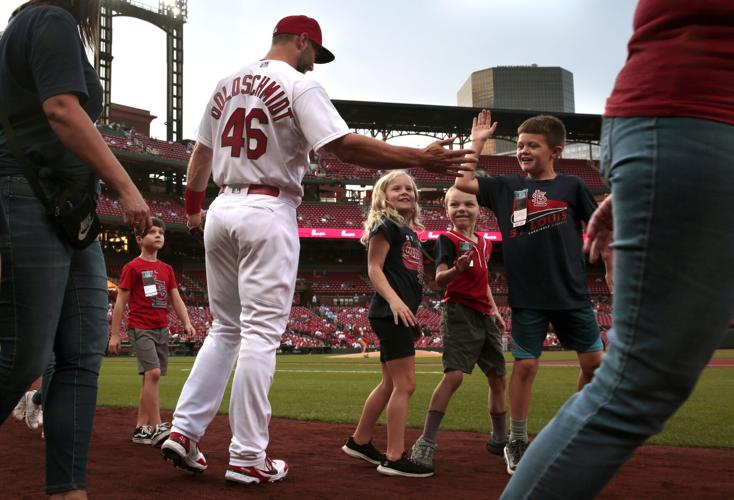 Cardinals first baseman Paul Goldschmidt greets national anthem singers as he walks to the field for warmups against the Nationals on Tuesday, Sept. 6, 2022, at Busch Stadium. 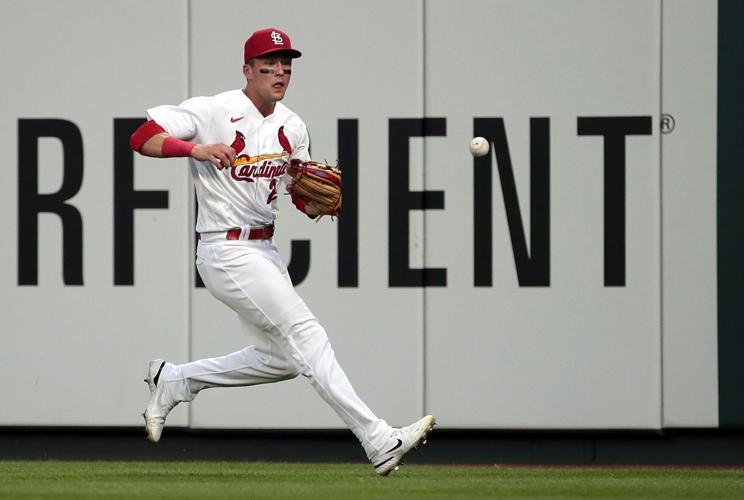 Left-hander Jose Quintana, one of two starting pitchers acquired by the Cardinals at the early August trading deadline, worked a fifth consecutive start of five innings or fewer on Tuesday night. But this five-inning stint was highly effective as he struck out five, walked no one and gave up just one run to the Washington Nationals.

The Cardinals’ crack late-inning bullpen took it from there to nail down a 4-1 win at Busch Stadium over the pesky Nationals, who had entered the game with three consecutive victories over the New York Mets and Cardinals.

Quintana has made seven starts for the Cardinals since coming from the Pittsburgh Pirates, whom he will face this weekend in Pittsburgh. The Cardinals are 6-1 in those starts and Quintana, though he has gone six innings only twice, hasn’t given up more than two earned runs in any of the games.

Jordan Hicks knocked off his fifth successive scoreless performance, working two scoreless innings and fanning one batter on a 100 mile an hour fastball.

Giovanny Gallegos and Ryan Helsley, who entered to a striking light show, finished up on a night when struggling Nolan Gorman and Brendan Donovan provided much of the offense.

Gorman, who had been 1 for 16 with nine strikeouts, cracked his 14th home run and also had a run-scoring double. Donovan hit his third homer —first since June 26 — after having been 0 for 12.

The Cardinals fans who remained were hoping for one more home run. Albert Pujols pinch hit for Donovan against left-hander Jake McGee in the eighth. But Pujols flied to left field. He remains at 695 career homers.

Tuesday’s win ensured that the Cardinals would not lose two games in succession for the first time since late July.

It was the 80th win of the season for the Cardinals, who have won 27 of their past 35 games and they have an 8 1/2 lead over chasing Milwaukee in the National League Central Division.

After whitewashing the Cardinals 6-0 on Monday, the Nationals grabbed the first lead on Tuesday. Luis Garcia doubled to right with one out in the second against Quintana and scored on a two-out single to right by former Cardinals farmhand Ildemaro Vargas.

Soft-tossing Paolo Espino, who is 0-7, blanked the Cardinals on one infield hit for the first three innings. He was throwing his best fastball at 89 mph and his curveball at 70.

Donovan ends drought — his and the team’s

Donovan, giving Nolan Arenado a night off from the field, accounted for the Cardinals’ first run of the series with a 403-foot drive to right center to lead off the St. Louis fourth. Donovan’s homer, off an 89 mph fastball, tied the score at 1-1.

But the Cardinals weren’t finished with this inning. Arenado looped a single to left center and went to third as Corey Dickerson, collecting his second hit, served a double into the left-field corner.

Tyler O’Neill’s sacrifice fly gave the Cardinals their first edge of the series. Gorman’s double off the right-center-field fence made it 3-1.

Gorman greeted former Cardinal Steve Cishek with his homer into the Cardinals’ bullpen in the seventh. The Cardinals’ run differential over their opponents is 135, third-best in the league.

They are 11-2 in games after they have been shut out.

Cardinals notebook: Nolan Gorman, who has made strides on defense, explodes at bat

Cardinals, who haven’t lost twice in succession in six weeks, march on, inexorably

Pitching has been the key, and there may be more at Memphis in Dakota Hudson.

Cardinals first baseman Paul Goldschmidt greets national anthem singers as he walks to the field for warmups against the Nationals on Tuesday, Sept. 6, 2022, at Busch Stadium.