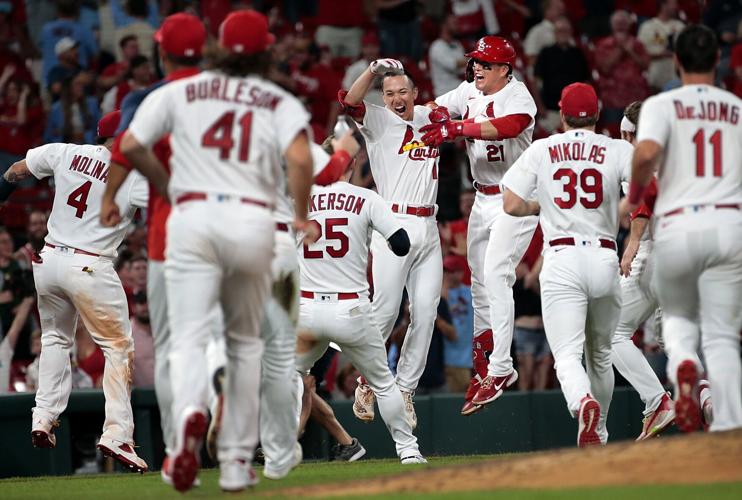 The Cardinals' Tommy Edman is mobbed after he hit a walk-off double to win the game 6-5 against the Nationals on Wednesday, Sept. 7, 2022, at Busch Stadium. 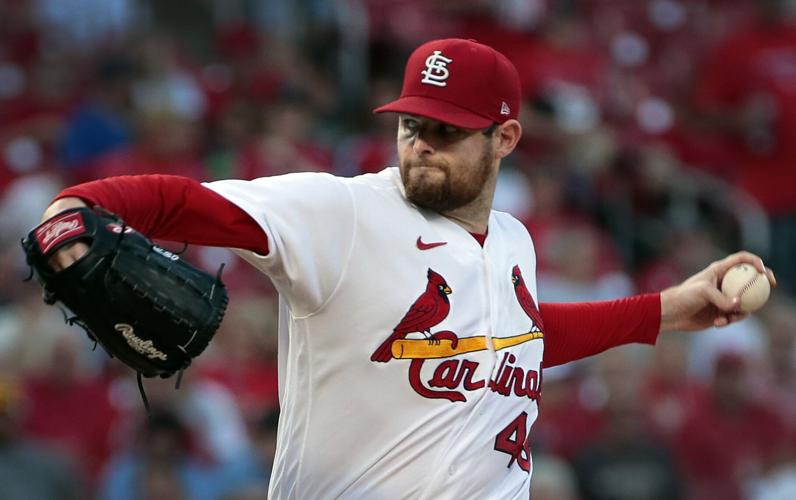 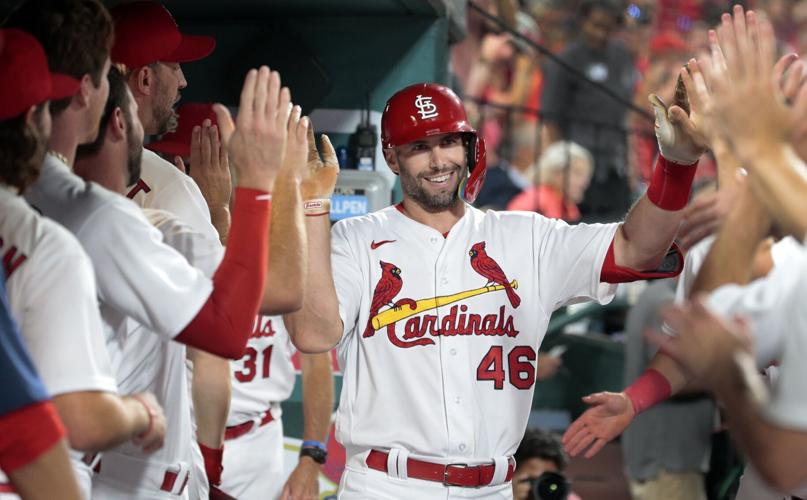 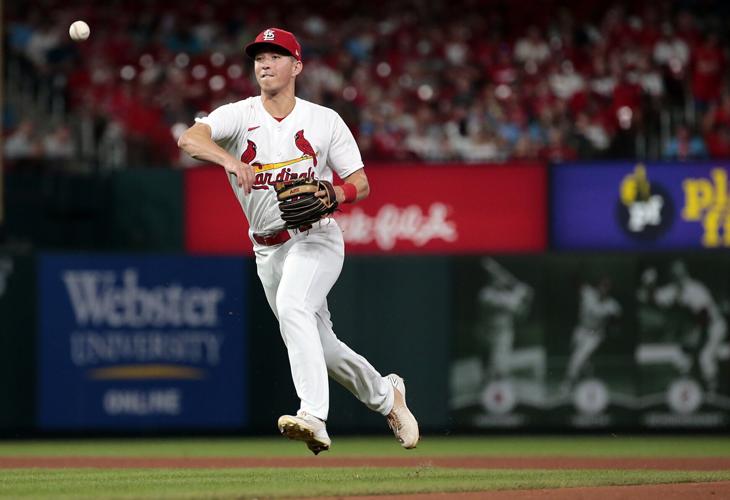 Cardinals infielder Tommy Edman throws to get Nationals batter Luis Garcia out to end the fourth inning on Wednesday, Sept. 7, 2022 at Busch Stadium. 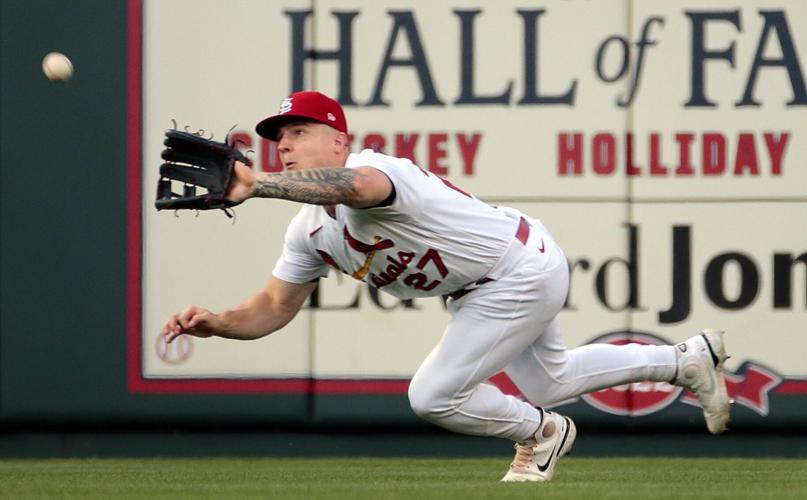 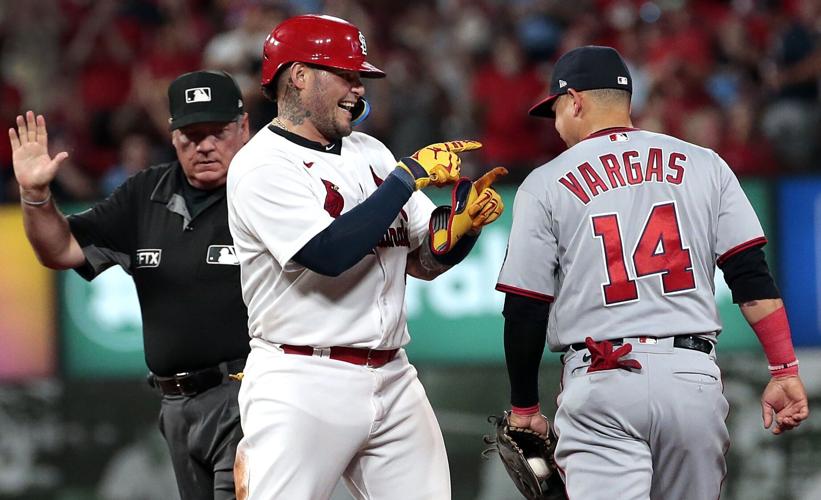 St. Louis Cardinals Yadier Molina hits a double in the fifth inning with time for some ribbing for Washington Nationals Ildemaro Vargas on Wednesday, Sept. 7, 2022 at Busch Stadium. Photo by Robert Cohen, rcohen@post-dispatch.com 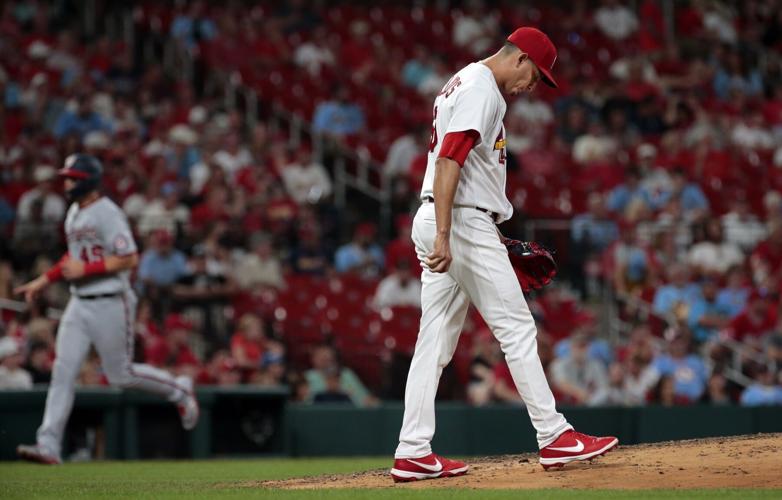 St. Louis Cardinals pitcher Giovanny Gallegos heads back to the mound after giving up a two-run home run in the eighth inning to Luke Voit of the Washington Nationals on Wednesday, Sept. 7, 2022 at Busch Stadium. Joey Meneses scores. Photo by Robert Cohen, rcohen@post-dispatch.com

The trouble the Cardinals invited by waiting to generate any sustained offense Wednesday night and helping their opponents along with some misplays was giving the team with the worst record in the majors a chance to build a lead.

They still had enough to overcome it.

Absent offensively for eight innings and momentary ugly in the eighth inning, the Cardinals stirred in the ninth for five runs to steal a 6-5 walk-off win against the last-place Washington Nationals. Tommy Edman drilled a 98-mph sinker for a double that carried over the reach of the Nats’ left fielder and allowed two runs to score and flip a game that seemed destined to be a dud. The Cardinals scored three runs in the ninth inning against Nats right-hander Kyle Finnegan with two outs.

The rally was kept alive by Yadier Molina’s RBI single with two runs that put the tying run at second base and the go-ahead run at first. Rookie Ben DeLuzio replaced Molina at first and sped home on Edman’s double for the Cardinals’ seventh walk-off win of the season.

In another superb start, Cardinals lefty Jordan Montgomery spent all of his 6 2/3 innings preserving a scoreless tie or protecting a one-run lead, right up until his final pitch. Washington hit that 98th pitch for a game-tying triple to chase the lefty from his start. The Nationals then spun three Cardinals’ miscues into four runs to pull away and create a cushion that was not tested until the bottom of the ninth. St. Louis native and former Cardinal Luke Voit’s 424-foot moonshot came in the middle of a four-run rally that pushed the Nats to the lead they lost in the ninth.

When the inning started, the Cardinals had more misplays than runs, more missed opportunities than rallies, and had only Paul Goldschmidt’s solo homer on the board.

They were on the brink of a second loss this week to Washington by scoring a run or less.

The first three Cardinals of the ninth reached base, and Nolan Arenado’s RBI double down the right-field line doubled the Cardinals’ runs and brought the tying runner to the plate with no outs. Tyler O’Neill worked a key walk that kept the inning in motion. That spark proved worth the wait.

By the time the eighth inning was over and the Nationals had four runs and a hearty lead, the scoreboard would show that the Cardinals had yet to commit an error, officially.

A series of misplays in the top of the eighth inning led directly to Washington’s four-run rally that broke a tie. In the inning, a groundball glanced off Nolan Gorman’s glove. A wild pitch put a runner in scoring position. And a hesitant throw from right field meant that runner had ample chance to wheel around third and score. Three mistakes, not one of them an error in the scorebook, became three of the Nationals’ four runs.

With a runner at second base, the play that broke the inning open could have been an infield single. A grounder by Joey Meneses found rookie second baseman Gorman in shallow right field. If Gorman got the hop cleanly, Meneses might still have beat it out for a single. But a steady glove from Gorman would have kept the runner from scoring. Instead, Gorman did not get a grip on the ball and it clipped his glove. Riley Adams had time to score from third on the RBI single off Giovanny Gallegos and break the 1-1 tie.

Neither were the Cardinals’ misplays.

Rookie Zack Thompson, in relief of Gallegos, skipped a wild pitch that allowed Nelson Cruz to advance to second base. That put him in scoring position for Luis Garcia’s single to right field. When outfielder Lars Nootbaar didn’t keep control of the ball as he readied to make a throw, Cruz came home without a challenge. That was the Nats’ fifth run.

For one of the rare instances in baseball, the Cardinals wished the ball Cesar Hernandez hit in the seventh inning actually had traveled a foot or two farther.

Montgomery had just regained control of the inning by striking out Luis Garcia with an off-speed pitch at the lower corner of the strike zone. Garcia couldn’t reach the pitch and down he went for the second out of the inning. Nelson Cruz remained planted at first as the potential tying run, and the Cardinals’ lefty starter had an avenue toward the eighth inning. First, he had to get past Hernandez.

The Nationals’ switch-hitting infielder tagged a 94 mph sinker and lifted it toward the Cardinals’ bullpen in right field. The ball bounded off the warning track and toward the top of the right-field wall. If the ball went over, Cruz would have to remain at third base on the rulebook double. The ball came just shy of doing so, clipping the wall and caroming high and back toward the field of play. That hang time gave Cruz and Hernandez plenty of time to stretch for the extra base.

Hernandez’s fourth triple of the season scored Cruz to knot the game, 1-1. On his 98th and final pitch of the game, Montgomery did not get the benefit of the bounce, just bounced.

In the 11 games since two home runs at Wrigley Field elevated Goldschmidt into the lead for two of the three Triple Crown jewels, the Cardinals’ first baseman had cooled, relatively speaking. He wryly asked reporters in Cincinnati why they had questions for him after he didn’t do much in a three-game visit, and over the previous two weeks he hit .211 and had one home run, his 34th.

Despite the brief dip, Goldschmidt remained in range of the National League’s first Triple Crown since the Gas House Gang. Coming into the game, his 107 RBIs continued to lead the NL; his .329 batting average was the highest in the majors; and his 34 homers trailed NL leader Kyle Schwarber by two.

Goldschmidt hit his third homer of the season into Busch Stadium’s Big Mac Land to lead off the fourth inning and break the scoreless tie Wednesday night. Goldschmidt’s 35th home run of the season gave him a new best as a Cardinal, put him one shy of tying his career high, and provided the Cardinals a 1-0 lead. It was short-lived.

The joke around the Cardinals’ dugout these days is every hit by Molina or Albert Pujols means a baseball has to be collected, recorded, and slapped with an authentication sticker because of the history already attached to it.

The mementoes range from the legendary, such as leaping past Stan Musial one day, to more nuanced moments, especially those specific to the full-time catchers like Molina. He had three singles in a game late last month to move ahead of Yogi Berra in career hits at catcher.

Molina’s one-out double in the fifth inning did not generate any runs for the Cardinals, but it did continue his ascent in two categories close to home, quite literally. The double to the right-center gap was Molina’s 408th of his career, vaulting him ahead of former teammate A.J. Pierzynski and alone in fourth place all-time among everyday catchers.

The double was also Molina’s 1,008th base hit at Busch III.

He is already the all-time leader in hits at the downtown ballpark, and with 1,008 he tied Joey Votto and Frank White for the most hits at a home ballpark. Cincinnati’s Votto has 1,008 at Great American Ball Park, but will not add to that total this season due to shoulder surgery. Kansas City great White had 1,008 hits at Kauffman Stadium.

It was difficult to tell who said it first and it might have been five or six different teammates at once, because that’s how innings usually …

Ten Hochman: Can Albert Pujols tie a Yankee legend on the same date Mark McGwire did?

Yadier Molina and Adam Wainwright are set to tie the MLB record for starts as batterymates on Thursday afternoon.

The Cardinals' Tommy Edman is mobbed after he hit a walk-off double to win the game 6-5 against the Nationals on Wednesday, Sept. 7, 2022, at Busch Stadium.

Cardinals infielder Tommy Edman throws to get Nationals batter Luis Garcia out to end the fourth inning on Wednesday, Sept. 7, 2022 at Busch Stadium.

St. Louis Cardinals Yadier Molina hits a double in the fifth inning with time for some ribbing for Washington Nationals Ildemaro Vargas on Wednesday, Sept. 7, 2022 at Busch Stadium. Photo by Robert Cohen, rcohen@post-dispatch.com

St. Louis Cardinals pitcher Giovanny Gallegos heads back to the mound after giving up a two-run home run in the eighth inning to Luke Voit of the Washington Nationals on Wednesday, Sept. 7, 2022 at Busch Stadium. Joey Meneses scores. Photo by Robert Cohen, rcohen@post-dispatch.com