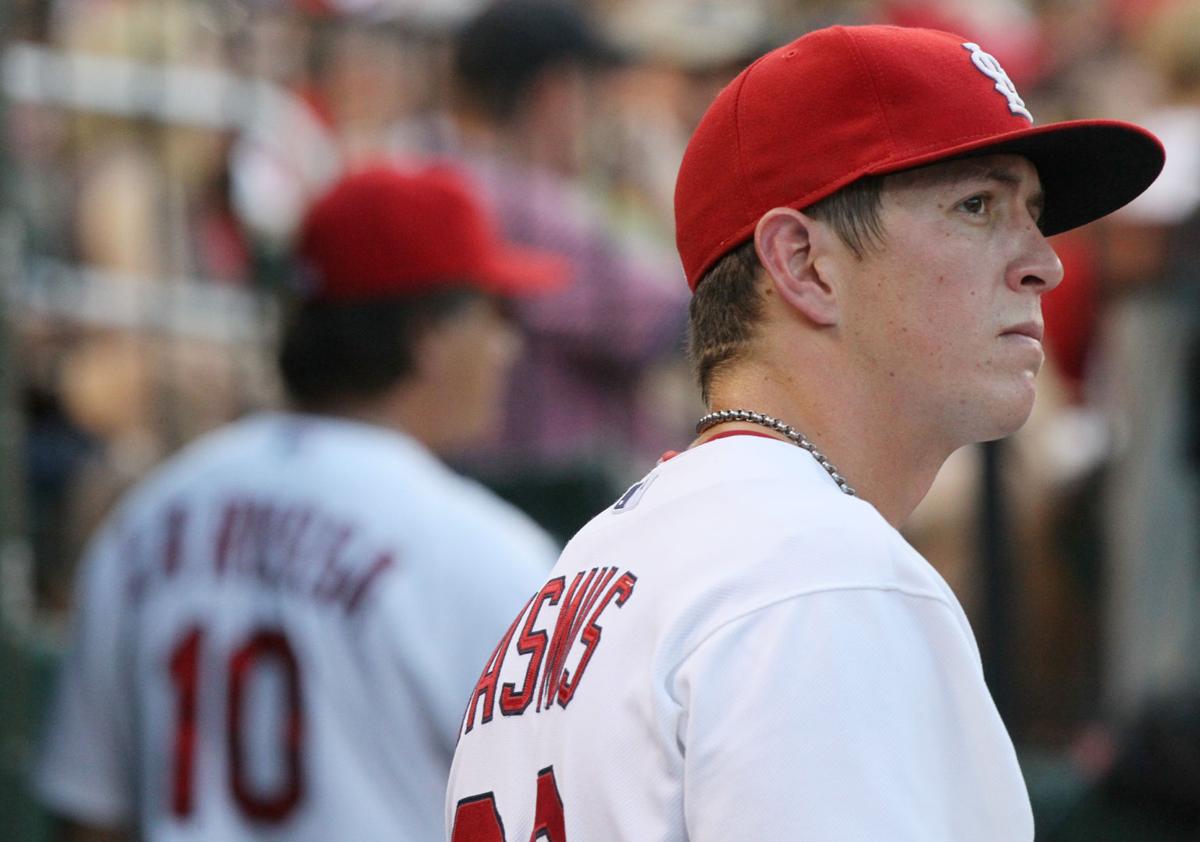 July 25, 2011 -- Cardinals' Colby Rasmus in the dugout during a game between the St. Louis Cardinals and the Houston Astros at Busch Stadium in St. Louis, Mo. In background is Cardinals manager Tony La Russa. Chris Lee clee@post-dispatch.com 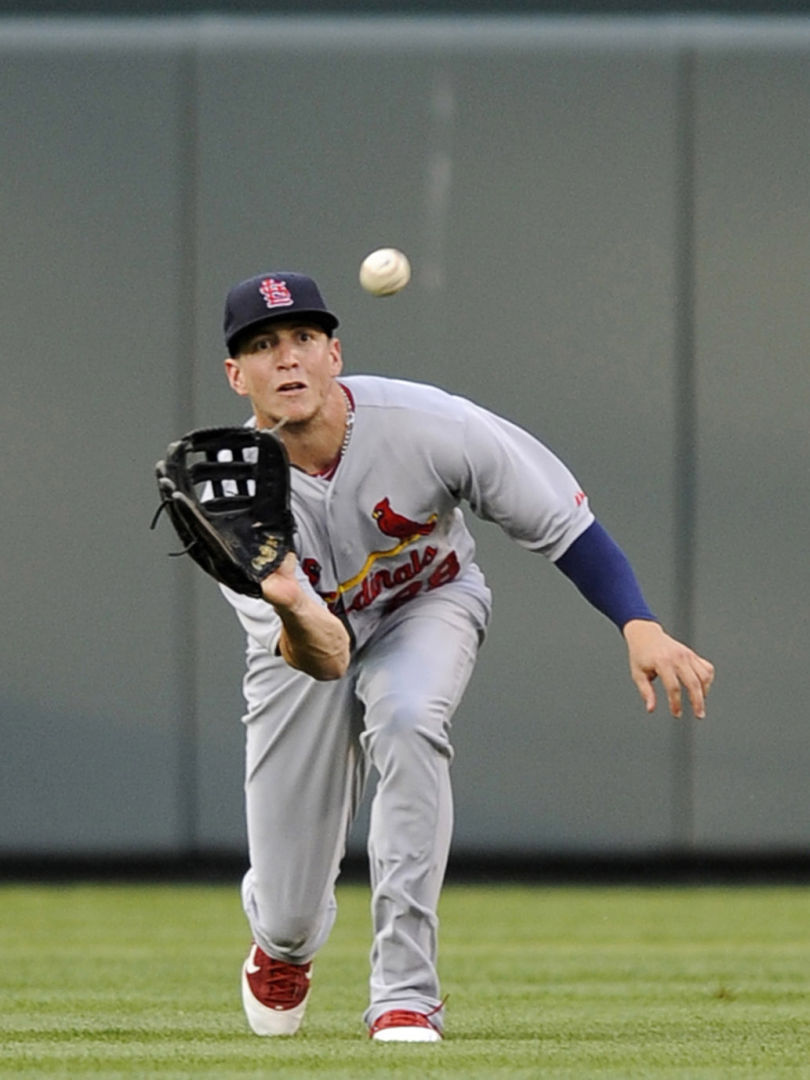 FILE - In this June 29, 2011, file photo, St. Louis Cardinals center fielder Colby Rasmus bends to catch a fly ball by Baltimore Orioles' Blake Davis during the third inning of an interleague baseball game in Baltimore. The Cardinals sent Rasmus and two relievers on Wednesday, July 27, 2011, to Toronto, sacrificing a starting outfielder to get more pitching for the second straight year near the trade deadline. (AP Photo/Nick Wass, File) 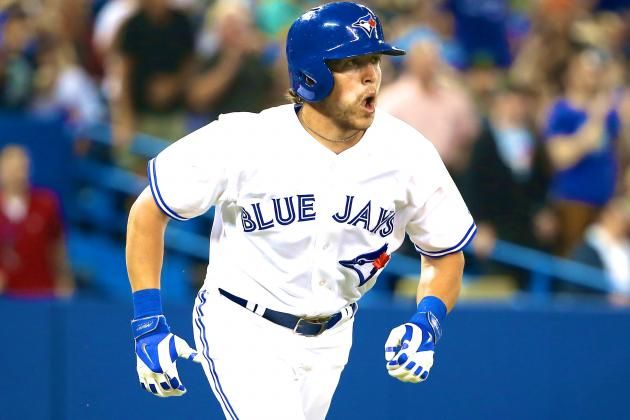 Ex-Cardinal Colby Rasmus, after a stay in Toronto, will play center field for the Houston Astros in 2015. (Bleacher Report photo)

JUPITER, FLA. • Minutes apart, they made their appearances at Roger Dean Stadium Friday. First, Willie McGee, one of the greatest and most popular Cardinals center fielders of all time. Second, Colby Rasmus, who was accorded future greatness but who never achieved that and never really caught on with a portion of the fans. And certainly not with his manager, Tony La Russa.

McGee had arrived in camp as a Cardinals instructor. Rasmus was in camp as a visitor, playing left field for the Houston Astros, with whom he signed a one-year, $8 million contract as a free agent after spending the last 3½ seasons in Toronto. Rasmus, playing against the Cardinals for the first time in his career, went nothing for two in a 5-2 Cardinals win.

Rasmus, who hit just .225 for Toronto last year, albeit with 18 homers, has a Cardinals World Series ring. But he didn’t finish the victorious 2011 season with them, having been dealt to Toronto in late July for pitching help.

La Russa had become frustrated with Rasmus, whom he deemed not to have bought into the process, and their relationship was cool, if not icy. Rasmus, then 24, thought La Russa had robbed him of having fun playing baseball.

“Me being a young player, I just didn’t think I was fitting into what Tony was wanting to do and that was kind of a battle,” said Rasmus. “There were some things that were a little over my head that I didn’t understand.”

Rasmus takes some responsibility for his problems with the Cardinals, one of which was his taking hitting instruction during the season, sometimes at a St. Louis area high school, from his father, Tony, who was his coach as a youth in Alabama.

“Hindsight is 20-20,” said Rasmus. “If I would go back, I would act a little different. I would have more of an understanding of why (La Russa) was the way he was.

Rasmus said he and his father have agreed that the latter shouldn’t be around as much anymore.

“My dad never wanted any will on anybody,” Rasmus said. “He was my coach since I was little bitty, and he knew me better than anybody, but the way we went about it, I guess, was the wrong way.

“Maybe we could have been a little more secretive. I just wanted to play well and thought they wouldn’t care as long as I was trying to produce and help the team. There was a month when I hit nine home runs and they tell me I can’t do (the extra-curricular batting practice) anymore and then I started struggling again.

“I didn’t really understand that dynamic. But, looking back, I get it. (La Russa) was trying to protect his guys, and that’s what it’s all about.”

Asked if he might still be with the Cardinals if Mike Matheny had been managing four years ago, Rasmus paused, smiled and said, “Probably so. Looking at the Cardinals and how they play now, it looks like they’re having a little more fun, a little more pizzazz. It’s not so uptight. That’s just me, though.

“You can’t take anything away from (La Russa). He did his job. He did what he was supposed to do.”

Rasmus battled injuries with Toronto, with a strained side and hamstring strains in both legs besides a hip injury.

“I’m getting a little older now (28),” said Rasmus. “I’ve been taking a beating on this body. I’m a lot older than I used to be. Playing on that turf in Toronto was pretty tough. It has a nice slab of concrete underneath and I was diving on it. I didn’t baby myself and take it easy.”

Rasmus, who looks to take on a veteran’s role with the young Astros, hit .225 or under twice in three full seasons at Toronto. He blames his low average last year for too many line drive outs hit into defensive shifts and too many first-pitch strikes he didn’t swing at.

“That,” said Rasmus, “is not a recipe for a high average.”

Rasmus admitted that sometimes he doesn’t have fun in the game anymore and that he didn’t plan to play 10 more years or even five. He said he wanted to play this season and three more and then retire to his newly purchased cattle ranch in Alabama, where he has a wife and two young daughters and where the deer hunting and fishing are abundant.

But Rasmus said he was at peace now because he said found Jesus Christ last year.

“I was lost for a while,” he said. “I can remember (former Cardinal) Lance Berkman sitting next to me on the bench, talking about Jesus Christ and I didn’t really understand it. At the time, my family hadn’t really bought into that.

“Looking back, I see Albert (Pujols) and Lance and (Matt) Holliday and (Adam) Wainwright and I see this aura, this presence they had about them. I always wondered how they got that. Now I see what it’s about and it’s changed my life big-time.

“I focus on my family and I don’t get caught up in all that stuff like I used to. My time in St. Louis ... the fans were always good to me and it tore me up a little bit when I didn’t play well, so I went through some rough times.

“Surrendering my life to the Lord helped me relieve those demons, so to speak.”

Rasmus, whose best season for the Cardinals was 2010 when he batted .276 with 23 homers, played only 2½ seasons with them, so his legacy is modest after being a first-round pick in 2005.

“I enjoyed my time there,” Rasmus said. “But I didn’t play as well as I should have played, so I don’t see myself as a Cardinal great or something like that.

“I was just another guy who played baseball. I tried. I played hard.”

Rasmus will not be another Willie McGee. But nobody else will be, either.

On the Cards' first actual road trip of spring, lefty Jaime Garcia gets his start  and some of the youngest big leaguers will back him.

Heyward is at a crossroads

Matheny has measured praise for Garcia

After experiencing their lowest HR total since 1992 last season, the Cardinals seem capable of delivering more danger and power in 2015.

Gonzales throws two scoreless innings in 5-2 victory, admits to having 'nerves going' before finding a feel in first spring start.

Young righthander will get two starts before Waino and Lackey will get their first.

Martinez jumps ahead in race for rotation spot

Bernie: Will Peralta maintain or regress in '15?

In first year with the Cards, Jhonny Peralta may have been MLB's best all-around shortstop. Can he do it again, or will the aging curve get him?

The uncanny patience of Ty Kelly

Cards new switch-hitting utility infielder has a reputation for knowing the strike zone and swinging at fewer pitches than anyone. Why is he so picky?

Pham makes most of chance to impress

Cards notes • Outfielder collects four hits as he seeks a long-delayed spot in the major leagues.

July 25, 2011 -- Cardinals' Colby Rasmus in the dugout during a game between the St. Louis Cardinals and the Houston Astros at Busch Stadium in St. Louis, Mo. In background is Cardinals manager Tony La Russa. Chris Lee clee@post-dispatch.com

FILE - In this June 29, 2011, file photo, St. Louis Cardinals center fielder Colby Rasmus bends to catch a fly ball by Baltimore Orioles' Blake Davis during the third inning of an interleague baseball game in Baltimore. The Cardinals sent Rasmus and two relievers on Wednesday, July 27, 2011, to Toronto, sacrificing a starting outfielder to get more pitching for the second straight year near the trade deadline. (AP Photo/Nick Wass, File)

Ex-Cardinal Colby Rasmus, after a stay in Toronto, will play center field for the Houston Astros in 2015. (Bleacher Report photo)