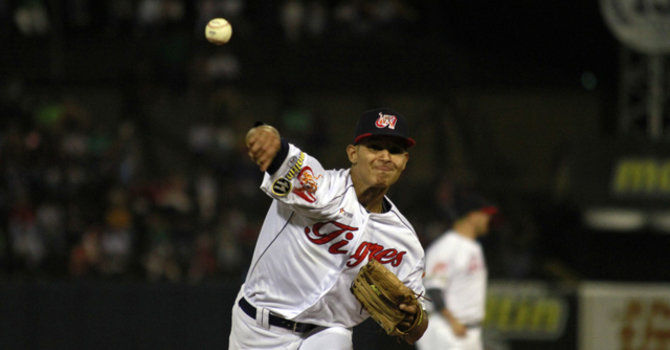 Prospect Alvaro Seijas signs a contract with the Cardinals in 2015. At left is Moises Rodriguez, Cardinals director of international operations. At right is area scout Jose Gonzalez Maestre. 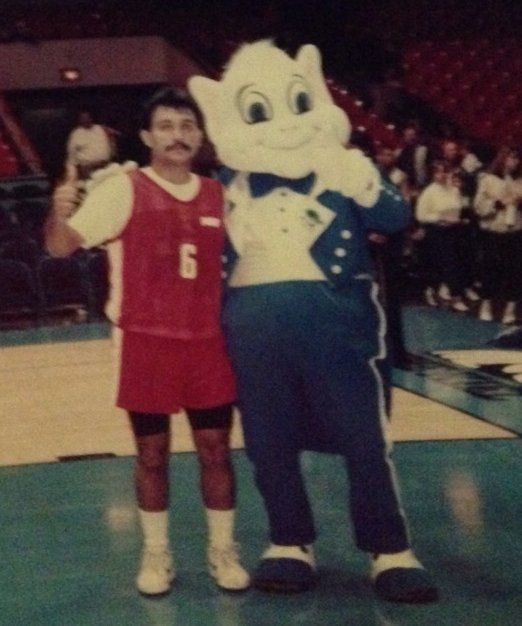 Alvaro Seijas' father, a former professional basketball player, is pictured with the Billiken mascot during a trip to play an exhibition game against St. Louis University.

On Thursday night, hours after their 16-year-old son turned pro, the Seijas family cranked up the music, cooked up some pork, opened up the garage of their home in Venezuela, set up some tables and gave Cardinals executive Moises Rodriguez one more chance to do a little scouting.

While young Alvaro Seijas, the righthander the Cardinals signed that afternoon, danced with his aunts, Rodriguez eyed the uncles.

He met three, all of them tall and one standing above the others.

Those genes would help the nephew reach anticipated heights.

“That’s something you like to see, right?” asked Rodriguez, the Cardinals’ director of international operations. “Any piece of information that you can get to weigh in as part of your decision is important to get. We’re talking about 16-year-old players. You don’t have many games. You’re projecting a lot. If the uncles are tall, that can be a small piece of the puzzle.”

The Cardinals made an aggressive and expensive splash when the international amateur market, called the “July 2” market, opened Thursday. They did so by signing the pitcher considered by many to be the best available in the market and one of the best teen prospects, at any position, in his country. Seijas (pronounced “say-haas”) received a bonus of $762,500, one of the largest ever given by the Cardinals.

With switch-hitting shortstop Raffy Ozuna, of the Dominican Republic, receiving $600,000, the Cardinals committed more than half their $2,038,200 bonus cap to two players — neither of whom has reached his 17th birthday.

They signed a total of five teens Thursday, but have room remaining to pursue other Latin American talents through next June, when this signing period ends.

The Cardinals’ willingness to offer the size of bonus they rarely have reveals the organization’s evolving presence in the region, a spending strategy, and the situation for Venezuela’s talent. The Cardinals saw Seijas pitch in three countries and authored a deep evaluation that drew from scouts, lineage, and a few YouTube clips. Initially, they believed he would command a bonus beyond their interest. But as the Venezuelan market defined itself, the Cardinals recognized they had an opportunity they wouldn’t have in a draft.

“We asked ourselves if we could get a pitcher of his high level in an international draft, picking (in the lower third) as we would,” said Rodriguez, speaking Friday from his hotel room in Venezuela a day after signing Seijas in person. “We couldn’t. So we decided to be aggressive with our offer. No. 1, you’re hoping you’re signing a starting pitcher. You project what he’ll be in his major-league prime. With a 15-, 16-year-old kid that’s a difficult task. His present ability stood out.”

Seijas, a native of Maracay, Venezuela, has trained at former big leaguer Carlos Guillen’s Academie de Beisbol in his hometown. That has given him access to coaches and strength and conditioning programs.

The Cardinals started following him late last summer after he “really opened our eyes,” Rodriguez explained. He’s the son of a former professional basketball player in Venezuela, and his mother played volleyball. Seijas showed the kind of athleticism the Cardinals prioritize, even for pitchers, because they feel that as a teen develops it will be the athleticism and quick-twitch agility that accepts instruction and hastens adjustments at each level.

The 6-foot-1, 175-pound Seijas throws consistently in the low 90 mph range with his fastball, and it has touched 94 mph and will rise from there. With that potential power, he also has a tightly spinning breaking ball that already has been a strikeout pitch for him as he learns to command it.

“Young kids who can spin it are very attractive,” Rodriguez said.

The Cardinals had at least one scout see Seijas in the Dominican when he threw two scoreless innings in a Major League Baseball international showcase. He visited North Carolina, and the Cardinals had a scout there, too. Matt Slater, the Cardinals’ director of player personnel, saw Seijas three times. Rodriguez visited Venezuela often, and area scout Jose Gonzalez Maestre handled the home visits and interviews that helped the team shape their view of Seijas’ potential.

Such mining for information happens constantly and for dozens of players the team does not end up signing from countries all over the Americas. The Cardinals saw Brian Pirela, a righthanded pitcher from Venezuela signed Thursday in Colombia, where he was working with former big-leaguer Orlando Cabrera at an academy. The Cardinals first had a scouting report on Ozuna from Rodny Jimenez, a Dominican-based scout. Two months after he steered the Cardinals toward Ozuna, Jimenez died suddenly, though his view of the young switch-hitting infielder guided the team through to the signing Thursday.

In December, two days before Christmas, a 16-year-old Seijas made his Venezuelan Winter League debut. He faced major-league outfielder Endy Chavez and allowed three runs while recording one out. Rodriguez and other Cardinals scouts got to see the debut, the over-the-top delivery, and the lithe mechanics on YouTube. Rodriguez also saw something else there — an interview with Seijas from the dugout after his outing.

“So poised. So calm,” Rodriguez said. “Has that quiet competitor.”

Ben Badler, who covers the international market for Baseball America, wrote last month that Venezuela was the area “where bargains can be had” partially because the country “has also always been challenging to scout and has only grown worse in recent years.”

A profound recession has swallowed Venezuela, and the country has the highest inflation rate in the Americas. There have been instances of violence as access to basic goods has become choked. In February, Major League Baseball issued a travel warning to its clubs for Venezuela, and by March, just as the July 2 market warmed, visas were required for travel there. Rodriguez got his in March and was able to be in Venezuela in April to negotiate with Seijas.

Rodriguez played down the Cardinals’ effort to scout and reach Venezuela as a big edge because Seijas played elsewhere.

Badler suggested that the situation did suppress the bonuses Venezuelan talents could command, even the pitcher he ranked the 10th-best talent available at any position.

A WORK IN PROGRESS

The Cardinals have worked over the past decade to have their international scouting dovetail with their amateur scouting. The same scale the Cardinals use to assign value for domestic high school and college kids is the one they try to use for international players, depending on the available data. The Cardinals long believed that they were better positioned to sign mid-range bonus players, such as the late Oscar Taveras ($145,000) or rising shortstop prospect Edmundo Sosa ($425,000).

They learned from the busts. The Cardinals signed Dominican third baseman Robert De La Cruz for $1.1 million in 2008, advertising the deal as an indication they would be a player in the market.

De La Cruz was released five years later without taking an at-bat higher than Low-A. A year later the Cardinals agreed to a $3.1-million bonus for outfielder Wagner Mateo, but voided it when he couldn’t pass the physical because of concerns about his vision.

The Cardinals reset their own sights.

In the years that followed they went big for Carlos Martinez ($1.5 million) but he was older, more clearly defined than the 16-year-old arms.

And, in 2012 they outbid Houston and Kansas for Alex Reyes, signing him for $950,000. Reyes, the Cardinals’ selection for the Futures Game, was 18 and had grown up in New Jersey before moving to the Dominican.

Adding to and even strengthening the Cardinals’ approach was baseball’s addition of a spending cap for international amateurs. That allowed them to stay with mid-range bonuses and not exceed the cap while other teams did.

This summer five teams could not sign players for more than a $300,000 bonus because they overspent their 2014-2015 cap. It is a two-year penalty, so a year from now a third of the major-leagues clubs may be limited to $300,000 bonuses. That takes those teams out of play for next year’s Seijas. Switch-hitting infielder Kevin Maitan, a 15-year-old Venezuelan, is the prize of the next class. “A phenom,” according to reports. The Cardinals already have signed players from the academy where he plays. They have scouted him since he was 13.

Without being specific, general manager John Mozeliak allowed that if there’s a time the Cardinals might push beyond their cap “and play that game, it makes more sense next year.”

This year, they have their big bonus additions.

Sunday is the 204th anniversary of Venezuela’s independence, a national holiday. Seijas, a few days removed from the signing party, will leave his athletic father and tall uncles to travel to the Cardinals’ facility in the Dominican. He’ll be eligible to play in the system at the Dominican Summer League or Gulf Coast League or higher next summer. Patience is the rule now. The Cards wait to see how their investment matures.

He’s got a ways to grow.

“July 2 pitchers are very risky category, one of the riskiest,” Rodriguez said. “You’re taking a 16-year-old arm and asking where are they going to be in 10 years — where is he going to be in the prime of his career? That’s risky. This is a substantial investment for us in a July 2 arm. We normally are in the market for the older (teen) pitchers, normally looking to spend less.

“That should say a lot about what we think of him.”

Cards get their first hit in the seventh inning and go on for a 2-0 lead, but a rain delay has caused some muddiness at Wrigley.

With Martinez in 'final vote,' Cards could have six All-Stars

Molina selected by players for his seventh visit to All-Star Game. First-timers Rosenthal and Wacha also get nod for NL's pitching staff.

Hummel: Redbirds figure to be stars of NL

Game blog • Cardinals closer Trevor Rosenthal records his 24th save of the year.

The Cardinals began the week with a .680 winning percentage, only to stall and lose four straight games. We need perspective. They need offense.

Young Cardinals starter has changed his demeanor on the mound.

Prospect Alvaro Seijas signs a contract with the Cardinals in 2015. At left is Moises Rodriguez, Cardinals director of international operations. At right is area scout Jose Gonzalez Maestre.

Alvaro Seijas' father, a former professional basketball player, is pictured with the Billiken mascot during a trip to play an exhibition game against St. Louis University.