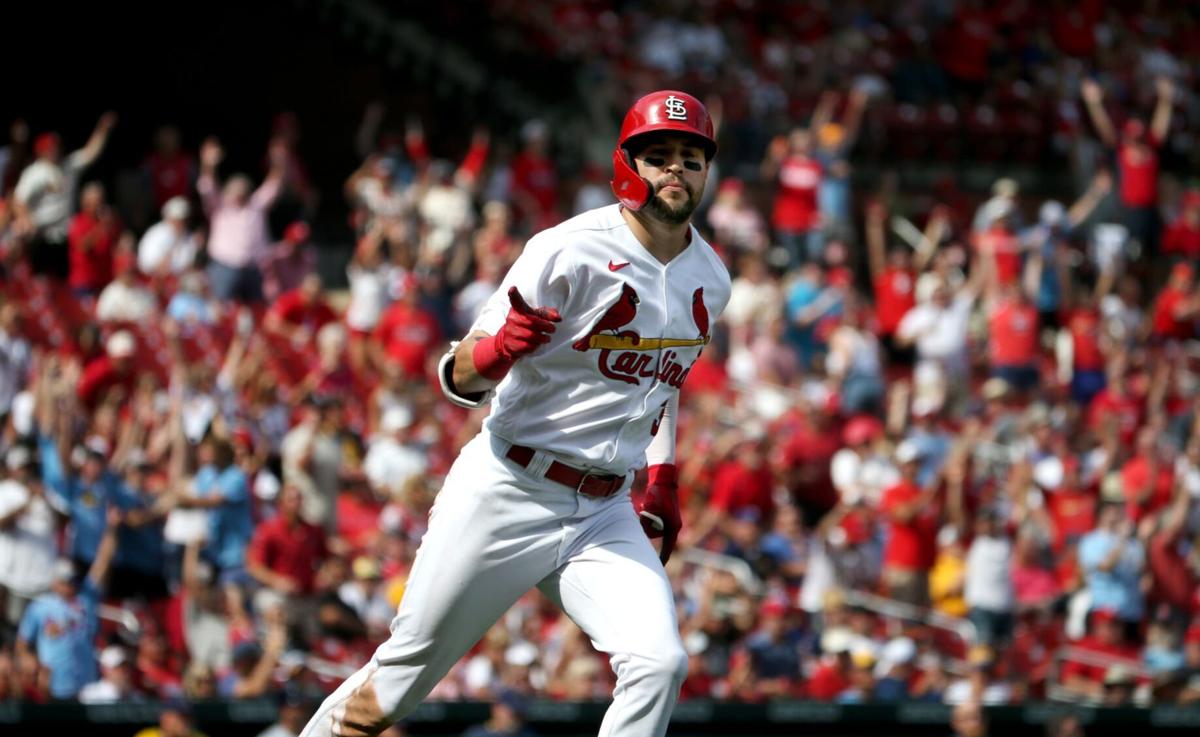 St. Louis Cardinals Dylan Carlson (3) points toward the dugout after hitting a two-run home run in the sixth inning of a baseball game between the St. Louis Cardinals and the Milwaukee Brewers on Thursday, Sept. 30, 2021, at Busch Stadium in St. Louis. It was Carlson's second home run of the day. Photo by Laurie Skrivan, lskrivan@post-dispatch.com 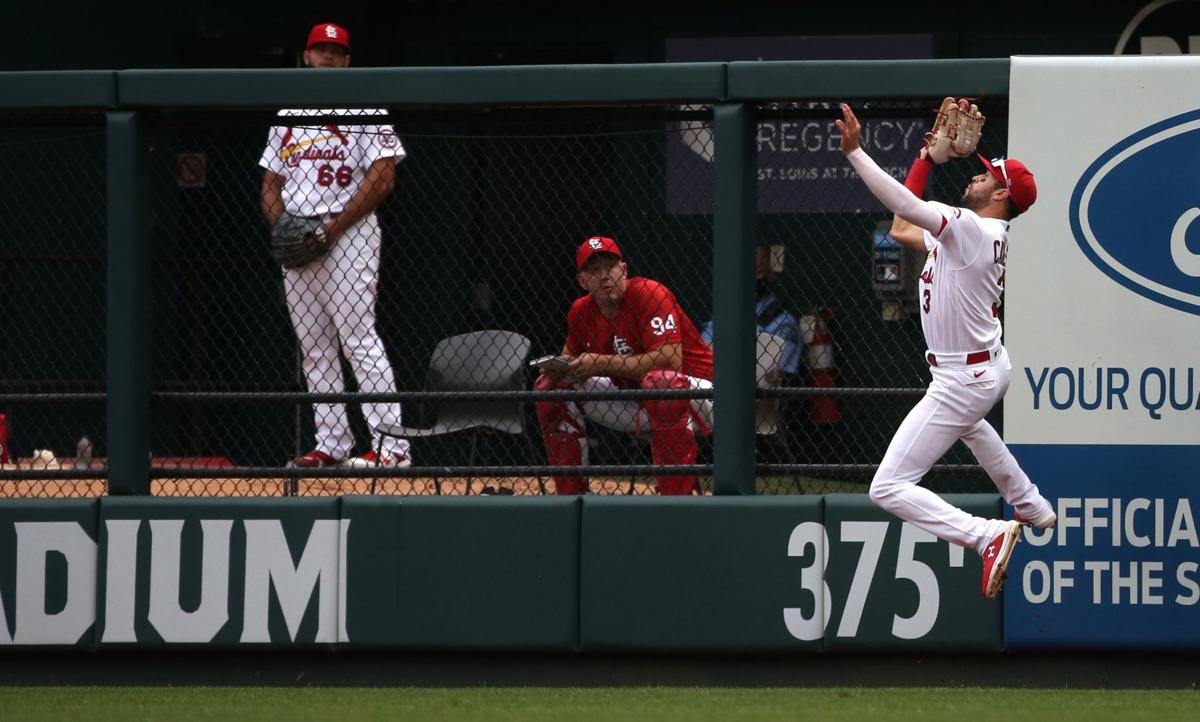 There were days in 2019 as he took the Class AA Texas League by storm to slingshot his career toward the Cardinals that Dylan Carlson would arrive at the clubhouse, read the opposing pitcher’s name, and promise teammates he was going to hit a leadoff home run.

“I don’t know if he’s told you guys this,” reliever and Class AA Springfield teammate Kodi Whitley confided Thursday. “And then he would go out and do it.”

Carlson, to date, hasn’t pulled the same trick in the majors.

He has, however, done something the Cardinals saw coming.

The youngest player on the team, playing his longest season so far, has escalated his performance, like the club, as October arrives. Carlson hit home runs from both sides of the plate and stole two hits at two different positions to rally the Cardinals twice and carry them to a 4-3 victory against Milwaukee at Busch Stadium. Carlson, a 22-year-old switch-hitter, became the first player in major-league history to hit a home run from both sides of the plate in multiple games of his rookie season, according to Elias. Both two-homer games came in the past two weeks.

Both at the end of a full schedule he’s never played and all of it on the eve of the most important month of the year.

“Talent on full display for Dylan,” manager Mike Shildt said. “First time you play in a full season it can be a challenge for a guy. Some more than others. What he does with his habits and how he’s gone about it since really (my) first observations … This guy is built for having the ability to play the game later.”

A day after the club-record winning streak stopped at 17, the Cardinals added a win at the end of one of the most remarkable Septembers in club history. Aided by Carlson’s second homer that provided the final lead, J.A. Happ, one of the midseason additions to stabilize the rotation, struck out seven in 6 1/3 innings. He earned a 10th win for the seventh consecutive full season.

The Cardinals’ three starting outfielders scored 57 of those runs.

Since Carlson’s debut in 2020, the Cardinals have cleared their roster and committed playing time in the outfield to him, Tyler O’Neill, and Harrison Bader — betting big that they would produce while players moved, like Randy Arozarena, blossomed elsewhere. September became the trio’s showcase. As a group, they hit .308 with a .603 slugging percentage and a .951 OPS. The outfield’s 24 home runs led the majors in September, and they slugged .578, far better than the next closest (Juan Soto’s Washington outfield, .509). Maybe they're fall blooms.

While O’Neill did the heavy lifting with 11 homers and an OPS greater than 1.000 in September and Bader added six September homers to a season with a golden sheen, Carlson had a less flashy, though no less steady month. With his homers and walk Thursday, he finished September with a .280 average and an .833 OPS. The NL Rookie of the Year ballot asks voters to rank the top three, and he'll receive support.

For the second time in as many years in the majors, Carlson has been on the upswing in September. Last season, that vaulted him to the cleanup spot for the playoff series against the Padres. This season, he’s benefited from that postseason baptism.

Wild ride: The words behind the 17 wins as Cardinals clinch the wild card

Happy Flight, the Rally Squirrel and the Shredder: 11 moments that defined the 2011 St. Louis Cardinals

Carlson snapped a tie game with a solo homer in the third inning off Milwaukee lefty Brett Anderson. The ball left his bat at 107 mph and traveled 408 feet to one of the hardest nooks to clear at Busch Stadium — the left-center gap. Carlson started in center to spell Bader, and in the sixth inning he had a liner right at him that appeared like it would sail over him. Carlson jumped, his back to the infield, and snagged the ball to steal extra bases from Brewers infielder Keston Hiura.

“Fortunate I was able to get my glove on it,” Carlson said.

The Brewers got four consecutive hits off Happ to open the fourth inning and pull ahead, 3-2, before Happ struck out the final two batters of the inning.

The score stayed that way until Tommy Edman greeted Brewers reliever Miguel Sanchez with a single to start the sixth. On the first pitch Carlson saw while batting from the left side on Thursday, he tagged a two-run homer, his 18th of the season. That shot left his bat at 107 mph and traveled 393 feet into the right-field seats to give the Cardinals the lead.

“He’s fun to watch when he swings it like that,” Whitley said.

Whitley pitched a snappy scoreless inning with two strikes. T. J. McFarland entered with a runner on base in the eighth to get a double play with one pitch and end the inning. After moving to right field for the late innings, Carlson then helped cinch the lead his homer created by running down a ball at the right-field wall to once again rob Hiura of leadoff extra bases.

Luis Garcia struck out both batters he faced for his second save.

“How does he help beat the other team?” Shildt said as he considered a question about Carlson. “It was on display today. Switch-hitter so you cannot really game-plan for him either way there. He’s got pop in his bat. Put that on display. He’s a smart baserunner. He continues to play excellent defense. He’s a good player with a lot of skill sets. Those are skill sets that win.”

Carlson impressed veteran minor-leaguers the day of his promotion to Class AAA Memphis when, minutes after arriving, he did not unpack, did not change out of street clothes, and went straight to a hitter’s meeting to hear about the opposing pitchers. He sits next to Nolan Arenado in the clubhouse, soaking in suggestions. He quizzes Goldschmidt. He became the first Cardinals switch-hitter to have at least two games with two homers from each side since Carlos Beltran, his favorite player. And afterward he thanked another Cardinal switch-hitter, Willie McGee, his coach.

He’s new to playing a full season, but it’s not unfamiliar to him.

He’s heard all about it from McGee and others — how the later it gets, the better to be.

“It’s a long season — never been a part of one full season like this — and I’m learning as well,” Carlson said. “We’re all playing good ball right now. It’s all translating at the right time.”

'One of the greatest Cardinals ever': Battery recharged, Wainwright says signing for 18th season was 'family' decision

Wainwright, the starter for Wednesday's wild-card game, and Cardinals finalized a one-year deal that likely doubles his salary after 17-7 season.

Molina, Sosa return to Cardinals lineup and as rain clears so does view of wild-card opponent

Meaningless in the standings, games are still meaningful for Cardinals because of large crowds expected, pitchers who they need to see, prep for wild card.

While Cardinals close out regular season in the comforts of home, chaos could unfold out west

Playoff-bound lineup backs rookie starter Woodford and then subs will come in midgame, including Carpenter for possibly his last Cardinals home game.

See the Cardinals stunning rise (and the Padres' and Mets' collapse)

See the Cardinals stunning rise (and the Padres' and Mets' collapse) at the end of the season.

St. Louis Cardinals Dylan Carlson (3) points toward the dugout after hitting a two-run home run in the sixth inning of a baseball game between the St. Louis Cardinals and the Milwaukee Brewers on Thursday, Sept. 30, 2021, at Busch Stadium in St. Louis. It was Carlson's second home run of the day. Photo by Laurie Skrivan, lskrivan@post-dispatch.com