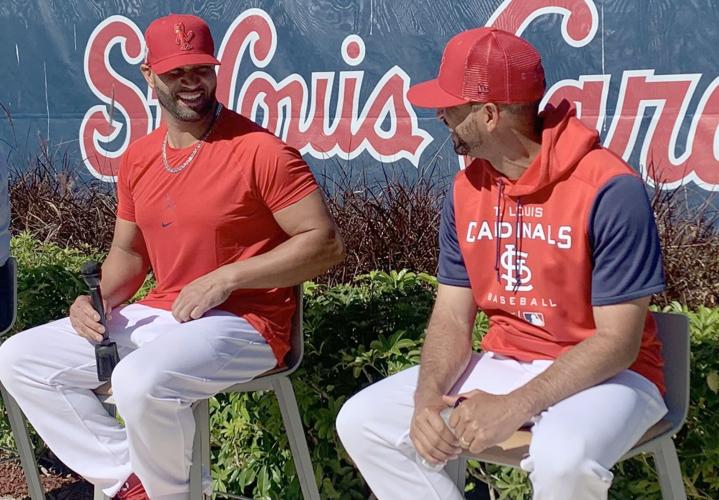 Albert Pujols is back with the Cardinals, talking Monday with manager Oliver Marmol, right, in Jupiter, Fla. 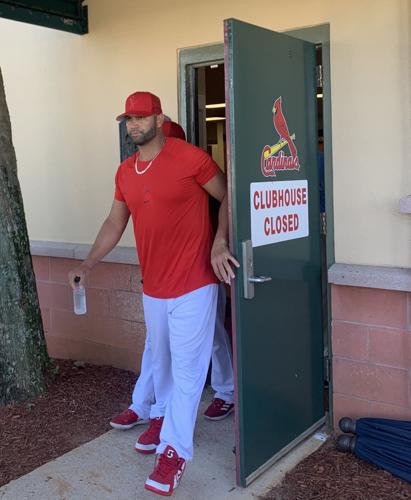 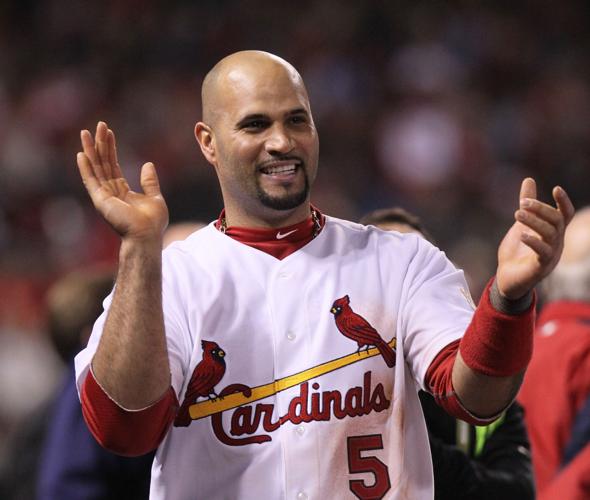 Albert Pujols celebrates after the Cardinals won Game 6 of the 2011 World Series, against the Texas Rangers, on Thursday, Oct. 27 at Busch Stadium. (Post-Dispatch photo)

JUPITER, Fla. — Back where it all began 21 springs ago, with his red No. 5 standing by, Albert Pujols grinned to avoid tears as he rejoined the Cardinals and said this is how his career will end.

The three-time MVP who will be the final player to wear his number for the Cardinals passed his physical, jarred starter Adam Wainwright from a nap for a hug, and signed a one-year contract to officially return to his first franchise Monday. He said it also will be his last season.

“This is it for me. This my last run,” Pujols said. “This is probably the last uniform I will wear in the big leagues.”

The reunion came together quickly over last weekend as the Cardinals sought a righthanded-hitting option for designated hitter or a late-game enforcer and decided to act upon internal discussions — and some player lobbying — that kept circling back to Pujols.

The contract, first reported by the Post-Dispatch late Sunday, was agreed upon that night. Pujols, 42, already was packing for his early morning flight from California when Wainwright called to congratulate him. Ten seasons after leaving the Cardinals for the Angels, Pujols returned to the team that drafted him, developed him and launched him toward a Hall of Fame career.

A close colleague called it “ending a storybook career the right way.”

“It means a lot,” team chairman Bill DeWitt Jr. said. “Over the years, some of the great players in history who are associated with one team, they left that team, but didn’t come back. Given what he accomplished with the Cardinals and what the Cardinals did during his tenure was historic, it was difficult when he left. The way things worked out to be able to have him come back and finish his career here is very special.”

Early Monday morning, the Cardinals’ clubhouse had a buoyancy hours before Pujols’ theatrical arrival. Yadier Molina sat at his locker and talked with Pujols on FaceTime. Bench coach Skip Schumaker looked over Molina’s shoulder to say hello to his former teammate. Molina prepped several reporters to “be ready for him.” Another future teammate said the move meant “anything it takes to win.” Harrison Bader shared on social media a glimpse of the No. 5 jersey hanging at Pujols’ new (and old) locker. Wainwright was napping lightly, listening to the Calm app on his phone, before his start Monday when, 90 seconds before his alarm went off, Pujols embraced him.

Manager Oliver Marmol later laughed when asked if the signing might require another follow-up move — because his family has been renting Pujols’ Jupiter-area home.

A few times last offseason, Arenado and Pujols hit together near their Southern California homes. Arenado’s brother flips baseballs and pitches to Pujols sometimes for his workouts. Arenado gave a quick scouting report on how Pujols appeared slimmer, familiarly stronger.

“I think he’s going to be huge,” Arenado said. “Still think he’s got a lot left in him. He’s still got a lot of power, and he’s still scary. Nobody wants to go up there and face Albert Pujols. I don’t care who you are. Everybody knows in the back of their mind when that guy steps up to the plate damage can be done. And that’s a pretty uneasy feeling. I feel like last year we didn’t have that as much. Oh, good, we’ve got a really scary guy off the bench — and now we have him. It’s going to play a huge difference for us.”

“I’ve been working out,” he said at an (re)introductory news conference. “As you see.”

With a day off Tuesday from all workouts, the Cardinals’ next exhibition game is Wednesday. They want Pujols to get a handful of at-bats on the back fields against game-speed pitching, when possible, and then determine within the next few days when he’ll be comfortable leaping into the Grapefruit League schedule.

Asked if a week allows a veteran hitter enough time to be ready — maybe even in the lineup — for opening day, April 7, Marmol was succinct: “Yes.”

“Having a little spring of my own, knowing what I need to do to be focused and ready because when that call came, like it did (Sunday), I didn’t want to all of a sudden rush and get ready,” Pujols said. “I felt like I can get on the field tomorrow and play because I’ve been doing that. I know what it takes to get ready, so it won’t be long.”

The Cardinals have Pujols penciled in as their DH against lefthanded starters and targeted righthanders that are favorable matchups. Marmol called Pujols’ addition “crazy important — what he does to that clubhouse outside of his skillset in unbelievable, what he adds with his skillset is going to be incredible.”

What he does for ticket sales already has started.

Prices for the Cardinals’ opener against the Pirates skyrocketed by Monday, and there was also a run on tickets for the Cardinals’ final home game of the season — the final regular-season game for Pujols and Molina. The Cardinals catcher has said this is his final season as well, and there’s merchandise for sale at the ballpark.

A Cardinals executive and Pujols both mentioned this as the “last ride” for a trio of champions, adding Wainwright to their denouement. The righthander, at 40, has not said he will retire at season’s end, suggesting only that it’s possible. He laughed at being lumped into the farewell tour by the front office, saying “everywhere I go I get retired. I haven’t said one thing about it. I’m not crossing that bridge.”

The Cardinals are with Pujols and who he calls “my little brother” Molina, two keystones of the championship teams in 2006 and 2011.

The club welcomes the publicity, insists it won’t be a distraction from expectation.

“A lot of times when there are farewell tours, you have players who are not really contributing,” DeWitt said. “The three names that we have there we expect them to contribute greatly to a potential championship.”

Pujols returns from his 10-year contract with the Angels and six-month cameo with the Dodgers within reach of the joining the greats in multiple categories. Already the only player in Major League Baseball history with at least 600 homers, at least 3,000 hits, and at least two World Series titles, Pujols is 21 home runs shy of 700 in his career. He needs 18 to surpass Alex Rodriguez for fourth place all time, bested only by Hank Aaron, Barry Bonds, and Babe Ruth. Only Ruth with 2,214 and Aaron with 2,297 have more RBIs than Pujols’ 2,150. Sixty-five puts him behind only Aaron.

Pujols is also the active leader in total bases, with 6,042. He’s fourth all time, 38 shy of Willie Mays. He would then only trail Aaron and Cardinals great Stan Musial, who has 6,154.

Before clearing a spot on the 40-man roster or even acknowledging the finality of the deal, the Cardinals staged Pujols’ return after the first inning of Wainwright’s start. The right-field gate swung open, and onto the Roger Dean Field warning track walked Pujols, in that No. 5 jersey and toward the dugout. Led by the players in the bullpen as he walked by, an ovation spread through the stadium.

“I had to put on a smile because I was going to get a little bit emotional,” Pujols said.

“There was always hope. You never close the door.”

Minor-league report: Baker and Burleson go back-to-back in 'B' game versus Marlins

Juan Yepez hit his first extra-base hit of the Grapefruit in Monday’s 2-1 Cardinals loss to the Astros.

Righthander faced the middle of the Cardinals' order over and over again in his final spring appearance.

New deal will guarantee Bader more than $10 million and give him a chance to increase his salary with plate appearances before hitting free agency after 2023.

Albert Pujols is back with the Cardinals, talking Monday with manager Oliver Marmol, right, in Jupiter, Fla.

Albert Pujols celebrates after the Cardinals won Game 6 of the 2011 World Series, against the Texas Rangers, on Thursday, Oct. 27 at Busch Stadium. (Post-Dispatch photo)