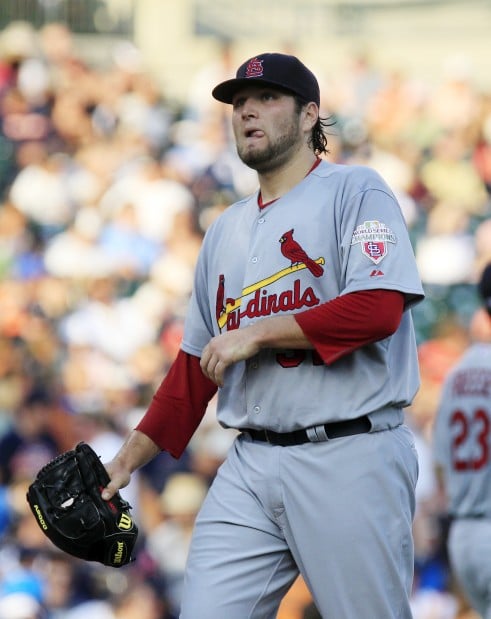 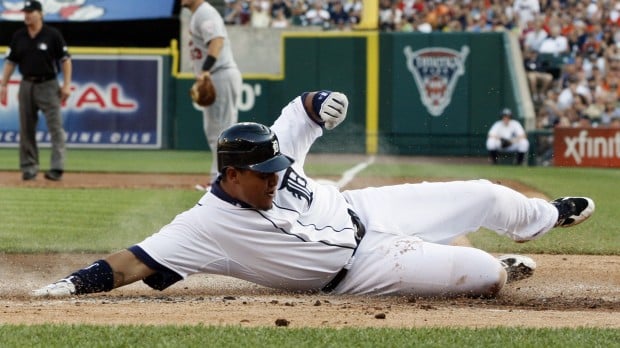 Detroit Tigers' Miguel Cabrera scores on a single by Delmon Young during the first inning of a baseball game against the St. Louis Cardinals in Detroit, Tuesday, June 19, 2012. (AP Photo/Carlos Osorio) 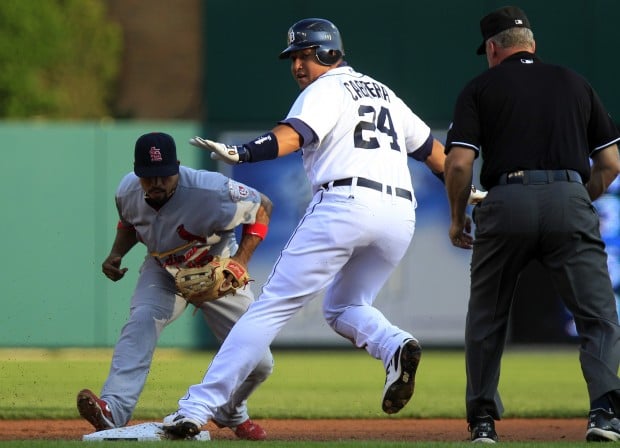 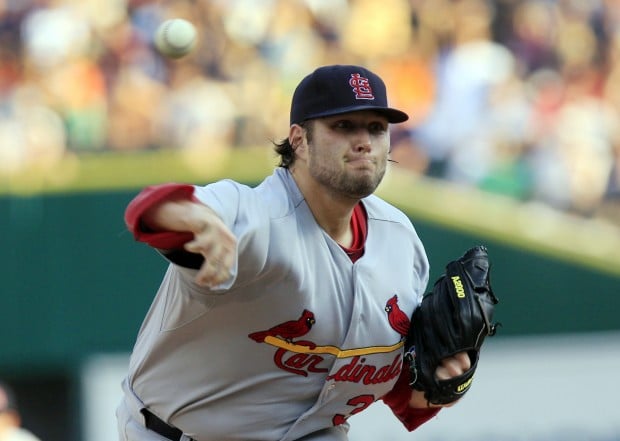 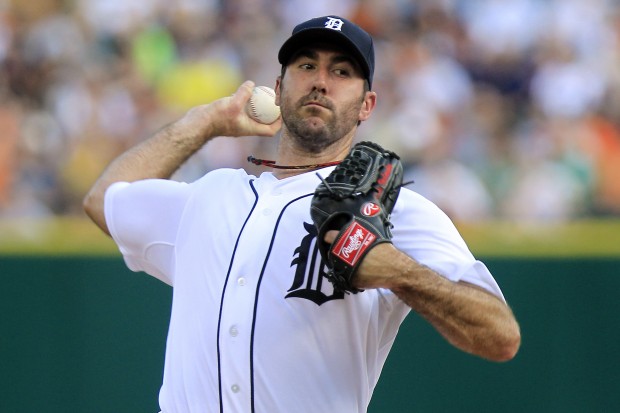 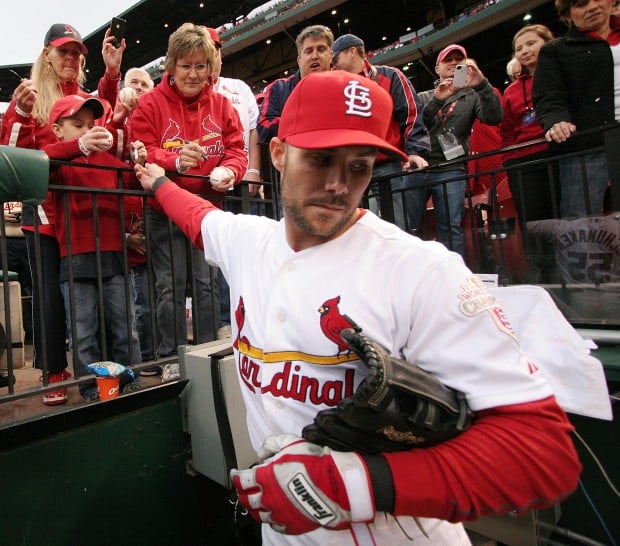 Cardinals second baseman Skip Schumaker signs autographs for fans before a game between the St. Louis Cardinals and the Milwaukee Brewers on April 27, 2012, at Busch Stadium in St. Louis. Photo by Chris Lee, clee@post-dispatch.com

DETROIT – This interleague thing with the Detroit Tigers, especially here, isn’t working out for the Cardinals.

The Cardinals won more games (three) against the Tigers at Navin Field in the 1934 World Series than they have won (two) in five years of interleague competition at Comerica Park.

Detroit hiked its interleague edge in this spacious yard to 11-2 over the Cardinals with a 6-3 win tonight in what purported to a heavyweight pitching matchup between Detroit’s Justin Verlander, the reigning American League Most Valuable Player and Cy Young Award winner, and the Cardinals’ Lance Lynn, the new tough kid on the block.

But Lynn had one of his rare off games of the season, giving up five runs in five innings as the Cardinals fell into a hole they found too deep to escape.

Verlander wasn’t unhittable. He had struck out 10 or more hitters in  six of his previous interleague starts against National League teams, some of which hadn’t had that up-close-and-personal look at the hard-throwing righthander.

In fact, Verlander walked four on Tuesday, or one more than he struck out . But he gave up only one earned run through six innings before an error by Detroit left fielder Quintin Berry gave the Cardinals two runs _ and a chance in the seventh.

Verlander ended his night by fanning Allen Craig on his 108th pitch to leave the bases loaded.

But after Tigers starter Justin Verlander walked Matt Holliday to load the bases _ it was his third walk in the inning _ Verlander threw three fastballs in the 100 mile an hour range to Allen Craig before fanning him on an 87 m.p.m. breaking ball to end the threat.

David Freese and Rafael Furcal both walked and Daniel Descalso singled for the second time in the inning. With the bases loaded, Carlos Beltran hit a liner slicing away from Berry, who ran down the ball but then couldn't hold on as Freese and Descalso scored.

DETROIT _The Cardinals finally broke in the sixth inning tonight against Detroit ace Justin Verlander but the run they scored in the top of the sixth was canceled by a Tigers tally in the bottom half and they trailed Detroit, 6-1, after six innings.

Daniel Descalso singled in the sixth, moved up on Rafael Furcal’s groundout and went to third on Carlos Beltran’s single. Matt Holliday grounded to first baseman Prince Fielder, who double-dribbled the ball, getting only an out at first, as Descalso scored.

TIGERS UP 5-0 AFTER FIVE

DETROIT _ The Detroit Tigers moved ahead of the Cardinals, 5-0, after five innings tonight at Comerica Park, with Delmon Young singling home his second run of the game in the fifth inning.

As Cardinals starter Lance Lynn sailed past 100 pitches on a hot night, Quintin Berry singled to open the fifth, Miguel Cabrera walked and Young blooped a single out of the reach of second baseman Daniel Descalso.

DETROIT _ Not that he needed them, but the Detroit Tigers scored three more runs in the second inning tonight for ace righthander Justin Verlander. The Tigers led, 4-0, after an inning which featured a bunt play that wasn't defended successfully by the Cardinals.

Brennan Boesch and Jhonny Peralta both singled before Ramon Santiago squared to sacrifice. Third baseman David Freese had been playing in for the bunt but backtracked to the bag when he saw lumbering pitcher Lance Lynn move to make a play on the ball.

The only problem was, that by the time Lynn gloved the ball while running toward third, Boesch already was there and all three runners were safe.

The bases still were loaded after Gerald Laird fouled to Yadier Molina by the screen. But Austin Jackson doubled in two runs and Santiago, who shouldn’t have been on base, came home on Quintin Berry’s groundout.

Molina's fifth-inning single was the only other hit off Verlander as the game reached the halfway point, still 4-0. Verlander had walked no one and fanned two.

Lynn had two clean innings after the second but the Cardinals were running out of chances to help him.

The Cardinals properly pitched around dangerous Prince Fielder, walking the first baseman. But Delmon Young singled to left, scoring Cabrera. Fielder, challenging the Cardinals to cut off left fielder Allen Craig's throw, steamed around second and headed to third. Third baseman David Freese did cut off the ball and ran down Fielder himself. But it still was 1-0, Detroit, which often is enough for Verlander.

DETROIT • Infielder-outfielder Skip Schumaker has been activated from the 15-day disabled list and will be in center field hitting eighth tonight when the Cardinals open a three-game interleague series against the Detroit Tigers.

Schumaker has appeared in 29 games this season and is batting .321. He went 3 for 8 in three games for Triple-A Memphis in his rehabilitation assignment.

There have been occasions when Schumaker came back too soon from injury, like last year when he had a right triceps strain. But, after rehabilitating at Busch Stadium and going three for eight in three games at Class AAA Memphis on a rehabilitation assignment, Schumaker feels he is ready this time.

“I don’t think I’d jeopardize the team by taking up a roster spot, if I didn’t feel I was ready to go," he said.

“I think I learned from the past _ that if I’m not ready, to say something.”

Schumaker was 26 for 81 when he was healthy. The trouble, is, he has missed about half the season.

“It’s very frustrating,” he said. “You work all off-season to get prepared for the season and then you get hurt.

"For that to happen to me twice was frustrating. Hopefully, I can stick around longer this time and not get back on this DL. Because it’s miserable."

Manager Mike Matheny said Schumaker, 32, had been missed more than just on the field.

“Skip’s a big boost for this team. Just not physical, but what he does for this team, leadership-wise,” said Matheny.

“He’s not afraid to stand up and say something. You could tell the last time he came back, it instantly was a different demeanor to the team. We’ve talked about having Lance Berkman around and what that means to the chemistry in the clubhouse. But it’s even amped up another level when (a player) can go out and compete with the rest of them.”

Matheny said that until Jon Jay (sprained right shoulder) returns, Schumaker, who also plays second, most likely will be an outfielder.

“Right now, that’s the best fit,” said Matheny. “But he still is going to get time at second base.”

Infielder/outfielder Matt Carpenter, who has been on a rehabilitation assignment to cure his own sore oblique, was moved from Class AAA Memphis to Class AA Springfield because the latter team was in action on Monday when Memphis wasn’t.

Carpenter is playing with Springfield at Arkansas (Little Rock) while Jay has joined the Memphis team in Omaha. Carpenter is expected back sooner than Jay.

Matt Holliday is serving as the designated hitter tonight for the Cardinals as Matheny wants to relieve the pressure from Holliday, who has a hip flexor injury, of having to play the outfield.

What’s happened to the Cardinals offense?

Strauss calls it a python attack — feast occasionally, then lie around immobile for several days.

Bring your questions and comments for a live discussion with the P-D baseball writer.

Detroit Tigers' Miguel Cabrera scores on a single by Delmon Young during the first inning of a baseball game against the St. Louis Cardinals in Detroit, Tuesday, June 19, 2012. (AP Photo/Carlos Osorio)

Cardinals second baseman Skip Schumaker signs autographs for fans before a game between the St. Louis Cardinals and the Milwaukee Brewers on April 27, 2012, at Busch Stadium in St. Louis. Photo by Chris Lee, clee@post-dispatch.com