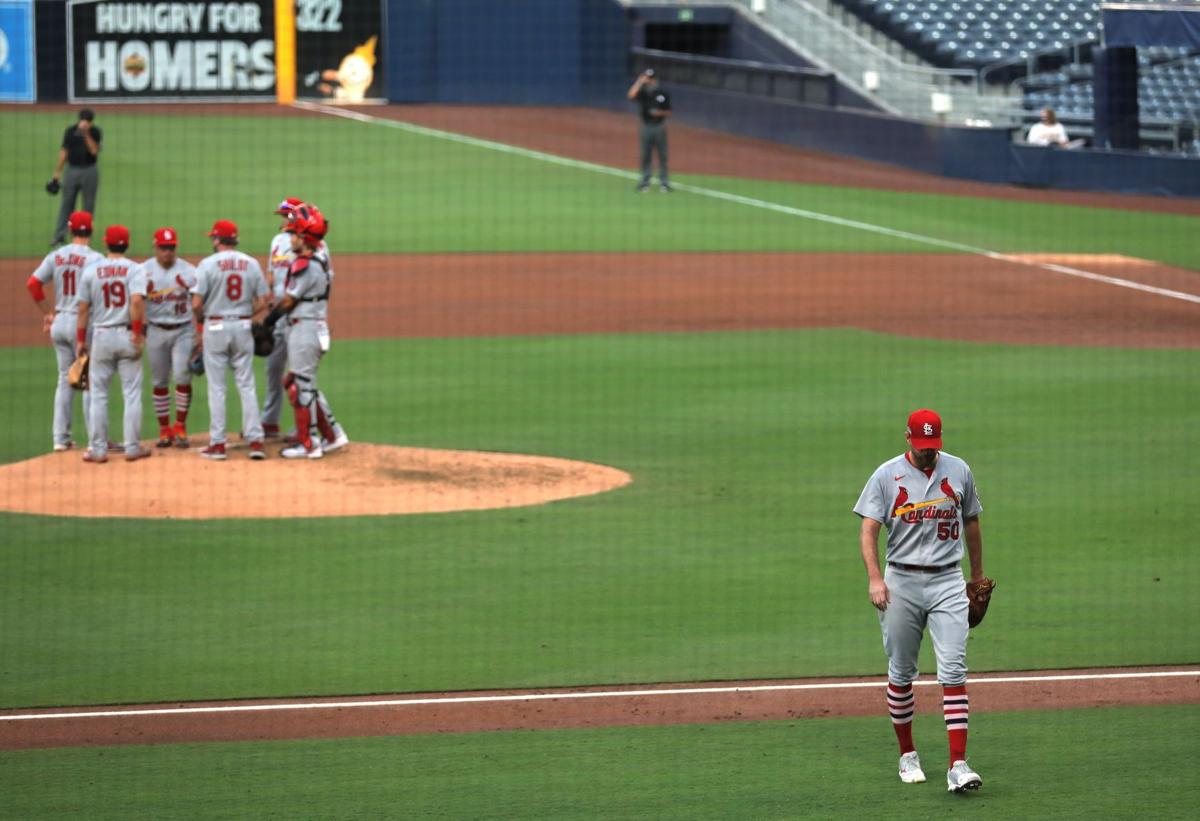 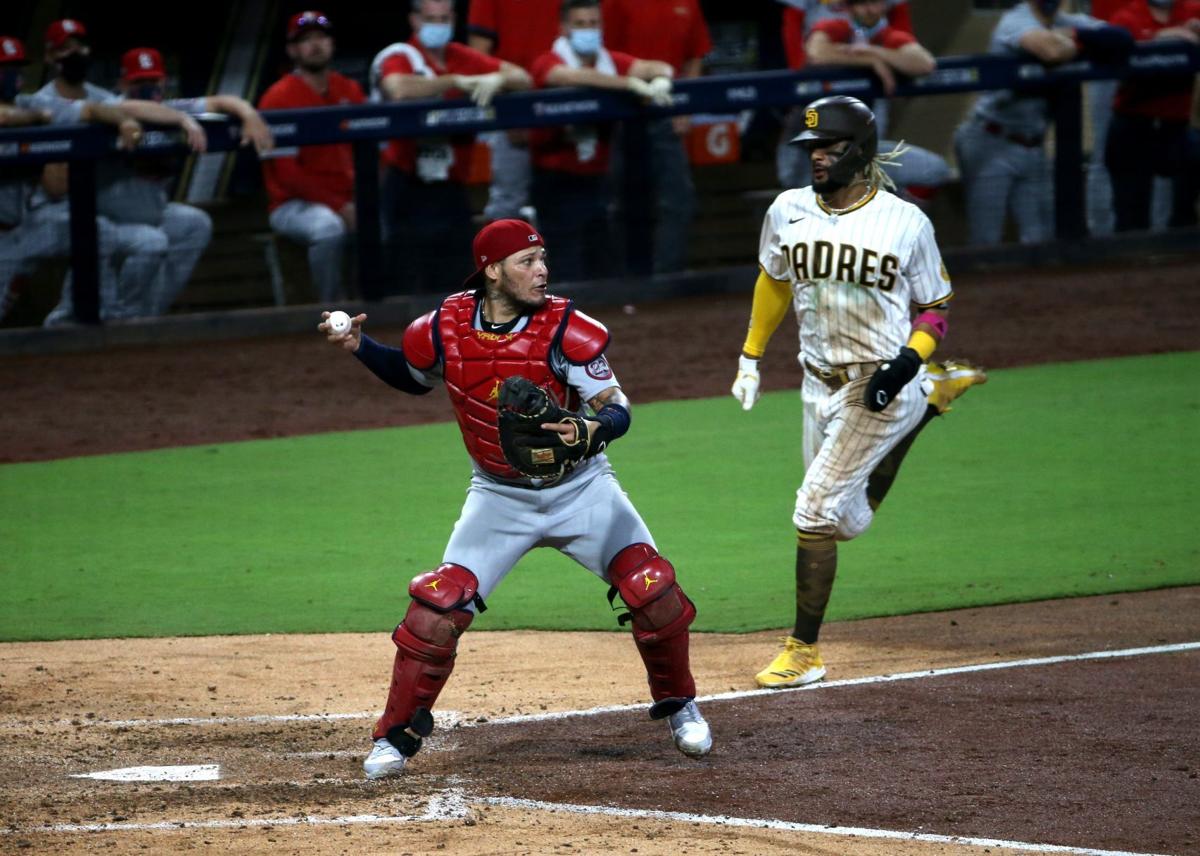 Cardinals catcher Yadier Molina  tags home to get San Diego's Fernando Tatis Jr. (23) out at home and throws to second base to turn a double play in the seventh inning during Game 3 of a wild-card series on Friday, Oct. 2, 2020, at Petco Park in San Diego. (Laurie Skrivan, lskrivan@post-dispatch.com) 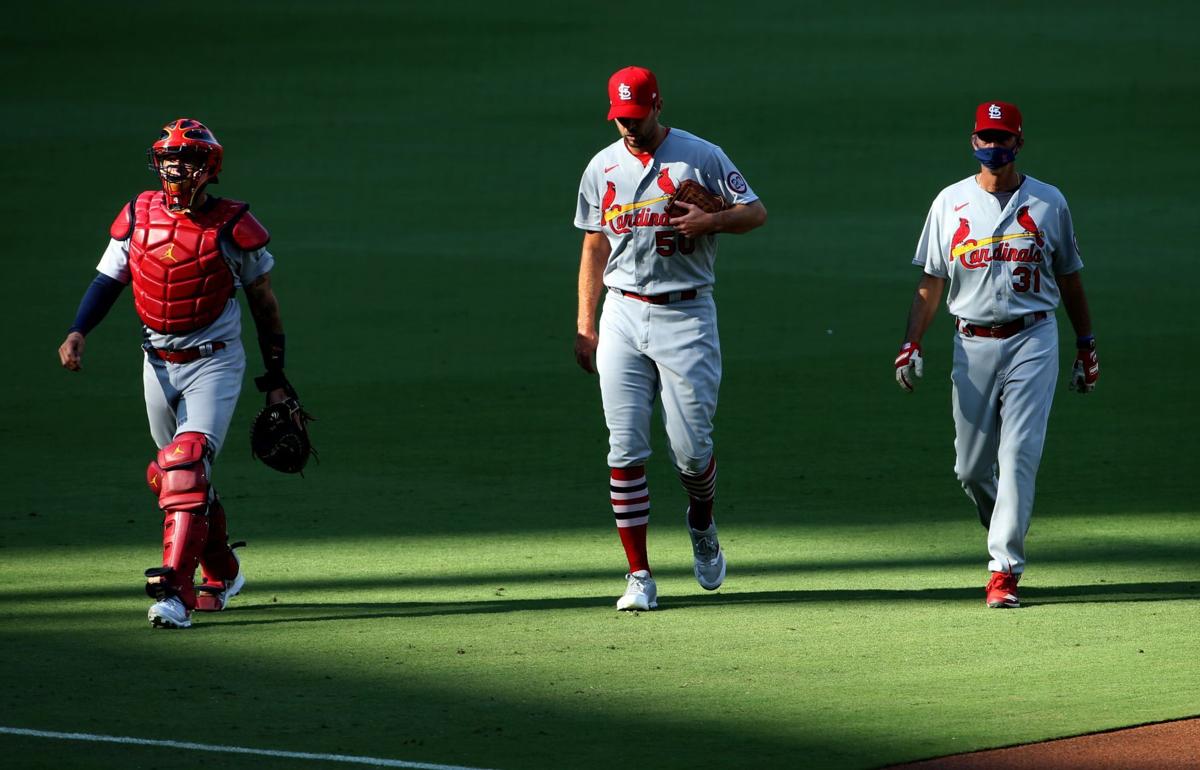 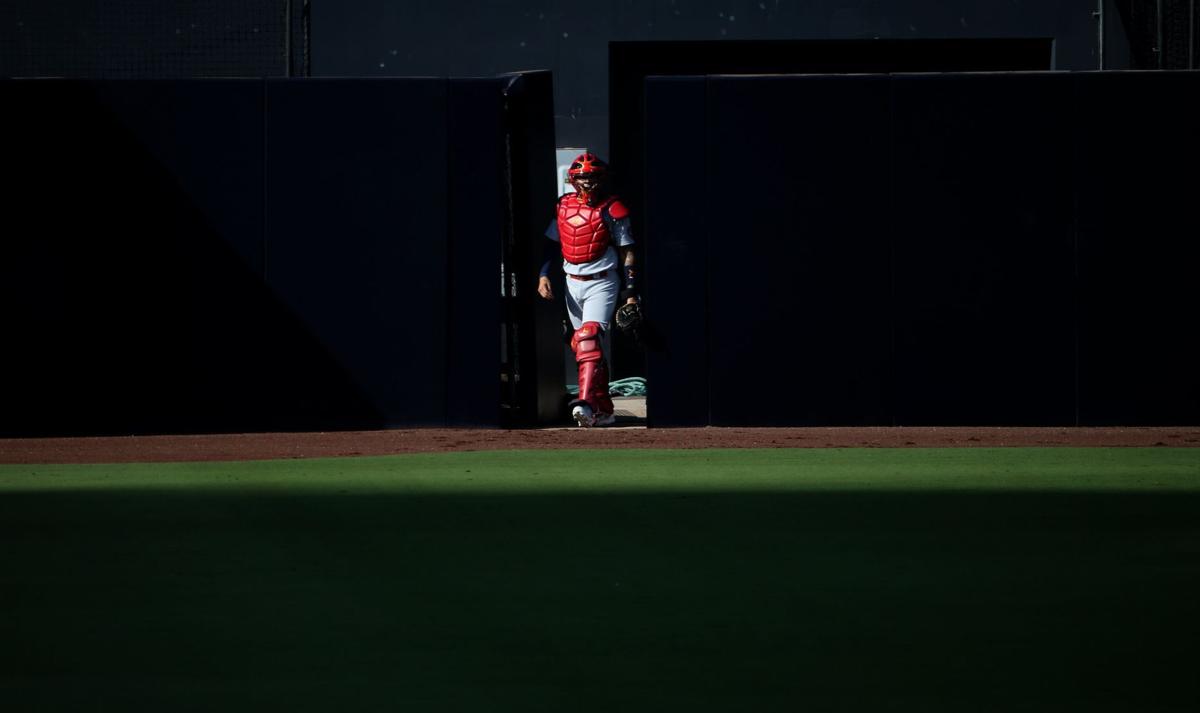 St. Louis Cardinals catcher Yadier Molina (4) enters the field before the start of Game 3 of a wild-card series between the St. Louis Cardinals and San Diego Padres on Friday, Oct. 2, 2020, at Petco Park in San Diego. Photo by Laurie Skrivan, lskrivan@post-dispatch.com 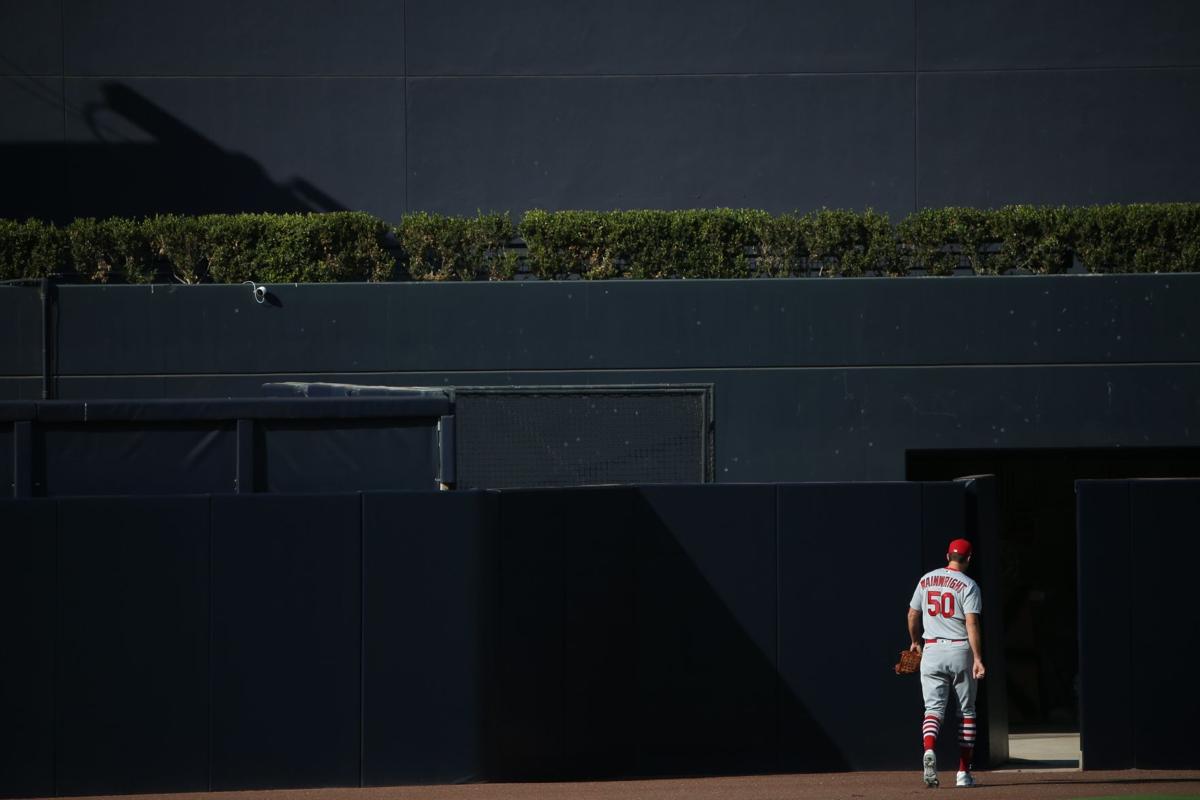 St. Louis Cardinals starting pitcher Adam Wainwright (50) walks to the bullpen before the of Game 2 of a wild-card series between the St. Louis Cardinals and San Diego Padres on Thursday, Oct. 1, 2020, at Petco Park in San Diego. Photo by Laurie Skrivan, lskrivan@post-dispatch.com 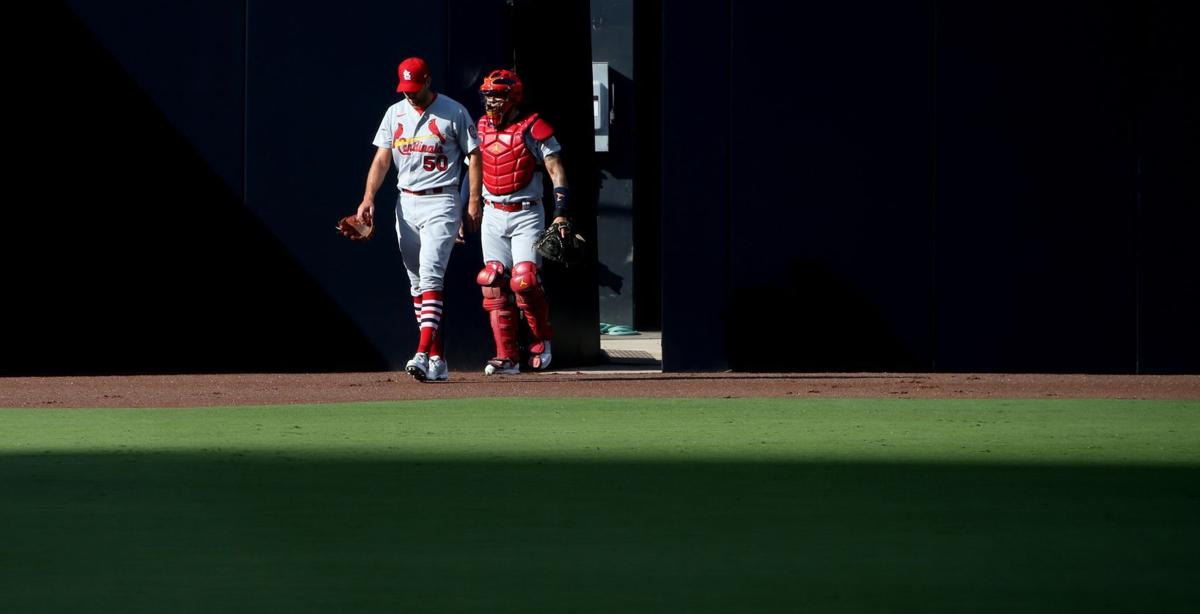 Adam Wainwright and Yadier Molina enter the field before a 2020 posteason game. Photo by Laurie Skrivan

SAN DIEGO — The Cardinals weren’t 30 minutes into their offseason with months of inevitable, critical, and potentially dramatic changes still ahead, and manager Mike Shildt already had an idea of what he’d like to see at the start of the 2021 season.

He described a morning in Jupiter, Florida, with the sun rising on the Cardinals’ facility only to illuminate that Yadier Molina had beaten the brightest star to work, again.

This is no time for his Cardinals career to set.

“I can tell you honestly, I hope like heck I see him in spring training at 6 o’clock in the morning coming to our complex getting his work in, because this guy has got some baseball left in him,” Shildt said. “He’s dedicated himself to be able to play — not only play, but excel. And I think he more than proved that this year. This is a hungry guy. I’d love to have him back, and I don’t know how much clearer I can make that.”

The Cardinals’ season came to an end Friday night at San Diego’s Petco Park with the same question they had all the way back in Florida in February — how were they going to score runs? The Cardinals won Game 1 of the wild-card series, twice had a four-run lead in Game 2 of the best-of-three matchup. Then when the Padres’ flipped their power back on, the Cardinals couldn’t keep up. The Padres authored the first nine-pitcher, nine-inning shutout in postseason history to win Friday, 4-0. From the bottom of the sixth in Game 2 to the end, San Diego outscored the Cardinals 13-3.

The Padres advance to a division series against the Dodgers. The Cardinals returned to St. Louis on Saturday, and the end of constant COVID-19 tests and the beginning of persisting questions. Those start with the expiring contracts of the battery that energized an era: Molina and Adam Wainwright.

Both players have expressed an interest in returning. Both have discussed privately the possibility of going elsewhere to play, together. Molina, 38, would like to play two more years, and the Cardinals have had discussions about what a return contract would look like.

“He’s the best back there,” starter Jack Flaherty said.

The Cardinals had a clear succession plan in place at the start of 2020. This was going to be the year that Flaherty asserted himself as the ace, that young outfielders thrived, that rookie Dylan Carlson arrived, and that the roster got younger, the results better. They wanted a transition of power from the decades defined by Molina and Wainwright to the new faces of the franchise reaching the same expectations. Instead, they got an assertion from the seasoned vets.

The unexpected happened often in 2020, and when the Cardinals emerged from a 17-day quarantine and coronavirus outbreak that infected 18 members of the traveling party, the players who stabilized them, who lifted them back to contention were familiar: old reliable.

Molina, who tested positive for the virus, missed the Chicago stretch of the return as the Cardinals began their run of 53 games in 44 days. But when he gained clearance to play, play he did. Molina caught 37 games in 39 days, and during that stretch he had 34 hits, hit .268, and elevated his OPS for the season from .444 to .662. He also took a bat to the left hand a few days before a pitch hit him near the same spot. Teammates said his toughness set a tone they couldn’t ignore.

Wainwright led by example, too. He volunteered to make the first start after the team was removed from baseball’s schedule for 17 days, and he threw five innings for a win against the White Sox. When the bullpen was threadbare and winded by some of the 11 doubleheaders the Cardinals played, Wainwright pitched a complete game on his 39th birthday, against Cleveland.

Five of his final six starts were quality starts, and so many times during the season when the Cardinals teetered or were tired, Wainwright was timely.

On and off the field, he steadied the club and offered the young pitchers the Cardinals will rely on in 2021 a lesson, if they were watching, as Flaherty explained.

“He was fun to watch all year,” Flaherty concluded. “Stud. Absolute stud.”

Same in Game 3, as No. 9 hitter Jake Cronenworth singled to start a rally in the seventh and homered to end the Padres’ scoring. The night before, he reached base in three of his four plate appearances, and he was there as Fernando Tatis Jr. socked a three-run homer that changed the series. Tatis and Wil Myers each hit two homers in the final four innings of Game 2, joining Lou Gehrig and Babe Ruth as the only teammates with multiple homers each in a playoff game.

Much of the other history made in the series was personal, by Molina.

The Cardinals’ catcher played his 100th playoff game and got his 100th playoff hit in it, asking for the ball as he returned to the dugout. In his 101st game, he got his 101st hit, and the only catcher with more in the playoffs is Jorge Posada. He has 103. Molina surpassed all players other than Derek Jeter with his 78th playoff single. Souvenirs from the series were routinely rolled over to the Cardinals’ dugout because Molina led the Cardinals with six hits, a .462 average, and a 1.115 OPS in the brief series. That prompted Shildt to do something he rarely does — stump.

Molina’s three-year, $60-million contract expires next month, and Shildt described how what the Gold Glove winner brings is difficult to measure in commas and zeroes.

“I say this all the time about Yadi — he makes everybody, including me, better,” the manager said. “In a world of evaluation now where most everything is analytics, you cannot put an analytics to Yadier Molina. You can’t come close to doing it. How he shepherds our staff. How he leads by example. You just can’t do it. Look, we’re throwing out balls left and right for records he’s tying and breaking. There are pillars to the organization that are there. There are reasons we’ve been in the playoffs a lot. Is he the sole reason? He wouldn’t say he’s the sole reason. But look up and realize that since 2004, how many times we’ve been in the playoffs and how many people are still standing, outside of ‘Waino?’”

They could leave together.

Asked about his feelings following what could be his final Cardinals game, Molina insisted he did not “want to talk about myself.” He instead wept as he talked about the death Friday of Bob Gibson and the recent death of Lou Brock. He talked about Gibson’s humor, about his intelligence, and his commanding presence.

It’s how Wainwright has described Molina.

The standards were set before them, and they’ll exist after them, and that too echoed in the clubhouse Friday night. The goal, unfulfilled in 2020, remains the same.

Shildt hopes the catcher does, too.

“We’re not satisfied with what just happened,” Shildt said. “We’re not satisfied with our season being over in the wild card. Let’s make that perfectly clear. Nobody in that clubhouse is satisfied. There are some disappointed people in that clubhouse. There’s also, from my seat, some satisfaction in an unusual year (that) we had the most unusual, and we were able to get where we got.

“Remarkable is probably the first word that comes to mind.”

BenFred: Power plays in MLB's bracketball, and the Cardinals (and their division) could not come up with enough

With Gibson on his mind, Flaherty delivers gutsy start, but Padres shut out Cardinals, end their season

BenFred: Cardinals managed to make 2020 matter, but something must be done about disappearing offense

Wainwright makes his pitch as a broadcaster, will join Braves-Marlins coverage on FS-1

A pending free agent, Wainwright isn't the first active player to shift from competing in the playoffs to commenting on them for TV.

'A rookie again': Wainwright swaps curveball for a microphone, debuts on playoff broadcast

Cardinals veteran reveals his plans for 2021, sort of. Says he'll either be broadcasting games or pitching in them.

Wainwright receives honor for his leadership on the field and his charitable work off of it, which has included constructing clean-water systems.

Cardinals catcher Yadier Molina  tags home to get San Diego's Fernando Tatis Jr. (23) out at home and throws to second base to turn a double play in the seventh inning during Game 3 of a wild-card series on Friday, Oct. 2, 2020, at Petco Park in San Diego. (Laurie Skrivan, lskrivan@post-dispatch.com)

St. Louis Cardinals catcher Yadier Molina (4) enters the field before the start of Game 3 of a wild-card series between the St. Louis Cardinals and San Diego Padres on Friday, Oct. 2, 2020, at Petco Park in San Diego. Photo by Laurie Skrivan, lskrivan@post-dispatch.com

St. Louis Cardinals starting pitcher Adam Wainwright (50) walks to the bullpen before the of Game 2 of a wild-card series between the St. Louis Cardinals and San Diego Padres on Thursday, Oct. 1, 2020, at Petco Park in San Diego. Photo by Laurie Skrivan, lskrivan@post-dispatch.com

Adam Wainwright and Yadier Molina enter the field before a 2020 posteason game. Photo by Laurie Skrivan