Seeking 'synch': As games begin, Goldschmidt and Cardinals aim to get their groove back
0 comments
Share this
{{featured_button_text}}
1 of 2 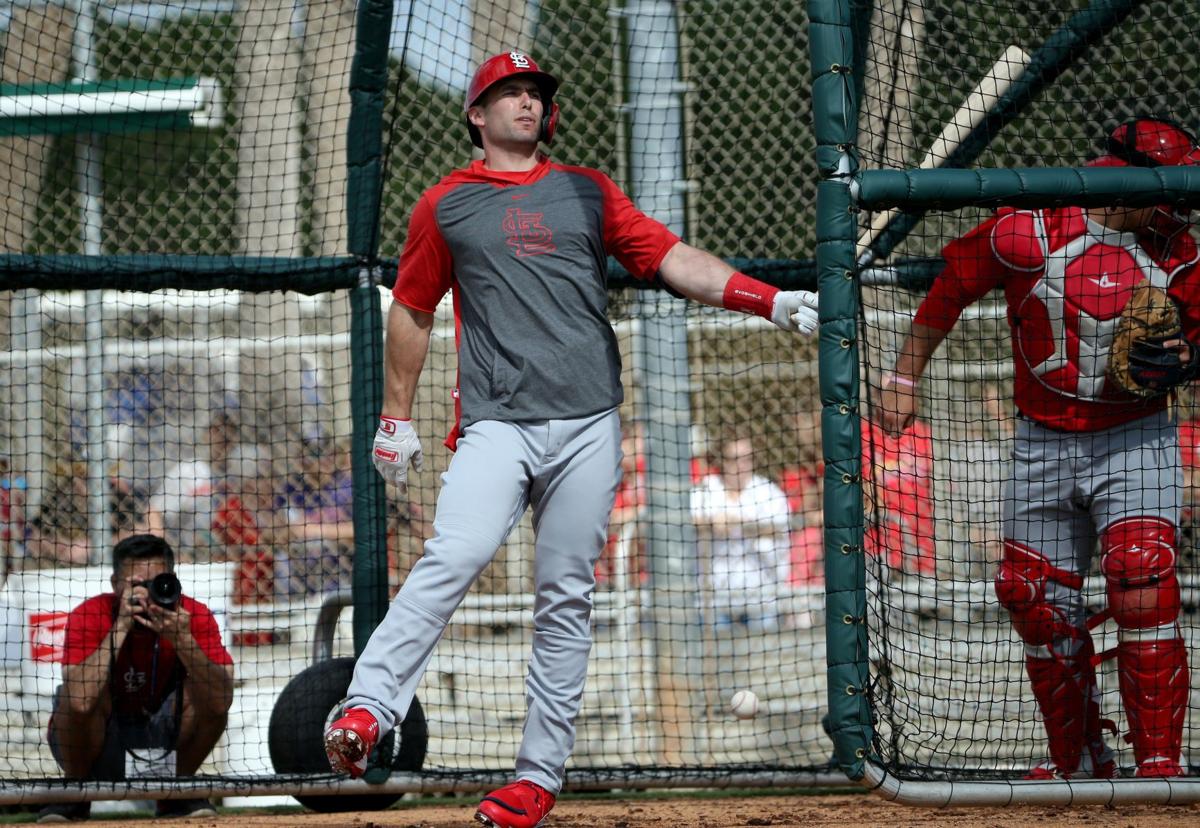 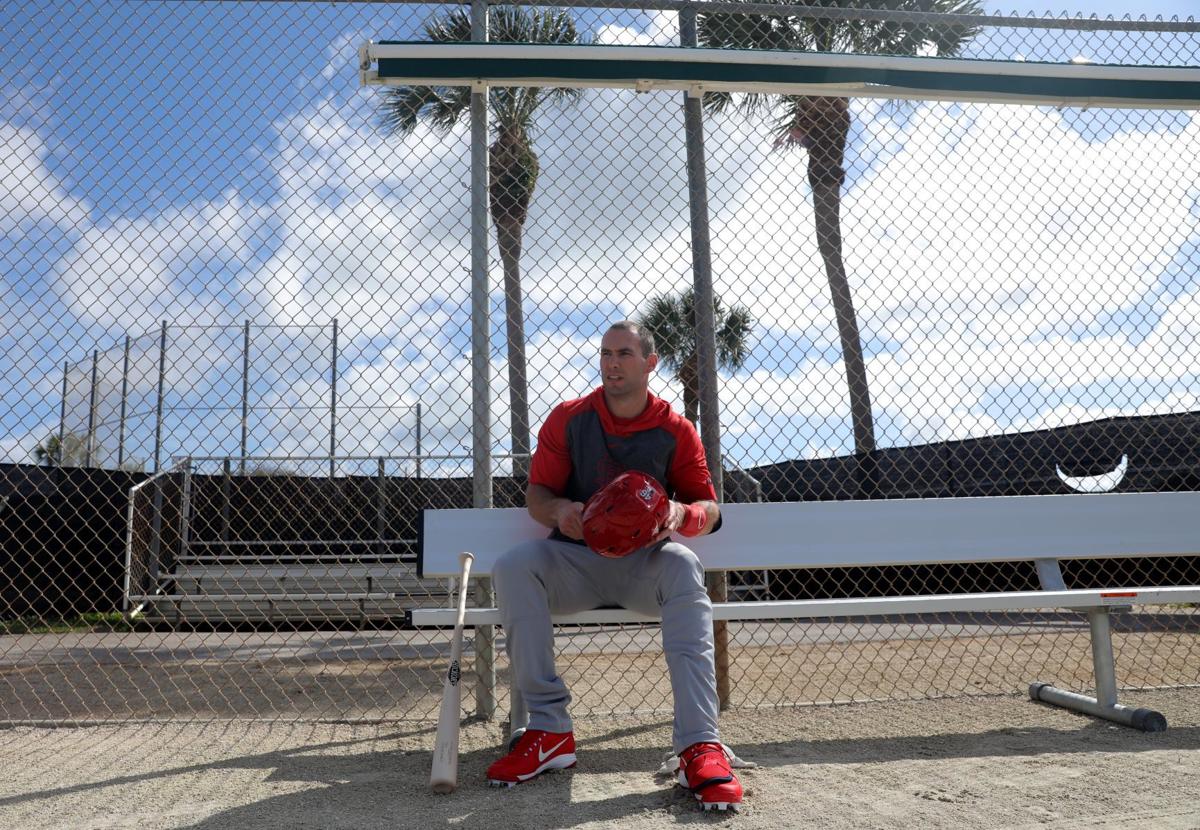 JUPITER, Fla. — Around the middle of this offseason, sometime before his family moved from Arizona to what will be their new home near Jupiter, Fla., Paul Goldschmidt decided to try going on a media fast. He stopped scanning news stories on his phone. First for a week, then two became three, three became six, an experiment became habit, and made his explanation believable this past week when he apologized for not knowing the details of the sign-stealing scandal upending baseball.

But that didn’t leave his phone unused.

He still had calls to make, texts to return, and a swing to solve.

In November, about two weeks earlier than usual, the Cardinals’ first baseman began hitting, and with video from past seasons to compare with video taken on his phone, he continued seeking the swing that felt out of reach, out of synch last summer. He started earlier to have time to make adjustments, but instead found validation of what he knew was off — his body position during his swing was as inconsistent as the results. Cause meet effect.

“I was just too inconsistent,” Goldschmidt said Friday morning in the Cardinals’ clubhouse. “There were times that I was good and times I wasn’t. I was trying to, trying to get the work, but the results just weren’t there. The swing was inconsistent.”

The All-Star was still able to slug 34 homers and get to 97 RBIs with 60 in his final 73 games, but what he felt in his swing was true throughout the Cardinals lineup. It rippled with inconsistency. As the Cardinals open their 30-game slate of exhibition games in Florida, how they are going to score runs is the $234 million question.

Goldschmidt will start Saturday’s Grapefruit League opener against the Mets at designated hitter, and he’ll start at DH again Monday. Bothered by elbow discomfort in the weeks leading up to camp, the Gold Glove winner has been limiting his throws to rebuild strength and make sure “the soreness is fully gone.”

He has not been limited by the elbow at the plate, so he can get game-speed at-bats to begin sharpening his timing, start testing the adjustments he’s made. The word he kept using for what he lacked — “consistency” — is the one that manager Mike Shildt used to describe the identity the 2020 lineup must have.

Entering last season, his first with the Cardinals, Goldschmidt wanted to be aware of the kinks that come with changing teams, and he felt he avoided falling “into any traps.”

He also didn’t slip into any rhythm.

Goldschmidt announced his presence in the division with three homers in his second game with the Cardinals — three of the nine he hit in the first month. They came in bunches like that. He had two in May, 11 as the NL Player of the Month in July. He hit .181 in June, had a 1.085 OPS in July. Goldschmidt didn’t have back-to-back months with slugging percentage better than .500, or consecutive months with an .800 OPS. And yet, stacked together, those months gave him team highs in almost every significant offensive category, from homers to RBIs to runs to OPS for everyday players.

“I think the expectations set for him being anything less than Superman was going to be a perceived struggle,” Shildt said. “This guy really moved our needle. Down (offensively) from maybe some of his career numbers, and still was an anchor for what we did and a huge reason we were in the playoffs. A real pillar for our team.”

Within the rolling surges of his season, Goldschmidt could see the outcome of the swing that eluded him. He spent all the time he had trying to find “a good, powerful hitting position,” but when he found it with his hands, he was off with his legs. He’d feel right when he’d bring the bat back to begin the swing and feel wrong with his balance. He didn’t need the numbers to know, but they showed it, too.

He slugged .517 in April despite a .259 average – a sign he said of when the swing was right it did damage, but it wasn’t right enough to hit for a high average. He was often hitting behind in the count, and on Friday suggested that if he fouled off a pitch he usually hit, that would be the reason.

“I would be like boom and then there would be times I’d be like, man, I could have hit that pitch, maybe not for an extra-base hit but for a single — and that’s just getting to a consistent hitting position,” Goldschmidt said. “I felt it early. When you’re in the good, powerful hitting position, everyone’s swing is going to take care of it. But when you’re inconsistent with that, your timing is going to be off, your swing is going to be off. Your pitch recognition. All of that.

“I was just never, in my opinion, able to really synch my swing up.”

All around him in the clubhouse — and in the lineup — are similar sensations. Matt Carpenter has spent the winter going retro, seeking out the swing that made him a “complete hitter.” Harrison Bader has retooled his swing for greater contact. Tyler O’Neill talked Friday about how he’s been able to lay off pitches in Live BP and is eager to show that same refined restraint “in front of a couple of thousand people and have those adrenaline juices flowing. You need a game to prove it.”

Spring box scores are known to lie. Line drives caught in left field don’t show up as singles, but dribblers past the mound do. As Shildt sorts through who hits where in the revamped lineup, stats are fine, but that synch Goldschmidt described, that timing is telltale. Shildt said the batter who hits “the ball on the screws, he’s on time, he’s situationally taking care of business — that guy has got a great chance of making the team.”

Or, in Goldschmidt’s case — leading the team.

“You want to create good habits, you want to get back into what your routine is, and of course hit the ball hard,” Goldschmidt said. “The quality of your work, not necessarily the results. I think spring is very important in creating those good habits … and working and preparing yourself for opening day. I’m not messing around out there.”

Infielder Edmundo Sosa, 23, is considered one of the finest gloves in Cardinals’ camp this spring.