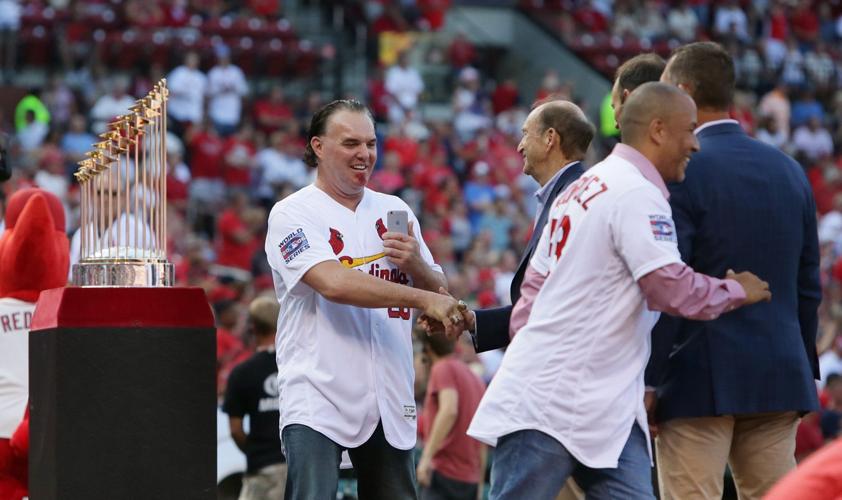 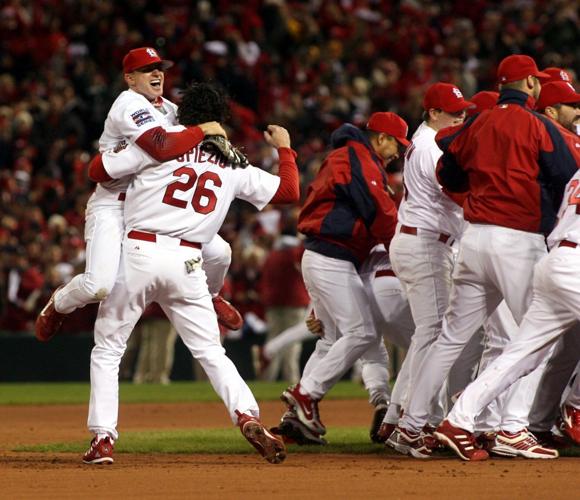 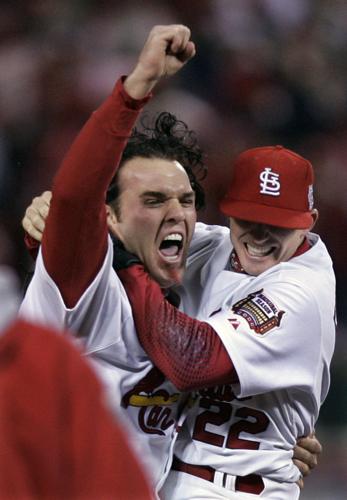 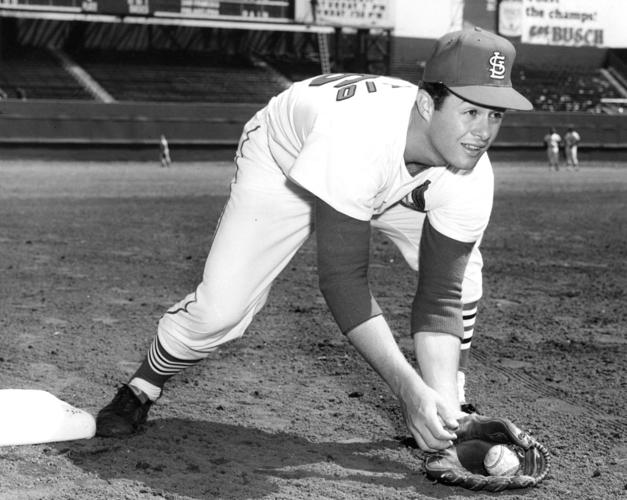 Ed Spiezio, during a workout at Busch Stadium in the 1960s. (Post-Dispatch archives)

Scott Spiezio will be four years sober on April 6. But this positive news comes after 11 rehabs for cocaine and, more recently, alcohol abuse, over the past 15 years, or since he played a key role for the World Series champion Cardinals in 2006 and also played with them for part of the 2007 season, sandwiching his first rehab stint.

Spiezio, 49, lives on 47 acres in Morris, Illinois, near Joliet and about 1½ miles — he said he can kayak there — from his father, Ed Spiezio. If that name sounds familiar ... Ed Spiezio was a backup third baseman on the 1964, 1967 and 1968 Cardinals teams which went to the World Series, winning two.

Some 20 acres of Spiezio’s spread is available to be rented by prospective farmers. He does no farming, but since leaving the game, Spiezio gives hitting and fielding lessons to young players, taking advantage of a batting cage and gym he has on his property.

During the COVID year of 2020, when there was no minor-league baseball, Spiezio managed an independent league team in Joliet, with help from former big leaguers Glenallen Hill and Corky Miller. “That kind of got my juices flowing again for baseball,” said Spiezio by telephone.

His son, Tyler, was playing football and baseball at Williams College in Massachusetts, and Spiezio began working with him at his facility in Morris.

“I call it the Home of Champions,” said Spiezio, who hit a big home run in Game 6 to help the California Angels to the 2002 World Series title. “Between my dad and I, we’ve got four (World Series) rings.” And, he added ruefully, “Three hip replacements, too.”

But what the young players learn at the Spiezio facility might pale in comparison to the life lessons he tries to impart to youngsters — and even adults — in speaking engagements at area schools and his local church in Minooka.

“I started going there before I was sober, and I felt like God was talking to me,” Spiezio said. “It was like they were writing the sermons for me.”

During his addresses, Spiezio said, “I talk about the struggles that I had. Kind of a cautionary tale. I’m pretty honest about what happened to me and poor decisions that led to heartbreak and people around me. I probably talk to anyone between 6 years old and 23 years old. It’s been a lot of fun and rewarding, also.

“But it was about a 12-year struggle. I’d get eight or nine months of sobriety multiple times, but I could just never break through.”

Spiezio, twice divorced, credits a close friend, Tanya Boyer, for her help, especially involving Spiezio in the church. “She was just an incredible person to help me get through it. God sent her at the right time, I think,” Spiezio said.

The first of Spiezio’s rehabs came during August 2007. He had had trouble wrestling with the drunk driving death earlier that year of Cardinals teammate Josh Hancock and found himself using alcohol even more. Spiezio was out for just more than two weeks and returned to play a dozen games in September.

“I was doing outpatient therapy, and I was just trying to get back to the team,” Spiezio said. “I didn’t focus enough on what I was dealing with. The first steps in (Alcoholics Anonymous) are to admit you’re powerless over alcohol and that your life has become unmanageable. For me to say I was powerless over anything was, like, impossible.

“It’s really hard to go through the 12 steps if you can’t get past the first one,” he said. “It took me a long time. I mean, I can’t have any alcohol. Zero. Because 10 is not enough and one is too many. And it’s kind of weird because until I got hurt in Seattle (in 2005), I hardly ever drank and I had never seen a drug until I was 33.”

He said his second wife encouraged him to try cocaine. “I liked it because it helped me concentrate,” Spiezio said. But the cocaine combined with alcohol ultimately became “like a hundred million pound weight. When you start using something, your brain chemistry changes and you start doing things you would never have done.”

After the 2007 season, Spiezio was charged with hit-and-run, driving under the influence and assault and battery in an incident stemming from a single-car crash in Orange County, California. The Cardinals, who had given him a $4.5 million, two-year contract, released him in spring training. Spiezio received three years of probation on a plea bargain. He would never play in the majors again.

Ultimately, Spiezio began blocking numbers of those who weren’t really his friends. He handed his bank accounts over to his father.

“I just said I was going to start moving sticks,” Scott Spiezio said. “So I’d go outside and pick up a stick and move it to the burn pile. The second day I had a big pile, and by the third day I had the whole yard cleaned. Just little projects to keep me occupied.”

Spiezio had a 12-season big-league playing career which began in 1996 with Oakland. Spiezio, who hit .271 here, wore No. 26, the same as his father, who batted .205 here in parts of five seasons before going on to San Diego, where he had the first hit and homer in Padres’ history. The elder Spiezio is 80, and next year he and his wife will celebrate 60 years of marriage.

Of Scott Spiezio’s two biggest moments with the Cardinals, one came in the 2006 National League championship series and one on the next-to-last day of the regular season. Both involved him replacing teammates who well could wind up in the National Baseball Hall of Fame.

In Game 2 of the championship series, manager Tony La Russa angered third baseman Scott Rolen by sitting him for Spiezio. Rolen was battling a sore shoulder and did come in for defense later but said he could have started. Spiezio smacked a two-run, seventh-inning triple off right fielder Shawn Green’s glove to tie the game. And then, with Albert Pujols, the runner at third, yelling at the switch-hitting Spiezio to “hit the ball the other way,” Spiezio doubled home a run in a three-run ninth inning off New York Mets lefthander Billy Wagner as the Cardinals evened the series.

“I’ve got to make sure that Rolen gets in (to the Hall) so I can tell that story,” joked Spiezio. “I think La Russa did a really good job juggling. He knew I was kind of hot. And he knew that Rolen’s shoulder was bothering him. Rolen is never going to tell anybody he’s hurt. But he was hurting.

“It just worked out. That’s one of the reasons why I say it was a magical season.”

The Cardinals that year had suffered through a late September losing streak of seven games. Their lead over pursuing Houston in the National League Central Division was shriveling and the Cardinals, on the final Saturday of the season, were trailing Milwaukee 2-0 in the eighth with two outs when Spiezio was called to pinch hit for Yadier Molina with the bases loaded. Spiezio fell behind the count at 1-2 before not offering at a pitch which Brewers righthander Francisco Cordero and many in Busch Stadium, especially in the Brewers’ dugout, thought was strike three. It wasn’t adjudicated as such.

Spiezio then hooked a triple to right, clearing the bases, and the Cardinals hung on to a 3-2 win that essentially clinched the division.

“I knew I had hit a home run off him (on a breaking ball) earlier in the season,” Spiezio said. “So once I got to two strikes, I was sitting off-speed, away. And he threw that fastball in. It definitely was not over the plate. If, anything, it got the corner. (Umpire Tim Timmons) could have called me out on that. But I’m glad he didn’t.”

Spiezio got that outside pitch he was looking for on the next delivery.

But Spiezio was known for more than just his clutch hitting. He had a “soul patch,” the red tuft of beard Spiezio sported on his chin. “I called it my war paint,” said Spiezio, who had started wearing it as a good-luck charm in Anaheim.

It became a much imitated item for Cardinals fans, who painted their own on their chins. “When I do go down (to St. Louis), I do bring it back,” said Spiezio, who admitted that the patch needs some touch-up because his hair is turning gray.

Boyer found some red lip stain for Spiezio, who determined that it “worked out pretty good,” in his visit to St. Louis, so he also broke it out again for the team picture at a recent fantasy camp. One of the campers asked Spiezio to do his whole beard for him, a request which Spiezio accommodated although he also threw a fright into the man by saying it would be permanent.

“It’s still hard to wash off,” Spiezio said. “But it’s not permanent.”

Spiezio has four children, ranging from Tyler to 7-year-old Sully. The other two, son Cody and daughter Tessa, are in college or on the way next fall.

“I’m just thankful I got sober in time to spend some time with them before they all went off to school,” Spiezio said.

“I’m honest with them. I tell them what to watch out for so that they’re not caught off-guard. It’s real life out there.”

Hummel: What does the future hold for DeJong, Dickerson and Reyes?

The win gave the Mets three in the four-game series.

All 10 of their hits are singles as Wainwright raises his career to 23-7 against Pittsburgh.

With prospect Nolan Gorman at second base, Tommy Edman will move over to shortstop.

The Machine on the mound: Pujols says MLB pitching debut was 'a dream come true'

In his 22nd season in the major-leagues, Cardinals slugger Albert Pujols made a surprising pitching appearance

Cardinals' Reyes must deal with another setback

Right-hander feels soreness in shoulder and has an MRI. A second opinion is next but he has a long road to traverse again.

Mets schedule a doubleheader Tuesday between teams that got into a shoving match at the end of series in St. Louis, leading to two Cardinals suspensions.

In his first start of his final regular-season visit to Queens, Pujols moves ahead of Eddie Collins, per Elias. He talks about mentoring, memories, and his future.

Ed Spiezio, during a workout at Busch Stadium in the 1960s. (Post-Dispatch archives)