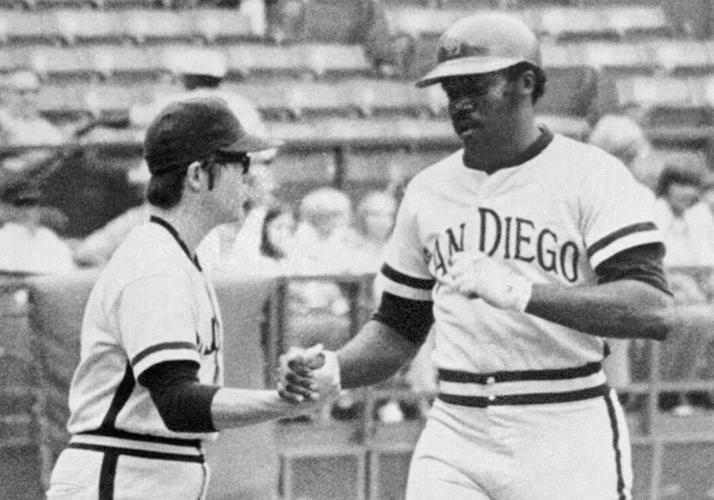 Nate Colbert, right, of the San Diego Padres, gets congratulations from a batboy at Atlanta Stadium after one of his record tying five home runs in the doubleheader with the Atlanta Braves at night on Tuesday, August 2, 1972. The Padres swept the doubleheader 9-0 and 11-7. Colbert hit two homers in the opener and three in the nightcap, one a grand slam. His five homers tied a record by Stan Musial and his 13 runs batted in broke the major league record of 11 for a twin bill. 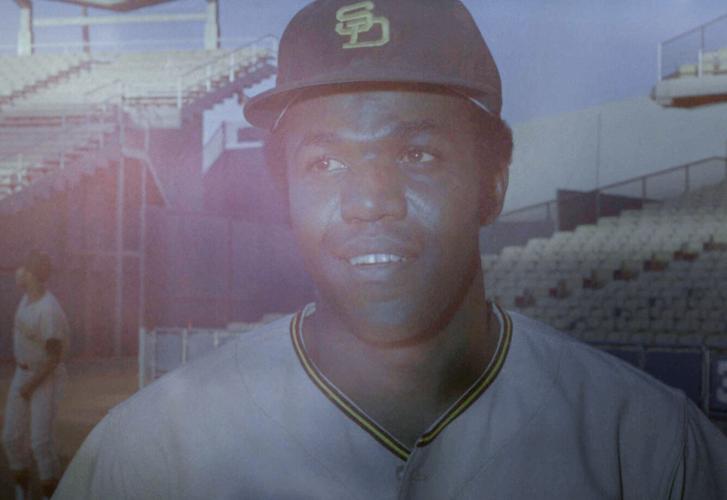 The St. Louis kid who saw Stan Musial make history and then matched him as a major leaguer with one of the most remarkable days ever for a hitter, Nate Colbert died on Thursday.

Colbert, a Sumner High graduate and San Diego Padres Hall of Famer, was one of the original Padres and led the team in home runs its first five seasons. A three-time All-Star, Colbert hit 38 home runs and had 111 RBIs in 1972 to finish eighth in MVP voting. His death was confirmed by the Colbert family and the Padres. The cause of death was not given.

“It is with great sadness that his family announces the loss of San Diego Padres Hall of Fame and three-time All-Star Nate Colbert,” the family shared in an email to the Post-Dispatch. “He passed away peacefully at his home in Las Vegas … surrounded by his loving wife Kasey and his children.”

Born April 9, 1946, in St. Louis, Colbert went to high school a five-minute drive from Sportsman’s Park, and at age 8 he attended a doubleheader between the Cardinals and New York Giants.

That day, May 2, 1954, Musial became the first major leaguer with five home runs in a doubleheader, starting the day with three homers in Game 1. With Colbert in the crowd and about to be inspired to play baseball, Musial had six hits total in the doubleheader and nine RBIs.

The thunderous afternoon was unmatched until August 1, 1972. That day, in Atlanta, Colbert echoed Musial’s five homers in a doubleheader and set a record that remains with 13 RBIs. Colbert’s three-home game came in Game 2 of the doubleheader, and one was a grand slam.

His 22 total bases were one more than Musial’s 21.

“I was in Busch Stadium that afternoon,” Colbert said years later, according to the San Diego Padres Encyclopedia. He referenced the name of Sportsman’s Park as Busch Stadium I. “I never thought anyone would equal that record, certainly not me.”

Colbert signed his first contract out of high school with the hometown Cardinals in 1964 and spent two seasons in the organization, slugging 12 home runs and reaching Class A before Houston selected him in the Rule 5 draft.

He made his big-league debut in 1966 and appeared in 39 games for the Astros from 1966-68 before San Diego, a new club, took him 18th overall in the expansion draft. He quickly became the Padres’ first star player, and Colbert remains San Diego’s all-time leader in home runs with 163. (Tony Gwynn has 135, Adrian Gonzalez 161, and no active Padres player is within 50 of Colbert’s record.)

From 1969 to 1972, Colbert’s 127 home runs matched Reggie Jackson’s total and ranked sixth in the National League behind such luminaries as Hank Aaron, Johnny Bench, Willie Stargell, and Billy Williams. He was selected as an All-Star three times while with the Padres before a trade to Detroit in November 1974.

“He would jump on a fastball,” Hall of Famer Dave Winfield told the San Diego Union-Tribune on Thursday. “He’d get frustrated when they’d throw him so many curveballs. He’d make me laugh. He’d take his gum out of his mouth and throw it out to the mound. He’d holler, ‘Throw me a fastball.’”

Colbert retired after playing for Montreal and Oakland in the majors during the 1976 season. He finished with 173 homers, 520 RBIs, and a .451 slugging percentage in 1,004 games in the majors.

After his playing career, Colbert had a variety of roles with the Padres, including minor-league instructor and member of the team’s community relations department.

Colbert was inducted into the team’s Hall of Fame in 1999 at the same time as Ray Kroc, the Padres’ owner and famed McDonald’s magnate.

“We are deeply saddened by the passing of Padres Hall of Famer Nate Colbert,” San Diego chairman Peter Seidler said in a statement released by the team. “Our hearts go out to his wife, Kasey, and the entire Colbert family at this very difficult time. An original member of the Padres in 1969, Nate was a trailblazer in the San Diego sports community. … Nate was devoted to his community off the field as well, dedicating his time to disadvantaged youth through his ministry. He was a magnetic person who will be dearly missed.”

In 1989, Colbert was one of at least 30 celebrated alumni from baseball, basketball, and football teams present for the anniversary of the Mathews-Dickey Boys’ Club in St. Louis.

The family said a memorial is planned in St. Louis for some time in spring.

A month after their big-splash signing, Cardinals have not made another transactions. But there's talent still available, including lefties to…

Goold: Outfield production from the Cardinals is a curiosity

Whether sharing a meal with a successful manager, gathering with a flock of coaches to discuss evolving hitting approaches, or encountering an…

Matthew DeFranks is on the Blues beat, Lynn Worthy will be covering the Cardinals

Nate Colbert, right, of the San Diego Padres, gets congratulations from a batboy at Atlanta Stadium after one of his record tying five home runs in the doubleheader with the Atlanta Braves at night on Tuesday, August 2, 1972. The Padres swept the doubleheader 9-0 and 11-7. Colbert hit two homers in the opener and three in the nightcap, one a grand slam. His five homers tied a record by Stan Musial and his 13 runs batted in broke the major league record of 11 for a twin bill.