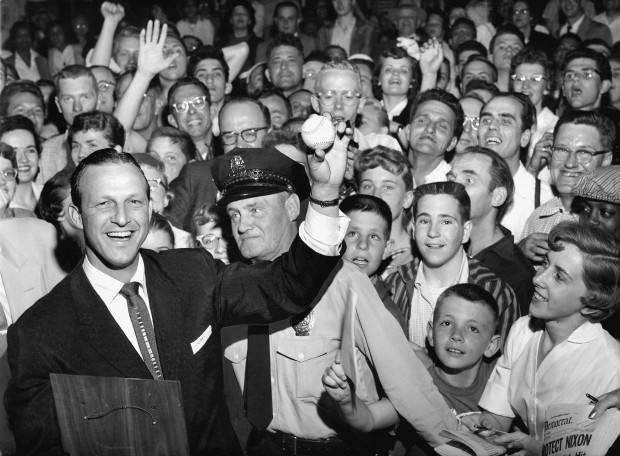 MAY 13, 1958- Holding high the baseball that figured in his 3000th hit, Stan Musial responds happily to a noisy reception by fans at Union Station. The crowd gathered early to greet the 11:15 pm arrival of the train from Chicago, bringing the Cardinals home after a successful 2-day trip. Musial, batting in place of Sam Jones, hit a double that drove in a run in a winning rally. The Redbirds won 5-3, for their sixth straight triumph. Keeping the crowd in check is Patrolman Joseph F. Haney of Central District. photo by Post-Dispatch 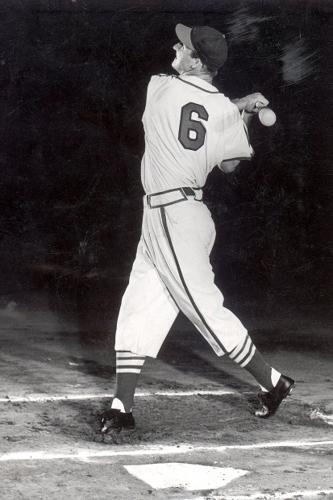 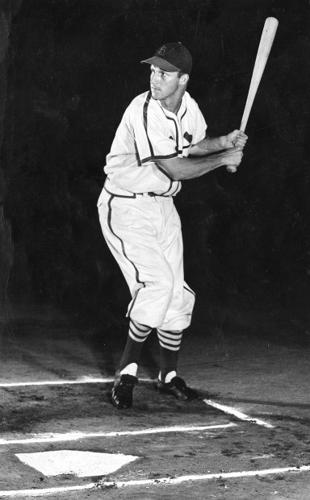 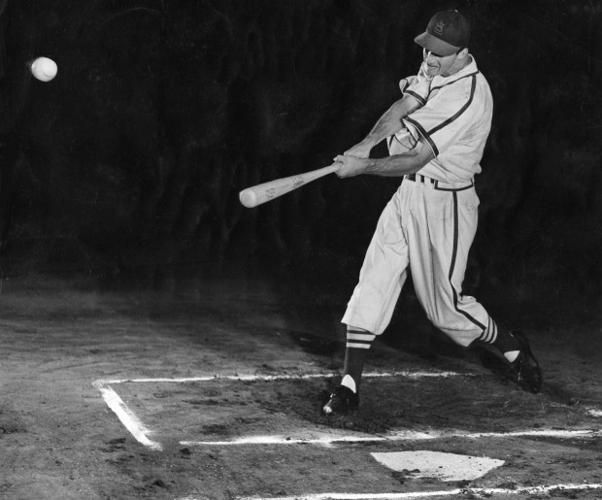 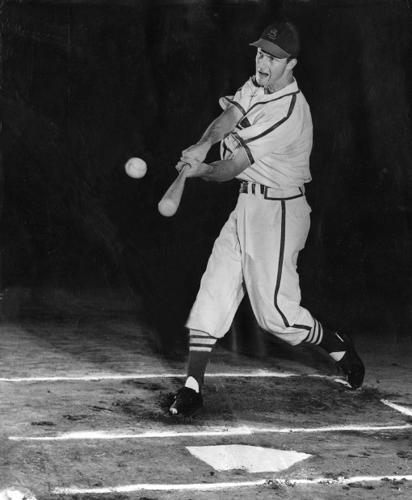 Editor’s note: The following is a story about Stan Musial’s 3,000th hit on May 13, 1958, written by the late Bob Broeg, former Post-Dispatch Cardinals writer/columnist/sports editor.

Stan Musial, a dramatic artist exceeded by few at the difficult science of solidly meeting a round ball with a round bat, today turned toward another tremendous baseball challenge – a .400 season – after having become only the eighth player in history to achieve 3,000 hits.

A happy Musial, leading grinning Cardinal teammates back into town after a series sweep at Chicago, couldn’t talk in detail about .400, an average last reached in the major leagues by Ted Williams 17 years ago and by no National Leaguer since Bill Terry in 1930.

Musial, who was only 10 when Terry hit .401 for the Giants, expressed himself with the caution of a 37-year-old veteran who at last climbed the Matterhorn and then was asked what he thought of Mount Everest.

“It’s really too early to think about .400,” said Stan the Man after his dramatic appearance at Wrigley Field, where his sixth-inning pinch double set up a four-run rally that gave the Redbirds a 5-3 victory.

“I don’t think you seriously talk .400 until about midseason, around the time of the All-Star Game,” Musial went on. “And then I believe, figuring second-half fatigue, you’d have to be close to .450 to make it.”

Others in the Cardinals traveling party, which happily rode the rails back into town last evening, expressed belief that despite his advanced baseball age, a physically remarkable Musial could reach a goal he always has given considerable respect. The consensus of coaches and players was that The Man could bat .400 if he hits enough to left field and doesn’t pull to right for home runs too much.

Musial, looking forward optimistically to as he put it “at least” two more seasons beyond this one, said he hoped to finish with the most hits in National League history. The record of 3,430 was set by the late Honus Wagner. If The Man gets that far, he well might pass Tris Speaker (3,515) and finish second only to Ty Cobb in hits as well as runner-up to Babe Ruth in extra-base blows.

Of the players with 3,000 hits, none built the slugging reputation that Musial has. Significantly, none of the five players ahead of Stan in home runs – Ruth, Jimmie Foxx, Mel Ott, Lou Gehrig and Ted Williams – reached 3,000 hits. And even taking into account differences in eras, no previous 3,000-hit player ranked as a home-run hitter.

Musial, getting there earlier in his career than any of his seven illustrious predecessors, paid tribute to Cobb, Speaker, Paul Waner, Wagner, Eddie Collins, Napoleon Lajoie and Adrian “Cap” Anson.

“Ranking with such great hitters helps make this my greatest thrill, even more than my seven batting championships or the Player-of-the-Decade award,” Stan said.

Musial’s 3,000th hit, like his first one back there Sept. 17, 1941 off Boston’s Jim Tobin at Sportsman’s Park, was a double, a species toward which Stan the Hundred Grand Man has shown great affinity. He needs only 30 more to break Wagner’s National League record for two-base blows.

The BIG one came off Moe Drabowsky, 23-year-old Chicago righthander, and it set up a four-run Redbird rally that turned a 3-1 deficit into the latest victory over the club that so often called the Cardinals “cousins,” but which now must yield to and with a respectful “uncle.”

As anyone this side of the Russian steppes knows by now, manager Fred Hutchinson had intended to use Musial only if needed, hoping that Stan could wait to deliver his historic hit in St. Louis, the star’s adopted home.

By the time the Cardinals batted in the sixth, though, the Redbirds were two runs behind Drabowsky, who had overcome a butter-fingered defense but yielded a leadoff double to Gene Green. Even before Hal Smith grounded out, famed No. 6 was striding in from the right-field bullpen, where he had been sunning himself.

Musial’s appearance brought a lusty roar from the crowd of 5,692, and the fans stood and applauded as the outstanding lefthanded hitter in his league’s history laced a 2-2 curve into the left-field corner for a run-scoring double.

The scene that followed looked a lot like one from the old Keystone Kops. Photographers ordinarily barred from the field poured out of the stands onto the diamond. Third-base umpire Frank Dascoli claimed the ball as it was returned to the infield and trotted over to hand it to Musial and to shake his hand.

Hutchinson lumbered out of the first-base dugout, photographers in pursuit, and posed with the old meal-ticket at second base. In the excitement, ol’ Hutch pulled a rock. He waved in Frank Barnes as a pinch-runner, forgetting for a moment that with the 3,000-hit goal reached, the reason for which Musial had been withheld no longer existed.

Fortunately, Musial wasn’t needed again. ... By the time Billy Muffett took the mound for a handsome four-inning scoreless relief effort, Musial and wife Lil, who had made the trip to Chicago with a handful of close St. Louis and Pennsylvania friends, were watching the cameraman’s birdie at the box seat next to the visiting dugout.

Newsreel, TV and still photographers took over on the field again after the game before the Cardinals and Musial’s group hurried to a train for St. Louis. There was a celebration during the noisy ride, with the Illinois Central providing a cake on which “3000” hastily had been inscribed in red frosting. And broadcaster Harry Caray presented Stan with a pair of diamond-set cuff links in a theme cleverly commemorating the milestone.

En route, Musial left the train diner at Springfield, Ill., to sign autographs on the platform for about 100 well-wishers. Here, at Union Station, it appeared that more than 1,000 persons were gathered, including club vice-president Dick Meyer and general manager Bing Devine, to cheer The Man and the victorious Cardinals. Both there and here folks acted as though the Pied Piper of basehits still might lead the Cardinals into the thick of the pennant race.

As The Man himself said, “This has got to be a pretty good ballclub. It’s winning now with (Al) Dark, (Del) Ennis and Musial on the bench.”

From Bob Broeg to Joe Strauss: Tributes to Stan the Man

Reinforcements Freeman, Rondon arrive from Memphis. With Lyons going on the DL, Cards could use Garcia to start by Saturday.

Stan Musial is inducted into the baseball Hall of Fame

Editor’s note: The following is a story about Stan Musial being inducted into the Baseball Hall of Fame on July 28, 1969, written by the late …

Thank you, Commissioner Kuhn, Mr. Frick, Mr. Cronin, Mr. Joss, members of the Hall of Fame. I appreciate all the fine, kind words that Commiss…

MAY 13, 1958- Holding high the baseball that figured in his 3000th hit, Stan Musial responds happily to a noisy reception by fans at Union Station. The crowd gathered early to greet the 11:15 pm arrival of the train from Chicago, bringing the Cardinals home after a successful 2-day trip. Musial, batting in place of Sam Jones, hit a double that drove in a run in a winning rally. The Redbirds won 5-3, for their sixth straight triumph. Keeping the crowd in check is Patrolman Joseph F. Haney of Central District. photo by Post-Dispatch