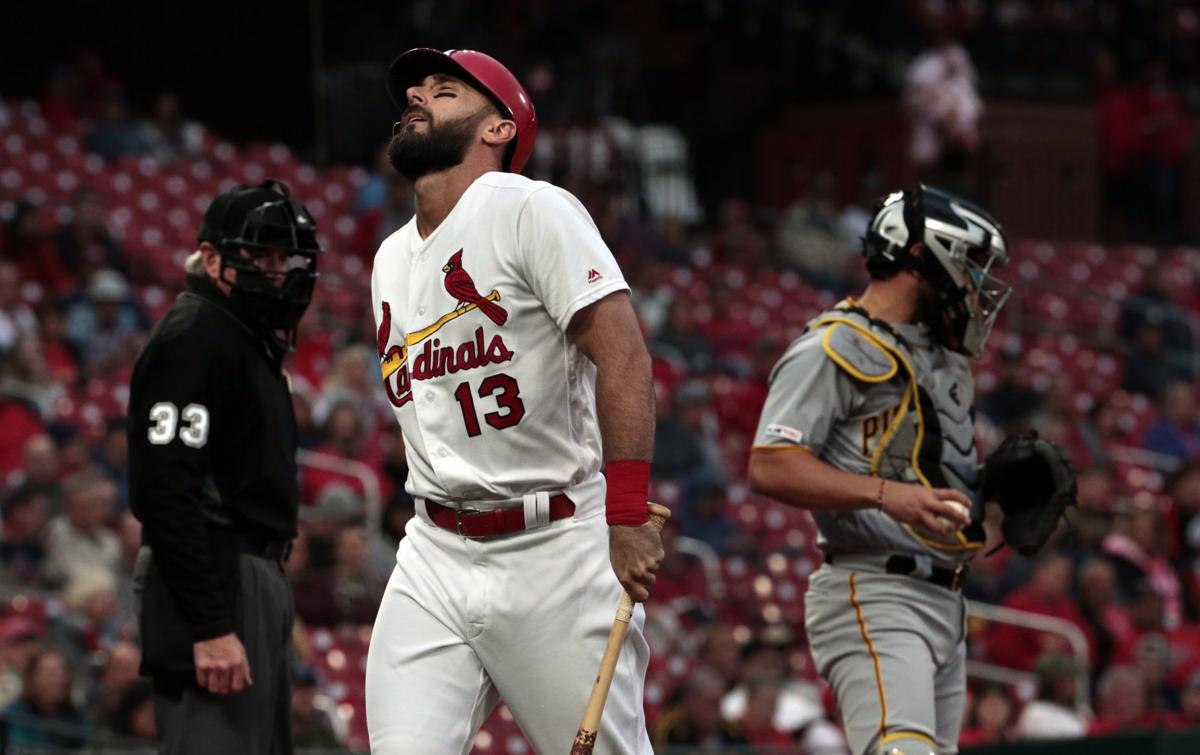 St. Louis Cardinals Matt Carpenter takes a foul off his leg, walking it off in the first inning against the Pittsburgh Pirates on Thursday, May 9, 2019 at Busch Stadium. Photo by Robert Cohen, rcohen@post-dispatch.com.

Matt Carpenter walks off the pain from a ball fouled off his leg last season against the Pirates at Busch Stadium.

SAN DIEGO — As the Cardinals survey their roster for ways to revitalize an offense, one glaring area where they’re actively looking to add strength is from the lefthanded batter’s box.

They’ve already started with their most prominent lefthanded hitter.

After undergoing a series of physical exams at the end of the season, Matt Carpenter, the former All-Star leadoff hitter, has started an offseason program the club hopes will help him regain some of the weight and strength he lacked throughout this past season. Carpenter, 34, had a career-low .226 average and .726 OPS as well as a drop in his bat’s exit velocity — all of which prompted the Cardinals’ performance department to search for causes. John Mozeliak, president of baseball operations, said tests suggested it was Carpenter’s inability to maintain weight and strength.

“When you look at last year vs. the year before, one of the things that I think stood out from the year was just his exit velocity,” said Mozeliak, referencing the speed of the ball off Carpenter’s bat. “He was hitting into some really bad luck in 2018. In 2019 (it) was a little different when you really peel back the onion. The more we looked at it, the more we felt like we needed to change what he was doing in the offseason to help him prepare for 2020. Our optimism is high on it. We’ll find out.”

The Cardinals arrived at this week’s winter meetings in San Diego aware that the accelerating pace of the market could force them to be “nimble” and “reactive,” but steadfast in their belief that an improved offense must come from within. They acknowledge it would certainly help if it also came from the left. Manager Mike Shildt said this past week that he has a “strong reason to believe” that Carpenter will rebound from a difficult season, and his offseason work has been offered as a reason. Carpenter’s revival would add some of the lefthanded production the Cardinals seek. A trade could add the rest.

As an example, Mazara, 24, is arbitration eligible and has two years of control remaining. In any deal, the Cardinals would aim to have a better balance of control years and cost because the righthanded hitting outfielders they have to deal all have at least four years of control. The Dodgers would entertain offers for lefthanded-hitting outfielder Joc Pederson, though with 109 plate appearances against lefthanded pitchers in the past two seasons he’s been most prosperous in a platoon situation. The Cardinals would prefer an everyday answer.

“If we could find a way to get a little more lefthanded, we would be encouraged to do that,” Mozeliak said in the team’s suite Monday night. “So, I think people feel that they’re a little too lefthanded then it might make sense for us to be talking. But then you have to match up. Does the trade make sense for controllable (years), what they are making financially? We haven’t come to a meeting of the minds on that.”

A trade is more appealing than a free-agent lefthanded hitter, Mozeliak said.

Even as the free-agent market warms, the trade talks have been glacial.

“I would say slow,” he added. “Nothing is developing that quickly.”

As the National League Central champs, the Cardinals were the only one of the 10 playoff teams to rank outside of the top half in slugging (.415, 23rd in the majors) and OPS (.739, 21st). Against righthanded pitching, the offense scuffled even worse, slugging .412 (24th) and producing a .733 OPS (20th). As a group, the Cardinals’ lefthanded hitters slugged .420. That ranked 10th in the National League and was well below the .442 MLB average. A contributing factor to that lack of pop from the left side was Carpenter.

He, Kolten Wong, and Class AAA outfielder Justin Williams are the only lefthanded hitters on the current roster, with Tommy Edman and Dexter Fowler offering switch-hit looks. Carpenter’s production against righthanded pitchers sank from .930 OPS and a .548 slugging percentage in 2018 to just .737 OPS and .405 slugging this past summer. An illness early in the season and back soreness may have been contributing causes. The 200-point drop in his OPS corresponded with the lull in his exit velocity that informed the team’s tests. Carpenter had an average exit velocity on balls in play of 87.2 mph in 2019, down from 89.6 mph in 2018. His average on line drives slipped from 94.4 mph in 2018 to 91.9 mph in 2019.

“He’s one of these men that has changed how he’s trained over time,” Mozeliak said. “He’s also a very disciplined eater, and how he thinks about fueling his body. To some level, he’s one of those types of players that has a hard time holding weight. So one of the things that we’ve tried to do this offseason is a strength program that will work for him so he can maintain that. And then as the season unfolds it’s something that we’re going to have to be very conscious of to try and keep that on.

“I wouldn’t be talking about it if I thought this was a longshot.”

Mozeliak said a member of the team’s performance department and training staff has been in touch with Carpenter, and they’re encouraged by the early stages of the plan. He also cautioned that there are two months before spring training for there to be real results, not introductory planning.

As the Cardinals wheezed offensively this past summer, they found that having a lot of similar, righthanded hitters meant opponents could take a lot of similar approaches with the team. They are prepared to go into the season letting young outfielders like Lane Thomas, Tyler O’Neill, Randy Arozarena and Williams complete for playing time during spring training, but three of the four are righthanded, and so is incumbent center fielder Harrison Bader. The productive revival of their leading lefthanded hitter, Carpenter, would add the welcome sock from the left side. The addition of another lefthanded hitter in addition Carpenter would “be nice to have a little more flexibility,” Mozeliak said.

From the left, they need a familiar look — and would welcome a new look.

“It’s sort of a wish list. Wishes, as being defined, can change,” Mozeliak said. “I feel like most winter meetings we’ve tended to have something that we were chasing. This year, I think it’s a compliment to our club. We like the players we have. And that’s a good thing.”

Quick Hits: DeWitt and front office too close? New deal for Flaherty? 'MadBum' in the mix? Peralta in LF?

Was it a mistake to pursue Goldschmidt instead of Harper? Is Carlos bound for the bullpen — or another team? No turning back on the Carp commi…

Before hitting the weights to get stronger, Carpenter recognized he waited too long to 'mentally adjust'

'I could go out and make excuses and search for them, but I have to chalk this up as not having a good season, and just not putting it together at all. I started to struggle and didn’t get it back,' says the Cardinals infielder and former All-Star.

St. Louis Cardinals Matt Carpenter takes a foul off his leg, walking it off in the first inning against the Pittsburgh Pirates on Thursday, May 9, 2019 at Busch Stadium. Photo by Robert Cohen, rcohen@post-dispatch.com.

Matt Carpenter walks off the pain from a ball fouled off his leg last season against the Pirates at Busch Stadium.