Sweetest 16: Cardinals capitalize on Cubs’ gifts, dodge drama in ninth for 4-2 win, their 16th consecutive
0 comments
Share this
{{featured_button_text}}
1 of 4 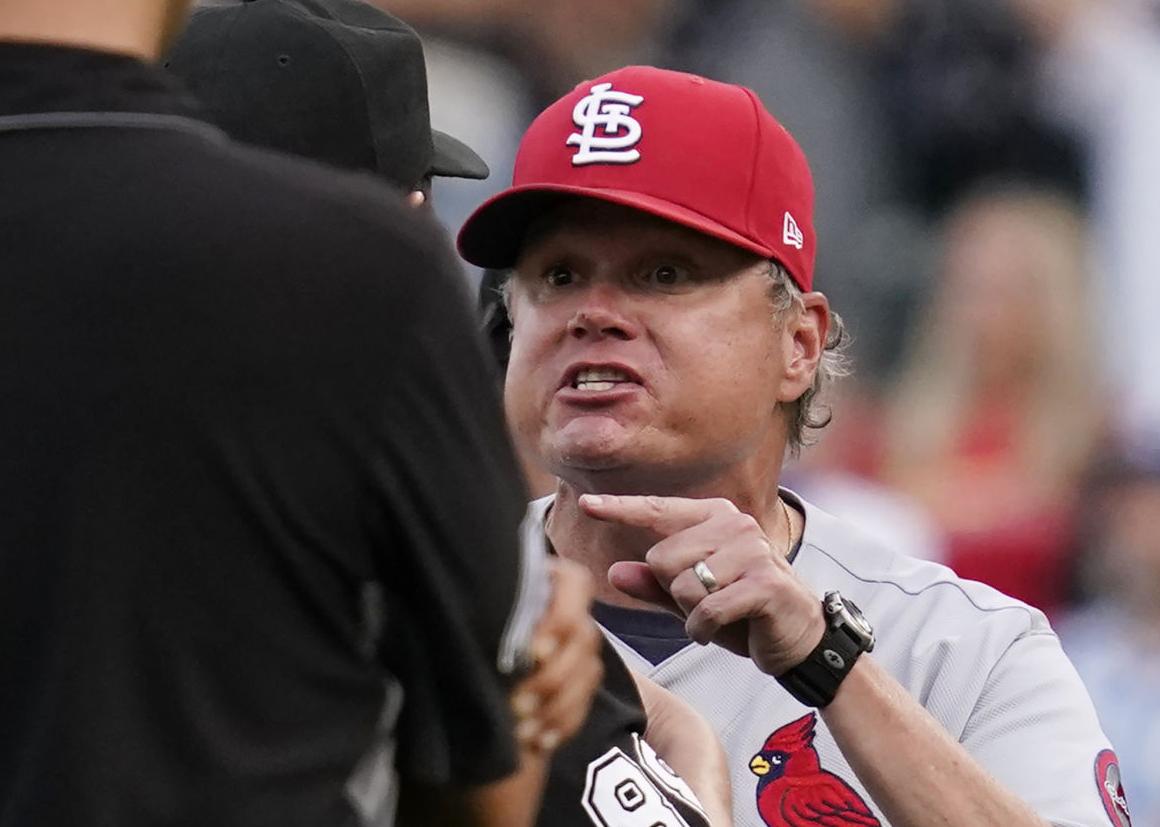 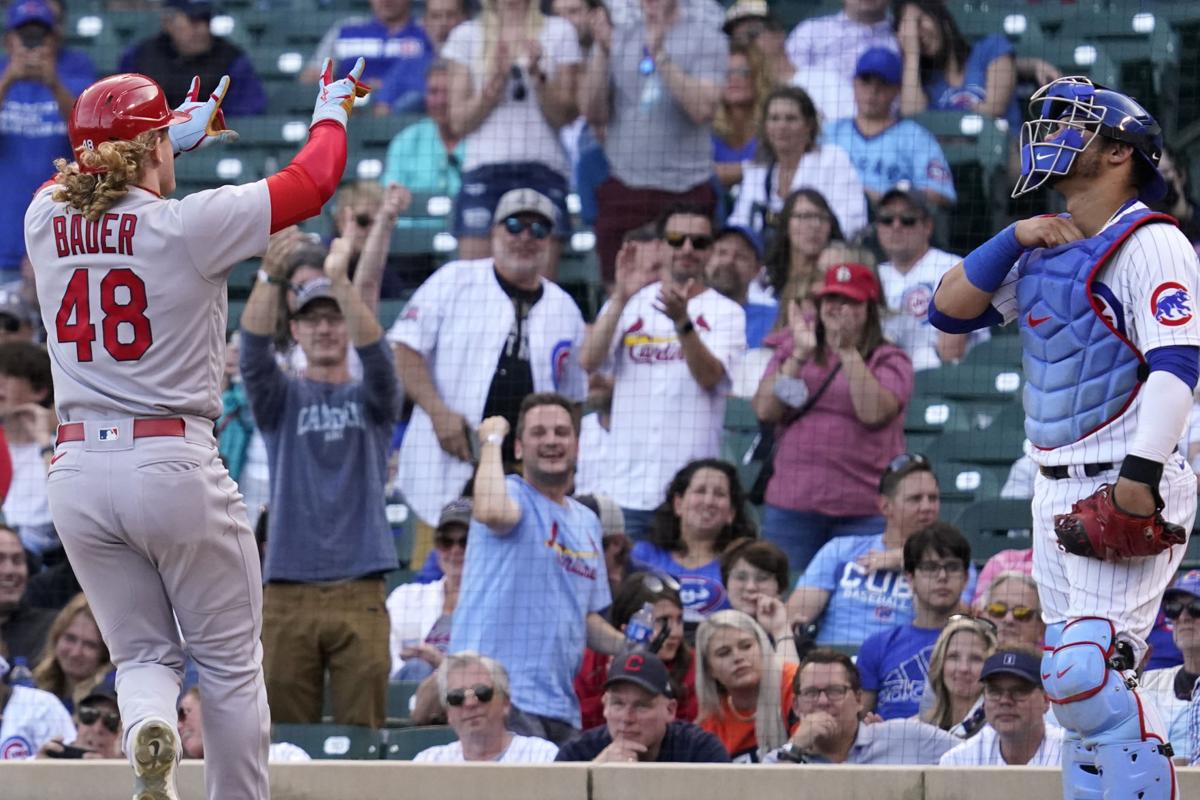 The Cardinals' Harrison Bader, left, celebrates after hitting a solo home run in the eighth inning Sunday afternoon in Chicago. 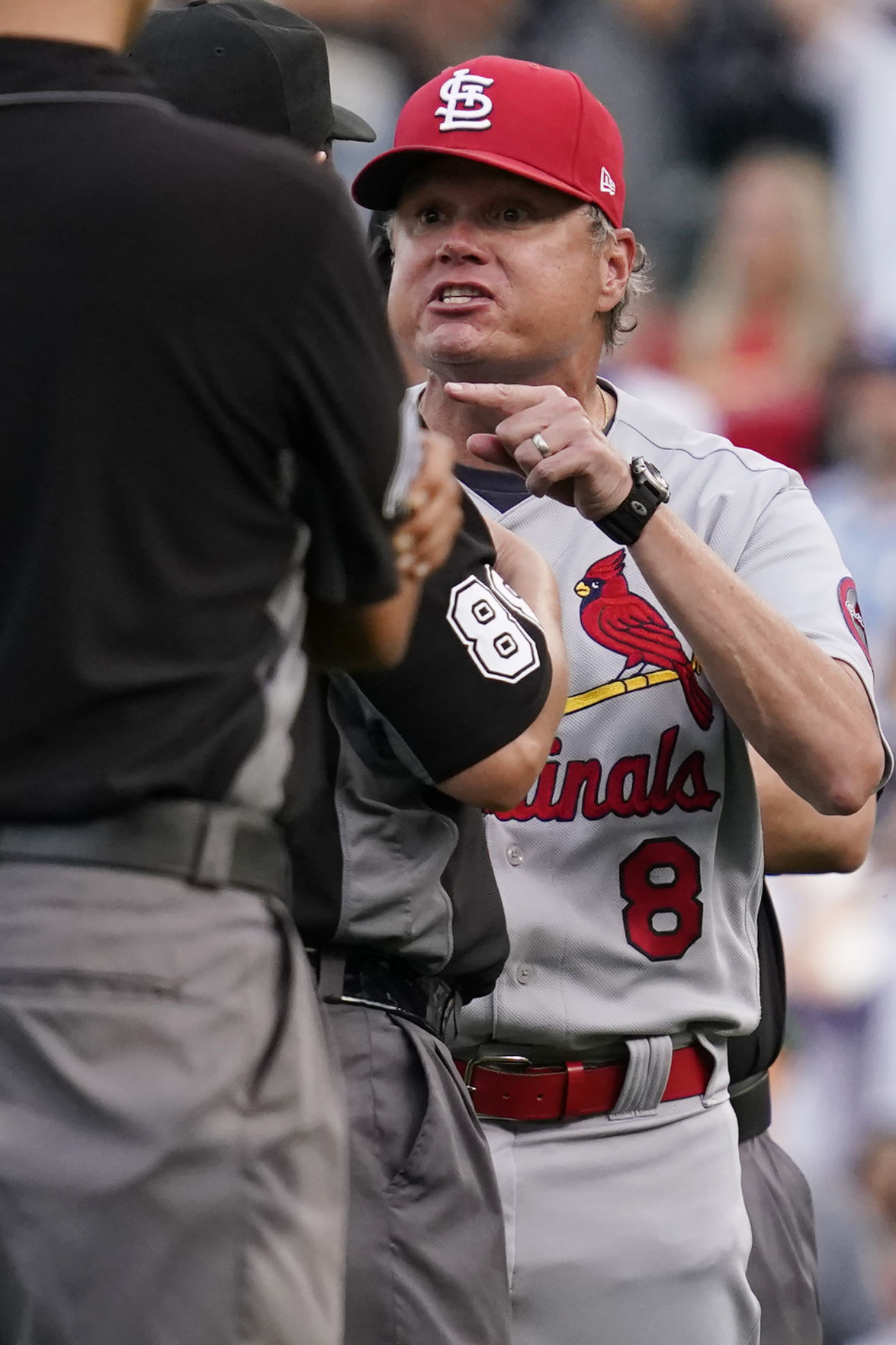 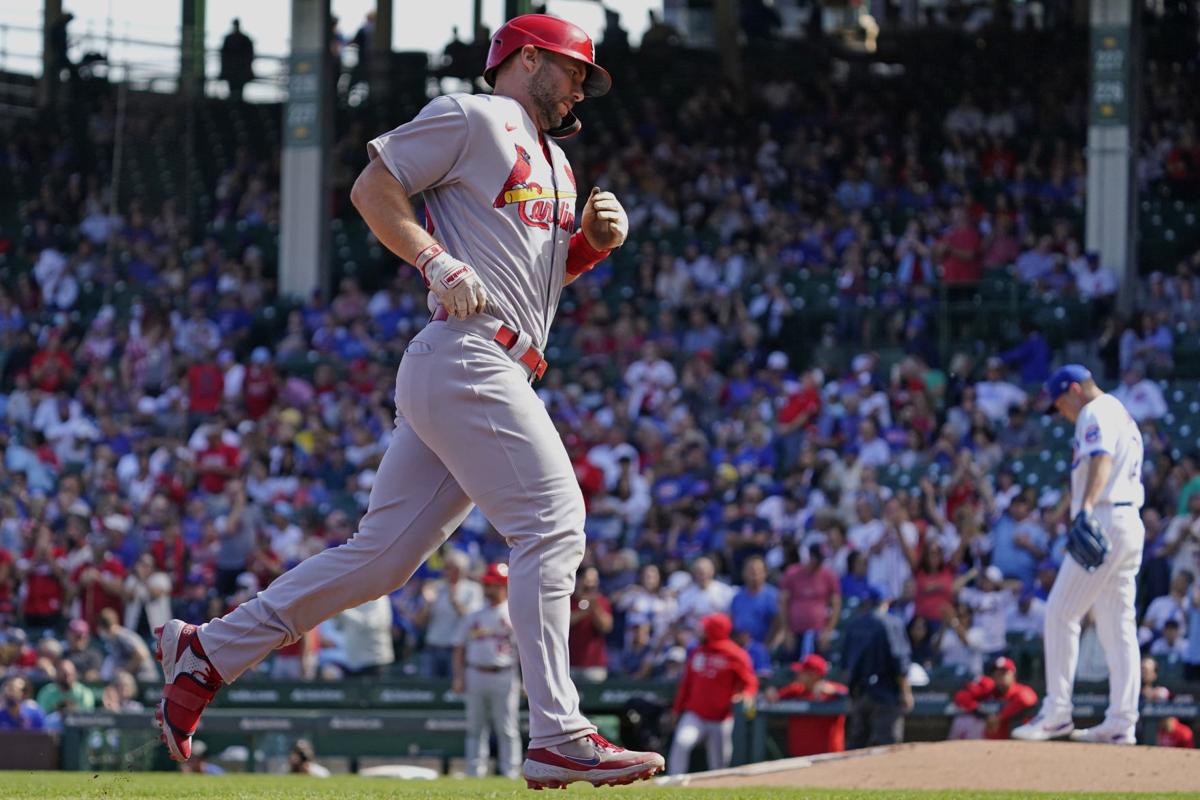 The Cardinals' Paul Goldschmidt rounds the bases on his solo home run in the third inning Sunday in Chicago.

CHICAGO — When the chaos calmed, every argument had been exhaled and exhausted, and their manager ejected, an umpire’s confused call on an infield-fly rule took the final out of Sunday’s game away from the Cardinals and instead left them dealing with the tying run at second base.

Four pitches later, they got the last out.

When a team hasn’t lost a game in weeks, it’s hardly fazed when it has to win one twice within a few minutes.

The Cardinals’ 4-2 victory against the Cubs on Sunday extended their record winning streak to 16 consecutive and put themselves one win shy of securing the National League’s second (and final) wild-card playoff berth as the season starts its final week.

The Cardinals rallied with Harrison Bader’s game-tying homer that carried over the wall and two runs scored in the ninth inning without a ball leaving the infield. The victory concluded the Cardinals’ road schedule with 11 consecutive wins — the first team to finish with that many since 1887, per Elias Sports — and closed Wrigley Field for the winter with a four-game sweep.

“Finally, now, maybe at the most important time of the season, we’re putting everything together,” said catcher Andrew Knizner, who scored the tiebreaking run in the ninth. “We’re really locked in. We’re playing good baseball. We’re playing all the way through the ninth inning, until the last pitch.”

Or evidently beyond, if necessary.

Closer Giovanny Gallegos walked two batters to invite the winning run to the plate in the ninth. Cubs first baseman Frank Schwindel, a .333 hitter since replacing traded Anthony Rizzo, skied a ball high toward third base and up into the Wrigley wind. The popup veered from foul territory toward fair territory. Things got weird. An umpire clearly and correctly signaled the infield-fly rule. Nolan Arenado drifted with the ball, lost his footing and fell as the ball dropped in fair territory. Schwindel was out by rule. But the two runners had the right to advance — at their own risk. Both tried.

The Cardinals threw the ball to third base as if to get a force out that was not possible, by rule, and then to Tommy Edman at second. A force out wasn’t possible there either, only tag plays. But when Rafael Ortega coasted past second as if he was out on a force play, Edman tapped him with the glove. Umpire Doug Eddings called Ortega out — then quickly signaled as if time had been called. Cardinals first baseman Paul Goldschmidt vehemently pointed to the out Edman had taken after encouraging his teammates to make the tags. The Cardinals — who have made such double plays an artform — thought they had pulled off another one for the final outs.

Elsewhere on the field, an umpire claimed he had called time — during a continuing play.

Asked by the media present at Wrigley to explain this decision and the play to a pool reporter, the umpires declined.

“There’s a lot going on in that play,” Cardinals manager Mike Shildt said. “The infield-fly rule always seems to give people pause. What’s going on with the runners? Is it live? Is it dead? Do you have to tag him? We had a lot of chaos taking place. Heads up baseball play. ‘Eddy’ tagged Ortega. They had deemed the play dead, at that point it’s dead.”

The Cubs’ rally was alive.

Shildt argued with the umpires for several minutes before being ejected, and then bench Oliver Marmol took up the cause. When the game resumed, Gallegos faced Ian Happ with two outs, two runners in scoring position, and the need to get a third out for the second time. It took the Cardinals’ closer four pitches to strike Happ out, secure his 13th save, his 11th of September, and tell Wrigley to wait till next year.

“The emotion,” Shildt said. “The game is over. Oops, it’s not. Next thing you know you’ve got second and third, tying run at second. That’s Gio. That’s one of the reasons he’s good at the back end of the game. Slow heartbeat.”

The entire game had that steady pulse. Goldschmidt sent the Cardinals to a 1-0 lead with a 464-foot homer that was the second longest hit at Wrigley this season.

The Cubs rallied for two runs in the fourth inning against rookie Jake Woodford. The go-ahead run scored on a sacrifice fly. Woodford, who will be prominent in the coming week as the rotation sets up for the playoffs, pitched 5 1/3 innings, relied on his defense in a blustery day at Wrigley, and earned praise from Shildt for being able to “figure out a way, figure out another pitch, figure out a way to get an out. Seeing him mature before your eyes.”

The tag-team of Cubs starter Keegan Thompson and former starter Adbert Alzolay held the Cardinals to one run through the seventh inning. The Cardinals relief duo of Andrew Miller and Kodi Whitley froze the deficit at one, buying time for a rally. Bader tied the game in the eighth with his third homer in as many days and the Cardinals’ 13th of the series. The Cardinals’ center fielder finished the weekend with 10 hits, six for extra bases.

In the top of the ninth, the confines got even friendlier.

After all, what’s a Sweet 16 without gifts?

Knizner drew a leadoff walk from Cubs reliever Codi Heuer. Back-to-back bunts put Lars Nootbaar on base and he and Knizner in scoring position. Heuer intentionally walked Goldschmidt to face Tyler O’Neill. In the span of six pitches, the Cardinals had the lead. Knizer scored on a wild pitch, and Nootbaar was safe when Heuer juggled a gimme-putt grounder to the mound before settling for the out at first base. Five batters into the inning and not one ball got past the infield grass, but the Cardinals had a 4-2 lead.

“Wrigley has got a weird brick backstop that is kind of angled funny,” Knizner said of his tiebreaking run. “So you just have to make sure it kicks off far enough to score. And it did.”

The Cardinals had a slim chance of clinching a playoff invite Sunday, but it would have required their win and losses from Cincinnati, Atlanta, and Philadelphia. The Brewers claimed the National League Central crown with a win at home Sunday, leaving one and only avenue into the postseason for the surging Cardinals (87-69) — as the second wild-card team. And their magic number for clinching that is one, for the right to travel to face either the Dodgers or Giants in a one-game playoff.

The Cardinals swept their fourth consecutive series and join the 1887 Philadelphia Quakers as the only teams to finish a road schedule with at least 11 consecutive wins. No team has won this many consecutive games in September since 1935, and no National League has had a winning streak this long at any point a season since the 1951 Giants. That’s why the Cardinals did not have any stage fright as the fog lifted from the botched infield-fly call, the arguments all around his mound dispersed, and Gallegos saved the umpires as well as the game. He got back to the only show the Cardinals know.

Winning once, sometimes twice a day.

“So much change of emotion in a short period of time (and) some guys can lose it mentally, which then physically they’re not able to pitch and kind of give it up,” Knizner said. “He’s a cool dude, cool in the head. Nothing ever fazes him.”

Nothing now fazes them.

Veteran lefty departed shortly after meeting with a trainer on the mound, but reviews of an undisclosed soreness Sunday left team encouraged.

Wild ride: The words behind the 17 wins as Cardinals clinch the wild card

From Nolan Arenado's statement homer vs. Cincinnati to Rick Hummel's statement headline after win vs. Padres, here is the Post-Dispatch's game coverage of the record streak.

UPDATE: Yadier Molina scratched from what would be the 305th start together with Wainwright. Knizner will start.

Scenes from the Cardinals sweep at Wrigley

Andrew Knizner scored the go-ahead run on Codi Heuer's wild pitch in the ninth inning, and the Cardinals beat the lowly Chicago Cubs 4-2 on Su…

The Cardinals' Harrison Bader, left, celebrates after hitting a solo home run in the eighth inning Sunday afternoon in Chicago.

The Cardinals' Paul Goldschmidt rounds the bases on his solo home run in the third inning Sunday in Chicago.