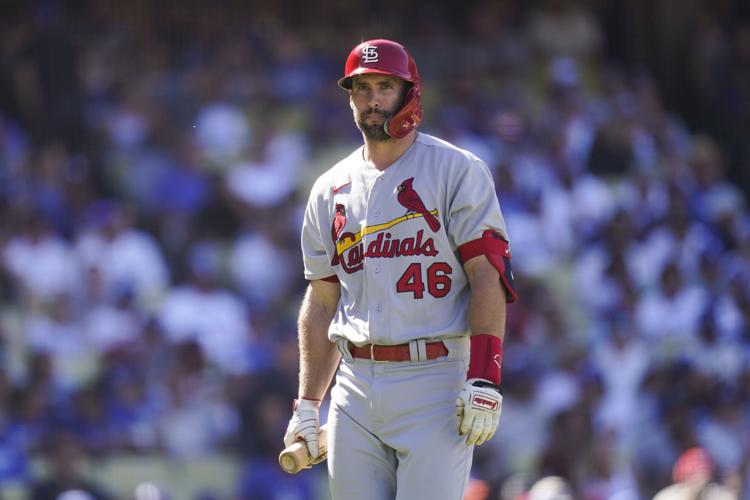 The Cardinals' Paul Goldschmidt walks back to the dugout after striking out in the sixth inning against the Dodgers on Sunday, Sept. 25, 2022, in Los Angeles. 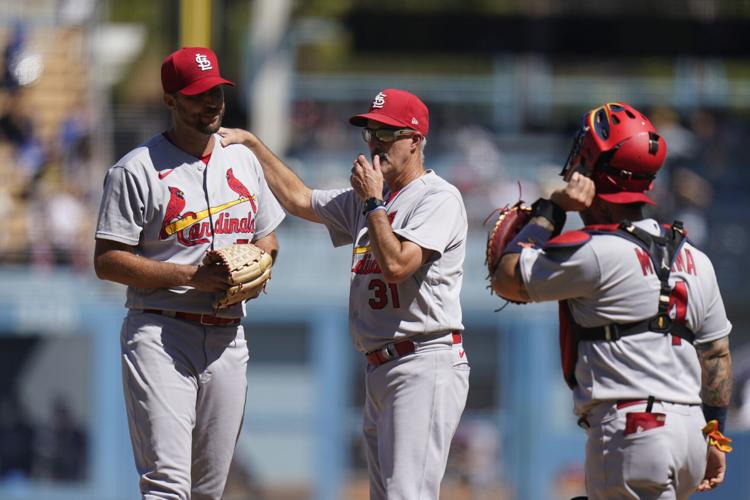 Cardinals starting pitcher Adam Wainwright, left, chats with pitching coach Mike Maddux, center, in the first inning of a game against the Dodgers on Sept. 25, 2022, in Los Angeles. 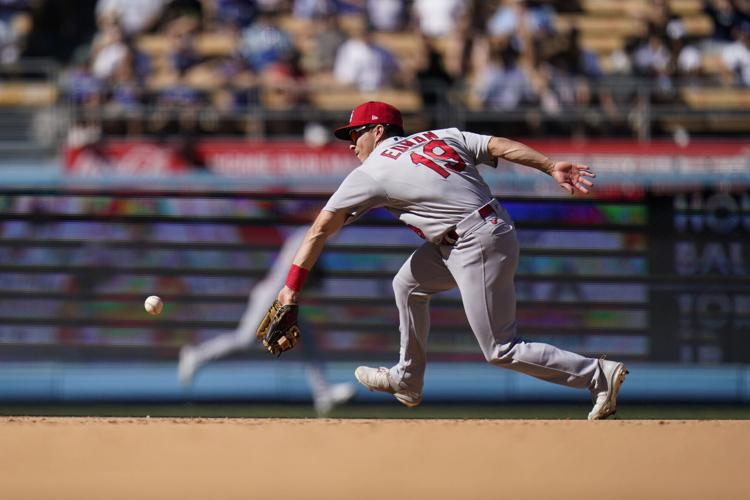 The Cardinals' Tommy Edman fields a ground ball hit by the Dodgers' Gavin Lux in the sixth inning on Sept. 25, 2022, in Los Angeles.

LOS ANGELES — The curveball doesn’t feel like it’s spinning with the usual wickedness, the cutter seems dull, the sinker flat. Certain there isn’t a physical reason for the lack of familiar, zippy life on his pitches, Adam Wainwright knows of only one way to revive them and his September.

The veteran starter and the Cardinals agreed that the best way through Wainwright’s persisting “dead arm” sensation this month was to make a start Sunday, as scheduled, but with a limited pitch count. By the end of three innings he’d almost exhausted it, and hours later he still was exasperated by an inability to have his execution match his health and his performance meet his expectations of the moment.

At Dodger Stadium, against a potential October opponent, Wainwright allowed four runs in a season-low three innings and despite sturdy work by the bullpen the Cardinals could not rally, losing 4-1 to the Dodgers.

“This team needs me to pitch well if we’re going to win the World Series; I really need to be a part of it,” Wainwright said. “I’m frustrated. The stuff is not great. … All I know how to do is keep going. That’s all I know how to do. The only way I don’t come out of this is if I give up.”

The Cardinals’ magic number to win the National League Central dropped to three Sunday despite a fourth defeat in six games and second consecutive lost series. The Brewers’ loss earlier in the day assured that the Cardinals can claim the division crown Tuesday with a win at Milwaukee. A win would clinch the season series and seize the tiebreaker for the Cardinals. The Cardinals cannot finish any higher than the third seed into the NL playoffs, as a division winner.

The Dodgers, at 106-47, clinched home-field advantage as long as they are in the NL postseason with their win Sunday.

To Wainwright’s point, for the Cardinals’ season to find its way back to Dodger Stadium for a National League Championship Series, several stalwarts will have to shake free from September slumps. Wainwright is not alone. Like the leader of the rotation, Paul Goldschmidt, the leader for the NL MVP award, has had his performance unmoored this month. A home run shy of leading all three statistical jewels of the NL Triple Crown, Goldschmidt’s OPS dipped below 1.000 after the Dodgers series for the first time since the All-Star break.

As the Cardinals struggled to sustain offense against LA starter Michael Grove, Goldschmidt went 0 for four Sunday with two strikeouts. The Cardinals’ lone run came on Yadier Molina’s RBI single in the second. Goldschmidt’s hitless game dropped his September average to .224 with more strikeouts (20) than hits (17). His slugging percentage is .368 in the month. His stride had been out of sync with his swing at the plate, but that timing has improved in recent games.

“That’s what I talk about when I’m going good — you get a good pitch to hit and hit it hard,” Goldschmidt said. “I haven’t done that enough. It’s not like it’s been zero. But not enough to get on base, drive guys in, and perform. It’s 100% on me. I haven’t done a good enough job. I’m working.”

He spoke fresh from his post-series workout in the weight room.

“Not just sitting back,” he said.

Goldschmidt reaches Monday’s off day with a .317 batting average, third and trailing LA’s Freddie Freeman, at .328. Freeman doubled off Wainwright (11-11) in the first inning Sunday to deliver the Dodgers’ first run. Freeman reached down to get a curveball that didn’t plunge as hoped and golf it into the gap. He scored later in the inning on a bases-loaded walk to Joey Gallo.

As he searched for a snap, a bite, an anything for his pitches, Wainwright walked two batters, hit another Dodger, and allowed two base hits in the first inning. By the end of the second inning, he had faced 15 batters and needed 55 pitches to squeeze one of the top lineups in baseball for three outs. Wainwright’s briefest inning was the third, and LA scored twice on him then — once on another lob-wedge double off a curve.

“I don’t ever like pitching poorly,” Wainwright said. “I hate pitching bad this time of year. I’m glad we have a lead that can somewhat disguise it. We need me to be better. That’s the only way to put it. I know our fans have big expectations and right now I feel like I’m not helping.”

He then echoed Goldschmidt.

Earlier on the trip, Wainwright met with pitching coach Mike Maddux, manager Oliver Marmol, and other coaches to discuss a schedule that would reanimate his pitches. One option presented Wainwright was to skip Sunday’s start and throw a second bullpen session, a more-intensive bullpen.

That approach sometimes is the shock “dead arms” get during spring training — stepping aside from the game and throwing bulk pitches in the bullpen. Having experienced “dead arm” before, Wainwright said he has not responded to rest before and that he doesn’t have the issue in the bullpen. So, they voted as a group and, based on Wainwright’s previous experience, decided to keep him pitching in games.

“We’re not guessing at this,” Marmol said. “I don’t think not pitching is the answer. You could, look, just give the guy a break. After a lot of conversation that’s not what anybody in this clubhouse wants to do, including 'Waino.' He feels like he needs to get a feel for his stuff. He has to rev it up and actually get guys out.”

Wainwright has finished the sixth inning once in five starts this month, and he’s allowed 17 runs (all earned) in 24 innings. The velocity on several of his fastballs dipped a bit again Sunday, and the Cardinals feel that’s an overt symptom of the “dead arm,” not a new norm.

While Wainwright and coaches decided it was best for him to start Sunday, not rest, the schedule now has the final say.

Because of two off days and a rearrangement of the rotation to have Jose Quintana start Wednesday, Wainwright will go a week between starts. He will take a few days to rest. He might throw that extra bullpen session. He will have only one more start this season, one more outing against the Pirates to shake loose September in time for October.

“Right now, I’ve got one more start left,” Wainwright said. “I know about that stuff. I know what people are saying probably. I know how it looks. And I know how it feels. It’s not great. I want it to be better. … All I know how to do is keep pitching and we’ll see how it comes out.”

Hochman: Who should the Cardinals start in the first three playoff games?

A look at the wild-card round pitching rotation.

It's Cardinals' turn to celebrate on their rivals carpet, and they have two chances to win one game and cinch the NL Central crown, their second since 2015.

The Cardinals' Paul Goldschmidt walks back to the dugout after striking out in the sixth inning against the Dodgers on Sunday, Sept. 25, 2022, in Los Angeles.

Cardinals starting pitcher Adam Wainwright, left, chats with pitching coach Mike Maddux, center, in the first inning of a game against the Dodgers on Sept. 25, 2022, in Los Angeles.

The Cardinals' Tommy Edman fields a ground ball hit by the Dodgers' Gavin Lux in the sixth inning on Sept. 25, 2022, in Los Angeles.