On August 19, 2006, Cardinals rookie closer Adam Wainwright struck out New York Mets slugger Carlos Beltran with the bases loaded in the bottom of the ninth and secured a 3-1 victory that clinched St. Louis' 17th National League pennant. Here is the game story by Joe Strauss.

NEW YORK • The ball kept climbing, then hanging and, finally, it fell.

And when it landed a dozen or so feet beyond Shea Stadium's left-field wall with one out in Thursday night's ninth inning, Yadier Molina's six months of struggle magically transformed into an indelible marker within an increasingly improbable season.

Molina, a precocious defensive talent often left to feel self-conscious about his hitting, shoved the Cardinals into their 17th World Series by turning New York Mets righthanded reliever Aaron Heilman's breaking ball into a two-run home run. The blast snapped a 1-1 Game 7 tie and gave the Cardinals a 3-1 lead that nervous rookie closer Adam Wainwright clung to for the franchise's second pennant in three years.

"It stayed there a long time. I didn't know where it was coming down, " Molina said. "When it came down, I just looked into my dugout and saw everybody jumping up and down screaming. It's the best feeling I've ever had."

Wainwright survived consecutive singles to begin the ninth and a bases-loading two-out walk by striking out Cardinals nemesis Carlos Beltran on three straight pitches. The third, a sharp-breaking curve, froze Beltran for a called strike three.

"I'm not a guy who gets nervous. I can remember only a handful of times in my life when I've been really nervous. This was the most nervous I've ever been in my life, " Wainwright said.

Only 24, Molina sped to the major leagues in only 1,044 minor-league at-bats, Among his teammates, only Albert Pujols got there more quickly. Molina struggled to a .216 average while becoming a man of 1,000 stances this season. Only upon reaching the postseason has he found a comfort zone that brought him a .333 average with two home runs, a team-high seven RBIs and the most telling swing of a riveting October.

Chavez, the Mets' left fielder, had denied the Cardinals a 3-1 lead in the sixth inning when he reached over the same wall to steal a two-run homer from Scott Rolen.

"That's a better swing than I've had in the past two postseasons, " said Rolen, who hit the game-winning home run of the 2004 NLCS against Houston Astros ace Roger Clemens.

Against Molina, however, Chavez could only retreat, look up and stare at an advertising slogan proclaiming "The Strength To Be There."

An 83-win team that played less than .500 ball for the season's final five months equaled a major league record for the fewest wins by a team advancing to the World Series.

A team that took two weeks to win its final four regular-season games stands four victories away from its first World Series championship since 1982. All they need to do is go through the 95-win Detroit Tigers.

Molina's lightning bolt against a drizzly Queens night stunned a crowd of 56,357 but didn't come in time to make a winning pitcher of series MVP Jeff Suppan for his seven-plus innings of two-hit ball. It didn't have to. Suppan already had established himself as an October rock by starting the Cardinals' third clinching victory in three years.

"I never thought I'd be in a situation like this, " said Suppan, who has risen from an "innings eater" to a certified big-game pitcher in three years with this current team.

Lefthander Randy Flores took the most significant decision of his career in return for two eighth-inning strikeouts and a ground ball.

A pitching staff that slogged its way to a 4.54 ERA one year after leading the major leagues in the same category snuffed the Mets' powerful lineup with a 3.84 ERA. Rookies finished five of the seven games, including all the wins.

"People will never know all the stuff this team has been through - some of it but not all of it, " remarked pitching coach Dave Duncan. "This has been an extremely difficult year in a lot of ways. But I really thought coming into this series we had a chance if we executed really well and we scored some runs. It's a credit to these pitchers. They did a very good job start to finish."

The Cardinals tied the 1973 Mets for carrying the fewest regular-season wins to the World Series. Whichever manager, Tony La Russa or Detroit's Jim Leyland, wins the title, he will join Sparky Anderson as the only managers in the game's history to win World Series championships in both leagues.

For La Russa, who previously won with the dynastic 1989 Oakland A's, this ride is something more unexpected and, in a way, redemptive. La Russa has long carried Charlie Lau's definition of "a good team" with him. The famed hitting coach once told La Russa a team can't be considered good unless it wins 90 games.

"I thought about it in the car coming down here today, " the manager said. "This was 90 wins. Now we can call ourselves a good team."

"Oh, we've had better teams, " said center fielder Jim Edmonds. "This is not the best team we've had. We've had much better teams. But I don't think we've had a team that's battled and battled like this one. This team may be the one that's best at battling through that I've been on. And we did it when nobody thought we could do it."

Suppan, a guy who reached the Cardinals via free agency three Decembers ago as a 62-75 pitcher, dueled for six innings with enigmatic lefthander Oliver Perez, a Pittsburgh Pirates castoff deemed too excitable and too much an injury risk to ever match his sizable potential.

The Mets reached him for a 1-0 lead with two outs in the first inning.

The Cardinals' first chance came after Edmonds led off the second inning with a single. Advanced to third base by Molina's parachute single to left, Edmonds was in position to score when No. 8 hitter Ronnie Belliard perfectly executed a safety squeeze on a high fastball.

There the game froze as Suppan didn't allow another hit before being lifted in the eighth inning.

The Mets loaded the bases with one out in the sixth when Delgado walked, Rolen threw wildly into the first-base stands on Wright's ground ball and right fielder Shawn Green was walked intentionally.

Adopting a soft, softer, softest approach, Suppan struck out second baseman Jose Valentin as his velocity decelerated through the at-bat. Chavez, poised to join New York's line of October icons, instead ended the threat with a fly ball to center field.

Thursday's performance left Suppan with one run allowed in 15 innings this series. In five NLCS starts for the Cardinals, Suppan has allowed six earned runs in 32 innings for a 1.69 ERA.

10 years ago, Wainwright threw the curve that froze New York 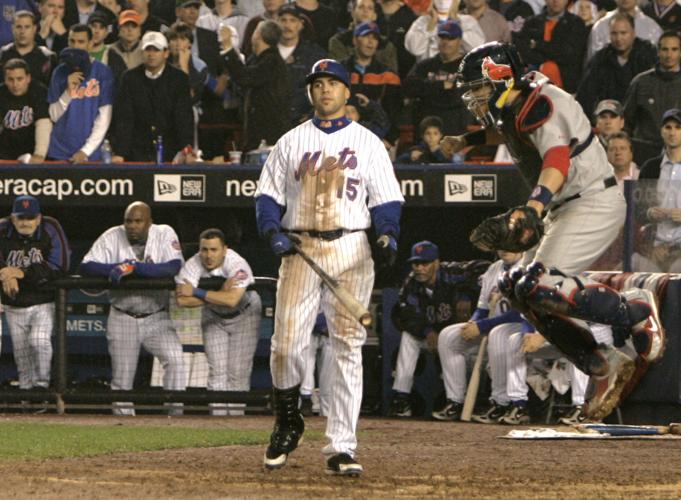 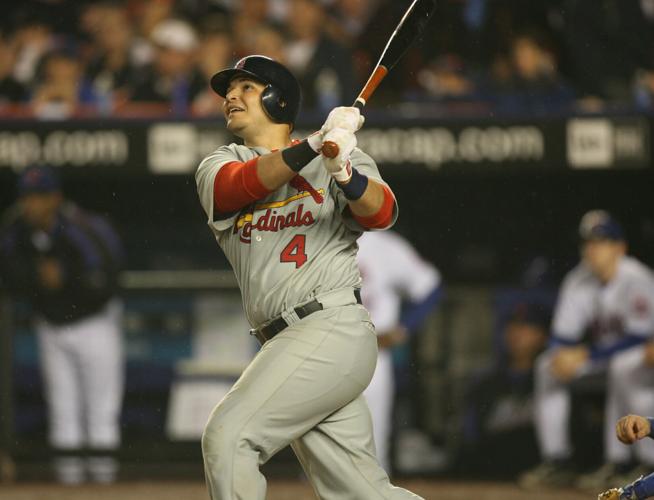 Yadier Molina homers to left in the ninth inning of Game 7 of the NLCS against the Mets at Shea Stadium on Thursday, Oct. 19, 2006. 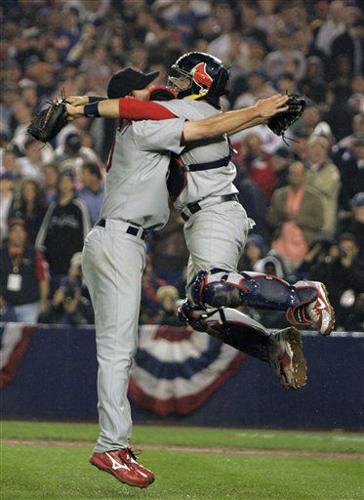 Yadier Molina leaps into the arms of pitcher Adam Wainwright after the final out in the Cardinals' 3-1 win over the New York Mets in Game 7 of the National League Championship Series, Thursday, Oct. 19, 2006. (AP Photo/Charles Krupa)