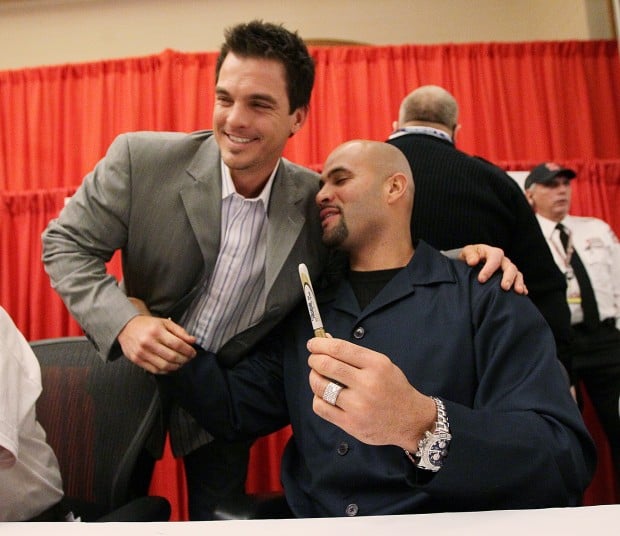 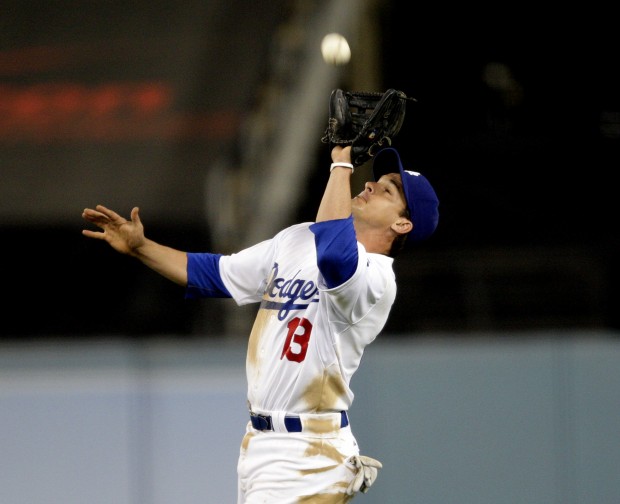 The first fan waiting in line to pledge new allegiance to a former rival gave Cardinals shortstop Ryan Theriot a first-hand reminder of how much things have changed in six months.

The familiar No. 2 for the Chicago Cubs and briefly No. 13 for the Los Angeles Dodgers will don No. 3 for the Cardinals this spring — switching teams, switching positions and, the Cardinals' brass hopes, helping to switch the climate in the clubhouse.

Theriot made his first public appearances as a Cardinal during this past week's Winter Warm-Up. The day before signing hundreds of autographs for the fans, Theriot and his wife attended manager Tony La Russa's ARF benefit concert. There he was recognized by at least one performer as having come over from the dark side. Once cast as the North Side personified, Theriot received a similarly warm reaction from fans when a few confessed to him how they "hated you when you were in Chicago."

"I guess it won't really be real until you get out there and put that uniform on and really play," Theriot said of his baptism in red. "You're just excited to play for a team like this, a team that consistently challenges for a division every year. You want to be a part of that."

Theriot was gone but not forgotten in Wrigleyville.

Nor, apparently, will he be any time soon.

With the Cubs holding their offseason fan celebration on the same weekend as the Cardinals, Theriot was a thorny topic for some former teammates. On the day of the trade to the Cardinals, the shortstop described how he was "finally on the right side" of the Cubs-Cardinals rivalry. He later told a St. Louis radio station that he was happy to be with an organization that emphasized winning World Series championships instead of them being "an afterthought." Asked about those comments at their fan fest, a few Cubs took umbrage. One suggested Theriot practice ducking.

"There's probably a decent chance he's going to feel how hard the dirt is around the home-plate batters' box," Cubs catcher Koyie Hill told the Chicago Tribune. "At least once, maybe once an at-bat. I don't know how long it's going to take. I want to get an apology out of him, and until the whole team, the whole organization kind of feels satisfied."

Theriot shrugged off the Cubs' bluster, insisting they saw a sting to his comments that wasn't intended. Whatever the Windy City fallout, the whole exchange and the Cubs' Benedict Arnold reaction helped illustrate the malleability of a word Theriot mentioned often Saturday: loyalty. Theriot had a prickly start to 2010 when he and the Cubs went to arbitration to determine his salary. The process — already caustic because it pits the team against the player — was further troublesome for Theriot because he had wanted a commitment from the Cubs beyond the one year arbitration mandates.

He wanted loyalty, he said.

"You talk about guys and loyalty," Theriot said in St. Louis. "The deal in Chicago was never about money with arbitration. Ever. It was, for me, more a loyalty thing. I wanted to feel like they really wanted me there. 'We want you to be a part of our future.' And that just didn't really happen. It was one of those things."

Theriot, 31, was arbitration-eligible again this offseason, but he told his agent and Cardinals general manager John Mozeliak early on that they were "100 percent not doing that." Shortly after the Cardinals dealt pitcher Blake Hawksworth to LA for Theriot, the infielder signed a $3.3 million contract for 2011.

The Cardinals sought Theriot to reshape their middle infield and, with Lance Berkman, provide a catalyst for better internal chemistry, as Mozeliak said. His reputation was clear in the comments from his new teammates during Winter Warm-Up. La Russa talked about Theriot as a potential leadoff hitter and prototype "gamer." Albert Pujols called him a 'smart player" and someone "who knows how the game should be played." Others remarked how he "hits behind the runner" and "takes the extra base" and "brings that needed presence" to the clubhouse.

Theriot said it's a role he values, one he saw Mark DeRosa, a charismatic infielder who had a short turn as a Cardinal in 2009, take in the Cubs' clubhouse. Theriot told a story Saturday about how he first realized the value of team chemistry. His college coach, LSU's Skip Bertman, pulled each player into his office during the season and asked a simple question: If you were dangling off a cliff, what teammate do you want holding the other side of the rope? "Hold the rope," became one of the team's mantras that season.

"My point is we all trusted each other with that same equal deal," Theriot said. "That's kind of how I approach it. You want to have that trust in your teammates. You want your teammates to trust you. What it does is it develops that great friendship. You start to see those late-inning rallies, you start to see guys genuinely get excited."

What began with the acrimonious process of arbitration continued into the season as the Cubs sank in the standings and Theriot found himself relocated to second base. Theriot did not make a start at short after May 6, not even after being dealt to the Dodgers at the non-waiver trade deadline. The Cubs indicated that Theriot had become limited at his position. The Cardinals disagreed, installing him as the starting shortstop the day they traded for him.

Advanced defensive stats paint Theriot as an above-average shortstop the past three seasons. Cardinals coach Jose Oquendo likened him over the Winter Warm-Up weekend to David Eckstein when he joined the Cardinals.

Theriot welcomes a familiar view of the field.

"It's weird. Just being on that side of the infield makes you a little more comfortable," Theriot said. "I guess that's because I've played there since I was a little kid. When I was in Chicago and I was moved from short to second … I don't think it really (was) justified. I didn't think that I didn't perform well enough at short anymore. I didn't feel like that was the case at all. I can still play short."

Theriot connected his drop in offensive production, in part, to his shift in position and his unsettled season. A top-of-the-order hitter and starting shortstop for the Cubs' back-to-back division champs in 2007 and '08, Theriot ended up batting .270 in 2010. He had career lows in on-base percentage (.321) and slugging (.312).

His jersey isn't the only number he's out to change.

"It was definitely a different year," Theriot said. "There were a ton of variables last year. Bottom line is that wasn't the type of season I want to put up, that I'm capable of. I know that. So you work extra hard and you get back to where you want to be — which is winning. I could hit .250. But if we win, I'm fine with that."

Is Jim Edmonds a Hall of Famer?

Both sides talking contract; as an added bonus, they're talking out of both sides of their mouths

The righthander, who was plagued by shoulder problems last year, said in a statement that he preferred retirement to spending the final year of his contract in the bullpen.