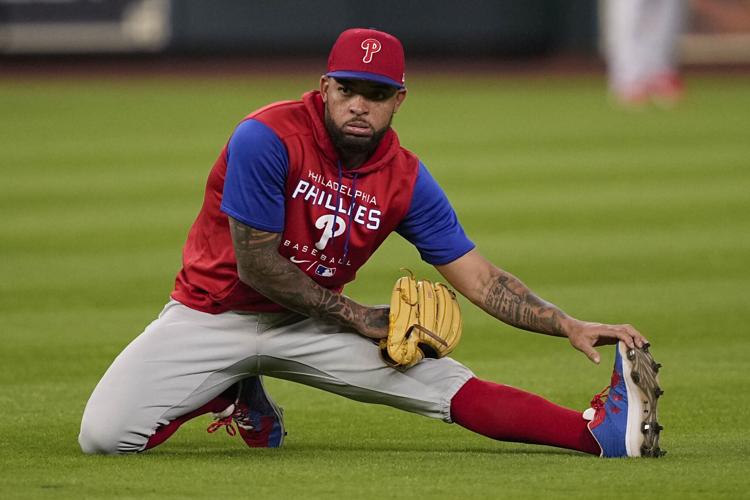 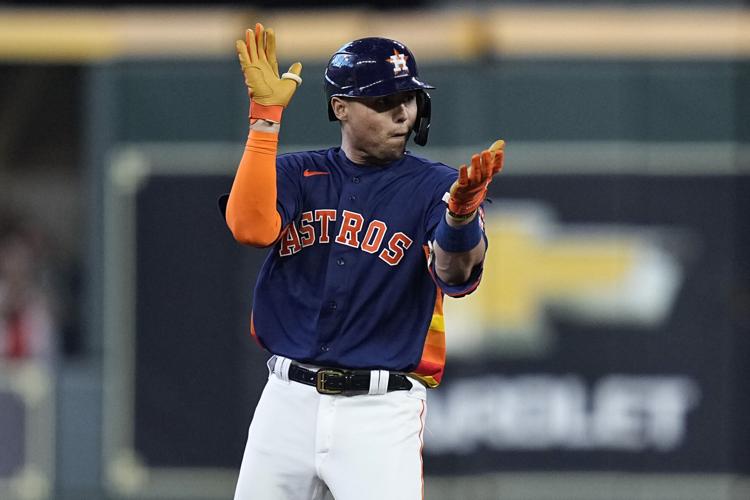 The Astros' Aledmys Diaz reacts after his double against the Seattle Mariners during the sixth inning in Game 2 of an American League Division Series baseball game in Houston, Thursday, Oct. 13, 2022.

PHILADELPHIA — When he caught the out that sent his new team hurtling past his former team, his first team, the only team he had previously known, Phillies infielder Edmundo Sosa felt something tug on his elation.

That popup he gloved near third base to eliminate the Cardinals hit close to home.

“I was excited we won the game, excited we’re going on to the next step, but I know that St. Louis, for me — I have all the respect,” Sosa said this week as his Phillies hosted the middle games of the World Series. “The fans of St. Louis took care of me, loved me, welcomed me. It’s my baseball home. I’m happy that we won the game. But I felt a little bad because St. Louis is in my heart, always.”

When dealt by the Cardinals in July to Philadelphia, Sosa described a moment of uncertainty, the zero-gravity sensation of switching from the familiar to the unknown and not sure which direction it might send his career. He doesn’t have to look far this week for the potential. Not only is his new team in the World Series, leading two games to one before Wednesday’s Game 4, but across the diamond, starting in left field for Houston is someone who knows the feeling — and created quite a career after it.

Aledmys Diaz, 32, and Sosa, 26, share more than being former top shortstop prospects for the Cardinals. They were both examples of the Cardinals’ expanded international presence — Sosa from Panama, Diaz from Cuba. They both outplayed an incumbent to become the Cardinals’ starting shortstop. Diaz hit his way to being an All-Star in 2016 for the Cardinals, Sosa the Cardinals’ playoff shortstop in 2021. Both were traded within 10 months of being the starter. Each deal was made to make room at short for Paul DeJong.

Both have deeded the Cardinals a corner of themselves.

“I always will have the Cardinals as part of my heart,” Diaz said. “I feel like a lot of Cardinals feel that way. But that’s part of life sometimes, things change. You have to find another opportunity.”

Traded to Toronto after the 2017 season, Diaz spent a year there at shortstop before being moved to the Astros, who already had a star shortstop in Carlos Correa. Jeff Luhnow, a former Cardinals executive who was Houston’s general manager at the time of the trade, told Diaz they had a new role in mind for him: utility. He would learn new positions and in return he would play for a championship contender. Diaz said the instruction he got in the Cardinals’ minor leagues, specifically from Mike Shildt, prepared him “as a professional” for that change. He stopped chasing the starting job he once had with the Cardinals and learned to embrace a different role.

His start in Game 4 on Wednesday was his second of this World Series. It is his third World Series in four seasons with the Astros.

“Everything changed,” Diaz said. “Priorities started to change. You want to find a way to be a part of a winning culture, a winning team. I feel sometimes when you’re used to winning, it’s tougher to get away from that. Sometimes you want to be an everyday guy, and you think that’s everything. But if you can have a chance to be a on a winning team, you need to think twice.”

Sosa left the 2021 season believing he would have a chance for the best of goals — being the everyday starter at shortstop and part of a winning team.

He decided not to play winter ball this past offseason, focusing instead on strengthening and readying his body for the challenge of being the Cardinals’ shortstop for an entire season.

By the end of spring, it was clear he would not be.

Sosa started four of the Cardinals’ first 15 games, appeared in only eight of their first 20. He went on a weeklong jag in May with six starts in seven games and eight hits. Then just as quickly as the at-bats flowed, they ebbed. Tommy Edman had taken over at shortstop — the latest to take over at shortstop — and by the end of July Sosa’s average hit .189. DeJong’s return from Class AAA after a reboot meant Sosa’s minimal playing time was likely to recede to none.

“I worked so hard the whole offseason because I wanted to be prepared to be the everyday (guy),” Sosa said this week in the Phillies’ dugout. “I put in all the work to be, but it’s OK. It’s baseball, right? So you keep working. They needed a pitcher. They traded me to Philadelphia. And Philadelphia gave me the opportunity to play baseball again, you know?”

In 25 games — limited due to injury — Sosa started regularly, hit .315, and had a burst of 10 extra-base hits in 54 at-bats. In the postseason, he’s been part of the Phillies’ good-hands team, taking over in late innings to improve the defense.

He caught the final outs of both playoff wins against the Cardinals.

Diaz was the last shortstop before DeJong to start 100 games there for the Cardinals. An All-Star in 2019 and owner of the Cardinals’ record for homers at shortstop, DeJong has struggled since with injuries and inconsistencies contributing to a .196 average and a .631 OPS in his past 235 games. Edman thrived defensively at shortstop after DeJong’s demotion to Class AAA, and against the Phillies in the wild-card series Edman started where Sosa had been the year before in the wild-card game.

Already weeks into their offseason planning, the Cardinals are again exploring their options at short — including buying time before prospect Masyn Winn arrives. In the 11 seasons since their last World Series title, the Cardinals have had six different players lead them in starts at shortstop. Only DeJong and Jhonny Peralta have done it in consecutive seasons. Now they’re discussing where to move next.

Two recent options have moved on.

“Sometimes you have to be patient with players,” Diaz said. “Sometimes it takes a couple of years and then they become the player who is going to help the organization win. Sometimes it’s another organization. Hopefully, you find some home like that.”

Mancini ‘stands up’ for Minor

For Houston outfielder Trey Mancini, Major League Baseball’s annual shows of support for “Stand Up to Cancer” and the moment during a World Series broadcast where players, coaches, and fans hold up signs with the names of loved ones will resonate.

He’s been a name on several of those signs.

Mancini missed the 2020 season as he received chemotherapy to battle Stage 3 colon cancer and returned 2021 to hit 21 homers, participate in the Home Run Derby, and win the American League’s Comeback Player of the Year award. At the 2021 All-Star Game, at least two peers had his name written on their “Stand Up to Cancer” signs. Before Wednesday’s Game 4, Mancini revealed the name he wrote on his sign: Ryan Minor.

The former Oklahoma basketball great and Orioles infielder who started at third base the day Cal Ripken Jr. did not, Minor was Mancini’s manager at Class A. He was recently diagnosed with Stage 4 colon cancer.

“Same kind of cancer I had,” Mancini said. “So, I’ve been talking to him and just wanted to let him know. I was thinking about him, and I know what he’s going through.”

The pitching matchup for Game 5 will be a rehab reunion of sorts and possibly the last appearance by both starters for their current teams. Houston’s Justin Verlander and Philadelphia’s Noah Syndergaard shared a trainer and had overlapping recoveries from elbow surgery before this season. Both are also free agents in a few days. “I think it’s going to be really cool to have the opportunity to go toe-to-toe with Justin Verlander,” Syndergaard said. “We started off the year facing off against each other. Just the whole opportunity kind of gives me chills.” … The Phillies’ record-tying five homers in Game 3 secured their 22nd playoff win all-time at Citizens Bank Park. They are the third team to get to 20 playoff wins at their ballpark within 29 games, and the Cardinals did it twice, at Busch Stadium II (21-8) and current Busch Stadium (20-9).

Houston has two home games to win one and claim its first championship since 2017's tainted trophy. But Phillies have been preparing for a Game 6 retort.

The Astros' Aledmys Diaz reacts after his double against the Seattle Mariners during the sixth inning in Game 2 of an American League Division Series baseball game in Houston, Thursday, Oct. 13, 2022.